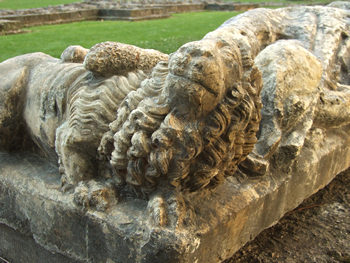 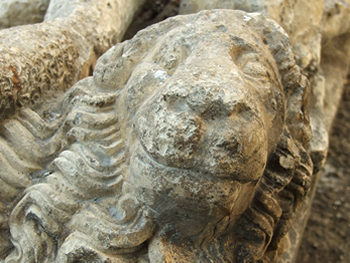 These grounds are full of old stone sarcophagi and other stone fragments, and of late they’ve been moved around a bit. This carved piece was noticed this spring, placed near the former bowling green near the abbey ruins. It appears to be a memorial from the top of a tomb, with a recumbent figure with feet resting on a lion. The effigy is a bit worn and indistinct, but the lion at its feet looked very handsome in the evening sunlight. It doesn’t look at all fierce, but instead is a rather smiley lion.

The magnificent creature has since disappeared – I thought perhaps it had got a bit tired of having those feet resting on it, and had run off … but I hear that the lion is over at the Castle Museum this summer, playing a part in the ‘Knights, Castles and Chivalry’ event.