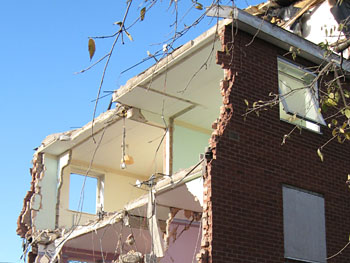 Demolition work has begun on Bootham Park Court, the nurses’ accommodation alongside Bootham Park hospital. I can remember these houses and flats being occupied, but they’ve been empty and boarded up for some years now. Like all empty buildings they’ve been the subject of letters to the local press.

They date from the late 1970s, apparently. They’re not beautiful in any way – in fact they’re probably the most boring buildings I’ve ever taken photos of. I did take a photo of them before demolition began, but it was too boring to include. I apologise about the boringness of these, but this demolition deserves recording, because 1) it’s rather controversial and 2) a lot of people must have lived here over the years, and there will be people who had happy or significant times in these buildings now being reduced to rubble. 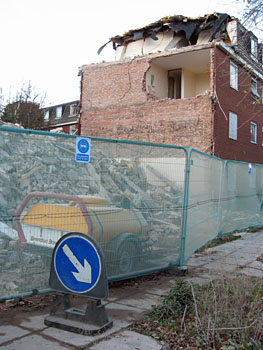 Discussions did take place about the possibility of bringing the accommodation back into use. I’ve just read through the planning application information and, assuming it’s an objective representation of the facts, I can see why this wasn’t feasible.

We have homeless families needing accommodation, but we can’t just take the boards off the boarded up windows and say ‘here you go then, live here’. It would be nice perhaps if it were that simple, but it ain’t. It would take £5-8 million to refurbish the buildings to the standard required. Not really worth it, is it. 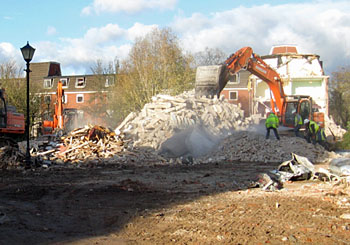 They’re NHS buildings, and the NHS no longer has a need for this kind of on-site accommodation. Which is why they’ve been left empty. The land they’re on is right next to Bootham Park (psychiatric) hospital, and just across the narrow lane behind them is our main general hospital. So this soon to be cleared area is in a very convenient location for new health service facilities, which will be built here at some point in the coming years.

Yes, it’s a waste of resources to pull down relatively new buildings, but then we’re always wasting resources. We seem to have a fair few late-20th century buildings which ended up being not fit for purpose rather rapidly: the ‘Splash Palace’ toilet block and the Peasholme Centre spring to mind. Both also cleared out of the way in recent years. It remains to be seen whether the vast number of apartments constructed during our recent building boom are fit for purpose in a decade or two.

Meanwhile, comments are welcome on Bootham Park Court and its demolition, particularly from anyone who lived here.

The Press, in 2009: City council in talks with York Hospitals NHS Foundation Trust over future of former nursing flats

Lisa @YorkStories is the creator, administrator, and writer of content on www.yorkstories.co.uk. She can be contacted on this link or via Twitter, @YorkStories
View all posts by Lisa @YorkStories →
Tagged  Bootham, Bootham Park, demolition
To link to this page's proper location please use the > permalink