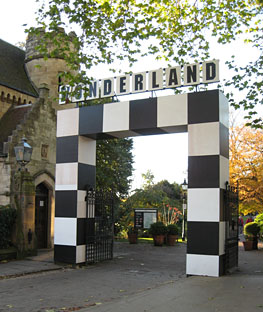 So Illuminating York is over for another year. The organisers have received a lot of ‘feedback’ (complaints) about the main event, Wonderland. Here’s its entrance, constructed around the gates of the Museum Gardens.

Today’s big story locally is of another event which has left many demanding refunds – a bonfire night event on the Knavesmire. Like Wonderland, it was a gated event, open only to paying customers booking in advance.

It’s years since I went to a fireworks display. Aside from the one I watched from a window in 2005, the fifth of November I particularly remember was spent in the middle of a massive tightly-packed crowd of people standing in Clifford Street, in front of the fire station, watching the city’s firework display over Clifford’s Tower, in the early 1990s.

I didn’t give a thought to who was paying for it – too young to care. These things just happened, were provided.

Last year when I dashed through the illuminated city, from a free event in a lit-up Dean’s Park to another free event by Clifford’s Tower, I did think about the amount of funding needed to stage events like these.

I’d ignored Illuminating York until last year. The fireworks display was for us, the residents. The relatively recent Illuminating York, though held at a similar time of the year, didn’t feel like it was for residents. It was designed to bring in tourists and visitors. But last year I read about the event in Dean’s Park, and liked the sound of that, and went along. The following night I visited All Saints church and the NRM. All excellent memorable free events lighting up that particular autumn weekend.

What I remember most about Illuminating York 2011 was the sense of community, and of a joined-up city. Being in Dean’s Park and then soon after in front of the Castle Museum, and in both places knowing that people I knew were there (even if I couldn’t find them in the crowds), and that it wasn’t just visitors to the city standing on the grass in front of the Castle Museum but the people who lived here. Perhaps including those who had worked in the famous York factories of our more recent history, making chocolate, or railway carriages. The history giving me my own ‘sense of place’, rather than Guy Fawkes, Dick Turpin, etc.

The open-air city centre events were something we could all wander along to. Personally I found Dean’s Park more memorable, though there we were listening rather than watching. The Castle Museum display is what most people remember, and it was on the strength of that that so many people came back this year.

In 2011 Illuminating York seemed to have gelled into a big celebratory event for everyone, residents and visitors together. Those who pre-booked, travelled and planned alongside those who lived here and wandered along from a last-minute decision.

The scaling down of cultural/arts events seems inevitable in a time of so many cutbacks to important services. So it wasn’t surprising that this year’s illumination event seemed to have shrunk (though the advertising suggested it would be bigger or better).

Illuminating York 2011 might have seemed like a perfect example of an arts/cultural event creating a sense of social cohesion, but those days are no more. The lights have been taken in, behind railings and fences, and you need a ticket to see them.

I hope other residents saw last year’s events, and enjoyed as I did the brief, inclusive time of free access to all. We’ve perhaps seen the end of that wonderland.

Lisa @YorkStories is the creator, administrator, and writer of content on www.yorkstories.co.uk. She can be contacted on this link or via Twitter, @YorkStories
View all posts by Lisa @YorkStories →
Tagged  Illuminating York
To link to this page's proper location please use the > permalink