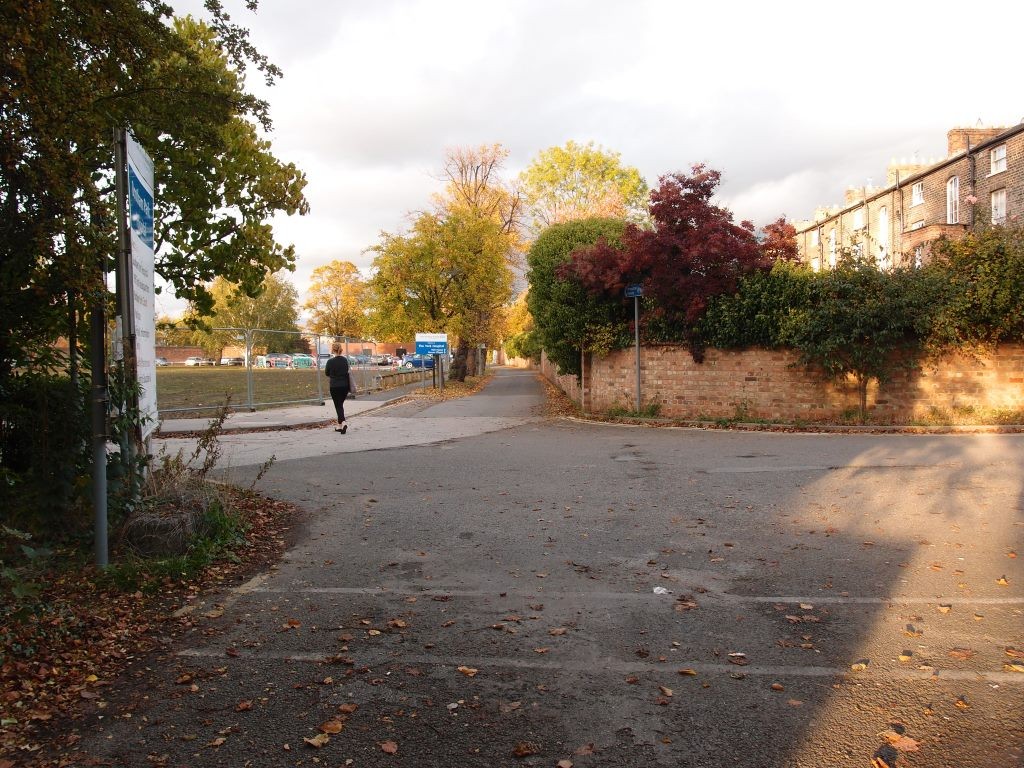 If you carry on walking along the road through Bootham Park, on our imaginary walk of the previous page, from the Bootham entrance, past the ‘gala field‘ and following the road/path as it bends to the right, you’ll get to the eastern boundary of Bootham Park, pictured above. The exit to Union Terrace and Clarence Street is on the right.

But we’re not going off to the right — we’re staying here in Bootham Park, looking at how it all fits together. And on this page we’re looking at a particular area. The woman pictured above is walking by one of its corners.

It used to have buildings on it, housing for nurses and doctors, a 1970s development called Bootham Park Court. This photo shows the buildings being demolished, late 2012. I wrote about it at the time. 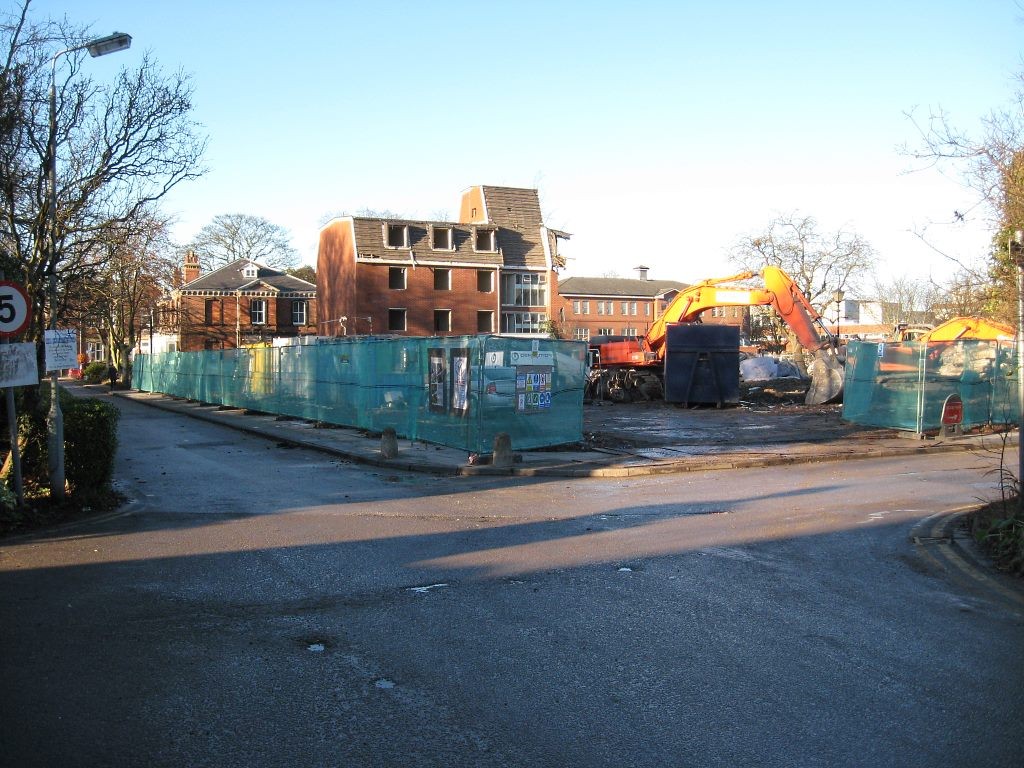 If you’re walking along Bridge Lane, heading towards town, there’s an opening on your right in the brick wall boundary of Bootham Park Hospital, and for the last few years it has offered a new and rather cheering view of the Minster, across what was Bootham Park Court. A view previously blocked by the accommodation blocks.

After the demolition and clearance of the site I always looked through here when passing, to get the glimpse of the Minster, and occasionally stopped to take photos. The view changed in subtle ways through 2015. 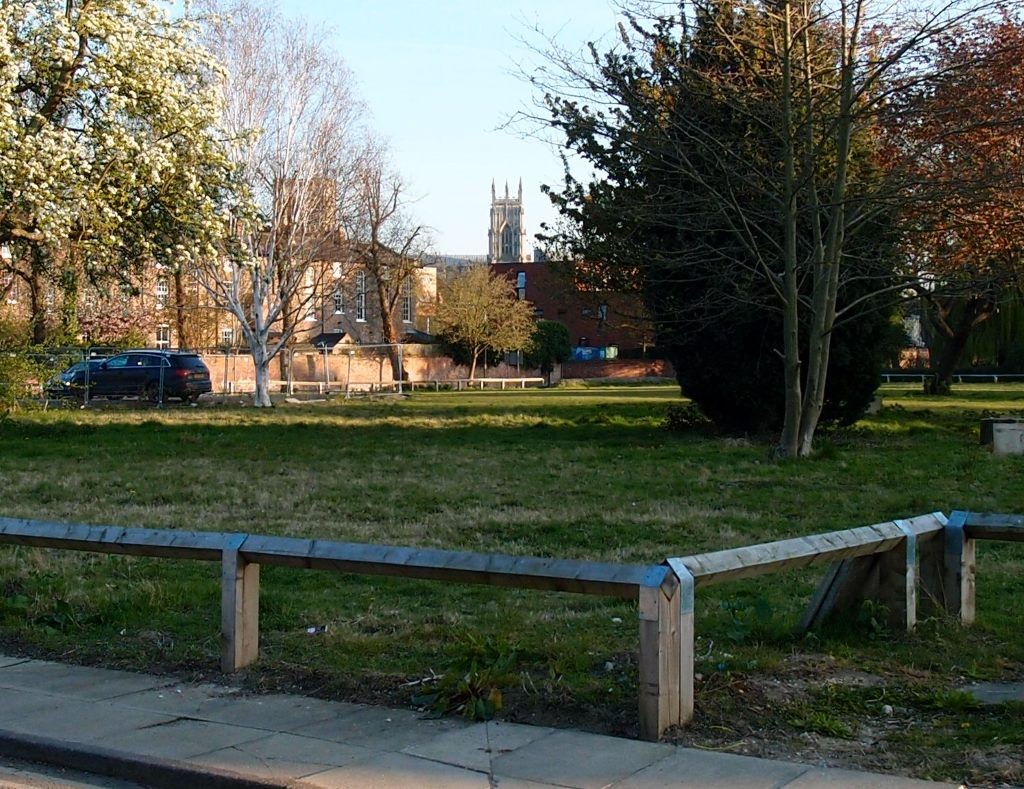 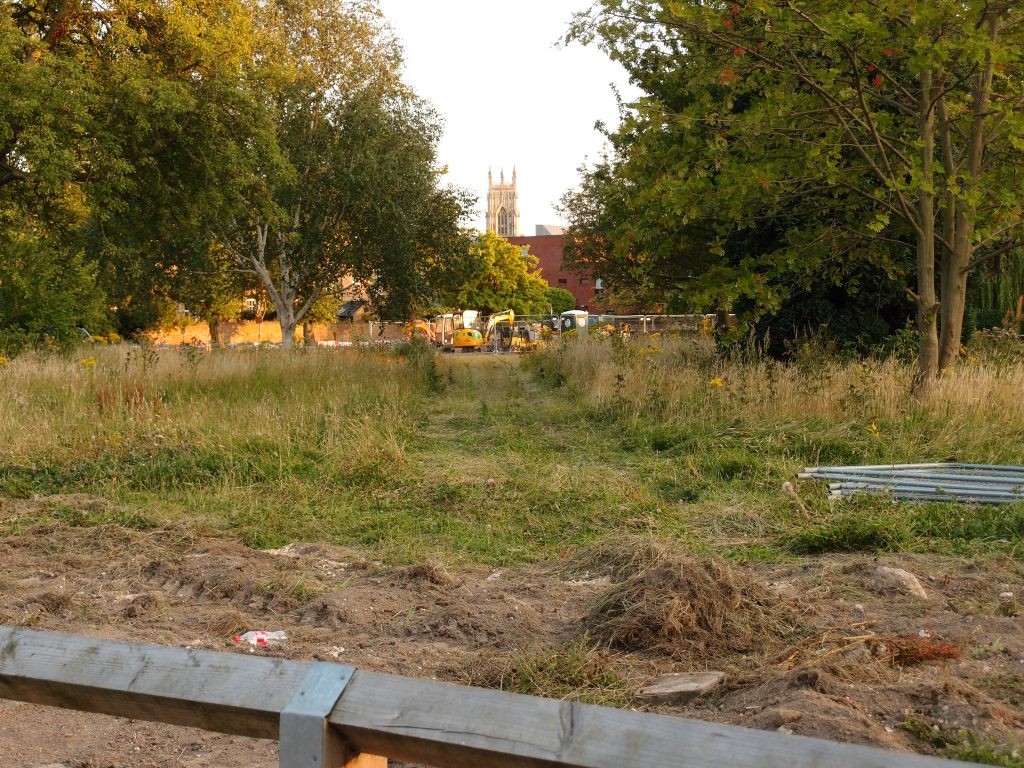 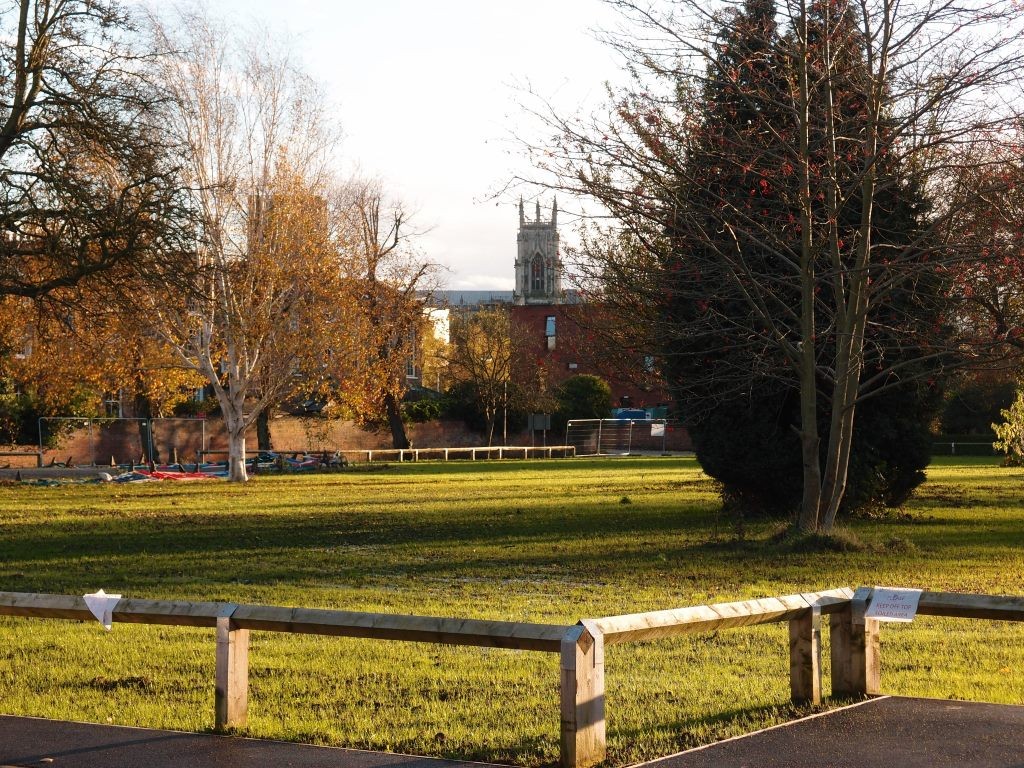 There were a couple of interesting things about this piece of land, apart from its Minster view through the trees.

Firstly that it was fenced off, for no apparent reason. Many of us ignored the fences and cut across it diagonally to get from the opening in the boundary wall to the Union Terrace/Clarence St exit by the most direct route. The fence was low and we just stepped over it. A pleasing desire line formed through the long rough grass, as shown in that photo from August 2015, above.

The other noticeable thing was that it was an ’empty’ piece of land in a city where any piece of land so close to the city centre seems unlikely to be empty for long.

I’d read that it was going to be reused by the NHS Trust, and I wondered when that would happen.

After the shocking and rather sudden announcement that Bootham Park Hospital itself would have to close, I wandered through the grounds of Bootham Park on the evening of 1 Oct 2015. And noticed that the old Bootham Park Court site had been stripped of most of its vegetation (mainly grass), and covered with topsoil, which was then reseeded with more grass. 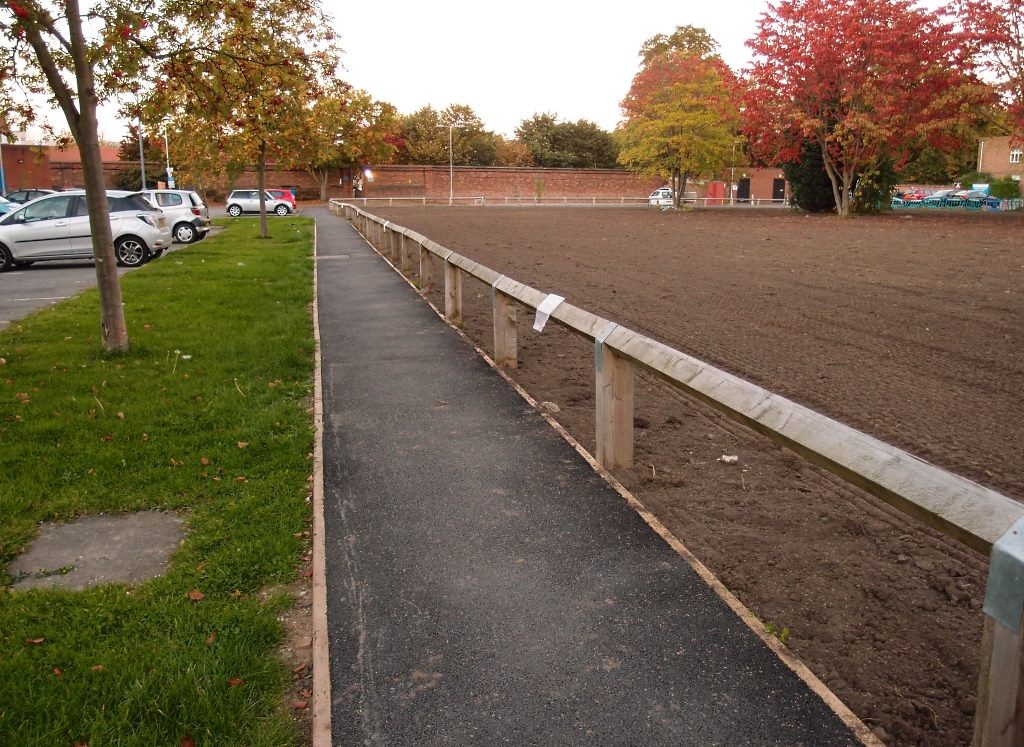 I was quite surprised to see this, in the circumstances. The hospital itself had closed because apparently bits of ceiling were falling off and it had numerous problems too expensive to fix, but they’d managed to organise the tidying of this bit of land right next to it, a not exactly urgent problem. In fact not a problem at all, rather a nice wild area developing. It even had rose bushes on it. Which appear to have been removed, for no apparent reason. 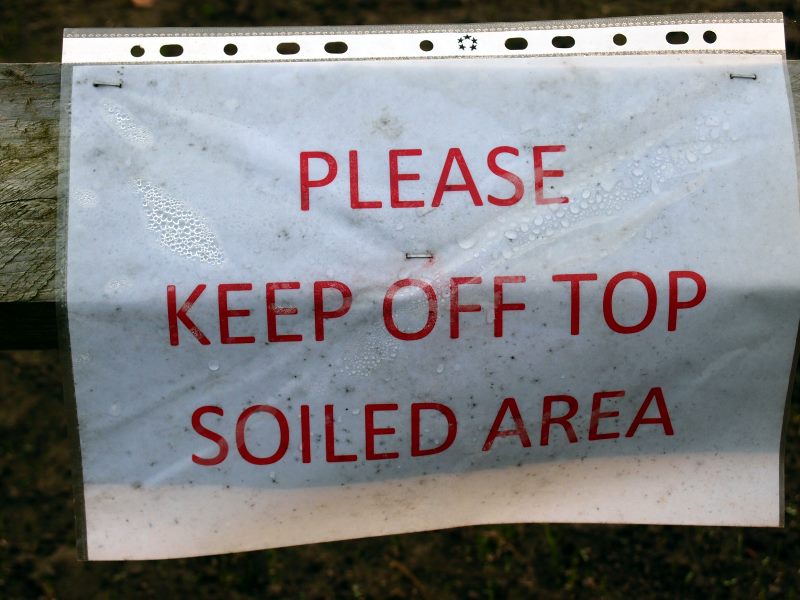 I noticed a fruit tree dropping its fruit to the ground, inside this fenced-off area. 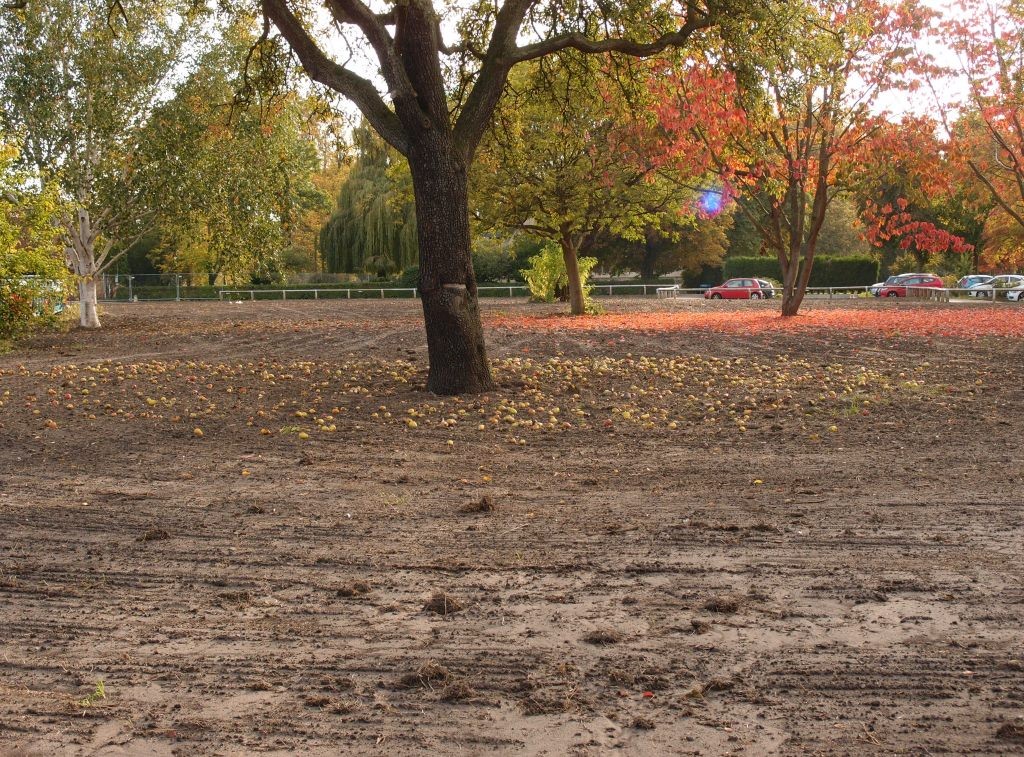 Which seemed a bit wasteful.

But perhaps just another bit of waste to add to what appears to be an awful lot of waste, wasted resources.

The temporary ‘landscaping’ of this area was presumably thought to be necessary because that’s what was agreed in the planning application a few years back. After the demolition of the buildings of Bootham Park Court the site had to be tidied up. So money is being spent on that.

But it seems reasonable to wonder, if the old hospital buildings really aren’t fit for purpose and are unsustainable, perhaps something could be built here instead, on what used to be the Bootham Park Court site?

A point raised by Dr Bob Adams, reported in the Press:

“York deserves a state-of-the-art unit near the acute hospital, near the centre of the city, with easy access to transport hubs. Why should mental health take second best?”

Apparently the site isn’t flagged as surplus, which is why it can’t be considered in the ‘possible replacement’ sites, while sites much further out, away from the city centre, are being considered.

Does it make sense to you, dear readers?

My Google map showing the location of the site

There’s a petition to use the Bootham site rather than the other suggested sites: more info here. I’d urge everyone to sign it.

Mental Health Action York ‘formed to challenge the closure of the city’s only NHS mental hospital, Bootham Park’, led by Dr Bob Adams, quoted above. For more information see this article in the Press, and @ActionYork on Twitter
Also on Facebook (needs login to view)

Healthwatch York are asking for your views (by 12 Feb), see this piece in the Press