Castle Gateway and beyond: from a different perspective, 2007 and 2017 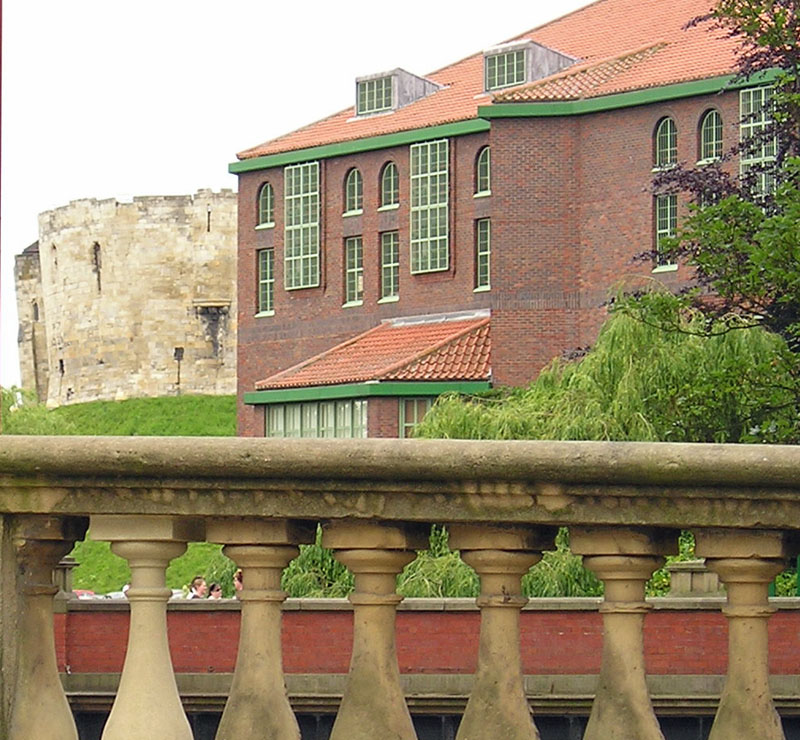 On the previous page, after serious thoughts, and not wanting to ‘close low’ on this series of pages on the Castle Gateway area, I thought that it might be nice to take imaginary flight, picturing perhaps one of the city’s pigeons, so that we didn’t have to concern ourselves with the mundane issue of crossing the busy road of Tower Street.

Flying a short distance we find ourselves at the multi-storey car park attached to the Coppergate Centre. From up there on its higher levels we get a bird’s eye view of the area around it. Ten years ago I took a few photos from up there, and revisited this summer to capture similar views ten years on.

Here’s the first 2007 view, looking over part of Piccadilly: 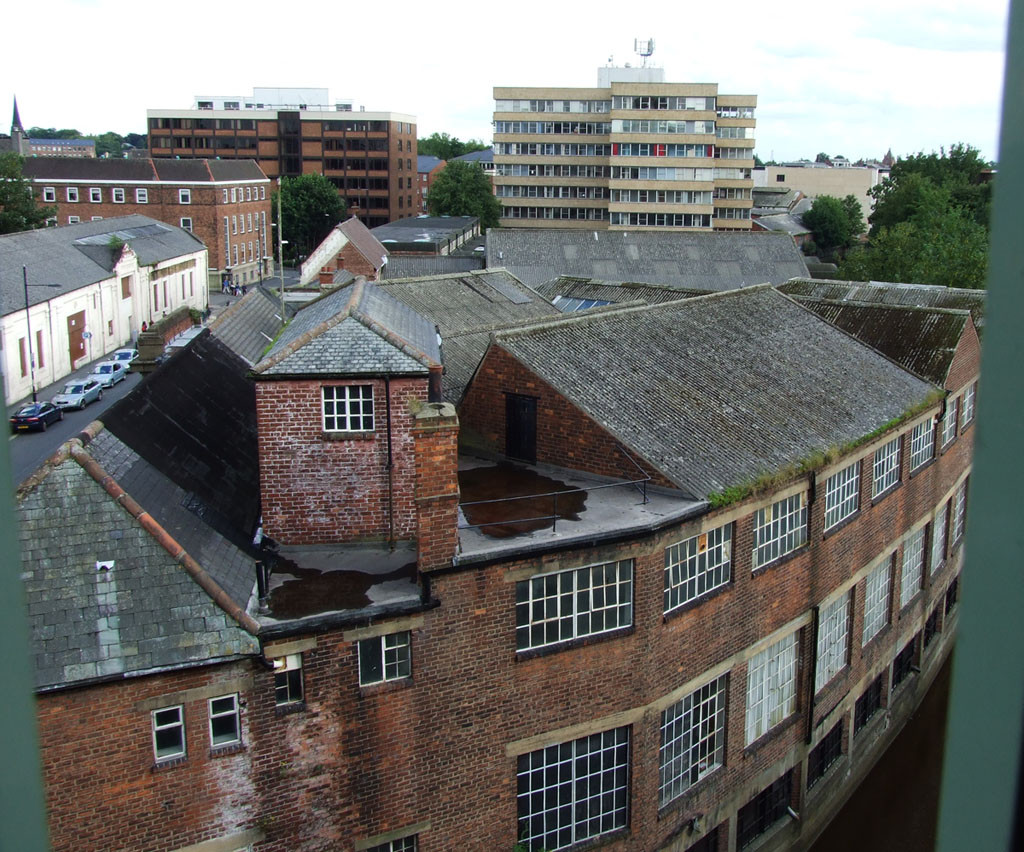 Note the building in the foreground, with greenery growing from its gutter, a former car showroom apparently. To the left, a little further back, the old Reynard’s Garage (and former Airspeed factory). Also prominent is Ryedale House. 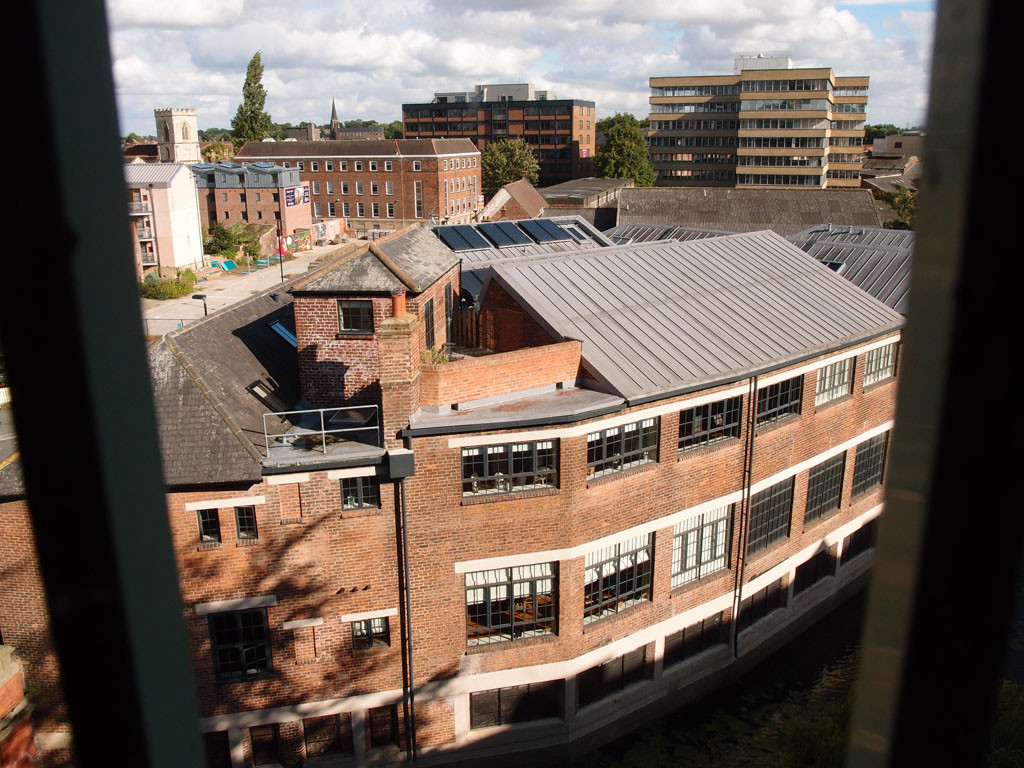 Ten years on, the building in the foreground looks smart and clean. It’s now known as Piccadilly Lofts. I always liked that building, and it’s pleasing to see that it’s still here alongside the Foss. Also striking, I thought, in the photo above, is how Ryedale House looks better now it’s empty, without the various colours of blinds and curtains at its windows. Though there were plans to convert it to residential accommodation there’s been no progress on that front.

The other major difference is that the Reynard’s/Airspeed building on Piccadilly has been demolished. As previously mentioned, the cleared site is to be home to Spark:York, housed in shipping containers.

The former Reynard’s garage is more prominent in this closer view of Piccadilly, again from summer 2007: 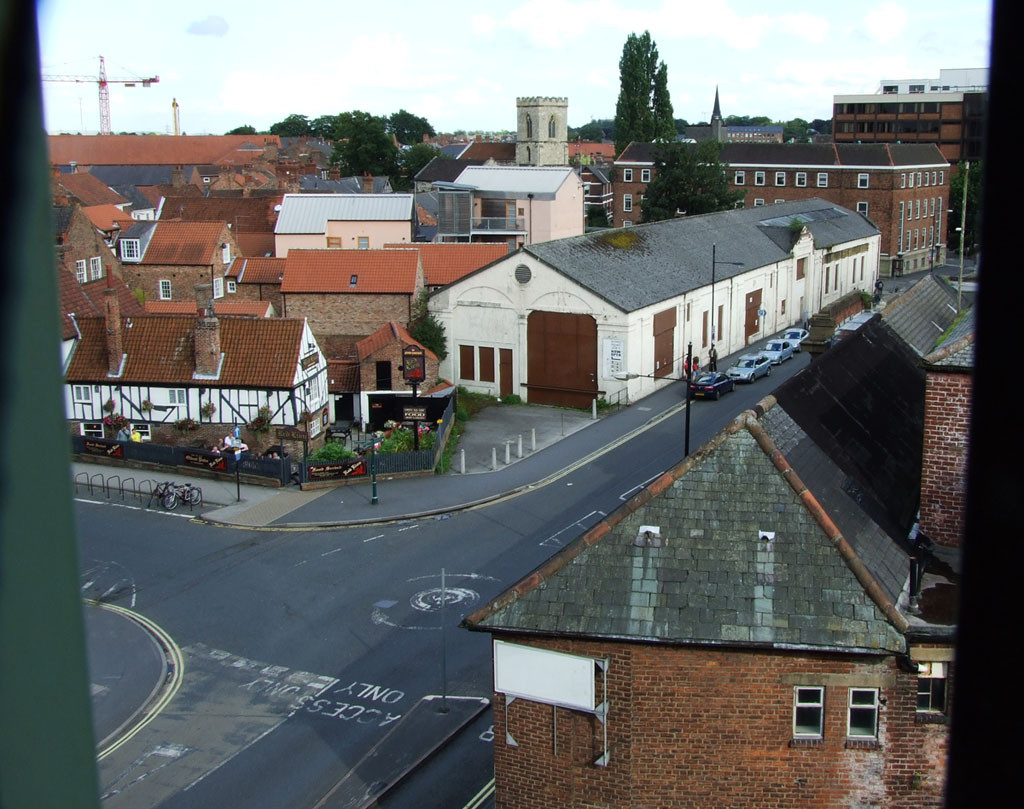 Piccadilly and the entrance to Merchantgate, view from the multi-storey car park, July 2007 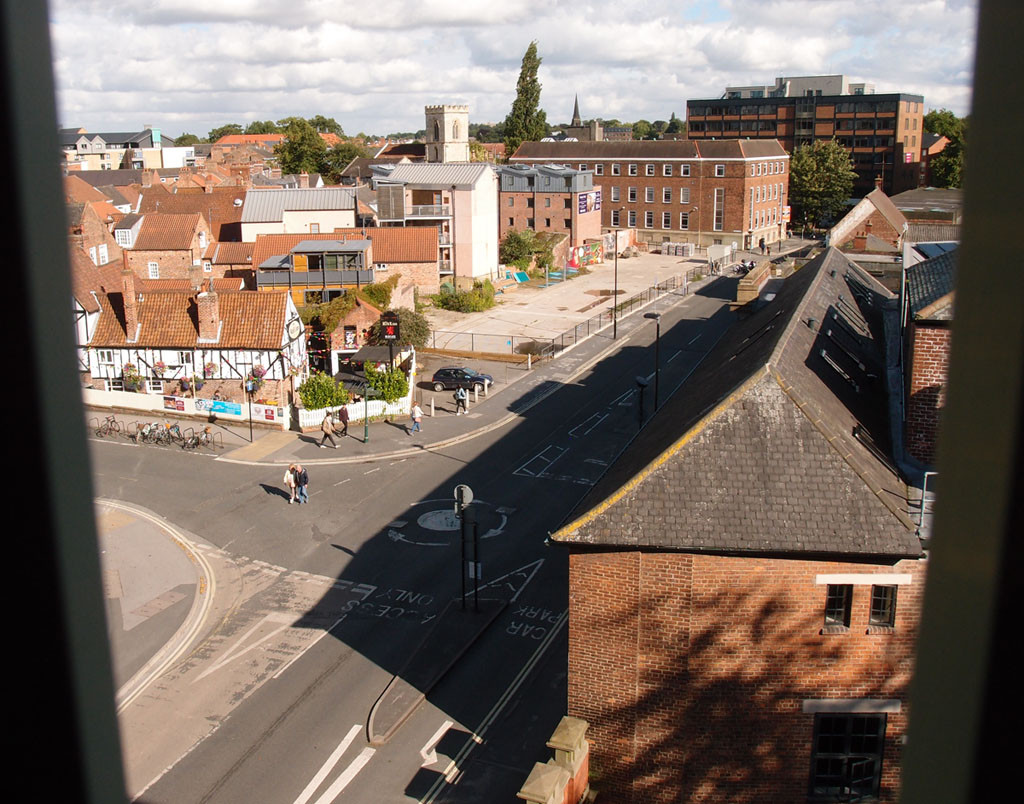 In 2017, there’s an open area where the Reynards/Airspeed building used to be, and on the back wall of it a colourful mural is visible.

We’re close to the Foss, and moving to the left, we’re looking out over and along it, upstream. In 2007: 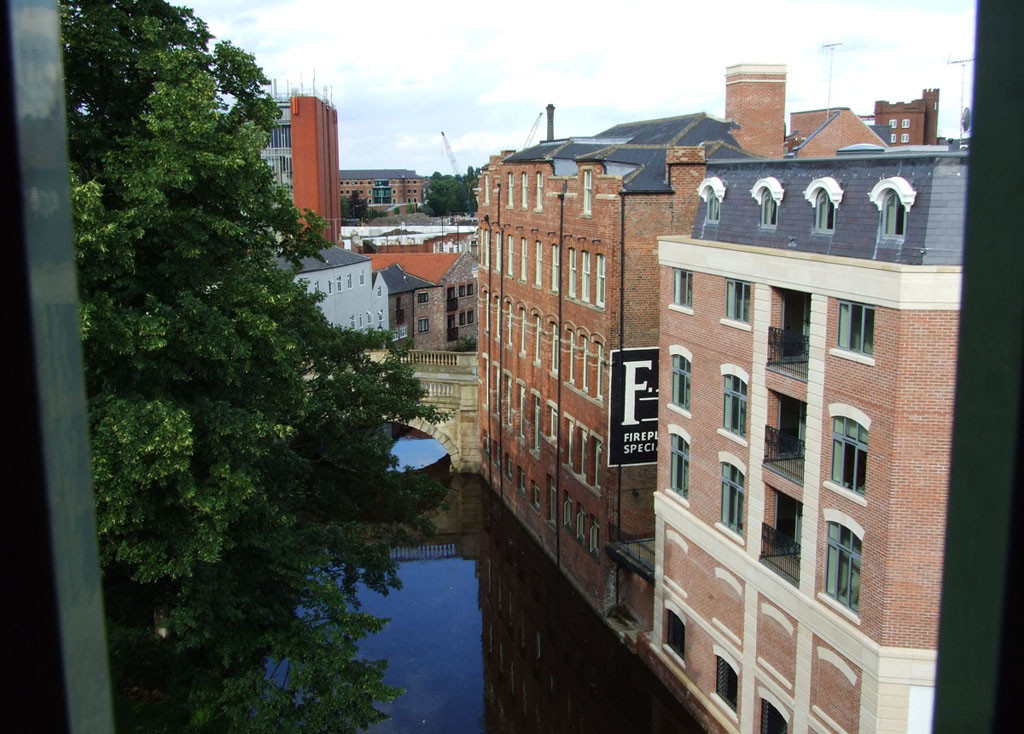 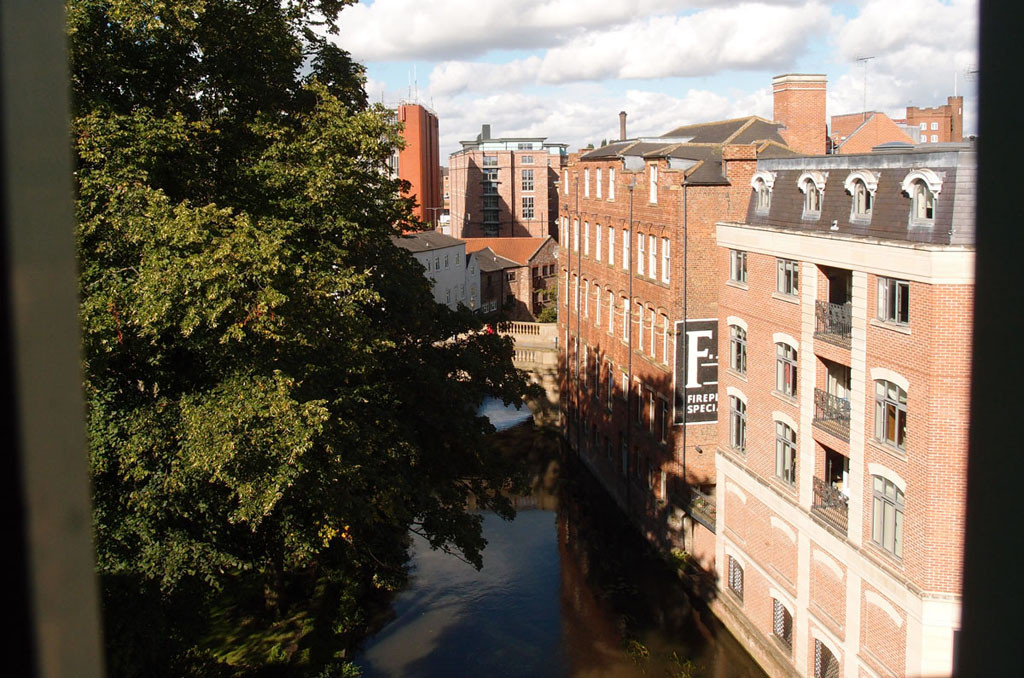 The main difference is the new large St John Central building, student accommodation, in the Hungate development area, closing the view along the riverside towards Peasholme Green/Foss Islands. But the ‘Destructor’ chimney is still a landmark, as is Rowntree Wharf, to the right.

We’ve now moved beyond the ‘Castle Gateway’ area, as it has been defined. Here’s another view from ‘on high’, in 2007, taking in the wider landscape, to the Walmgate/Navigation Road area. 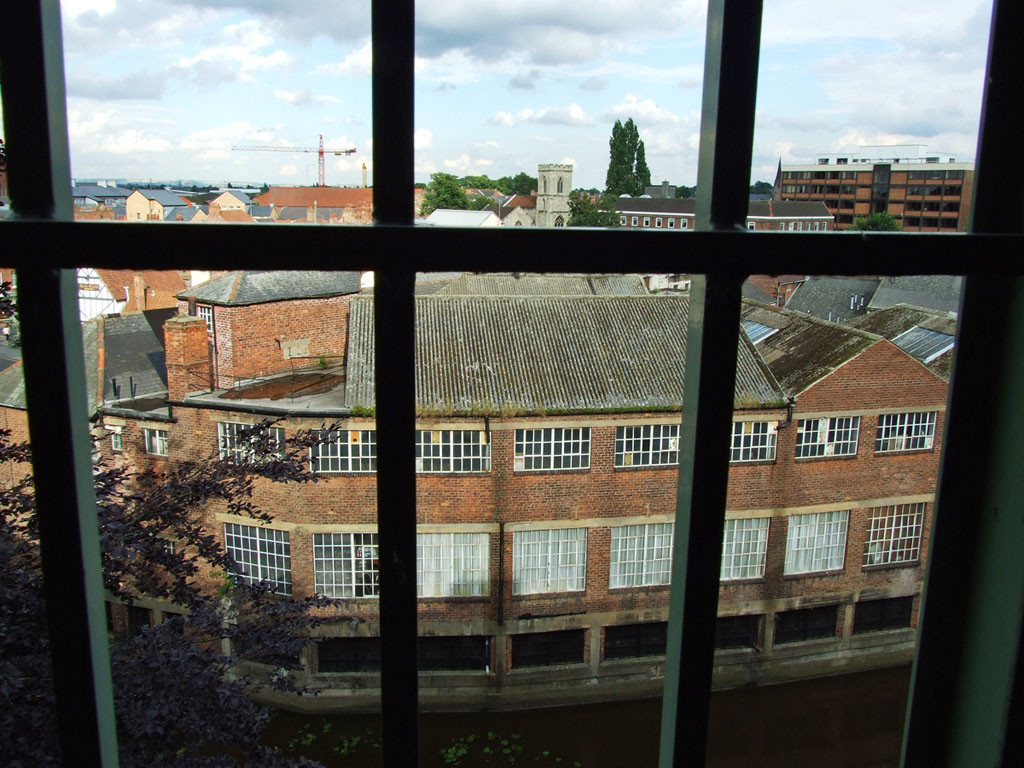 View across the Piccadilly and Walmgate area from the multi-storey car park, July 2007

We’ve moved to the right of where we were before. The building now known as Piccadilly Lofts is in the foreground, with the Foss just below it. Piccadilly is behind it, hidden from view. St Denys’s church on Walmgate is a landmark. There’s a large crane to the left of the church. In the far distance, hills are visible, an open landscape. 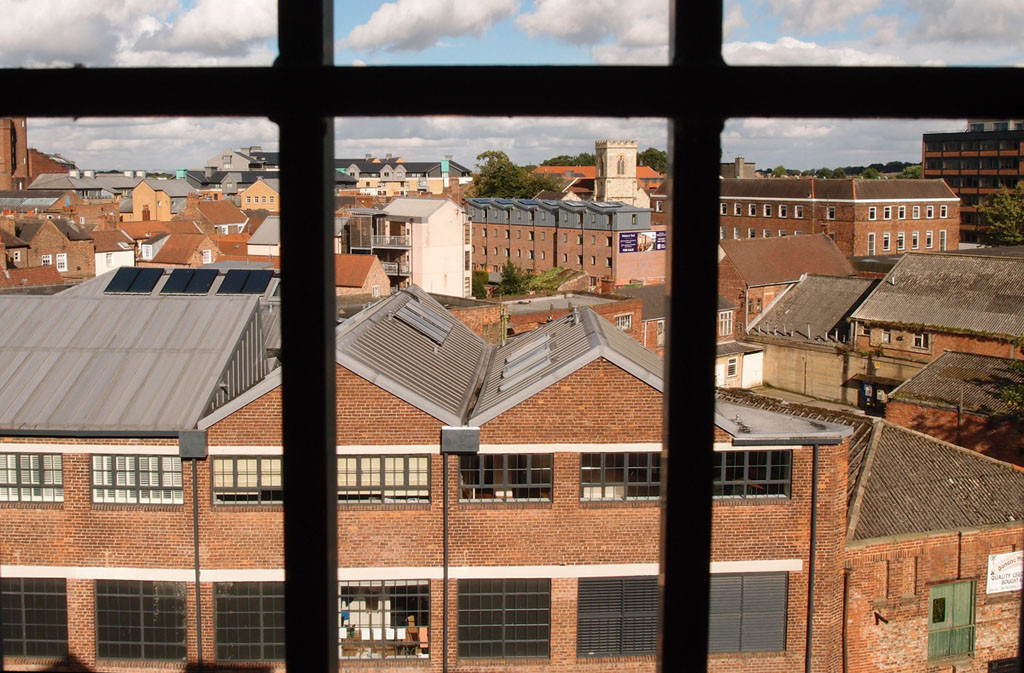 View across the Piccadilly and Walmgate area from the multi-storey car park, August 2017

Student accommodation blocks on the horizon to the left, in the Walmgate/Navigation Road area. Close to St Denys’s church a development of town houses on a back plot behind Walmgate, next to the Spark:York site. Looking at them, with the grey and rather boxy/industrial upper storey, and noticing a similar look to other bits of the skyline around here, I’m wondering why there were so many comments suggesting that the Spark:York shipping containers were going to look horribly out of place in this area. 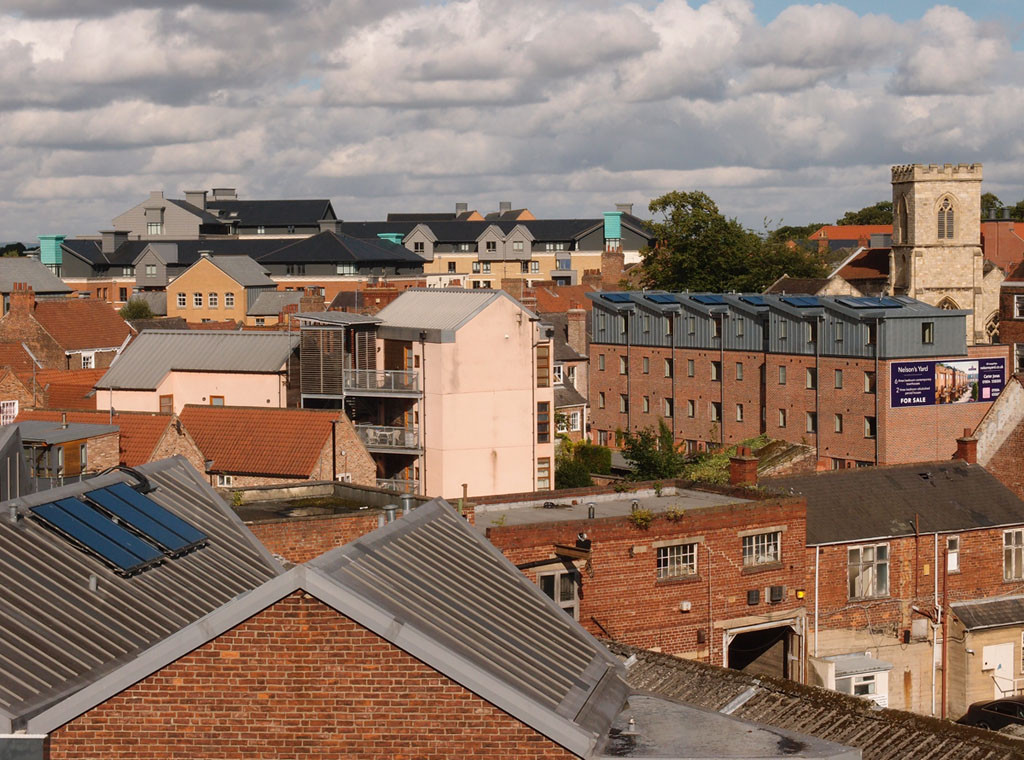 In 2007 I didn’t take many photos of the views from up here. But on the recent visit the light was wonderful and everything was looking bright and handsome, so I took quite a lot, including, of course, a fair few of Clifford’s Tower. 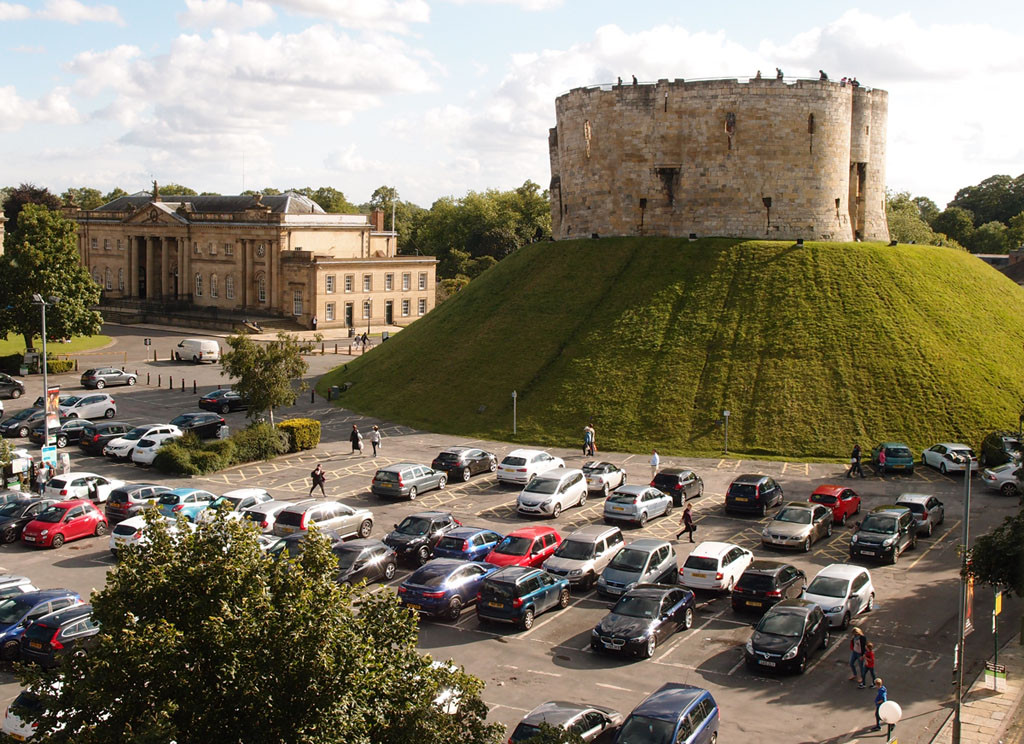 Recently there’s been so much focus on the more familiar view of this building, from the street level, from the front and the steps. Interesting to see it from up here. From here it looks a bit odd, that green mound, like the car park was there first and the historic structure has been plonked down on it. It reminded me of a jelly mould. A wider grass ‘apron’ around it might be more elegant and appropriate. 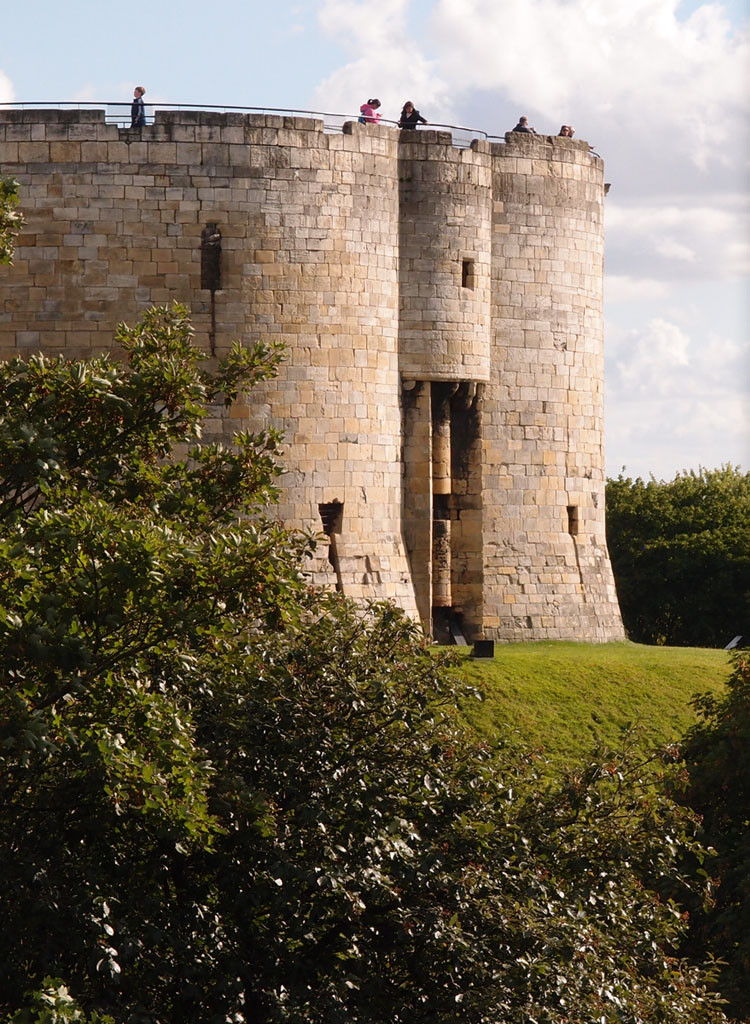 And then here, it was like seeing a familiar thing afresh, and I realised that I rarely look at it from this side, or of course from so high up. From up here, looking across to it, it was good to see it framed by the greenery of trees rather than surrounded by tarmac.

Then to move round to another viewing point and see it rising above brick and pantile. 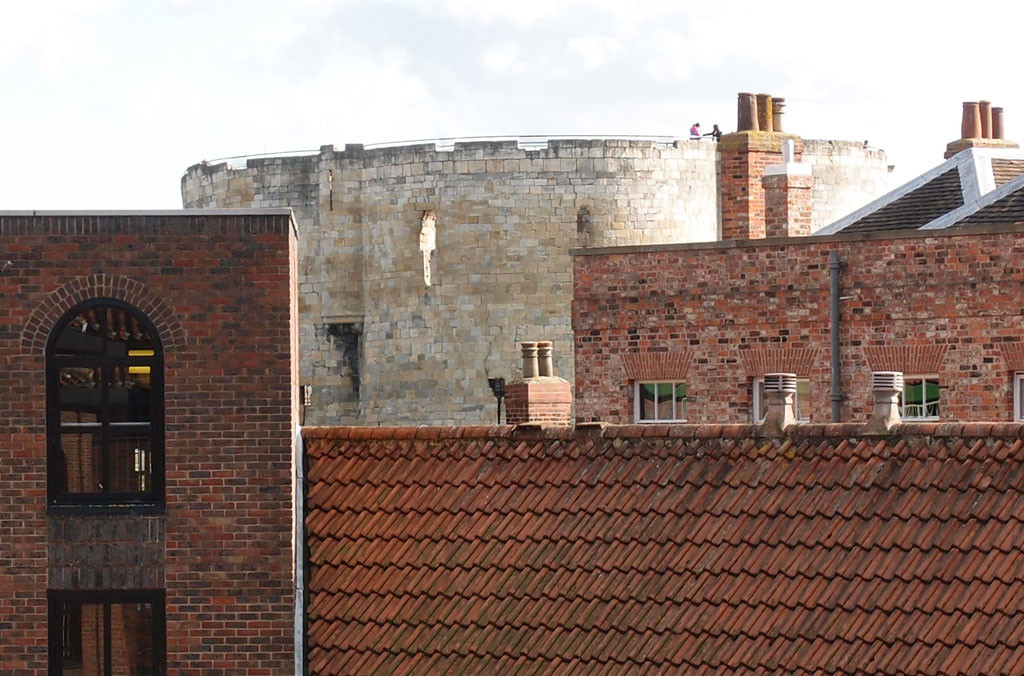 And alongside the standalone iconic structure of Clifford’s Tower I also admired this pleasing streetscape, looking towards Peckitt Street, heading down to the Ouse. Again, the trees enhance it. 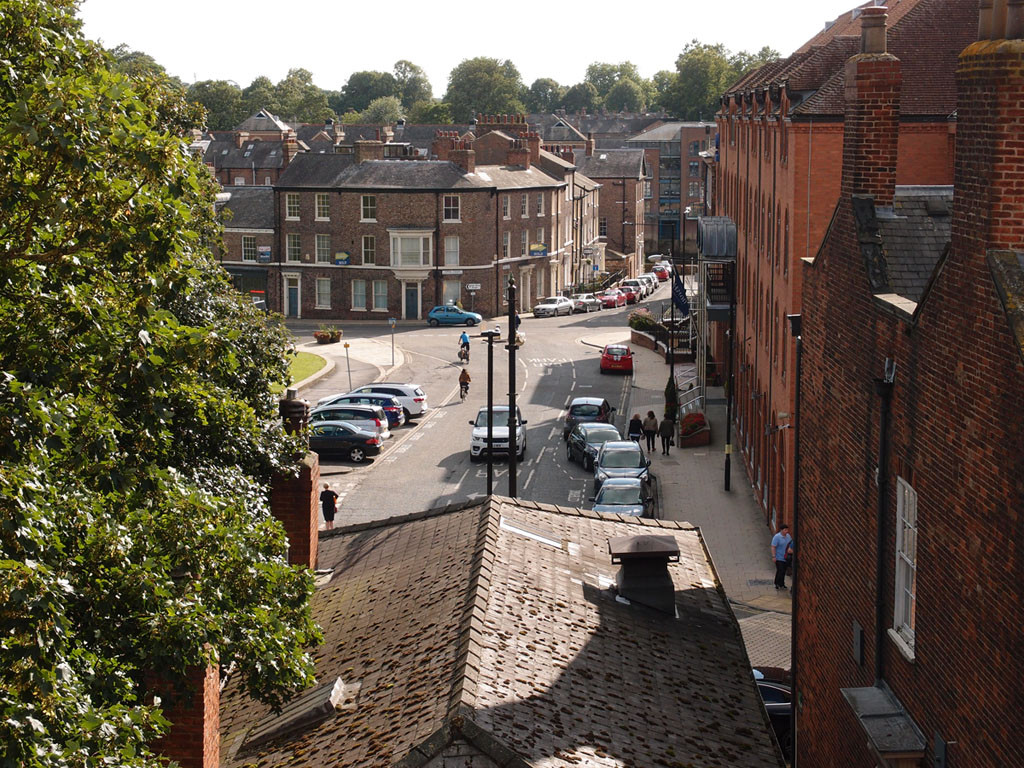 To finish this page of ‘bird’s eye view’ images, a view of the Foss. 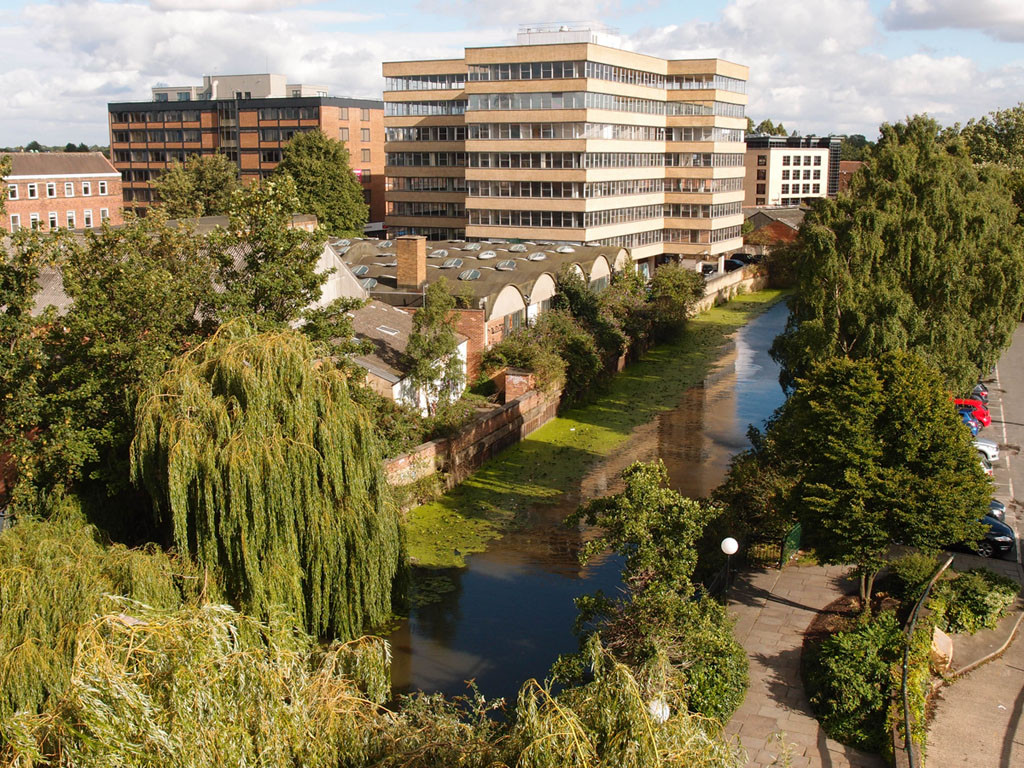 View of the river Foss by Piccadilly, looking towards Castle Mills, Aug 2017

So pleasing, I thought. It’s clear, from up here, that a green corridor has been formed by the Foss and the trees, shrubs and weeds around it, and on its (usually slow-moving) waters. We’re looking downstream, towards Castle Mills, the Foss Basin and the confluence, where we were on the previous pages. On one side of the river we have the Castle car park, stretching almost to the river’s edge, with a bit of walkway, grass and trees at its edge. At the other side, by Ryedale House, there’s the rather scruffy building, with the humped low roof. I’ve always found it rather pleasing.

Looking at this we then have to imagine what the proposed developments might change here. There’s an application to build a hotel (17/00429/FULM) on the site where the single storey building is now. That, of course, will be much taller, five or six storeys. Much loftier and more dominant than what’s there now. And if we lose the Castle car park and get more public space close to Clifford’s Tower we’re likely to get another sizeable building at the river’s edge, as suggested in published plans. So the reflections in the river will change, reflecting buildings, not light and sky so much.

Time to leave this area and focus on other things. There’s a lot to cover, and I’ve been thinking about Holgate. Time to fly off over there.

For notifications of new pages appearing here on York Stories join the mailing list or follow me on Twitter. ‘But how can I express my appreciation for this wonderful online resource?’, you may be thinking. Virtual coffees are appreciated.

Lisa @YorkStories is the creator, administrator, and writer of content on www.yorkstories.co.uk. She can be contacted on this link or via Twitter, @YorkStories
View all posts by Lisa @YorkStories →
Tagged  Castle Gateway, Clifford's Tower, Foss, Piccadilly
To link to this page's proper location please use the > permalink