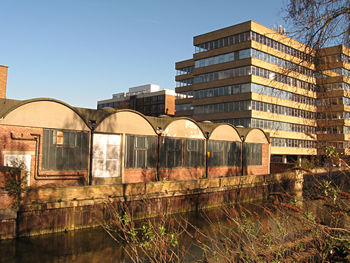 This area is seen as an eyesore and an embarrassment, but I’ve always rather liked it, and often take a wander Foss-side. The Ouse, our main river, is the focus of tourist-related leisure. It’s big and wide and strong. The Foss, by contrast, is narrow and sluggish, canal-like, with built-up banks, serving industry, for centuries. And always a dumping-ground, and often full of litter, but surprisingly full of wild creatures too.

However much we increase our ‘tourist offer’ (hideous phrase) it’s unlikely we’ll ever turn the Foss into a nice clean sanitised place. But in the beautiful new clean light of another springtime, even the Foss and its bank-side buildings look photogenic, reflected in a river that looks almost clean. 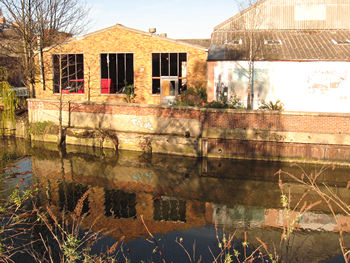 After being cheered up by an amusing sign on Parliament Street (following some rather less cheering grappling with malfunctioning machines at the bank) I thought I’d wander down Coppergate way, and I ended up at the edge of the car park, near the Foss, looking across it to the back of the Piccadilly buildings. Really I was looking for somewhere suitably remote where I could have a cigarette. Having read some of the comments added to a recent Press article on the subject of smoking, I’m fully aware how much some people hate smokers, so think it’s best to be well away from sanctimonious folks and disapproving looks.

The sun was shining, proper warm sun, right on my back. The well-known historic monument of Clifford’s Tower was behind me. 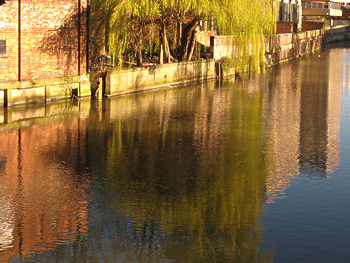 Looking the other way – as I like to do – here are a few views of the Foss-side buildings. At this time of year, when the light gets more lively, even the ugly things look handsome. Particularly when enhanced by the bright new growth of willow trees reflected in water.

The quiet place I used to go to have a cigarette is now always occupied. The street drinkers go there, and to other Foss-side sanctuaries nearby. I guess that this is a result of ever-expanding ‘alcohol exclusion zones’, pushing the street drinkers out of the tourist zone.

Apparently our visitors are being protected from evidence of the real-life they’re no doubt familiar with at home. Efforts continue to sanitise and prettify the city (if you turn a blind eye to the overflowing bins and embarrassingly mucky public toilets). 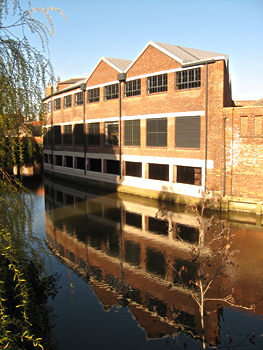 This building has been smartened up since I was last down this way, and part of it now houses a (another) Tesco Express. This rather baffles me, as I thought there was a general ‘lockdown’ on piecemeal and small-scale redevelopment in this area, as a result of the grand visions for comprehensive redevelopment. The Yorkshire Air Museum can’t progress with an idea to reuse the old Reynard’s building, as they were offered an unworkably short lease. This was apparently because the building is within the designated ‘Castle/Piccadilly’ development area.

It would seem that this particular building just across the road isn’t within the Castle/Piccadilly development zone, or if it is, it’s somehow not subject to the same restrictions. Maybe because it’s being occupied by the all-conquering Tesco? Maybe because there was seen to be an urgent need for another Tesco Express (and another, and another)? 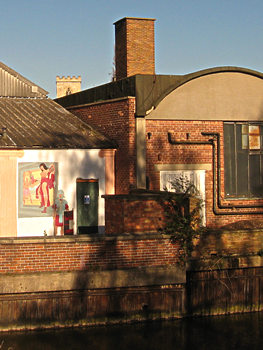 Contrasts make a place more interesting. Here, behind the utilitarian 20th century Foss-side buildings, the tower of the church of St Denys is visible, just. So while taking in this rather scruffy urban scene, and a fragment of 21st century mural/graffiti painted on a riverside wall, I can also think of the fascinating stained glass in that church, a quiet place off the tourist trail.

At some point, when the various planning issues are resolved, this area will be redeveloped, landscaped, all views and vistas designed thoughtfully. There may be a new pedestrian or cycle bridge. We may plant trees where there’s now a car park. No doubt we’ll have to include a substantial ‘retail offer’. 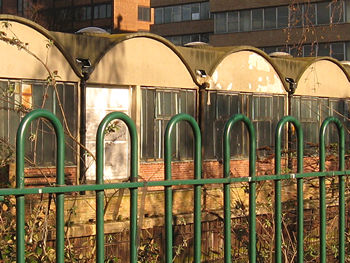 At present, this area near the Foss is still unselfconscious, shabby, a mixture of functional buildings, built up at different times, for different purposes. I rather liked the way this fencing reflected the curved roof opposite – the kind of thing you notice while wandering about rather aimlessly, camera in hand. Unlike the grander schemes for the area, where no doubt every detail will be planned, this effect is presumably accidental. I can’t imagine anyone said ‘Let’s have that curved-top style of railing, to nicely complement the industrial building on the Piccadilly side.’ 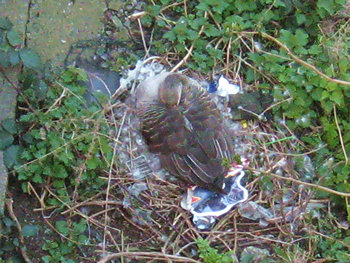 A little further down, on the banks of the Hungate development, I wondered which area was the ‘otter viewing platform’ I’d heard was to be constructed. I noticed a snoozing goose, head tucked under its wing, on what appeared to be a nest constructed from discarded plastic, surrounded by empty lager cans and an old sleeping bag. Near the new bridge, other geese were having a honking contest, incredibly loud, and presumably connected to springtime courting. Though perhaps they were expressing disbelief at the way we humans make such a fuss about goose poo on riverbanks, while we happily litter the world with waste far more hazardous, which will never rot away.