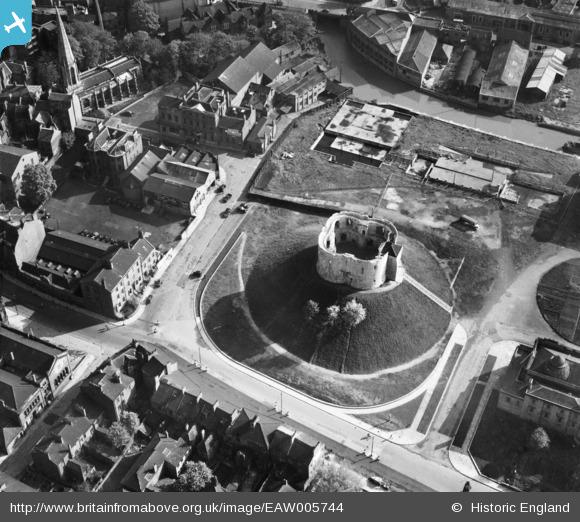 Clifford’s Tower and the surrounding area, 1947 (Photo: Britain from Above)

Clifford’s Tower — or rather, the area around it — is back in the news. A council press release announced plans for the ‘Castle Gateway’, to be discussed by council next week, and recent days have seen a flurry of news reports on the plans.

I’ve been looking at older photos and plans. The photo above is from 70 years ago, 1947, just after the war. Note the building work on the area alongside Clifford’s Tower, the piece of land most of us know as the car park.

Earlier pages included some views of the area around Clifford’s Tower in centuries past, including a 19th century illustration of the prison buildings before their demolition in the early part of the 20th century. The photo above shows the beginnings of plans for the site after that. Foundations and a basement for a council building. Still there under the tarmac of the car park, presumably.

In 1937 The Surveyor magazine (Vol 92) reported that York City Council proposed to erect new municipal offices to house the departments of the city engineer, the city treasurer, the Education Committee and the Health Committee.

The 1826 prison was demolished in 1935. York City Council bought the site and planned to build a new municipal building adjacent to the river Foss. An architectural competition was held and a design selected. The final design involved the excavation of a large, stepped, basement. Construction commenced in February 1939.

A later photo from the same collection shows that the building hadn’t progressed and that more of the area appears to have been given over to parking for cars and buses (though demand was obviously much lower back in 1953): 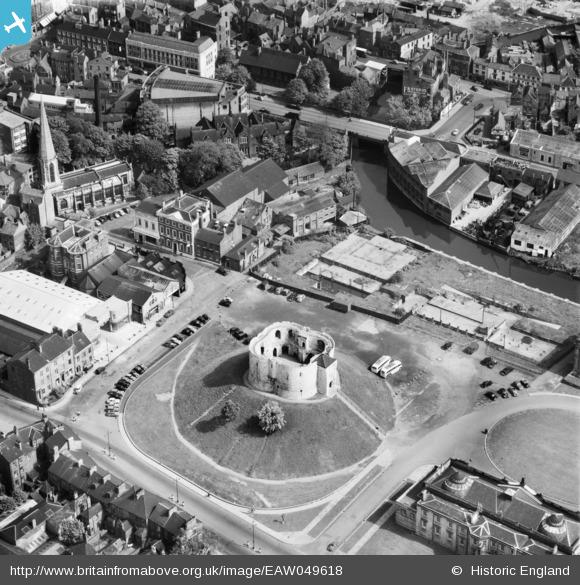 Clifford’s Tower and the surrounding area, 1953 (Photo: Britain from Above)

It’s clear from the above image that the building site boundary is designed to continue the line of Castlegate, has re-established the old line of the continuation of Castlegate. It’s shown on older maps but was obliterated by the 19th century construction of the prison buildings (see the 1852 map). After the apparent attempts to reinstate it with the planned council building it was then erased again when the whole site was covered over again, becoming mainly car park.

It’s interesting that the more recent plans are still focused on reinstating it, restoring the line.

We see the idea of a civic building on this site reappear in the influential Esher report of the late 1960s (or York: a study in conservation, to give it its proper title). It includes a plan for the area around Clifford’s Tower, with a prominent and large new building on the same site, next to the Foss, with a bit of space between it and Clifford’s Tower: 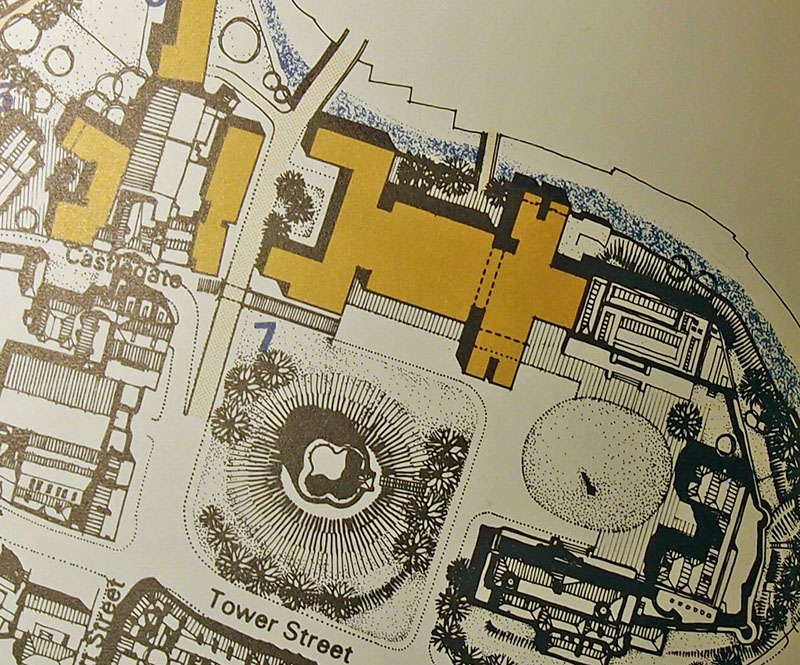 But not much space. An accompanying sketch from ground level looking towards the Castle Museum shows how the new building might look, with Clifford’s Tower on the right. It rather intrudes into the space, apparently a bit beyond the previous ‘Castlegate line': 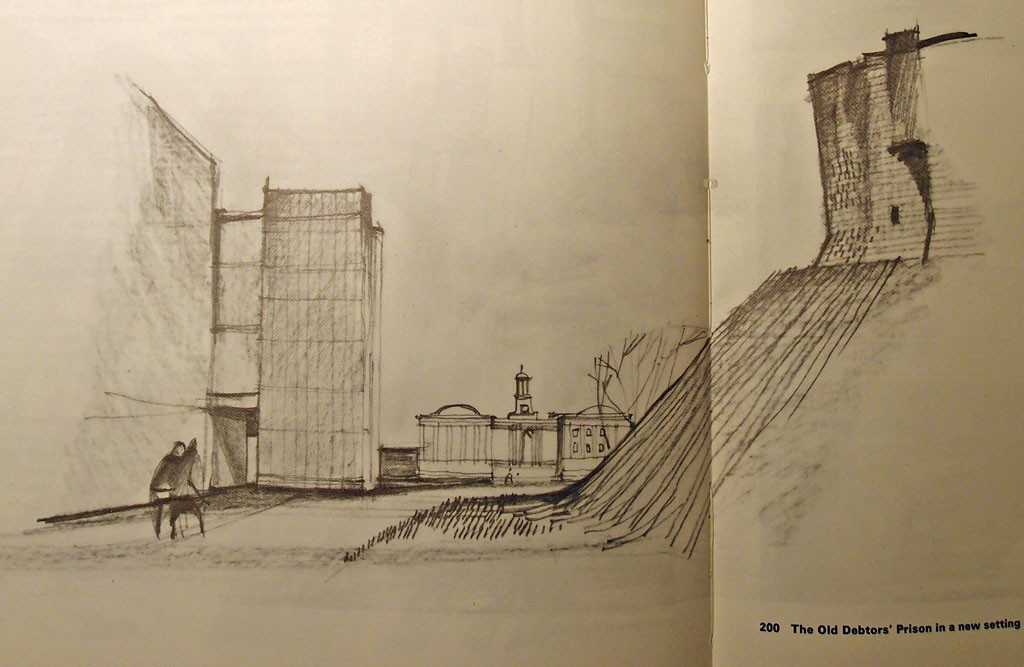 The 1930s idea didn’t progress beyond foundations, and the 1960s vision didn’t materialise, and neither, thankfully, did more recent plans: 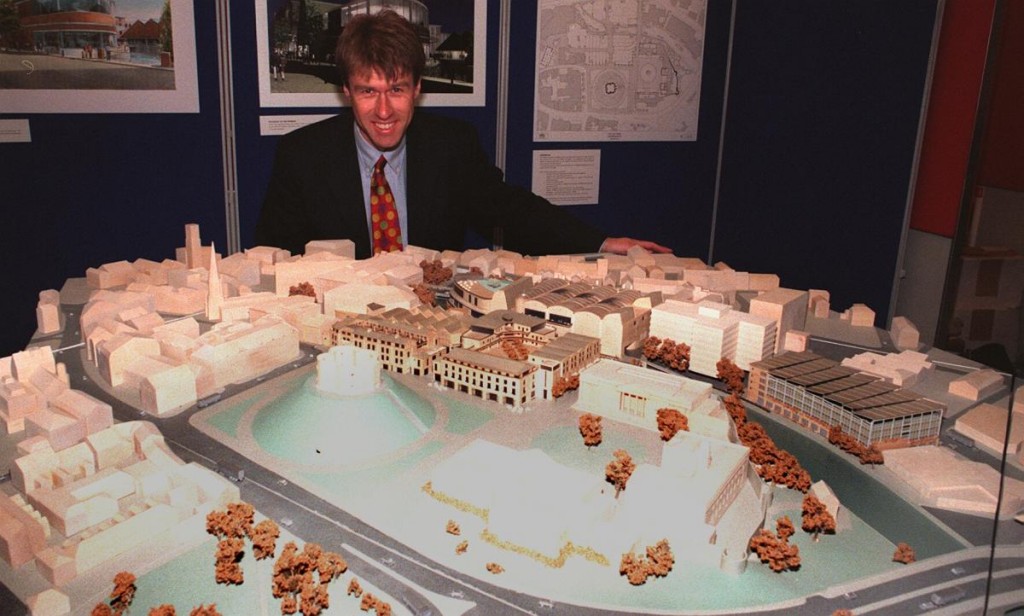 The above model has buildings even further over the ‘Castlegate line’, almost climbing up the mound of Clifford’s Tower.

So to now, and a large and generally impressive vision of the ‘Castle Gateway’, recently announced. It takes in a much wider area than just the car park — in fact a similar area to the ‘Castle Area’ the Esher report identified nearly 50 years ago, and going right up to Fossgate. A lot to think about. But for now, for the purposes of this page, let’s focus on the most important part, this same car park site and the 2017 vision for it: 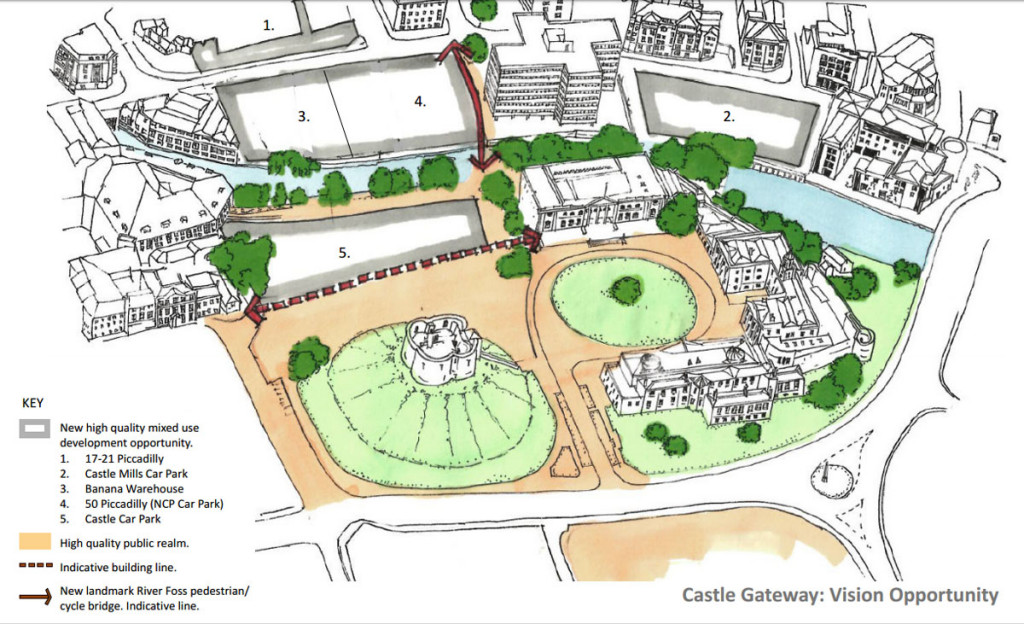 Interesting to compare with Esher’s ideas shown on the earlier plan above. That suggested the building of a new road bridge going from Tower Street across the Foss to Piccadilly, to a new car park. Now, almost fifty years on, the car is out of favour in city centres, and the emphasis is on a river crossing for pedestrians and cyclists. There’s also a more sensitive approach to Clifford’s Tower, with no incursion over the ‘Castlegate line’.

The news that the car park might be removed perhaps provoked visions of a large public open space, the grassed area extended, sweeping down from the Clifford’s Tower mound to the edge of the Foss. Not so. That land is just too valuable. A building is envisaged, or as the plan puts it, a ‘new high quality mixed use development opportunity’, rising up from the place where work on foundations and a basement began around 80 years ago.

it is proposed that the name be changed to Castle Gateway, a name which is both more descriptive and meaningful to the people of York. It references that this was the historic Castlegate ward, and builds on the geographical association with key cultural assets in the area

Among many background papers available on the council website there’s a document illustrating who owns what, in regard to the various pieces of land in this area near the Castle and the Foss. Steamrock Capital, apparently a fairly new company, now owns several buildings in this area. For this ambitious scheme to be realised many different parties will have to work together.

These plans are interesting, exciting even. And it does seem that there’s a sudden flurry of activity on this, after various proposals previously, and all the years of everyone knowing that the car park next to Clifford’s Tower was really a bit rubbish, and needed something doing with it. Presumably it has been given greater urgency by the controversial plan to add a visitor centre to Clifford’s Tower, which has been so controversial that it’s led to a successful crowdfunding campaign to pay for the process of starting a judicial review.

The Castle Gateway scheme will be discussed at the Local Plan Working Group meeting on 23 January and at the Executive meeting on 26 January.

Also to be discussed at the same Executive meeting is the transfer of a piece of land to enable English Heritage to build the Clifford’s Tower visitor centre (see item 7 on this link). But perhaps the grand vision for the Castle Gateway scheme will result in its shifting round to the car park side instead? Many people hope so.

Lisa @YorkStories is the creator, administrator, and writer of content on www.yorkstories.co.uk. She can be contacted on this link or via Twitter, @YorkStories
View all posts by Lisa @YorkStories →
Tagged  Castle Gateway, Clifford's Tower
To link to this page's proper location please use the > permalink