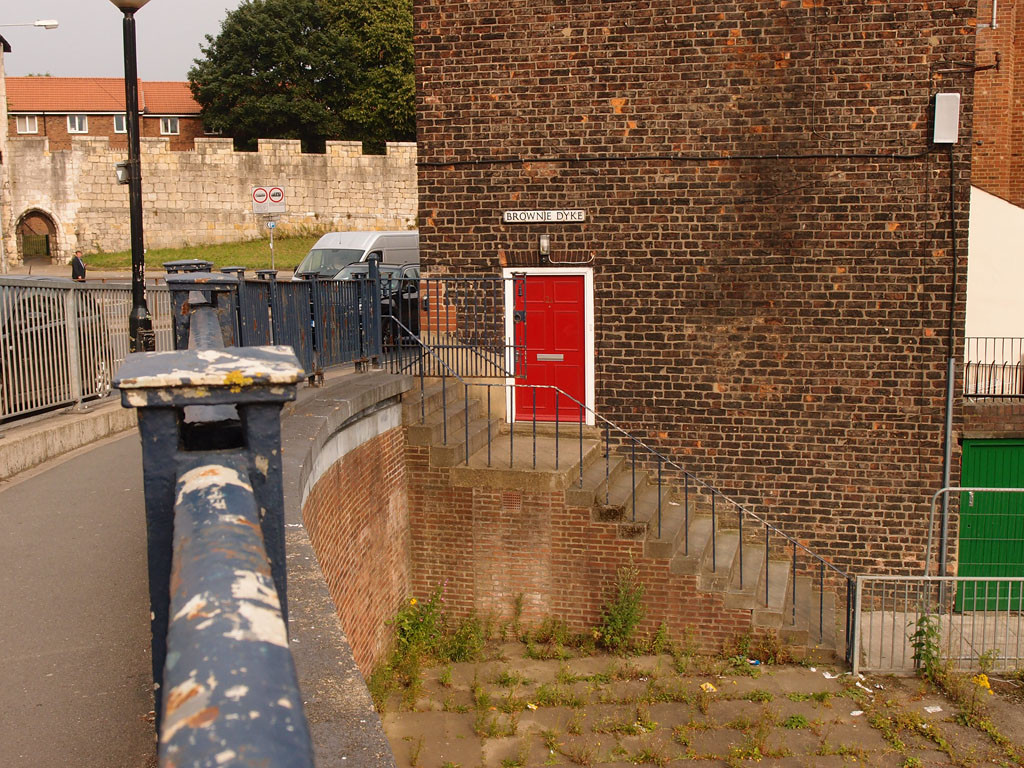 On Castle Mills bridge, city walls in the background

On the previous page, a few weeks back, we’d ascended the steps by Castle Mills Bridge, passing the sign for Brownie Dyke. My apologies for leaving anyone interested hanging about on one side of the river, in this imaginary walk around the Castle Gateway area. I really couldn’t write about/care about this in recent weeks. More important things going on.

We can cross the river now, over Castle Mills Bridge. And in doing so look back, to the steps, and the sign for Brownie Dyke, and the city walls just behind, pictured above. It’s easy to forget how close we are to the city walls, when we’re in the confluence/Foss Basin area, as the busy road with its traffic cuts through, making us less aware of this proximity, and how the landscape all links together, or used to.

After ascending the steps by Castle Mills bridge you have to walk some distance in either direction to find a pedestrian crossing. Or you wait, for a long while, for a gap in the traffic, as I had to after spotting these signs across the road and wanting to get a photo of them. 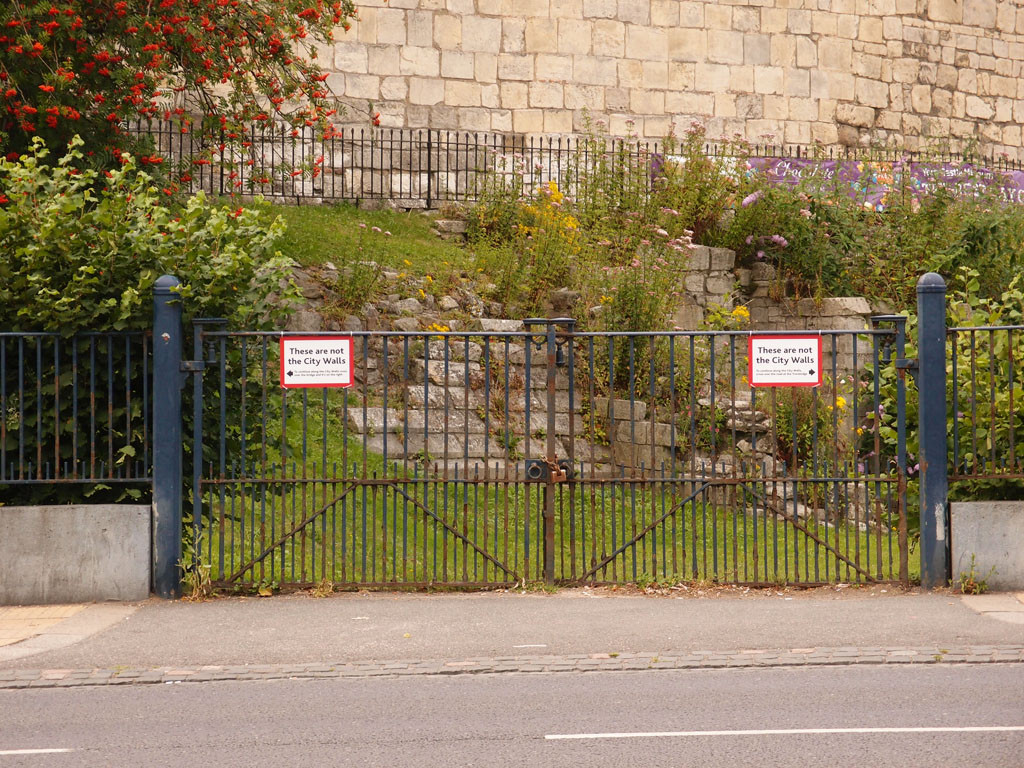 Signs by the castle walls: ‘These are not the City Walls’

These signs have been put up since I was last up this way taking notice of my surroundings. I was amused/interested, but was dashing past and thought I’d take a photo some other time, too much traffic in the way. But then remembered how I’d often wanted to take a photo of the old wooden sign for Brownie Dyke, and that I don’t seem to have one, and that it has since been replaced. So it seemed worthwhile to walk back a few yards, and to wait for what felt like a few years, for a gap in the traffic.

No chance of crossing without waiting even longer and then dashing across in a possibly dangerous fashion, so a photo from the opposite side of the road would have to do. My first three attempts were obscured by fast-moving cars, taxis, and a brave man on a bike tackling the rush-hour traffic, until at last an unobstructed view appeared.

Because of the distance, and it being a rather gloomy day, the images are rather fuzzy, but it’s worth a closer look at these signs. 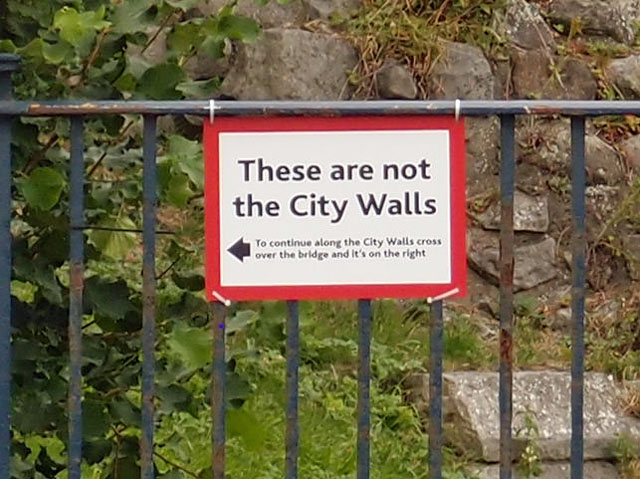 ‘These are not the City Walls’

I found the signs amusing when I saw them, but they’re also thought-provoking, now I’m back at home assembling this page. Years ago there would have been no need for these. That they’re there is all about this being a tourist-focused city, about the ‘visitor offer’ (a phrase I still can’t read without feeling a complicated mix of negative feelings). They’re there because of concerns about tourists getting lost, so we have to fill the place with explanatory signs, yet more visual clutter, usually detracting from the attractiveness of the place rather than adding to it.

And on this one, aiding visitors in the search for the other bit of the city walls, a Travelodge has become a landmark, an aid in wayfinding. 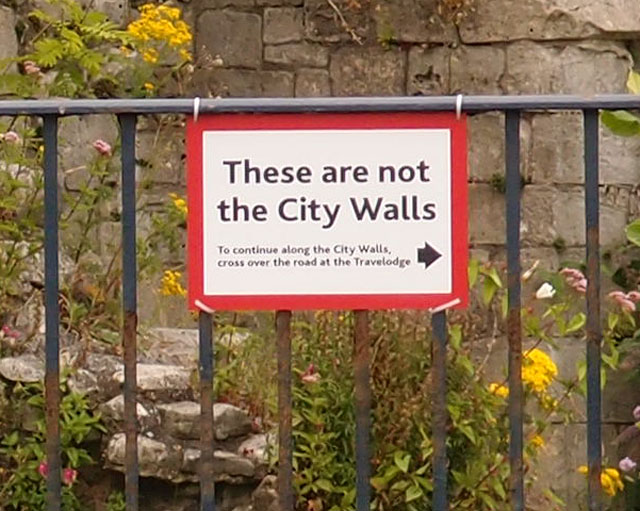 … And ‘These are not the City Walls’ either …

Just one of several Travelodges in the city and around the area, part of the general rush to invest in and profit from York and its ever-expanding ‘visitor offer’.

An article in the Press and a comment on Twitter highlighted the fact that the recent opening of the most recent York Travelodge — the one on Layerthorpe, which I’ve written about before — was attended by both the Lord Mayor and the York Central MP. I found this rather baffling/troubling. If it was the opening of a new bridge, or some other major thing of civic benefit to the city, to the residents, then the attendance might have made more sense. Maybe it’s just me. Anyway, moving on …

I continued on over the bridge, turning left at the entrance to the St George’s Field car park, and just to the left of that: 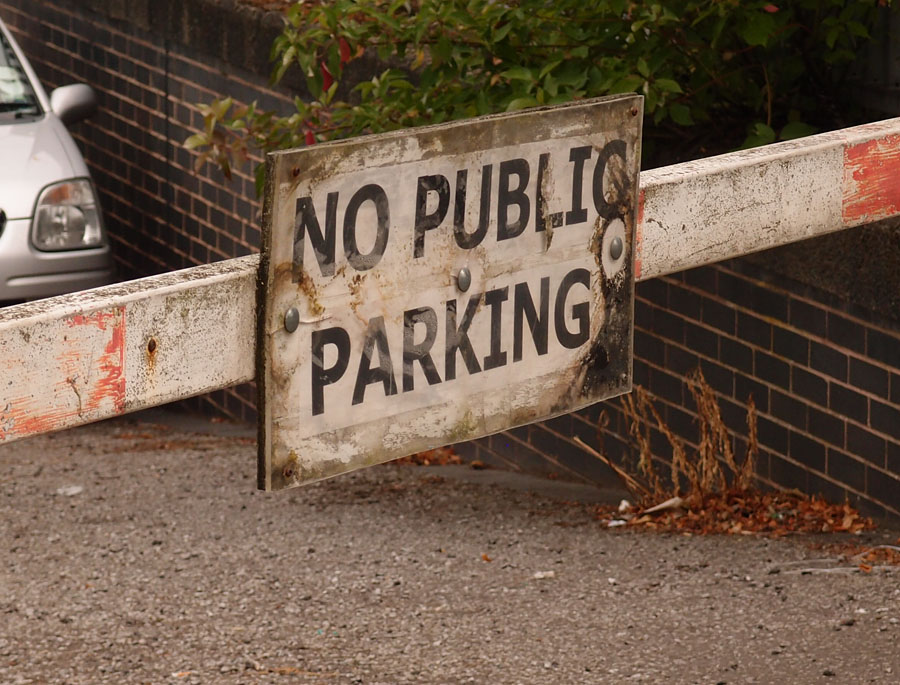 We can’t park here, but that doesn’t matter, as I’m on foot, as usual. And because of that I can sidle past the barrier and park myself on the perimeter of the Foss Basin. 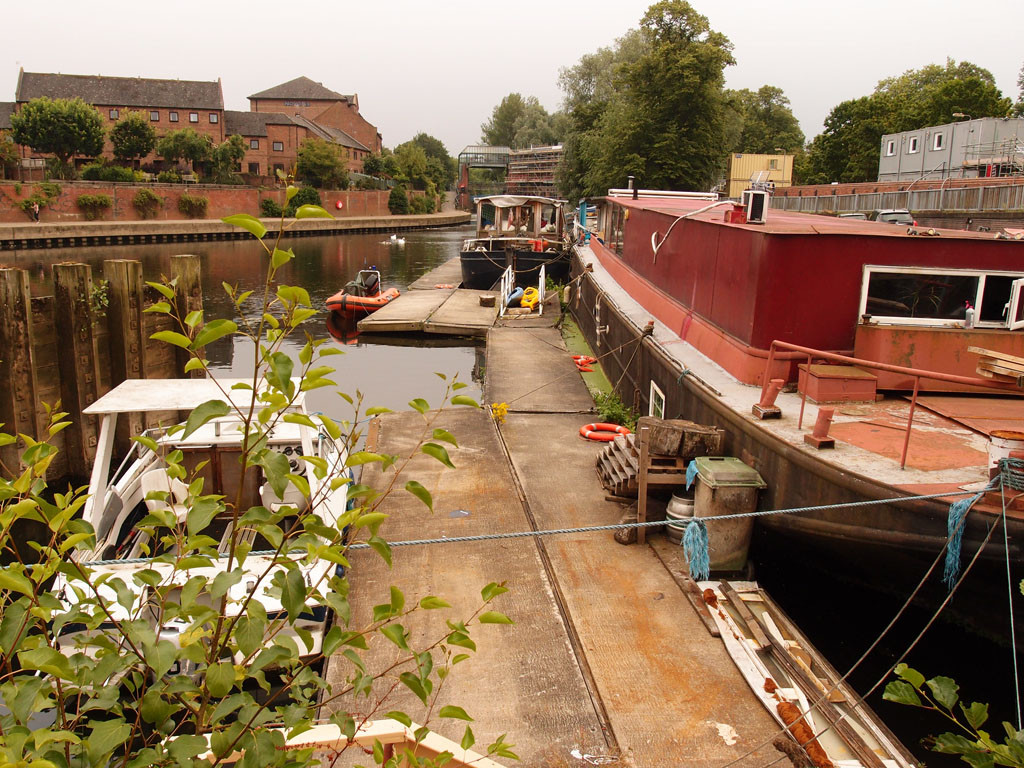 As I did one afternoon ten years ago, in July 2007, and that was one of the reasons for revisiting here in July 2017.

On the previous page I included a couple of the photos from my 2007 visit here. I took quite a few, but they’re mainly quite dull. Mainly focusing on old bits of wood, trying to be arty, with a new digital camera I’d got that year.

One of the good things about digital photography is the timestamp automatically added to photos. From this I can see that there was a fairly lengthy gap, about 20 minutes, between the photos taken up on Castle Mills Bridge and later ones taken down here by the water. I remember that I just sat around for a while not taking photos, just being here and doing nothing much. Just absorbing the spirit of the place. One of the photos from 2007 will do, as an illustration. 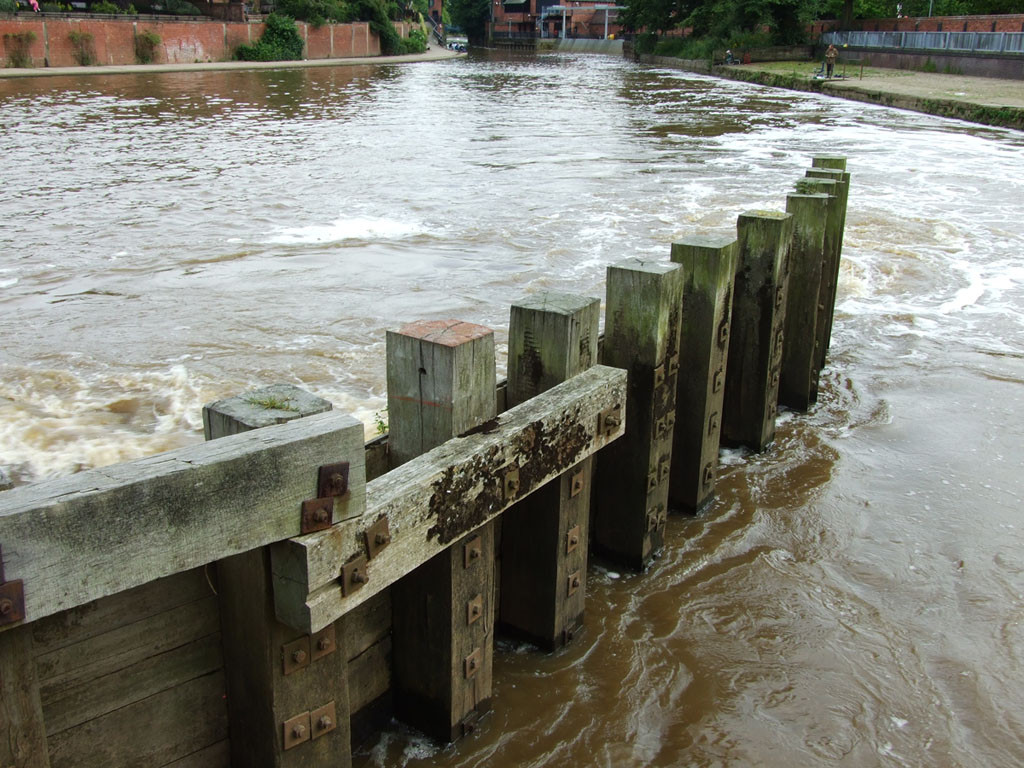 The My Castle Gateway project has asked us to think about what we want to be able to do in this area.

What I’d like to be able to do in the Castle Gateway area — or in particular these bits of it by the Foss — is the same as I already can, which is to find a quiet place with not many people around where I can sit and look at water and trees.

Looking behind, rather than ahead towards the confluence, there’s a striking architectural variation. 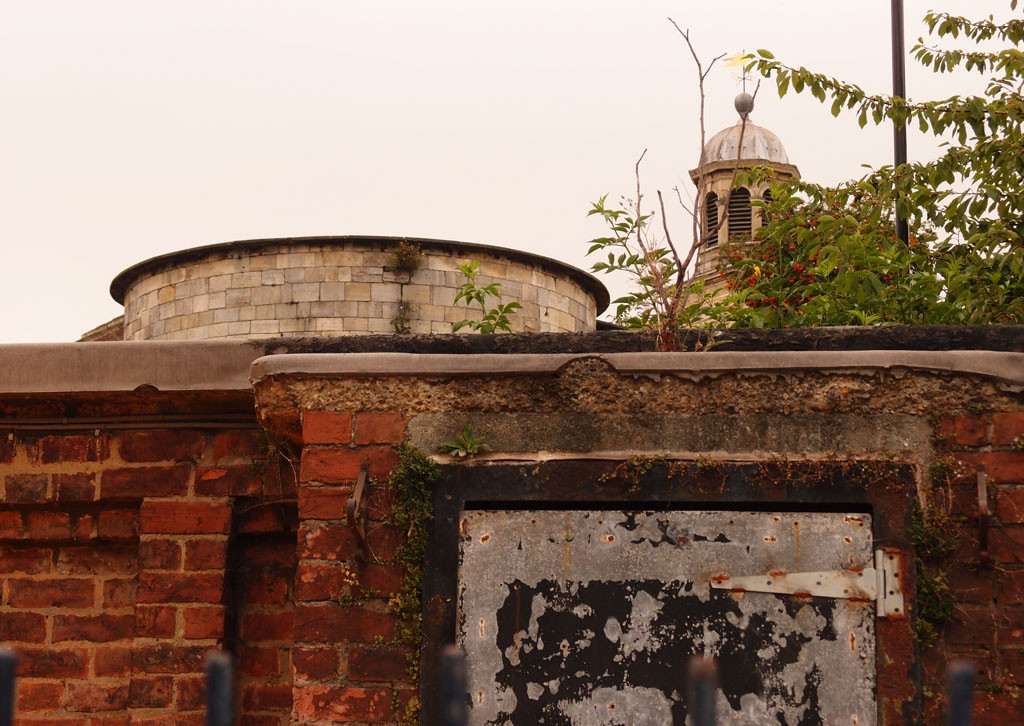 A mix of architecture, by Castle Mills, July 2017

The handsome structures are across the other side of the busy road previously mentioned, while the building in the foreground is here on this side, in the Foss Basin.

It’s quite scruffy here, around the Foss Basin, by Castle Mills. Weedy and quirky and a bit ramshackle. Not much of this kind of thing left now, in the city centre.

I’ve seen comments suggesting that the Foss Basin should be more lively, interesting, busier, and that it should look to Little Venice for inspiration.

‘Little Venice’ is in London. It’s a place named after/reminiscent of another place. For a part of York to aspire to being more like another place named after another place doesn’t really do it for me. Particularly as the word ‘affluent’ appears in descriptions of it. This city of York, in its centre, has gentrified itself already to a point where many of us barely recognise it. Making something posher and busier might bring in more money for a few people but it can alienate and push out the people who used to feel connected to the place.

I’ve felt increasingly disconnected from York, as it is now, as it has become. But down here, by Castle Mills lock, just me on my own, with the occasional person passing by on their way somewhere, I get it again, that feeling I get less often — rarely, now — in the historic core of the city I was born in and grew up in and have lived in for nearly fifty years. There’s so much here that speaks of the place that it was, and is, just small quiet things, unlabelled, overlooked, ordinary. The carved numbers, so carefully and beautifully done, at the edge of the lock, worn by water and time. 14, 15, 16. The maker’s name on ironwork associated with the lock’s operations. Stockton, it says. All the way from the Tees.

Many queries, things to look up later, or perhaps discuss back home. The kind of investigation of place and the details of place that ends up making amateur local historians of so many of us, as it goes on and on as we dig through the layers, pursuing particular interests in particular places, getting it at last, how it works.

This place sits quietly, with its stories, and soon no doubt there will be signs attempting to present those stories, in a simplified form, and the smartening up of it, and the painting of its ironwork, and the filling of its silence with chatter and no doubt there’ll be another café, or several, and all the people involved will be pleased and congratulate themselves on its reinvigoration. It will attract the ‘right kind of people’, according to the definition of people who call in to radio phone-ins and use phrases like that. I don’t feel I connect to what’s being said there, so maybe I’m not the right kind of person.

For now, this place is settled into itself, just there in the landscape, with so much to tell if we just put a bit of effort in, sit quietly, walk through it, look, read the old books.

As I’m drawing to a close this short series of pages on the Castle Gateway area, I don’t want to ‘close low’, to use a phrase that comes to mind from the controls on the nearby Castle Mills lock. 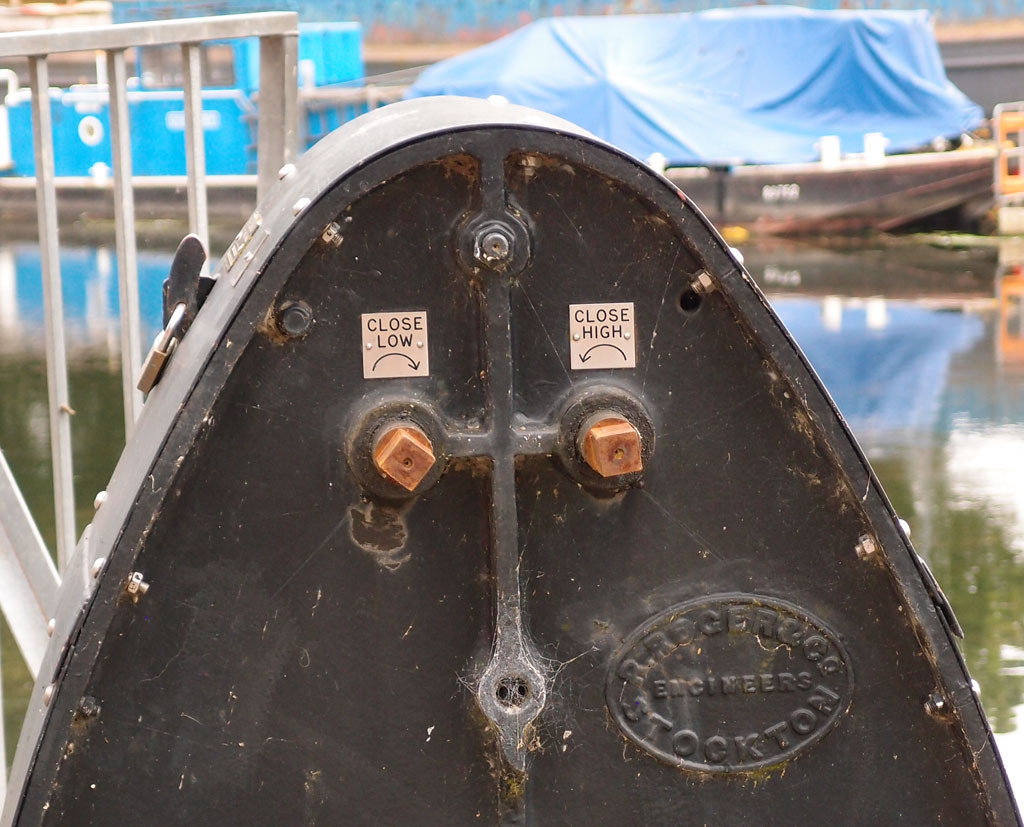 So let’s close high instead.

At this point those famous words of Orville the duck come to mind:

But let’s pretend we can, as it saves trying to cross the busy road of Tower Street.

As a change from walking let’s take an imaginary flight … maybe not as Orville, who after all probably couldn’t actually fly … but as a pigeon, a good old robust city pigeon, they’re descended from rock doves you know … there are no cliffs nearby, but there is something fairly tall on the horizon, with numerous ledges … and we might be able to find the gap in the pigeon-deterring netting … we’re struggling through …

Lisa @YorkStories is the creator, administrator, and writer of content on www.yorkstories.co.uk. She can be contacted on this link or via Twitter, @YorkStories
View all posts by Lisa @YorkStories →
Tagged  Castle Gateway
To link to this page's proper location please use the > permalink