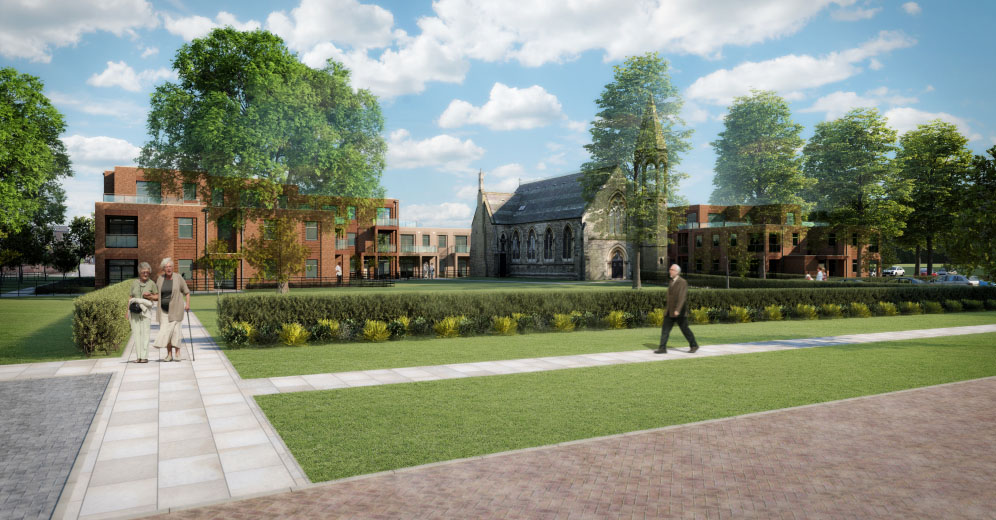 Plans for Bootham Park: new buildings in the area around the chapel, from ERL planning application

Hard to believe that in a few days it will be exactly six years since Bootham Park Hospital closed. This month, after years of concerns about its future, and with various visions for it publicised, there’s an actual planning application available to view on the council’s planning portal:

(if that direct link doesn’t work, go to planningaccess.york.gov.uk/online-applications/ and enter the reference number 21/02108/FULM in the search box)

Local media reports in recent months covered the sale of Bootham Park to ERL, and the ‘visions’ for how it might look. These included a rather idyllic looking representation of all kinds of lovely things going on in the green space in front of it. 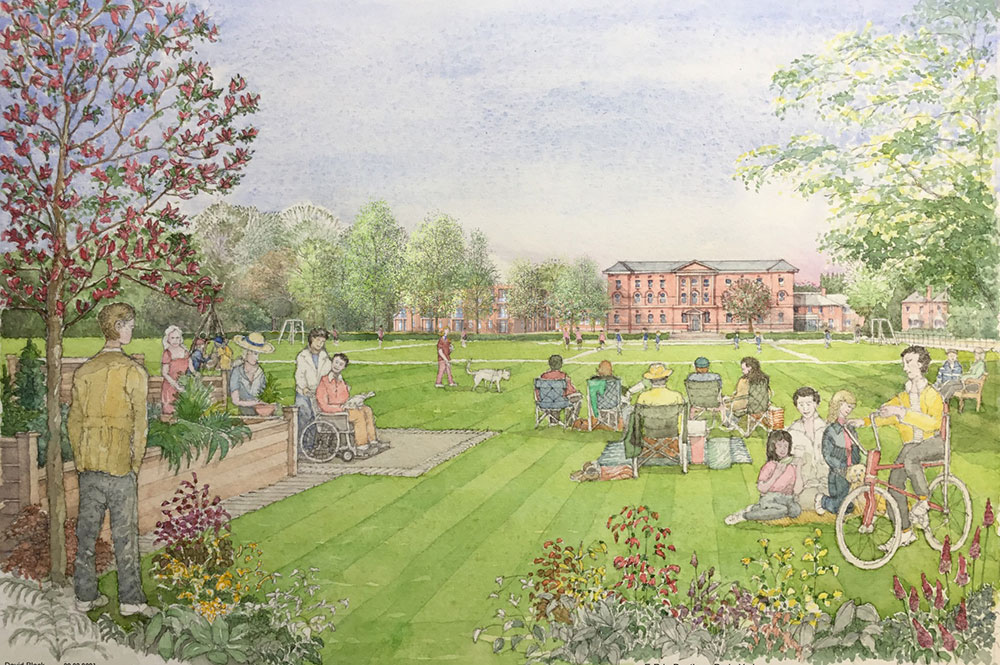 There would be a walkway around it, a picnic area, an edible garden, a sensory garden, sports pitches, and perhaps a pop-up outdoor cinema occasionally, and a temporary market.

I wondered how all that was going to fit in, and work together. Boring of me, perhaps, but I wondered about those messy but important details like dog poo on sports pitches.

Anyway, we now have the actual planning application, not just nice representations.

Inevitably, it’s an application with a huge number of documents and a huge amount of detail. It’s such a historic and complex site, containing many buildings from different periods, and a large area of parkland around them. Here’s an aerial view, from ERL’s website boothampark.co.uk: 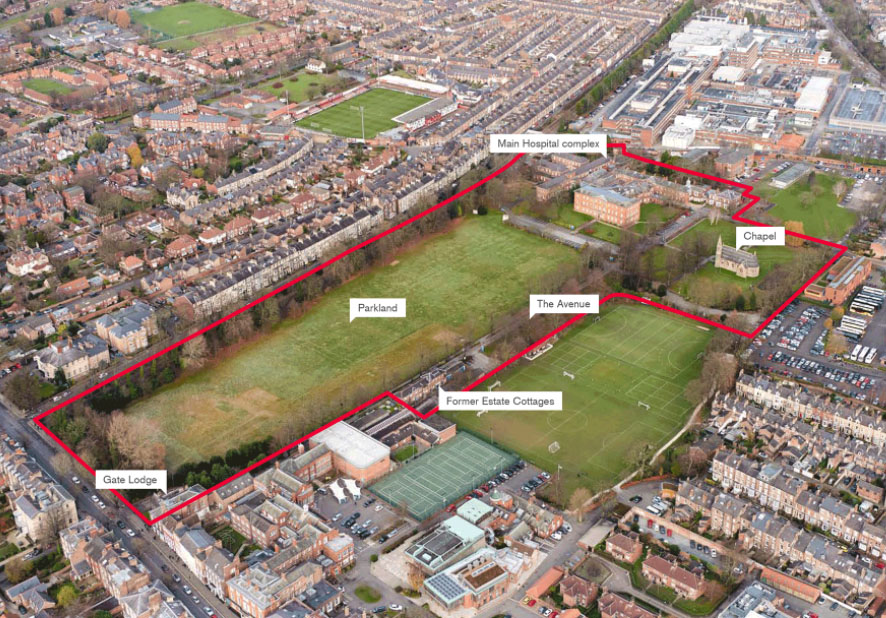 Note that the application site is marked with the red line boundary. The plans aren’t for the whole of the site we think of as Bootham Park, as the NHS has retained in its ownership an area of land in the north-eastern corner.

I’ve written about this place many times before, being one of those locals who has a certain sense of connection to it, having lived in the area close to it for some time — 30 years. I probably took it for granted for most of that time, but certainly haven’t in the six years since the hospital closed, as it was clear that it might end up a gated, privatised place. For a while, after the hospital closure, it felt like it already was that, with a security guard on patrol to keep us off the field.

As I’ve said before, it seems to me that the most important aspect of any development is that the current access through the grounds, from Bridge Lane and Clarence Street to Bootham, is preserved, and protected, for pedestrians and cyclists. If not, then we would lose something many of us have valued for many years.

In the available planning application documents I looked for information on the right of way, specifically.

Apparently it isn’t, technically, a right of way at present, but under these plans would become one:

Pedestrians and cyclists can also access the site from the north and south running from Bootham/A19 to the south and to the north to the pedestrian pathway there, linking Grosvenor Road with Bridge Lane, that divides this application site from the
York Hospital site. The pedestrian/cycling route is called ‘The Avenue’; while the public make use of this it is not a Public Right of Way and remains in private ownership.
Should planning permission be granted then a formal right of way or similar dedicated right will be granted in perpetuity.

Sounds great, good news. But I also know that elements of planning applications get changed later, after public attention has moved on to other things, so I hope that this aspect is focused on and legally protected, and that the route through doesn’t end up as a ‘permissive path’, but a properly protected right of way.

The planning statement also emphasises that the developers are committed to preserving the wider public access to the grounds:

Enabling and securing (in perpetuity) public access, including sports pitches use by the adjoining school and other schools during term time. In addition, public access will be secured of the large open area in front of the main listed building.
This will include a 680-metre exercise route around the perimeter of the open space which will be accessible at all times. The open space area will include sensory planting/edible gardens, flexible break out spaces, seating, and spaces for
contemplation alongside natural play equipment as well as biodiversity enhancement. All, of course subject to the Council’s approval.

It looks convincing, and like it’s meant, and I’d like to believe it is. But there’s clearly going to be a huge investment in the site, and it’s clearly intended as a ‘luxury’ kind of place for its residents, so I can’t see how the kind of public access suggested is going to work, without more fencing off/gating of various parts, particularly at night.

Presumably there’s more detail on these aspects in the other documents submitted with the planning application.

A massive investment will of course be needed for all this. The mere cost of the work needed on repairing and repainting the rusting dilapidated railings around the site – a kilometre in length, apparently – will be huge. Which is why it seemed a bit ludicrous that at one time there were vociferous calls for the whole place to be kept ‘for the people of York’. How on earth would we pay for it, and its upkeep?

So into its new life it goes — eventually, when yet another massively complex application for yet another historically important site eventually works its way through the system. I really hope there are enough staff in the planning department to cope with all of this. So much interest in this blossoming/gentrified city, so much money coming in, so much of the old place becoming the new place.

This website is supported by your ko-fi contributions. Thank you.