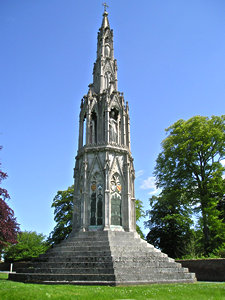 At least one website I read stated that this cross is one of many that were erected to mark the stopping places of the body of Eleanor of Castile, wife of King Edward I, when on her journey to her final resting place.

This is incorrect – Eleanor of Castile’s body rested in many places, but not in Sledmere. This is a copy of an Eleanor Cross, but it’s not got any real connection to the lady in whose honour the original ones were erected.

If I’d realised it wasn’t a royal monument, but actually a village cross and more recently a war memorial, I would have paid more attention, instead of taking a couple of rushed photos while on my way to visit the Waggoners memorial just up the road.

Sledmere is home to many unusual monuments. This is perhaps the best known, being so ornate and eyecatching.

I discovered from my Pevsner guide that the Eleanor Cross, designed by Temple Moore, was originally erected in 1896-8 as a village cross (rather more grand than the usual village cross I think). It is a replica of the Northampton cross (located near Delapre Abbey in Northamptonshire), which dates from 1291. The Northamptonshire cross is a proper Eleanor Cross. This is a copy of it. A very fine one at that, says Pevsner. 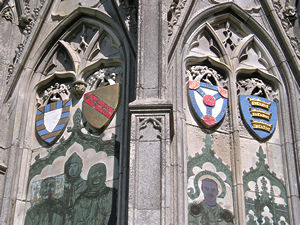 The Sledmere Eleanor Cross was adapted as a war memorial around 1920. This work saw the addition of brasses which include the figure of Sir Mark Sykes, sixth baronet, who died in 1919. (See links, below, for more information.)

These photos showing the monument’s details can be enlarged with a click of the mouse.

Nearby, also connected with Sir Mark Sykes, is the Waggoners memorial. 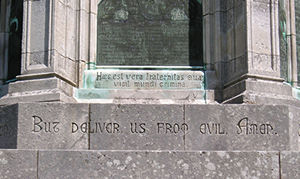 The Sykes family have been the owners of the Sledmere estate since the 1700s. More information can be found on the Sledmere House website.

Sir Mark Sykes, commemorated on the monument, died of the Spanish flu, in 1919. In 2007, permission was given to exhume his body, to assist with scientific research aimed at preventing a future flu pandemic. See the BBC site: Inside Out page. For more background information on Sir Mark Sykes, see the Wikipedia page.