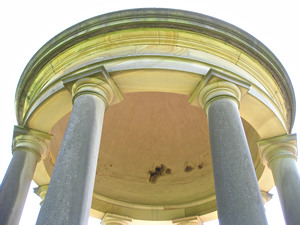 This handsome construction, dated 1840, is opposite the gates to Sledmere House, and has been included elsewhere on this site, in the page on Sledmere. More detail seemed necessary, particularly to include its lengthy inscription.

There’s a well under this structure, apparently. Over the well is a more obvious feature, a rotunda of Tuscan columns supporting a lead-covered dome.

Carved into the stonework is an inscription:

"This edifice was erected by Sir Tatton Sykes Bart. to the memory of his father Sir Christopher Sykes Bart. who by assiduity and perseverance in building and planting and inclosing on the Yorkshire Wolds, in the short space of thirty years, set such an example to other owners of land, as has caused what once was a bleak and barren tract of country to become now one of the most productive and best cultivated districts in the County of York."

Just a note: I’m no expert, but I think that not everyone thought that enclosure ("inclosing") was a marvellous thing, at the time.

Still, it’s a fine aesthetically pleasing monument, and that’s what I’m supposed to be representing.