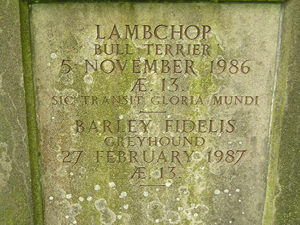 This memorial is in the parkland of the Sledmere estate, owned by the Sykes family. It commemorates the lives of the family’s dogs. The stone pillar has an inscription on each face.

This handsomely carved inscription commemorates Lambchop, a bull terrier, and Barley Fidelis, a greyhound. Both died in the 1980s.

The monument was off the beaten track, but was mentioned in the walks guide we were using, and I sought out this memorial in particular. It seems fitting that on an estate with so many memorable monuments, the dogs should have one too. 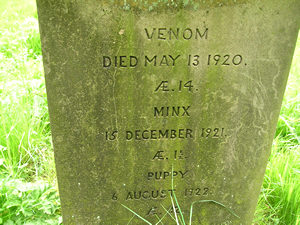 The earliest inscription, in Latin, dates from the 1780s. The other side commemorates Venom, Minx, and also a puppy, who died in the 1920s.

The fourth side of the column has this rather long poem by Byron, which I wasn’t familiar with, but have since discovered is Inscription on the Monument of a Newfoundland Dog, dating from 1808. The text of the poem is included below. The image itself can be enlarged with a mouse click.

Some people no doubt feel that only humans deserve such memorials. But I thought it was charming, and would be understood and appreciated by anyone who has ever had a beloved dog.

Though I wonder if the person who created the work wished that a shorter poem had been chosen, Byron’s poem is perfect, justifying why a dog might deserve such a memorial. 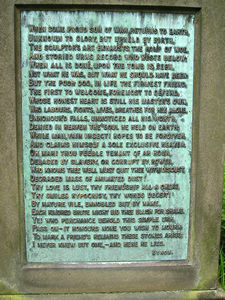 When some proud son of man returns to earth,
Unknown to glory, but upheld by birth,
The sculptor’s art exhausts the pomp of woe
And storied urns record who rest below:
When all is done, upon the tomb is seen,
Not what he was, but what he should have been:
But the poor dog, in life the firmest friend,
The first to welcome, foremost to defend,
Whose honest heart is still his master’s own,
Who labours, fights, lives, breathes for him alone,
Unhonour’d falls, unnoticed all his worth –
Denied in heaven the soul he held on earth:
While Man, vain insect! hopes to be forgiven,
And claims himself a sole exclusive Heaven.
Oh Man! thou feeble tenant of an hour,
Debased by slavery, or corrupt by power,
Who knows thee well must quit thee with disgust,
Degraded mass of animated dust!
Thy love is lust, thy friendship all a cheat,
Thy smiles hypocrisy, thy words deceit!
By nature vile, ennobled but by name,
Each kindred brute might bid thee blush for shame.
Ye! who perchance behold this simple urn,
Pass on – it honours none you wish to mourn:
To mark a Friend’s remains these stones arise;
I never knew but one, – and here he lies.