Thoughts from a bench

Been a while since I added anything. I needed to have some ‘offline time’, to focus on other things. But for now, let’s focus (again) on King’s Square. 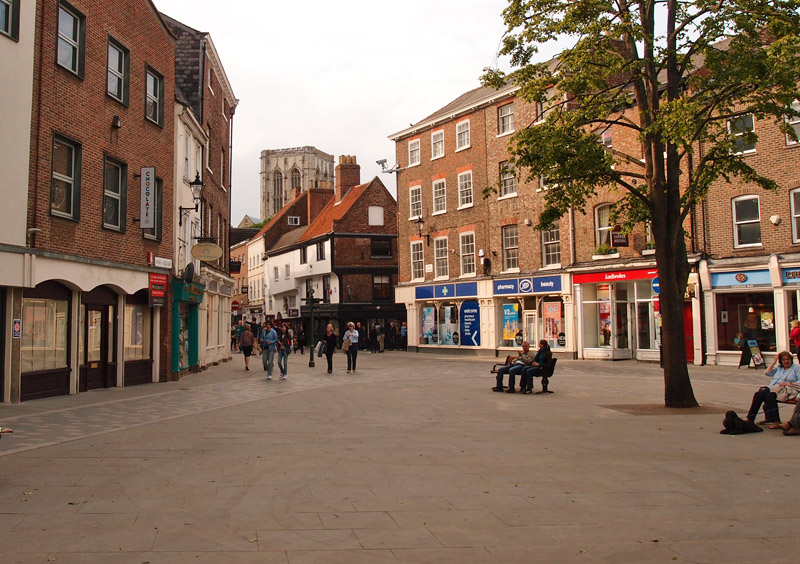 It’s just over a year since I wrote about one of its benches. Instead of looking at the bench, here we’re sitting on it, looking at the view from it, across the new and controversial paving laid here since.

The paving has cleaned the scene, made the foreground paler and wider, light coloured stone instead of black patchy tarmac to the right and dirty stone slabs to the left. So the whole space here between the King’s Court buildings and the Colliergate buildings, a triangular space we call a square, seems opened out, and viewing from back here it draws attention to the fine cluster of buildings, Petergate tapering away to the Minster tower. The buildings of course are the same as they were, but the foreground sets them off more effectively.

Here’s a photo taken from a similar place, before the changes. 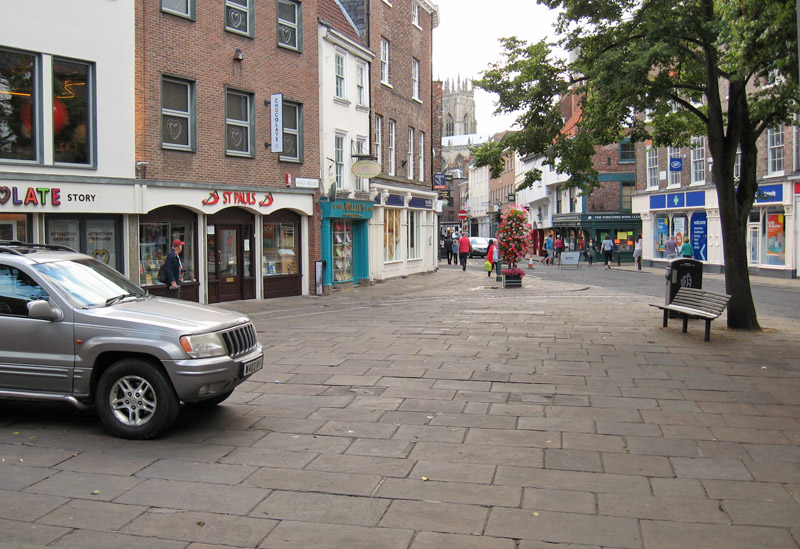 And a couple more photos of another ‘before and after’ view: 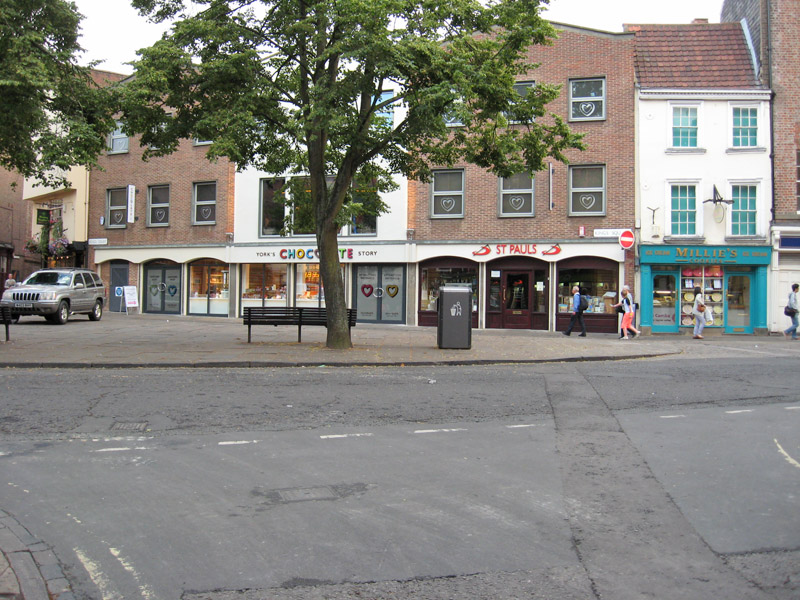 The square viewed from the end of St Andrewgate, in the summer of 2012. 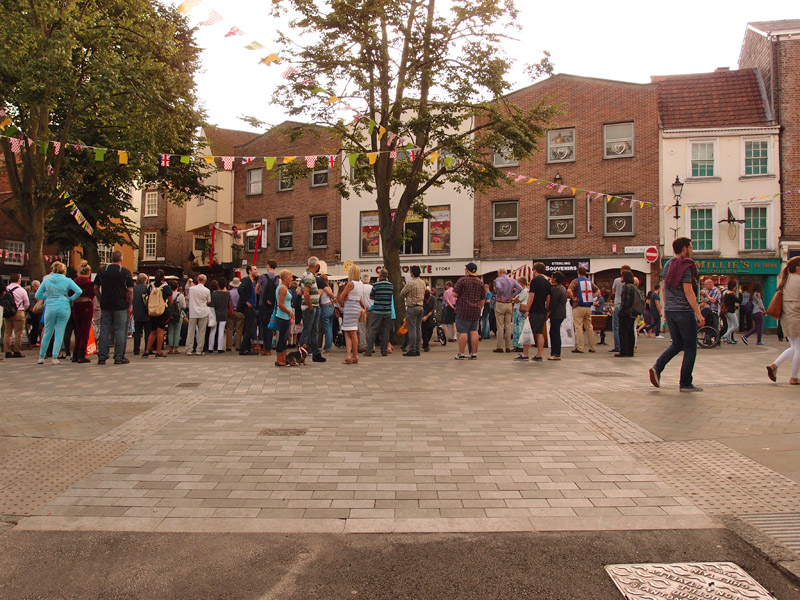 The square viewed from the end of St Andrewgate, summer 2014. New paving has replaced the tarmac road area and widened the square.

Last year, around this time, the square was the focus of much attention, on this website and elsewhere. Its paving was being ‘ripped up’ (as journalists always phrase it) and the whole thing was undergoing a complete ‘reinvigoration’ (as the council called it).

I compiled a summary of what had happened and what was supposed to be happening. Michelle Wyatt organised a petition and spoke at a council meeting on the subject of the setts and cart tracks. All very interesting, provoking much debate.

A year on, I sometimes sit in King’s Square, late in the afternoon, if I’m passing on my way back from town, if there’s a bench free. King’s Square used to be somewhere I passed through on my way to somewhere else. I took it for granted, until the proposal by Chocolate Story to use some of the area for cafe tables, then the plans for its ‘reinvigoration’ focused my mind on the place, focused many minds on it. And perhaps it has led to greater awareness of and engagement with the cityscape and plans for future changes. So that’s a good thing. And I find it increasingly important to focus on the good things.

The new paving may be a ‘worthwhile investment’ or it may be a waste of money, it may have ‘destroyed the character of the square’ (a frequent criticism) or enhanced it, but it forced many of us to pay more attention, to what we value, and why, and to what our money is spent on. That’s a good thing.

It also showed how impressive ‘people power’ can be. The shouty misinformed debate provoked by a typical Daily Mail article didn’t achieve much, but the quiet persistence of Michelle Wyatt in collecting signatures, then speaking at the council meeting, was a truly impressive example of ‘citizen engagement’.

I was also quite ‘engaged’ myself, particularly regarding the plans for the raised area, which to me seemed more important than paving slabs.

The reason I like to sit in King’s Square fairly often these days is because this part, the raised area, hasn’t changed much after all. The mulberry tree wasn’t cut down. There’s still a plaque to Paul Woosey, on the bench by the tree. Near the same tree, the old (1970s) cart tracks and setts were left in a longer stretch than originally intended.

I’ve mentioned all these things before. But want to mention them again because I often think about them when I stop for a few minutes to sit in King’s Square. What we ended up with here is, in my view, a successful compromise.

The last couple of years have seen increasing ‘citizen engagement’ on all aspects of living in this shared place we call the city of York. Twitter and Facebook have made it so much easier to raise concerns and to publicise them, whether it’s your own individual concern that your bin hasn’t been collected or a major massive issue like the Local Plan. It’s very busy and very noisy. And often angry.

And it’s a good idea sometimes, I find, to step back a bit, to turn off, go offline, and instead find a quiet place at a quiet time, and just sit there and count some blessings. And I’ve found King’s Square is a good place to do that. It has retained its heart, here on the raised area, where we can still sit on Paul Woosey’s bench or near the mulberry tree. 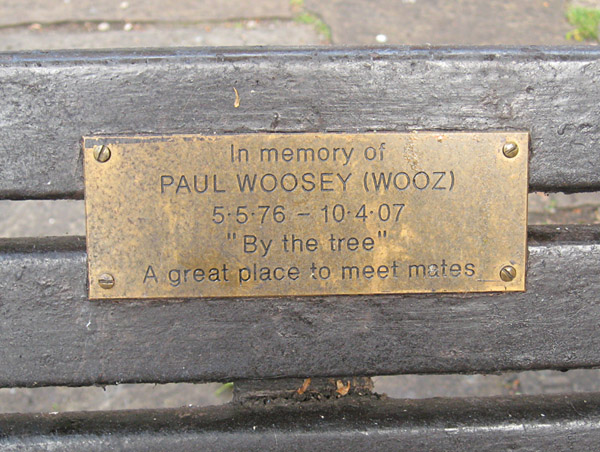 A few years ago, during a heated exchange of views via email, the person I was debating with suggested that sites like this one you’re reading ‘don’t really achieve a great deal’. I’ve thought about this every now and then, including during the recent ‘offline’ time. About what I could achieve with photos and words on a website, if anything. If it needed to ‘achieve’ anything anyway. If it was okay to merely represent, observe.

The focus of this website has changed and evolved, over the years, as everything else around it has, and those changes continue this year because of changes in my own life. It’s harder to spend the time covering and commenting on the city’s changes, partly because of that, and partly because there are so many changes in the local landscape, happening already or planned.

I’ve had a few weeks break from writing about York but that doesn’t mean I stopped paying attention. There are many, many issues, large and small, to cover. They’re not always given enough prominence elsewhere, perhaps, or they get lost in the wider picture. So I’m hoping to carry on with this record of a city and its changes.