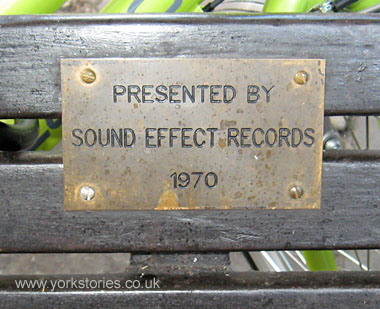 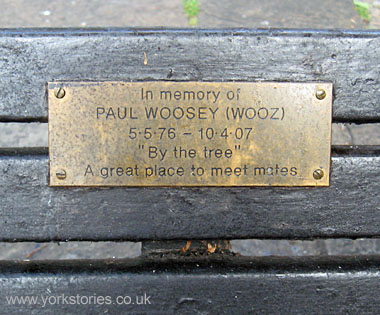 King’s Square isn’t somewhere I sit, but somewhere I pass by, pass through, on the way to Barnitts or Tullivers. There are usually people sitting on the benches. Which is perhaps why I’d never really noticed these small plaques.

I went to King’s Square to look for the plaque placed by Sound Effect Records, after reading about it in the consultation documents on the planned changes. I looked at the other benches to see if there were other plaques, noticed the memorial to ‘Wooz’.

And then of course there’s a plaque to mark the planting of the mulberry tree, which is to be removed from King’s Square for aesthetic reasons.

The evening I took these the square was empty – a rare thing. So I sat awhile by the mulberry tree, in this triangle of a ’square’, with its triangle of brass plaques.

There’s little opportunity to get ‘a sense of place’ in all the bustle and noise. You have to sit quietly.

I had what I’d like to call some kind of epiphany, if that didn’t look so daft. I got it, at last, what this square is. It’s a place that holds things. Like a church does. Like the church once in the centre of it did. Or rather, like a house. It reminded me of a house with family photos on the mantelpiece.

I was open-minded about the planned changes to this square. Into that open mind came the sudden conviction that the ‘reinvigoration’ will be an expensive and destructive mistake.

From the consultation responses:

‘In the 1970’s I owned Sound Effect Records at 5 King’s Square and paid for a street bench with plaque as my contribution towards the Council’s re-development of the Square at that time. This bench is still located there and still acts as a landmark to many people who shopped/visited Sound Effect during that period. I would like assurances that the named bench will be retained.’

‘We agree that this should feel a special and unique place. We will be in touch regarding the bench. We have not made detailed decisions on benches at this stage. It is however likely that the existing bench will be replaced.’

Right. It is a special and unique place. Already. Because of these things added by people who cared. The council cannot impose ’specialness’. In fact they’re about to destroy it.

Maybe the new benches planned will have a plaque saying ‘This plaque was placed by City of York Council in 2013 in memory of the plaque for Paul Woosey, the plaque placed by Sound Effect Records, and the mulberry tree planted by Joyce Douglas.’

No one I’ve spoken to wants this square ‘reinvigorated’.

The plans for the square have been modified since the above was written. The mulberry tree is to be retained, and Paul Woosey’s plaque will be placed on a new bench.