The ings do their thing: flood defences 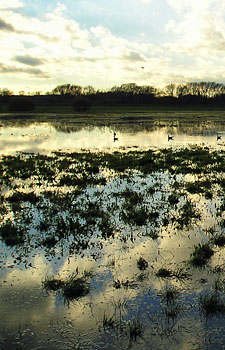 As a resident of Clifton, five minutes’ walk away from the River Ouse, I’m close to and fairly familiar with a major part of our flood defences: Clifton ings. Their role in flood management has become clear. So much work has gone in to managing these flows and floods.

We’ve seen it all before, to some extent, but the river levels this week were apparently the highest since 2000. During a walk through the city centre areas hit by flooding, the two most dramatic and memorable moments were the points where the more obvious flood defences hold the river in. At Scarborough Bridge, where I found the floodgate closed, and the river racing by so high on the other side, and when I walked along the river opposite the Guildhall. In both those places, the river level on the watery side of the flood defence wall was higher than my feet on the dry side of it. 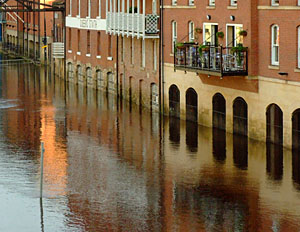 Our instinct about how things work in nature makes this feel just wrong somehow. Having a river channeled like that, artificially high – by rights we should be fighting against drowning, taken along with it. But there it is, on the other side of the wall, rushing by. A bit seeping through the sealed floodgates here and there.

It wasn’t always so carefully channeled through the centre of the city, and used to spread its flood waters further. You can see how it still wants to do that, the way it seeps through the floodgates.

At the other side of town, the floodwaters escaped and expanded as far as Tower Street, as noted in a memorable tweet: “This area was once the moat for Clifford’s Tower: it wants to be again.” (@ralphharrington)

Less contrived than the walls and gates, more natural, and indeed more beautiful, are the flat areas of land we call the ings. But these are flood defences too, and those upriver take in much of the floodwater before it reaches the historic centre. 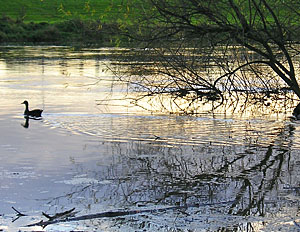 Clifton ings are the flat lands left ‘empty’ and undeveloped to the north of the city. Two sections take in water when needed: the large area where the river bends past Clifton Bridge, up to and just beyond the ring road bridge, but also the smaller area behind St Peter’s School, just upstream from Scarborough Bridge. (I call this smaller section Clifton ings – the authorities call it ‘Clifton Long Reach’ or ‘Lower Bootham’, my friend Vanessa who lived nearby knew it as ‘Paddy’s Pitch’.)

These areas turn into lakes when a flooding crisis occurs, with their earthen banks holding the water in and preventing further spread.

So though the city centre suffers damage from flooding, it would presumably suffer from far higher river levels if some of the water rushing downstream hadn’t been taken in by the ings at Clifton.

Old photos of floods in York show how things have changed, how the waters have been managed. Flood waters are shown covering North Street and Rougier Street, before the walls and gates were built to keep the water in and to channel it. Marygate too often flooded in its lower section, before the walls and gates were installed in the late 20th century. 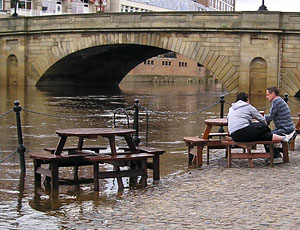 The stone arches of Ouse Bridge have been photographed in times of flood for more than a century, maybe since photography’s earliest days. They’re a useful reference point. We compare dramatic pictures of the water apparently just inches from the top of the arches, in the various major floods. A flood in 1892 seems to have been recorded on camera as particularly spectacular, and there have been many major floods over the centuries, before and since.

I wonder whether we can rely on such comparisons, as presumably our modern-day channeling of the Ouse in times of flood lifts its levels higher as it approaches Ouse Bridge, as the North Street walls keep it in. In the old days, before artificial flood defences, the Ouse spread where it wanted to, across those riverside areas and streets mentioned earlier. It lost some of its volume and force by heading over the ings, up Marygate, into the Leeman Road area, across North Street and Tanner’s Moat, into the Museum Gardens all around the hospitium, etc. Now less of it escapes on the way to Ouse Bridge, but we still use their arches as a handy reference to gauge whether things are worse than previous floods.

Fulford ings and Middlethorpe ings take in more floodwater as the Ouse leaves the city centre. They too presumably result in a lowering of the flood level downriver by taking in the expanding Ouse. 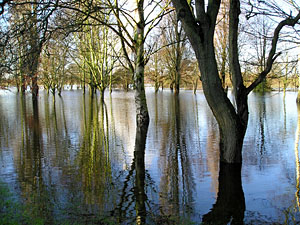 But as a Clifton resident I’d like to particularly thank our Clifton ings, for heroically absorbing millions of cubic metres of water, saving the historic core from further flooding. The generous lakes of Clifton, so I’ve read, have the effect of lowering the peak flood level in the city centre by 150mm.

It’s not just the official designated areas taking in some of this flow of water before it hits the city centre. Water of course doesn’t discriminate – it finds its level, and in doing so also floods the playing fields of St Peter’s School, and parts of Homestead Park, as pictured here.

A couple of facts gleaned from the somewhat sparse information available online via a Google search:
The defences in the Scarborough Bridge/Marygate area and the earthen bank in the riverside area behind St Peter’s School were constructed in 1983. The North Street flood defences were constructed in 1992 and 1993. [Source]