The way we saw the flood

We have a new river since 2000, an endless stream of information. In 2004, Facebook arrived. In 2006, Twitter. In 2007 Apple released the first iPhone. Then there are people like me with websites and blogs. 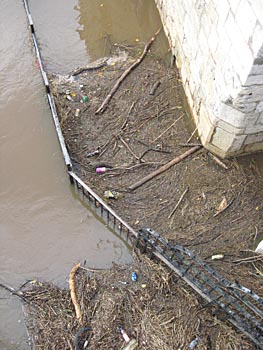 The drama of the flooding Ouse created in turn another flood – of comment and images via the web. A lot of information to wade through, an occasionally wonderful but often wonky world. Photos taken hurriedly on smartphones giving the impression that not only was York flooded, but it was weirdly tilted and perhaps sliding off the planet altogether.

I observed via Twitter the rising concern, as local businesses and Visit York tried to clarify that most of York city centre was normal and not underwater. My own website search stats showed that people were looking for information on particular buildings or streets. One asked ‘Is Micklegate flooded’. Looks funny to York folk, but not surprised they were anxious and asking. Twitter, Facebook, every photo sharing site was filled with this flood of information about the #yorkfloods.

It all looked dramatic, and, like the river, it didn’t always respect boundaries. It’s rather disconcerting when complete strangers point a camera at you, when you’re going about your business, an ordinary person. We tend to forget this. Taking photos and putting them on the web may be a modern phenomenon, but other aspects of the viewing of this flood are deeply traditional. Gawping at other people’s misfortune – we’ve always done that.

A couple of days ago I was in town and thought I’d see whether the flood levels were dropping, by Lendal Bridge, before I headed up Coney Street. At the end of the bridge, by Lendal Tower, a line of people looking over, down to the slope leading to the tower and the house alongside it. I was curious too, and looked down, as two men struggled through the floodwater with a large rectangular object. Their TV. They had a load of stinking river in their house, and they were having to deal with this while an audience watched.

One of the men carrying the TV looked up momentarily. I wasn’t taking photos, so I saw properly his face, and his expression, as he waded through the brown water. I felt ashamed for looking, for being a passing spectator, someone who won’t be there taking up the carpets and dealing with the stink.

He looked tired and resigned and also a bit troubled by our gawping down at him. So I moved away and stood on the bridge a little further along. Instead I took the rather less dramatic image above, of the debris caught in railings near that house. Twigs and other natural things making a rather pleasing pattern, studded with the ugly trash of cans and bottles thrown in the river.

The flood of tweets and uploaded images has subsided, and we’re waiting for the grubby floodwater to do the same, though as can be seen from the photo above, anyone who had this in their house has a lot of cleaning up to do. Whether Twitter and the like will be full of pictures of the rubbish, mud and sewage left behind remains to be seen.

How we saw it then

The archive section of the Press website has many articles on the 2000 floods, including one report about how the events were represented on this newfangled internet thing: “If ever there was an example of how important and useful the Internet can be, this is it.” (The capital letter on ‘Internet’ and ‘Net’ in the article dates it – these have been dropped to lowercase in the years since.)

Also from the Press, 4 November 2000: York inches from disaster. Only phone numbers offered back then, for people in at risk areas needing flood news.

Radio pictures, then and now

One of the most memorable images of the impact of the floods, one I’ll remember anyway, wasn’t a photo at all. It was a woman on BBC Radio York talking about her experience downriver at Acaster Selby, dealing with a flooded house, stranded livestock, having to send her children to stay with relatives. @BBCYork are on Twitter too, and Facebook, but through allowing people to speak at moments of crisis they bring us a vivid picture, in that particular way only they can. Good old #localradio @BBCYork, as we might say on Twitter.