York floods, 1970s, before the defences

I was on YouTube, looking for something else, when I found this short film. Very happy to find it as it illustrates what I was trying to describe in some of the pages written during the floods in September.

The Ouse is high again, and there have been the usual flood photos on Twitter etc. But this film shows what it was like before the walls and floodgates were constructed at the bottom of Marygate and in the Tanner’s Moat area near Lendal Bridge.

Uploaded to youtube.com by tebbuch, who says that this film dates from the 1970s. I think it must be the floods of December 1978. More information below.

From around 0.22: the bottom end of Marygate. The Bay Horse pub is a recognisable landmark

0.30 – people getting out of their cars apparently to have a good gawp, just as we still do, though they can’t yet post wonky photos of it on Twitter …

1.25 – near the Bay Horse on Marygate, on the opposite corner is a shop (recently a dental practice), which is knee deep in water (as illustrated by the gentleman and two policemen wading through it) – actually, thigh deep.

1.38 – change of location to the Wellington Row/Tanner’s Moat area. Building on left now the Cycle Hub. Shots of the garage which used to be on the site of the Aviva office.

1.54 – another good illustration of how things used to be – Rougier Street, under flood water (looking towards the city wall, visible in the background), with car driving through, followed by a shot taken from, I think, the end of Tanner Row, looking towards the ‘garden’ area alongside the river. Where those open railings are between brick piers we now have a solid flood wall with steel gates to close in times of flood.

2.10 – not sure of location, but clearly near the river [update: it’s North Street, see comments below]

2.21 – a rather dramatic shot of the Ouse Bridge arches, on the Queen’s Staith side

2.45 – note advertising billboards on buildings near Ouse Bridge, on what is now a rather posh place. 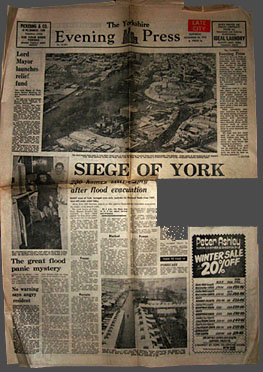 And I just happen to have a copy of the front page (most of it anyway) of The Press (Yorkshire Evening Press as it was in those days) from 30 December 1978, which reported on the floods of that time under the front page headline SIEGE OF YORK. It reported that 200 homes had been evacuated, in the worst floods since 1947.

The paper also reported a mystery rumour ‘which swept the city’ that all road bridges over the Ouse were to be closed at 3pm. This resulted in general confusion and more pressure on the ‘already heavily loaded police and council telephone switchboards’. Thank goodness for Twitter, eh?

The same report includes a reminder of how much has changed since we lost/reduced our industries, our factories, how many people they once employed. Because of the disruption, Rowntree Mackintosh (as it was then), sent most of its 8,000 workers home, and 6,000 British Rail staff (3,000 at the carriageworks) could go home if their houses were affected by flooding.

It may seem like ancient history to people in their twenties, but this is within the lifetime of so many of us.

In this city we had small-scale industries employing a few people, then we had factories employing thousands, now we’re back to the smaller scale.

I’m glad that back in the 70s someone was not only gawping in wonder, but recording it, and that this record is freely available on the web.