York Central update: reaction to outline planning approval, from York and beyond 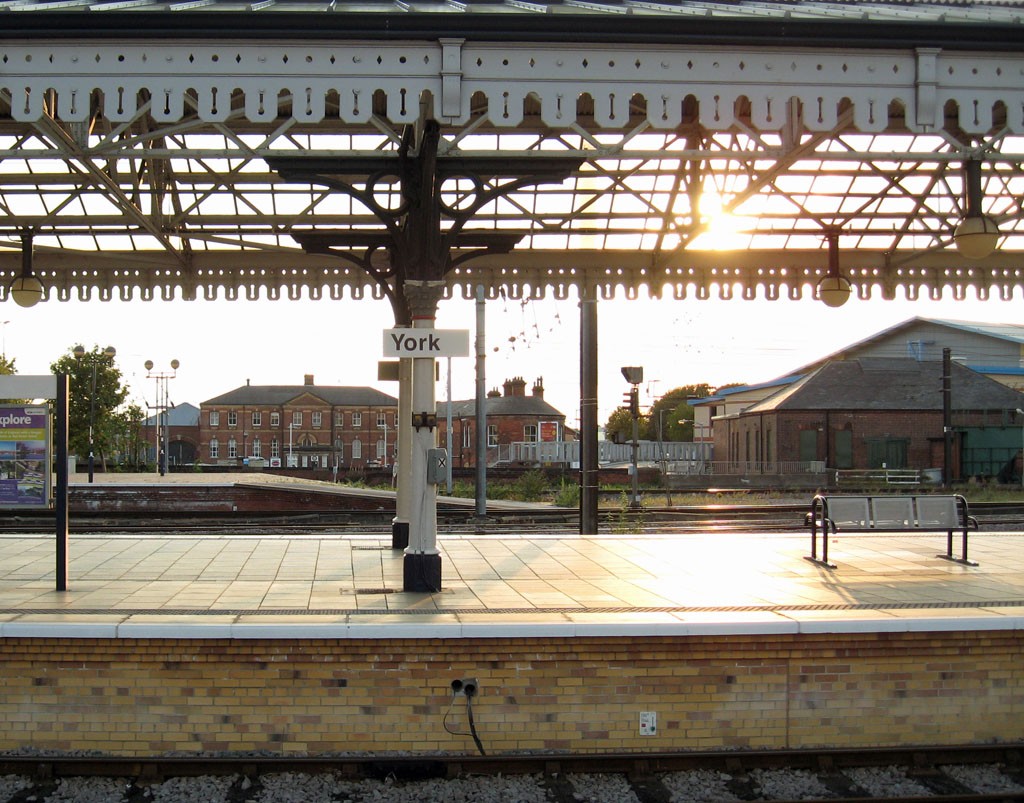 Previously, some weeks back, I left us standing by the riverside admiring Scarborough Bridge. I had intended to stay by the riverside, and focus on proposed flood defence works, but the flow of planned pages was interrupted, and the writing dried up for a bit as I had to attend to other commitments. But let’s take up near to where we left off. As Scarborough Bridge is so close to the railway station, and there are significant developments in plans for the land around it, let’s hang around the station area for a while.

From Scarborough Bridge we can head off up the path by the sorting office, and up the cycle/pedestrian path to access the station from one end. Across the platforms at this end, as pictured above, we can see through to part of the National Railway Museum and one edge of the piece of land known as York Central. I’ve written about it many times in the past, but not recently.

As was widely reported in the media last month, the outline planning application for this huge and complex site was approved by the planning committee on 25 March. That’s obviously a major milestone in what has been a long-running project. Reaction has been rather mixed, and interesting, and I wanted to write something about that, and some coverage of it in the Yorkshire Post this week.

A year ago today, 27 April 2018, I paid a visit to the My York Central exhibition/consultation event at the NRM on the York Central plans. The display boards were covered by an impressive number of post-it notes, with many ideas and responses. 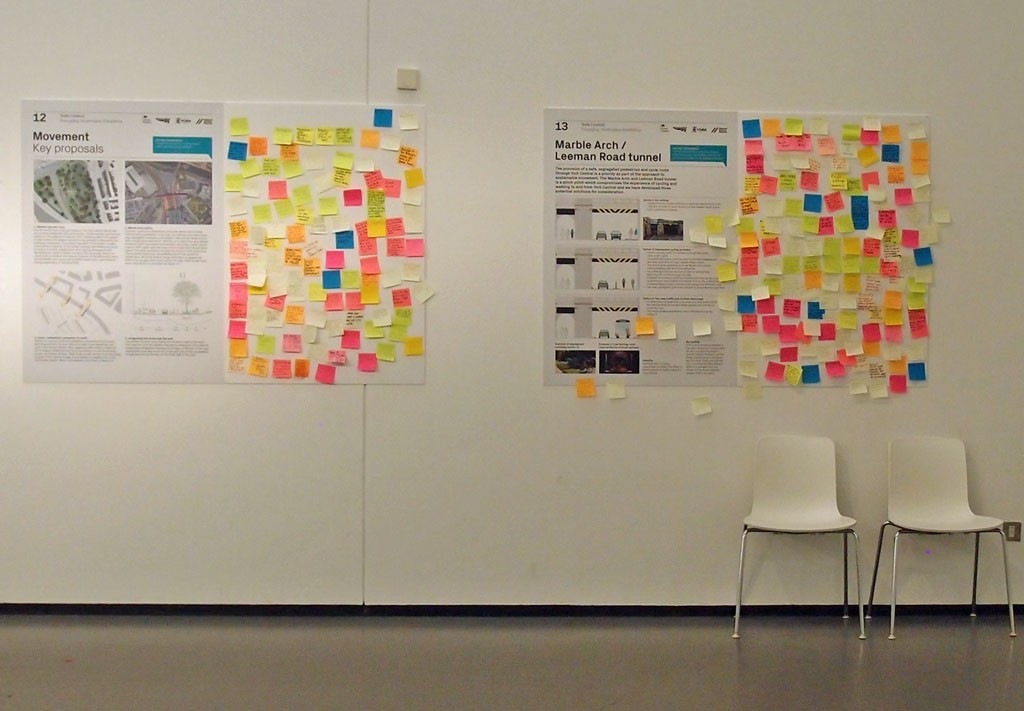 Post-it notes on exhibition boards at the NRM, 27 April 2018

Clearly many people put a lot of time and effort into engaging with the plans, wanting to help shape them.

It’s important to acknowledge the huge amount of work that has gone in to this project to develop the large area of land behind the station. It’s important to acknowledge how long it has taken, in terms of years, and in terms of the many hours of work by many individuals, organisations, companies over that time, and particularly in the last year or so.

Many of the people who worked on putting the outline planning application together have been handsomely rewarded financially. It’s also important to recognise that many people, whether as part of a group or as individuals, put in a commitment, many hours, and didn’t get paid for that, but did the work because they care about the future of the city.

I wasn’t one of them, I’ve had to focus my energies elsewhere, but have done my best to keep up with happenings, including watching parts of the webcast of the planning meeting to decide whether to approve the outline plans.

The meeting included excellent and passionate speakers, and many strong objections.

But of course, by that stage, it would be approved. This long-running saga of the old ‘teardrop’ site has been going on for years, and so much work and time has gone into getting it to the stage of an actual outline application.

I’m not on Twitter much these days, but did check it for comment and reaction during the planning meeting and in the day or two afterwards, as the news of the application approval was reported. Anger and dismay was expressed in many tweets from local residents who had campaigned against various aspects of the plans, with things getting a bit heated and personal at one stage, on Twitter (as things so often do on Twitter).

Alongside the anger, and forming a striking contrast, were many celebratory and triumphant comments from organisations and companies who had been involved in developing the plans to this stage, pleased that the plans had been approved. It looked like a complete divide, opposing views.

I looked for something that might balance it out, from someone who knows the city well and has been observing the city and its goings-on for longer than I have. In such situations I often look to see what Steve Galloway thinks. His view is that ‘the progress made in bringing forward the site will probably be recorded by history as the major achievement of the current Council coalition administration.’

Still another stage to go through yet, however, as a call-in request means Communities Secretary James Brokenshire is considering the plans, and could order a public inquiry to scrutinise the project, as reported in the Yorkshire Post earlier this week.

York Civic Trust and the city’s MP Rachael Maskell are opposed to the plans, and support a call-in and further scrutiny. As would many of the people who spoke at the meeting on 25 March, I would assume.

On the other hand, the Yorkshire Post reports that

‘two Yorkshire council leaders, Wakefield’s Peter Box and Bradford’s Susan Hinchcliffe, have now written to the Minister along with Ben Still, the director of the Leeds City Region Local Enterprise Partnership, to reassure him about the level of support for York Central.’

I’ll just leave that there, and you, dear readers, can decide who might know best about the level of support, whose support is being referred to, etc. Otherwise I might start going on about ownership and cultural significance, etc, again.

The Yorkshire Post too has a view, presumably in response to the above, published a couple of days ago (25 April). Headed ‘The Yorkshire Post says: Landmark York Central development offers county-wide benefits’, it refers to the ‘political, business and civic leaders from across Yorkshire who want to maximise the benefits that can be accrued’.

The development opportunities of York Central seem to have been enthusiastically embraced by many, but it does rather look like this huge development is something on its own, a kind of separate thing to the city, and that it has failed to connect to the energies around it, those demonstrated by the passionate people who had high hopes for the site.

I’d prefer to think that this important place, once a thriving industrial area, a heart of York, still felt like ‘ours’, something the people of York will feel connected to, proud of, fond of, part of. It’s not looking that way at present. I hope that in time that will change.

York Stories is my personal perspective on York and its changes. It has been online for 15 years in various forms, updated frequently sometimes, at other times with quite long gaps between its observations/musings. I’ve been online browsing, connected to this thing called the internet, for 20 years. Among the increasing amount of content and all the sound and fury of social media I find I appreciate more the more thoughtful things I find,  a considered view, a long view. As a York born-and-bred person who has memories of this city going back to the 1970s I do my best to add my bit to the online world in a thoughtful kind of fashion, and keep the angry/opinionated stuff to offline discussions at the kitchen table. If you’d like to support this online thing, with its monthly hosting bills and its generally tranquil and advert-free environment, your virtual coffees are always appreciated – essential actually – in keeping it online.