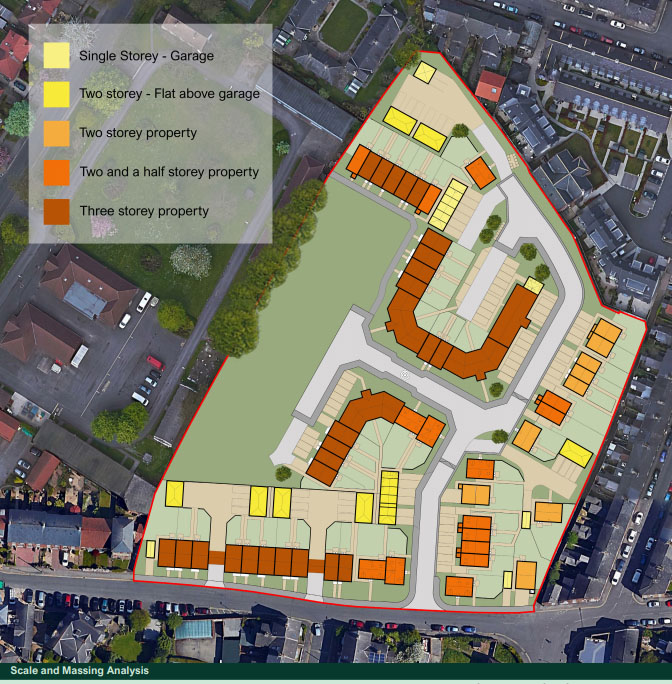 Time to emerge from winter hibernation, to mention this …

— which has recently appeared on the council’s planning portal, some time after it was reported in local media. (If that link doesn’t work, go to https://planningaccess.york.gov.uk/online-applications/ and put 19/00246/FULM in the search box.)

A while back I mentioned the exhibition on the proposals for the site, and later wrote about aspects of the history of this valuable piece of land. But at that point we didn’t have an actual planning application, and now we do. Now it’s all official, and will at some stage go to the planning committee for approval. Not this month I hope, as we haven’t really had long enough to look at it properly.

As is always the case, there are many documents, reports, diagrams, maps, plans. So far most of them are those submitted by the applicants, with very little input as yet from the public or from council officers and statutory consultees. Neighbours are supposed to comment by 11 March, as the official letter sent out to local residents stated. 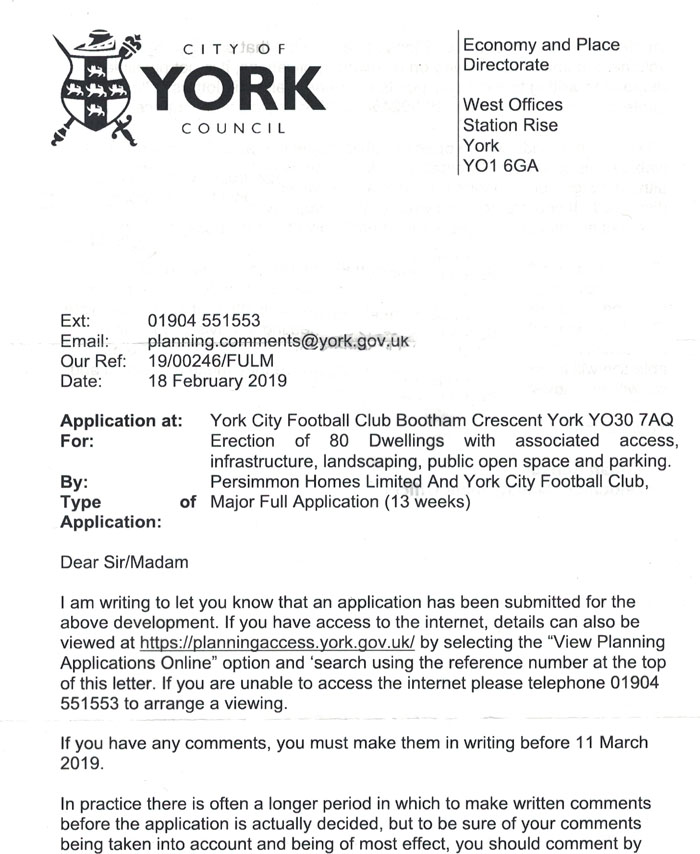 From CYC, delivered to local residents

Seeing this brought back unpleasant memories of 2002. But I’ll try to forget those, and focus on this present application, which unlike the 2002 application seems unlikely to be abandoned (or ‘Finally disposed of’, as it’s described in an interesting list of the football ground’s planning history on the council’s planning portal).

Of most interest is probably the Design and Access Statement (PDF on this link), which gives an overview of the various aspects of the development.

There’s to be some kind of marker of the centre of the pitch. As the document states, the site could/should

incorporate features which make reference to the site’s soon to be former use as a football ground, for example, through the marking of the centre spot within the development proposal.

So the development includes

the creation of a feature point around the location of the pitch centre spot.

Which seems appropriate and welcome, but looking at the illustration and further detail it’s hard to see how this will work as anything particularly impressive, as it appears to be in the middle of a road.

The secondary route to the west features an open vista through to the public open space. It incorporates a pinch point in which the road narrows to a width of 3.5 metres to slow vehicle speeds as they approach the public open space. This allows for the creation of a feature point around the location of the pitch centre spot.

an area within the public open space will be allocated as a place for remembrance as well as there being permanent reminders of the club’s long history on the site.

I couldn’t find any more detail on this, but a proposed laurel hedge shown on one of the documents, in the green space to the west, may be connected with it.

Some aspects of the ground’s history, heritage, and significance have been previously highlighted on these pages.

In response to the documents recently made available with the planning application it seems appropriate now to think more about the impact on the natural environment and the non-human creatures that also frequent the site.

Among the documents submitted as part of the planning application there’s a bat survey, and ecological appraisal, and an arboricultural report. All three were prepared by Quants environmental. I assume/hope that the council’s own officers will respond to these in due course.

As previously mentioned, at the edge of the planned green space to the west of the site, on the MoD/Duncombe Barracks side of the boundary, there’s a line of mature trees. The arboricultural report (PDF here) submitted as part of the planning application states that

It is recommended that all trees along the western boundary are retained due to their large prominent size and the area of mature urban tree canopy cover they provide in the local landscape.

Good to read this, though it doesn’t guarantee their survival. A few years back the largest of these ash trees was felled when the MoD built a new firing range (15/02506/FUL). Not pleasant to see men with chainsaws taking down a healthy ash tree. The location of the planned open space next to these trees should mean that no further damage is done, I hope.

The ecological appraisal report (PDF here) is dated June 2014, so it’s not exactly a current appraisal of the site.

It provoked a few thoughts and questions, regarding how a site is seen by a professional surveying it rather than a person living close to it day to day, year after year.

It makes the place sound a bit dull.

Due to the urban nature of the site, regular disturbance, intensive management, lack of connectivity and minimal vegetation the site was not considered to be of significant value to bird species of moderate-high conservation value, with only common species such as rock dove and blackbird likely to use the site for breeding purposes.

The ground and its pitch has had far more wildlife value than that, I’d suggest. Swallows were to be seen frequently around and over the football ground in summer 2018. Perhaps not actually nesting in the stands – though perhaps the council’s own ecology officers could look into that – but clearly attracted to the large green area, despite the ‘intensive management’. Then there are the swifts that screech across the sky over the stands every summer, and the tawny owls I’ve sometimes seen and heard when they’ve perched on the wall at the Grosvenor Road end and called into the night, and all the birds that find worms in the well-watered pitch when other grassed areas are too dry and drought-parched (eg summer 2018).

All will have to adapt to the reduction in green space, as they’ve had to do in so many other places.

There will of course be planting/landscaping of the small garden areas to the front of the houses. Will these be full of planting that in some way, perhaps in an intelligent and inspiring and well-informed 21st century kind of way, tries to compensate for the reduction in green space and the impact of that? Perhaps plants chosen to support bees and other insects? Or perhaps edible and interesting things? Maybe walnut trees on the green space area?

This is quite a large development, and an opportunity to do a little bit of good, to make up for so much habitat loss. But then it’s a housing development to make profit, so it probably won’t.

As previously mentioned, a Historic England project is recording and representing aspects of the heritage significance of the ground. Fans, local residents and businesses are encouraged to get in touch via BoothamCrescent@HistoricEngland.org.uk.

A recent short film includes interesting insights into the ground and its history, including the tunnel behind the Popular Stand. The first film in the series is on this link, where you’ll also find others in due course, as more are planned and in production.

Tony Cole (whose excellent photos illustrated a piece I wrote some years back on King’s Square) has published a book, Home End. (More here.) I haven’t yet seen the book but I know that Tony has been taking photos in and around the ground for years now, and they’ve captured the spirit of the place beautifully, and poignantly. Like this one. 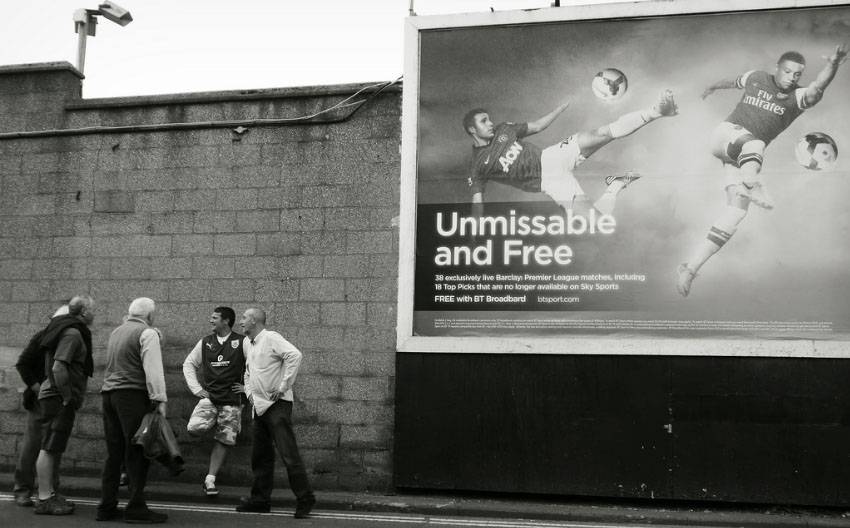 It’s difficult to imagine the future of this piece of land with all those houses and cars on it. But we have to. And, as a neighbour of this ground, for 22 years, I have to think about the boring detailed bits like the height of the buildings proposed. I hope it’s not going to be like this.

www.yorkstories.co.uk has been online for quite a while. It’s a resident’s record of York and its changes, a personal perspective on the city of York, UK. These days this long-running internet thing of mine is added to somewhat sporadically, around other commitments/writer’s block/winter blues, etc. It’s still supported by your virtual coffees and appreciative words. Thank you.