So, we’ve left the footbridge over the railway lines, and we’re on one of the many streets created outside the city walls in the 19th century to house the workers in the flourishing industries. 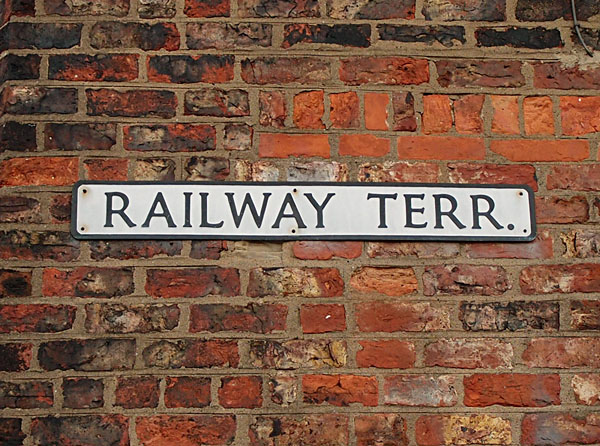 It’s a while since I’ve been along this street. On an evening visit in August 2014 I noticed this pleasing corner, and an old school I was completely unaware of. And when looking at these photos later, what’s probably another ‘ghost shop’ in the line of newer brick on the corner of Railway Terrace, to the right. 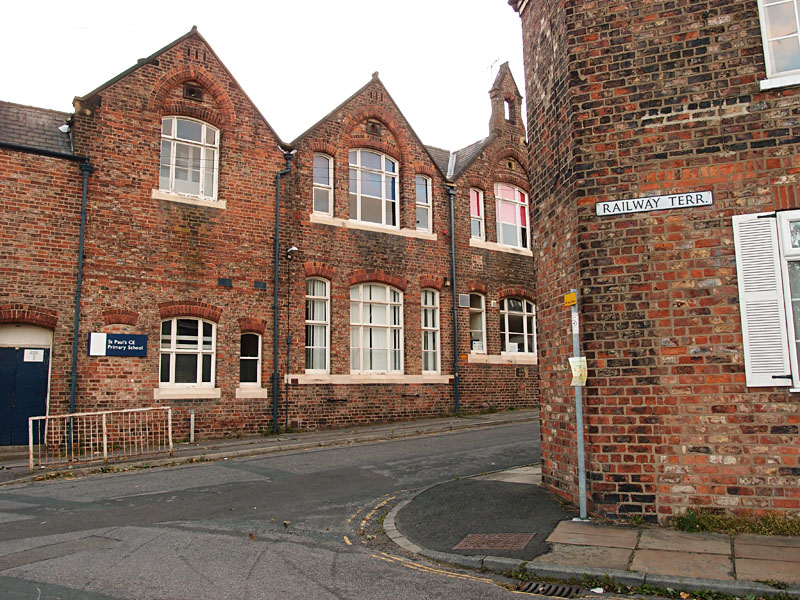 The school has one of those segregated entrances, marked in this case, on the entrance I noticed, ‘INFANTS’ and ‘GIRLS’. Such segregation is of course a thing of the past, but it’s nice that our buildings carry these reminders of old norms and values.

Railway Terrace becomes Watson Street at this corner, though the name change here seems a bit random, as it feels like the same street when you’re walking along it, a straight and purposeful line alongside the rail lines to Holgate Road and Holgate Bridge.

The main reason for going along here was to record a particular change. In August 2004 I took this photo of the pub here on the corner of Watson Terrace and Watson Street: The Locomotive. 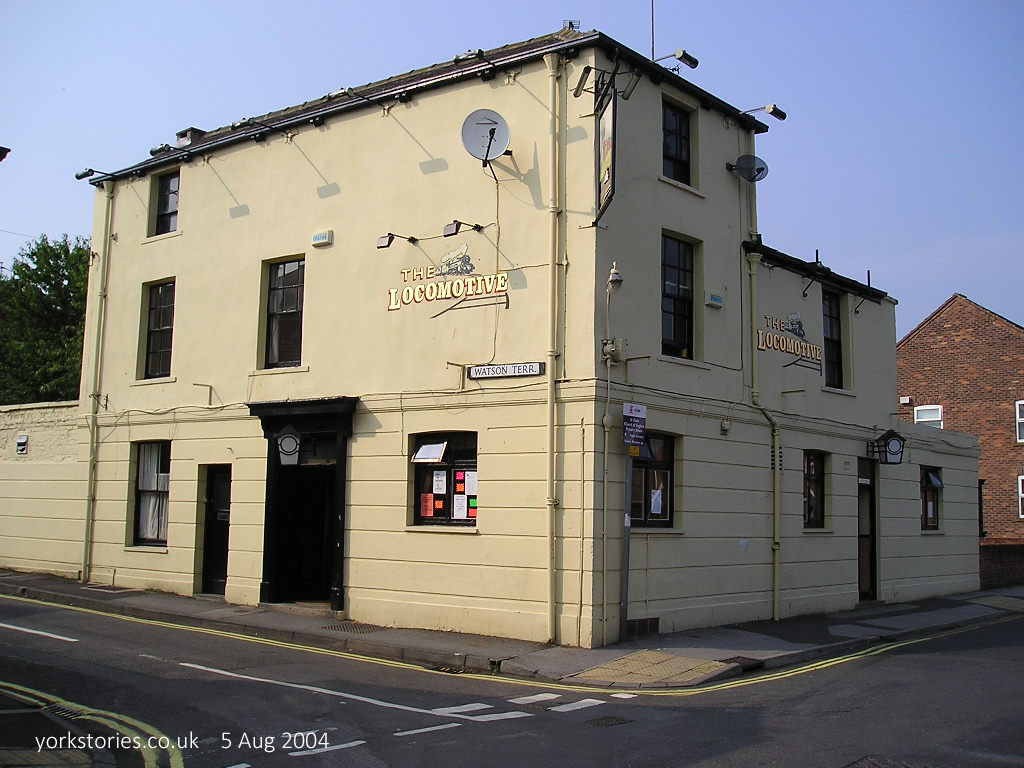 I took just the one photo, in passing. I can’t recall why, ten years on, but I assume it was either because of the name (I was on a railway-related wander at the time) or because it was going to be demolished.

Here’s what has replaced it. Housing, of course. We need housing more than we need pubs. 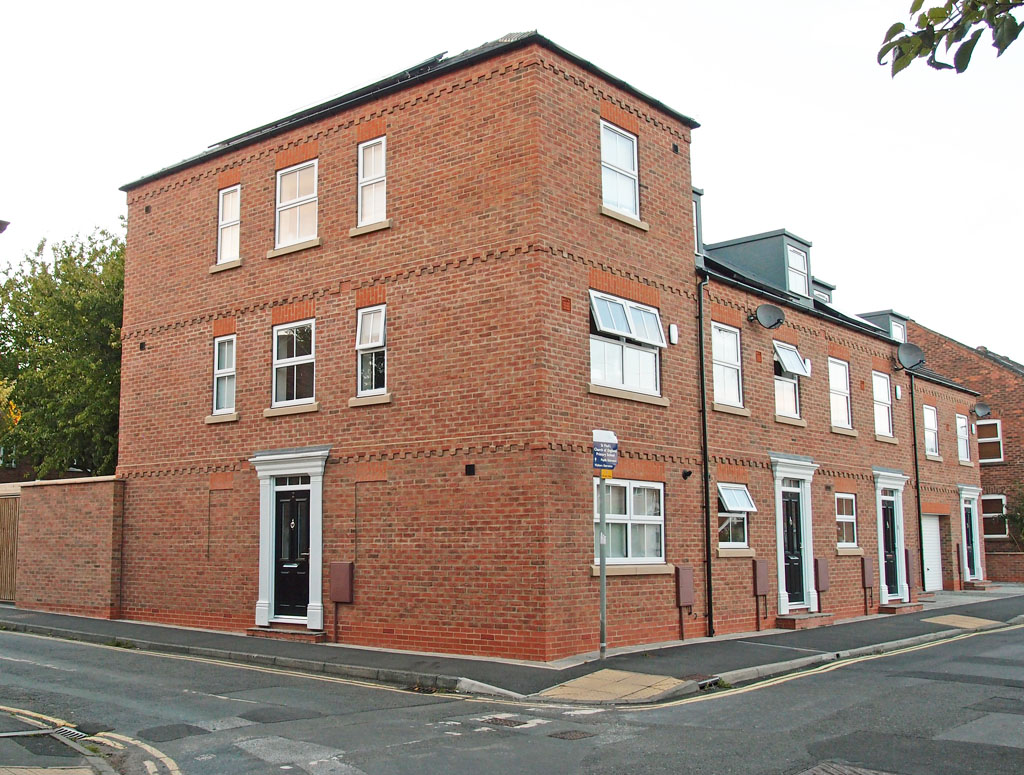 Housing on the site of the Locomotive pub, 2014

And just along the road, the next photo I took in that 2004 batch was of a sign of a type very familiar at that time. Many small plots of land were being sold for housing, as I realised on my wanders. The ends of long gardens, the ends of short gardens, bits of land that had once been home to various small workshops. 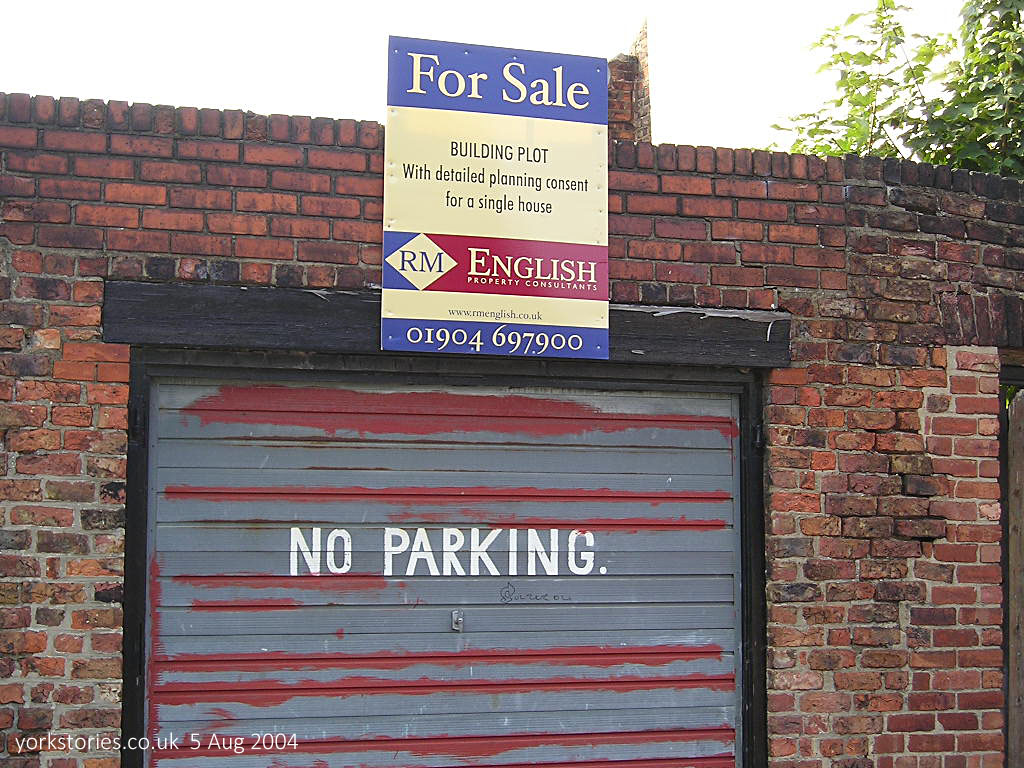 It has a house on it now: 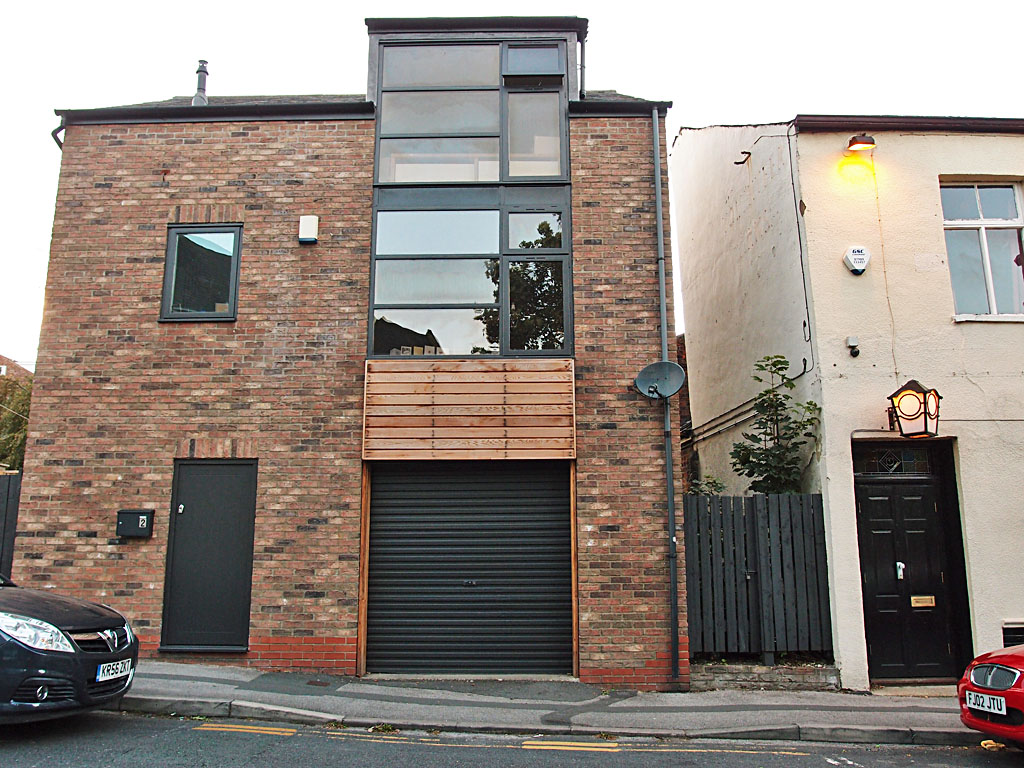 In between the two building plots, a pub called the Volunteer Arms soldiers on despite its companion pub being demolished.

Two pubs next to one another clearly wouldn’t be sustainable now. But back then they both were. And a few decades ago they were busy and thriving, particularly on Friday lunchtimes, so I’m told. More on that story later. 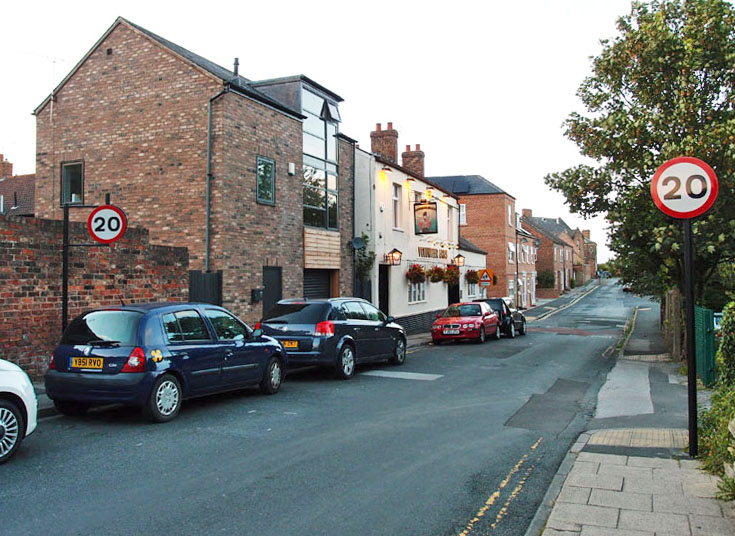 At the end of the street, this striking church, another Victorian building. 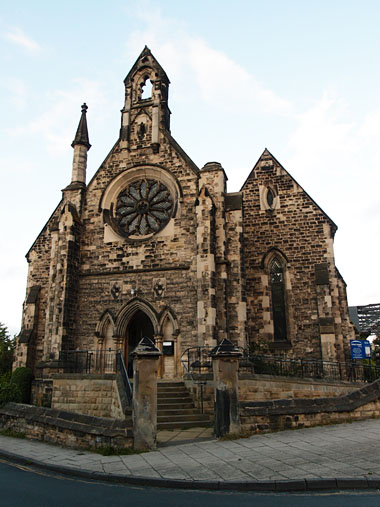 I have a press cutting from almost 20 years ago showing the vicar, Rev Derek Wooldridge, in front of a sign put up on the church railings. They were praying for the carriageworks (ABB). 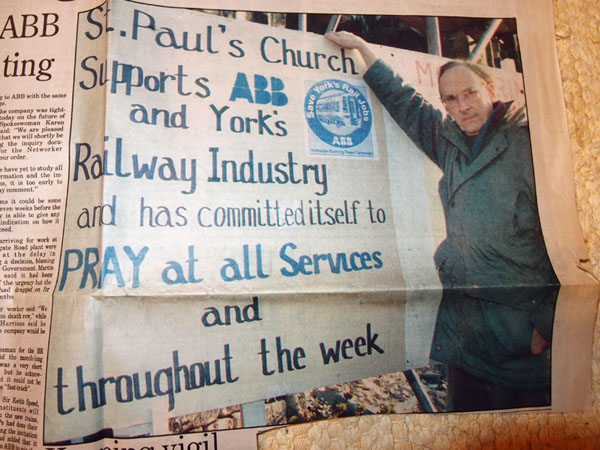 Across the road, in my walk of a mere two days ago, I noticed this for the first time, on Holgate Bridge: 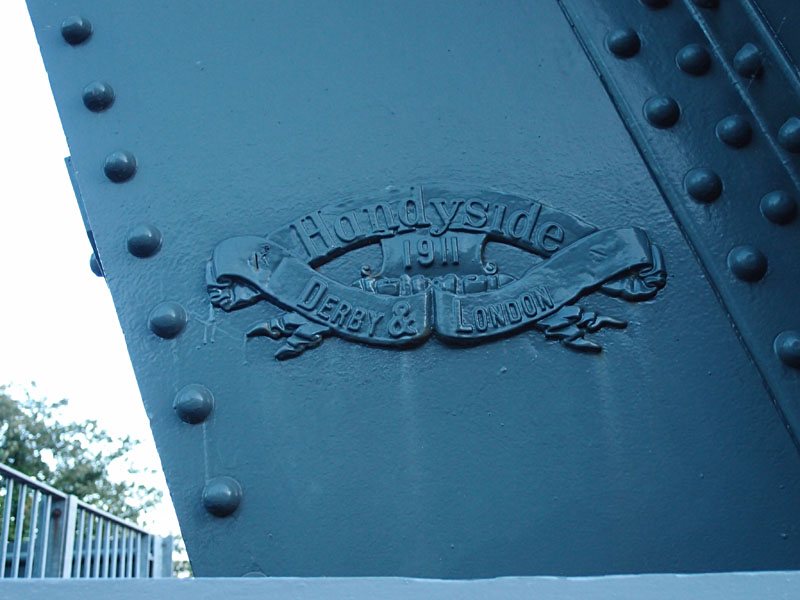 I guess I walked past this many times in my youth and never saw it. Or, more likely, I saw it but didn’t care. So if you don’t care you don’t register and remember. On this occasion I’ve not only registered, but photographed, admired, and Googled it, and found this very interesting information.

Underneath Holgate Bridge, behind St Paul’s church, is what used to be a cattle dock (see this comment from David Bower for more information). I didn’t know that when I wandered down there in 2004 and took this photo. Instead I was remembering a youth club in the church, circa 1983, and wandering down here in the dark with friends, looking out over the lines. 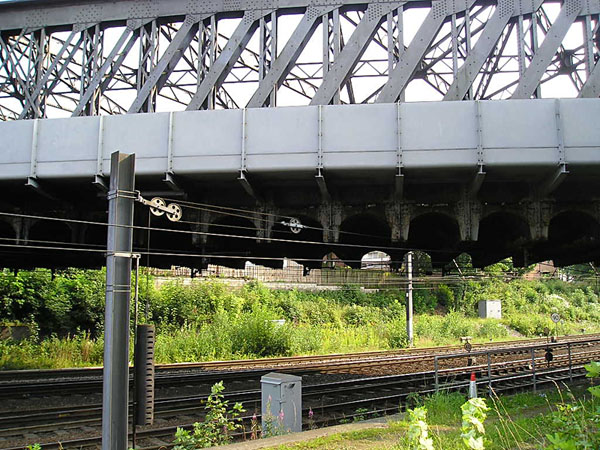 Another photo from the same day ten years ago. The thing I’d travelled over many times for years in my childhood and adolescence and never given a thought to suddenly looked handsome and impressive. 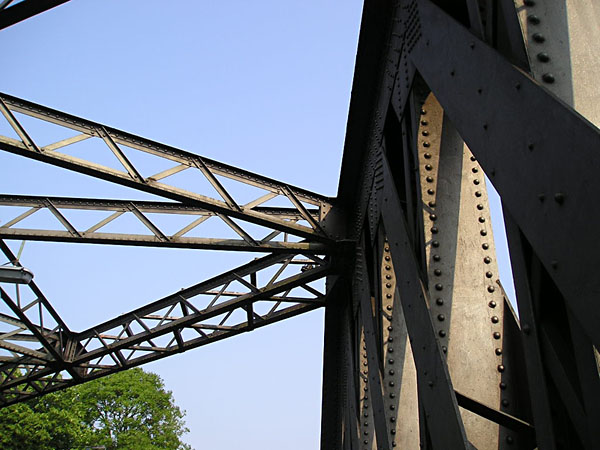 So here we are, on the bridge. Which way next?

Lisa @YorkStories is the creator, administrator, and writer of content on www.yorkstories.co.uk. She can be contacted on this link or via Twitter, @YorkStories
View all posts by Lisa @YorkStories →
Tagged  2004-2014, Holgate
To link to this page's proper location please use the > permalink