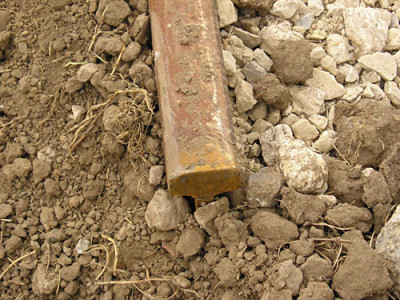 Ten years ago, on 27 July 2004, I walked down Holgate Road and along Poppleton Road, through the beginnings of ‘Holgate Park’. What we knew as the carriageworks site. I hated it all. The older page from back then explains why.

A week ago, on 27 July 2014, I cycled over Clifton Bridge and took a left down Poppleton Road, to the now well-established Holgate Park. One of the ‘ten years on’ visits I’ve been trying to do. A particularly important one so I made a point of revisiting on the same day, ten years on. Also, I’d heard about the Poppy Road Project, and wanted to see that, but only got half the story, and was imagining an area of red poppies, somewhere near the Fox pub. What I found was a great bright meadow of wildflowers all around the sculpture commemorating the carriageworks, part of which is shown in that image above. 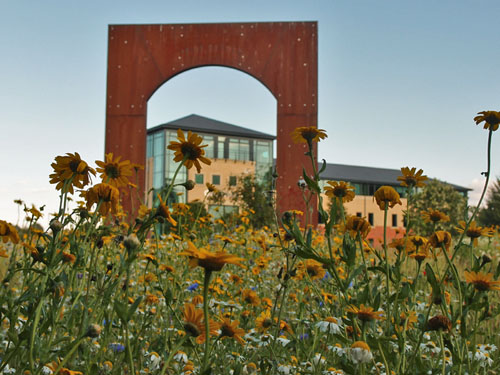 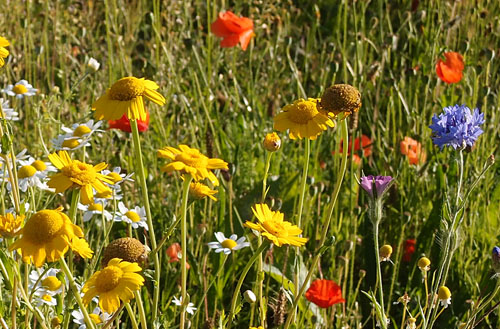 Not just poppies. Multicoloured loveliness in the evening sun. It was stunning. I stopped here for much longer than I intended to. 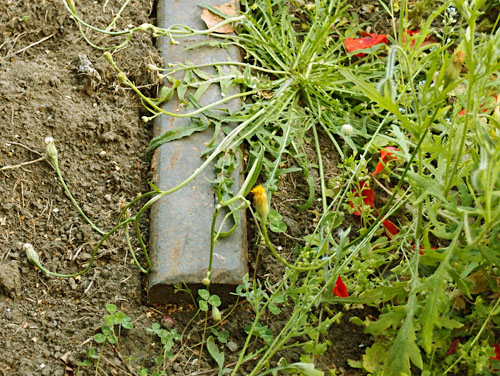 The wildflower meadow here was planted to commemorate the First World War, but like all good things it seems to have more meanings than just the one and will be appreciated by many people for many different reasons.

Like I said, Holgate Park and its sculpture, ten years ago, seemed like a mean little substitute for what we had, and I’ve not wanted to walk past since. It was like it had all shrunk, was soulless, compared to how vigorous and busy and industrially beautiful it was before. I feel bad saying that as I know people worked hard to regenerate the place.

It needed these flowers to regenerate it. This small part of it is transformed, inspiring, and heartening. 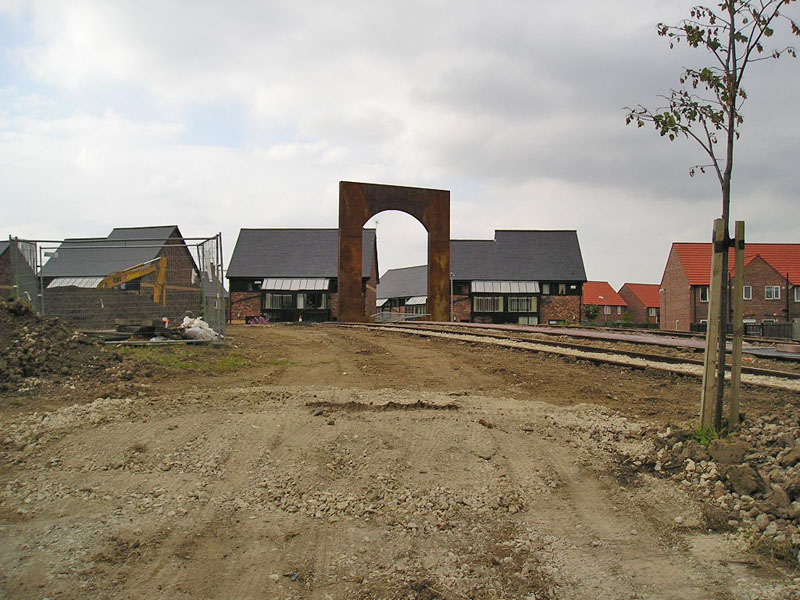 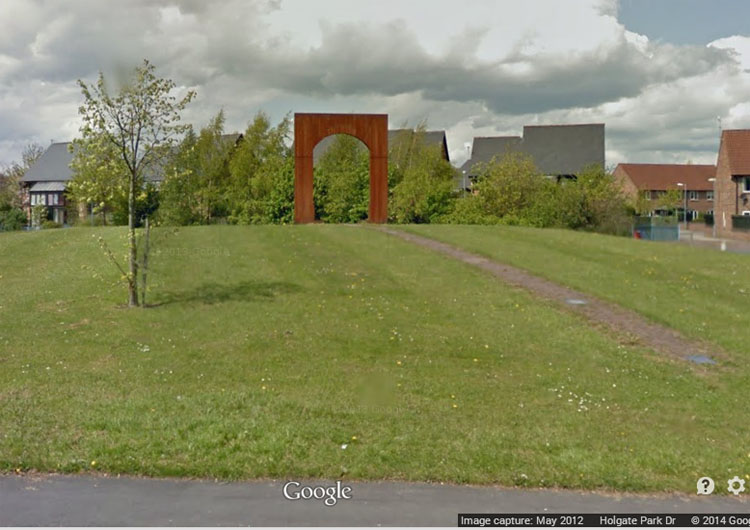 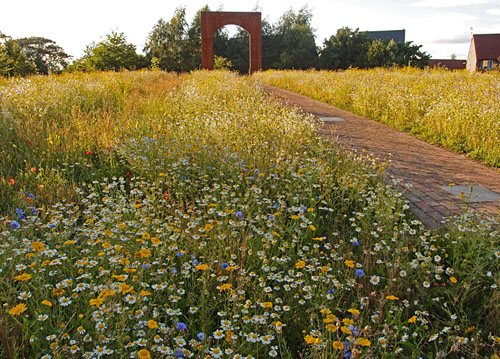 I know it looks so sentimental and soppy, but — the wildflower meadow around it was like a big hug for the thing, and what this place meant. I realise that the impetus for it was a First World War commemoration, but in a broader and bigger way too it’s like a part of this piece of land so changed and reduced got its heart back.

While I was up here admiring the flowers I had a wander through its sunlit arch and noticed the details that weren’t here in 2004, when it was under construction. The pathway to the arch has metal plates set into it, recording/commemorating railway companies. And then there’s a map. 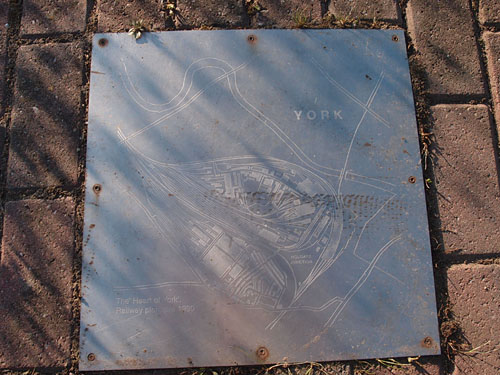 I was very struck by the caption (try to ignore the weird mistake in the inverted comma): 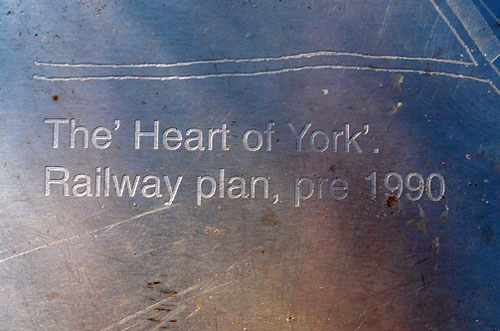 ‘The Heart of York’. It did look like a heart, this railway land, as I noticed a while back in this aerial image of the area in the Britain from Above collection (York Racecourse, the Railway Station and Railway Works, York, 1947): 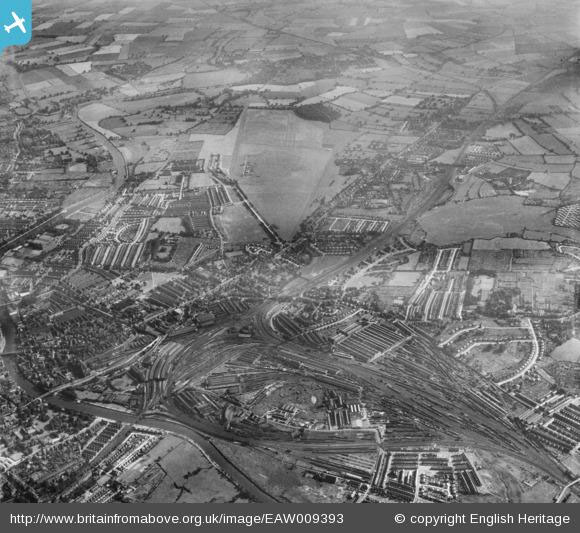 A Google search turns up no written references to this area being commonly known as the ‘Heart of York’, but the metal plaque records it, and I remember it being described this way, in our recent history. More on that soon.

The way I see the area now is affected by how I remember it. A bit like that image above, but from the perspective of the top deck of a bus, going to school. My memories are no doubt a bit skewed and distorted with the years, as it’s thirty years ago, more, that I’m thinking of, remembering a long wall alongside Poppleton Road from the end of the Victorian terraces, and behind that wall the massive open area of railway land, and in particular a 1950s/60s pre-fab type building, where the apprentices trained.

One of the old Fairbank archive photos I have seems to show that very wall, though in my memory it’s a taller wall. Here on the left in an image taken about a hundred years ago. Probably just before the start of the First World War, before the streets of housing on the right were built: 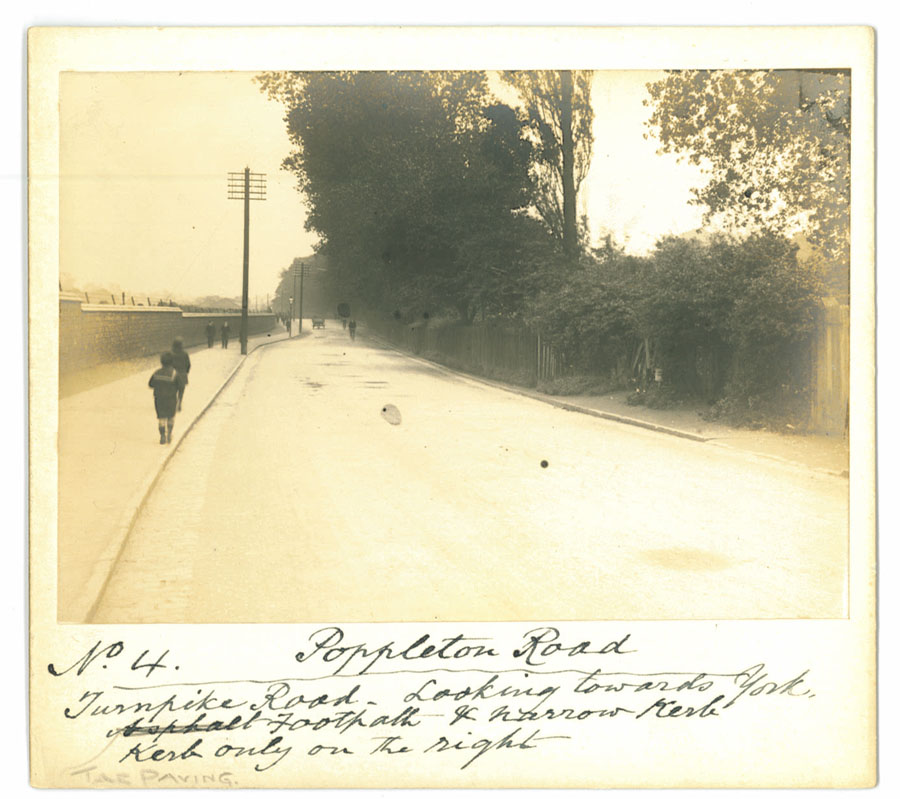 After I left the beautiful meadow I wended my way past CPP towards the place I was heading to originally before wildflowers distracted me. I took more photos, and had too many thoughts, and too many photos, to include on this already long page. While I was taking some of them a man I’ve never met before gave me a flower. I stuck it on my bike as I cycled away from those railway lands.

Thank you, Poppy Road Project, and the man on the gate, for putting some heart back in to the place.

Lisa @YorkStories is the creator, administrator, and writer of content on www.yorkstories.co.uk. She can be contacted on this link or via Twitter, @YorkStories
View all posts by Lisa @YorkStories →
Tagged  2004-2014, Fairbank archive, Holgate
To link to this page's proper location please use the > permalink