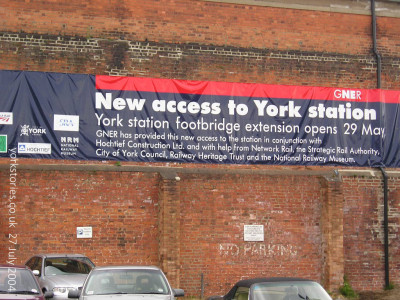 Back in summer 2004, on a couple of occasions, I went for a wander with my camera through the railway lands, via the alleyway from Leeman Road near the back of the railway station. I’m sure many of us are now used to having access to the station from the car park on Leeman Road, but it’s a relatively recent thing, as this photo from 2004 reminds us.

But we’re not going that way, we’re going up part of Cinder Lane. Perhaps surfaced in previous centuries with cinders from The Destructor, now a more smoothly-surfaced pedestrian/cycle route.

From Cinder Lane we can see into the massive area of railway land. It’s not particularly beautiful, but it does have its moments. If you like peeling paint and old rusty things. Which I do. 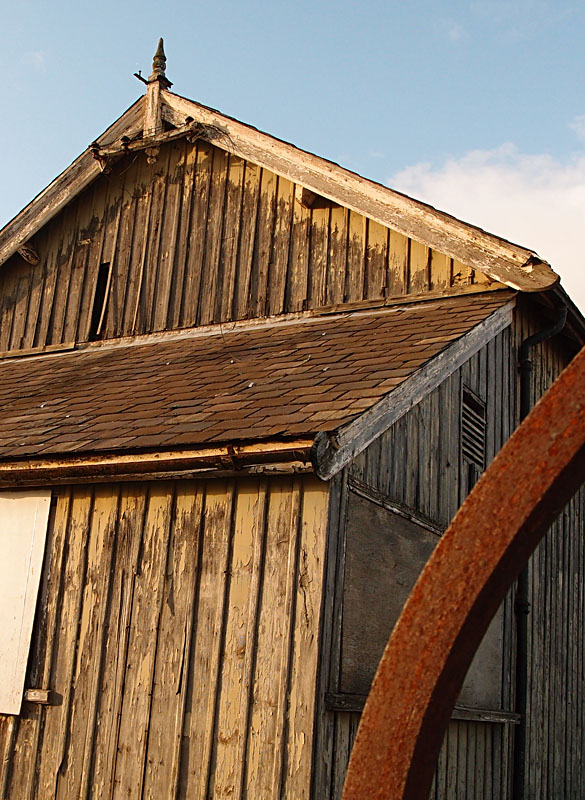 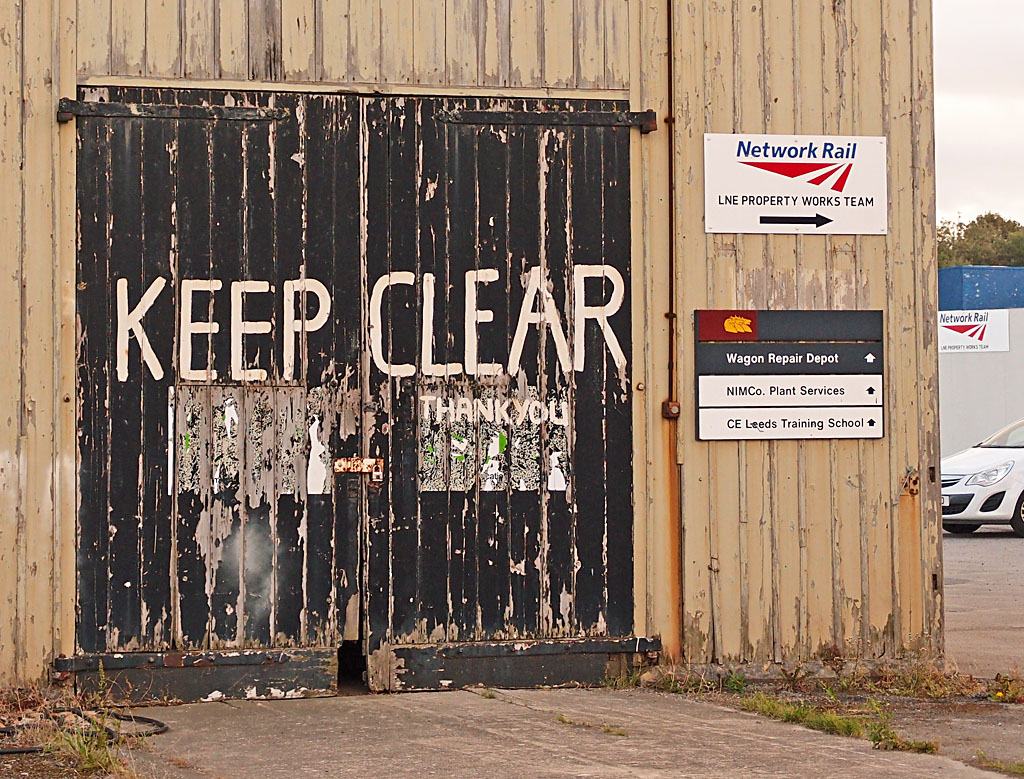 These signs indicate what used to go on here, and possibly some of it still does. It’s not particularly clear what happens here these days, but it has clearly been cleared of some of the things I pictured back in 2004. But not this old shed, with its signs, which is apparently still in use and must be KEPT CLEAR, though the doors look like they’d drop off if you tried to open them, possibly taking the rest of the building with them.

The shed and other decrepit things from 2004 are in a small album of wonky photos I’ve stuck over on Picasaweb/Google in case anyone’s interested.

Also most of the images on this page can be enlarged, should you wish to see more detail. (Though not in this next one, as it’s artistically blurry.) 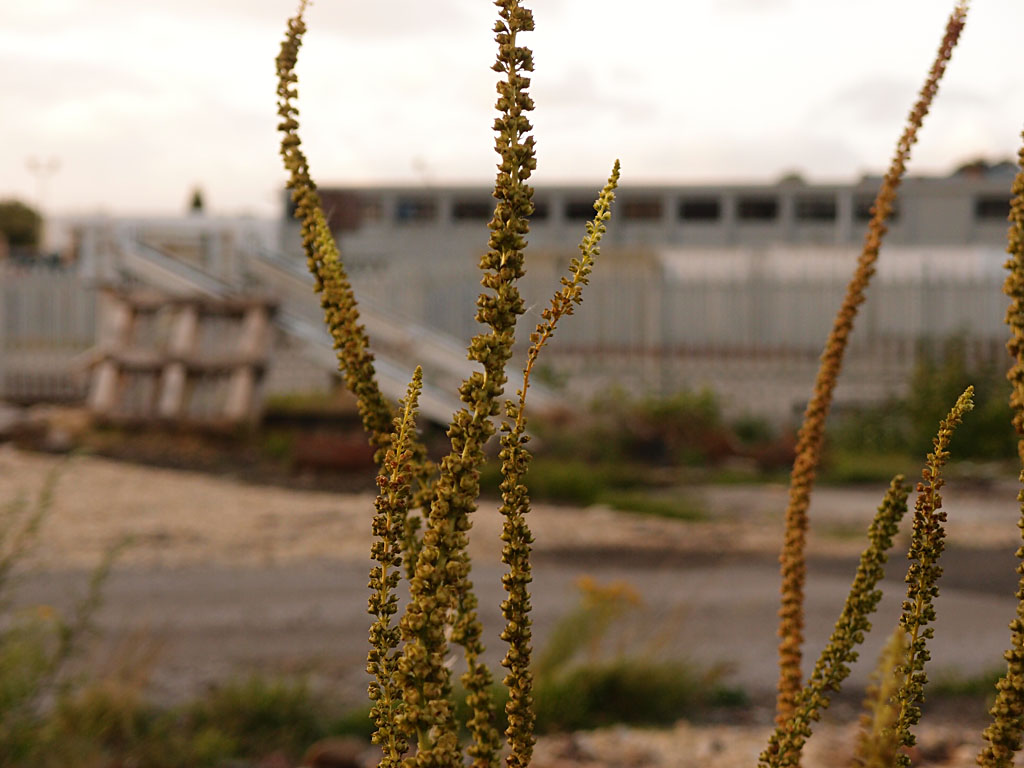 It’s all a bit weedy, though not as full of vigorous shrubbery as it was in 2004. In this area shabby brick workshops have been replaced by grey buildings sitting in a sea of grey rubble-filled dullness. 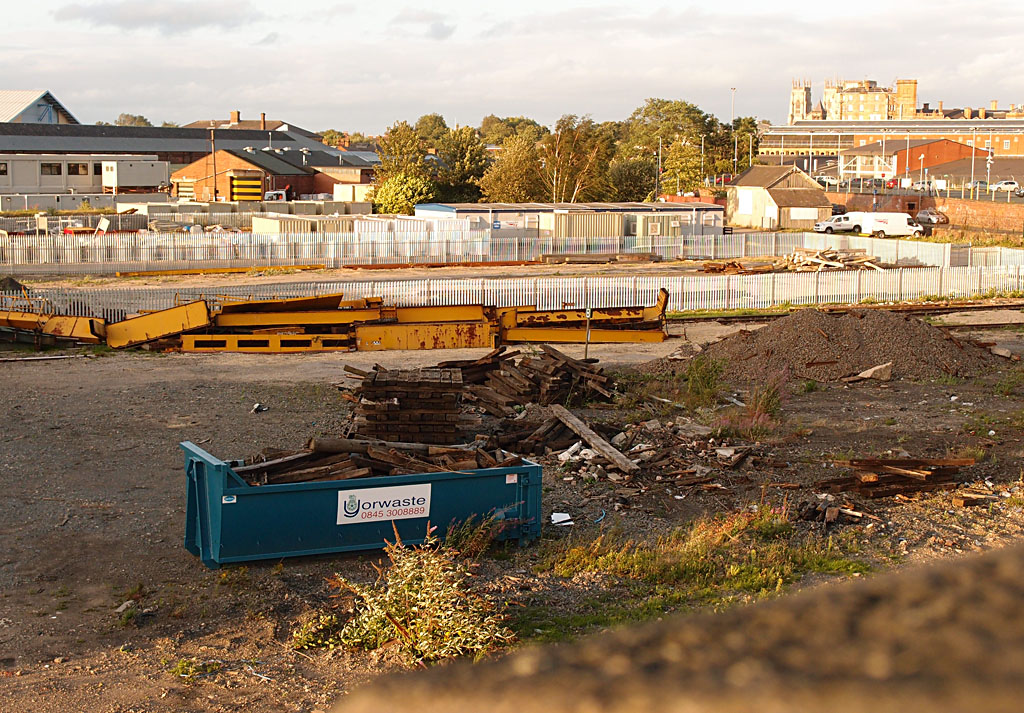 From the steps to the footbridge, peering over the wall, it looks generally more dug-up than it did back then.

The most striking change needs a ‘then and now’ comparison. From the Cinder Lane steps, in 2004: 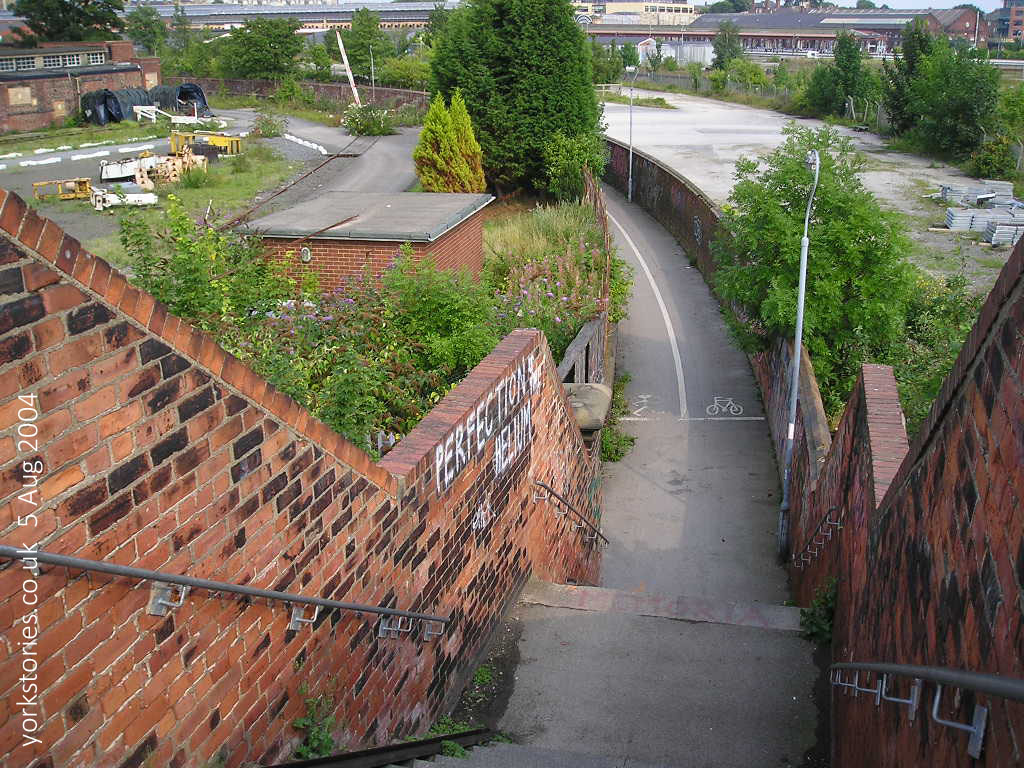 I liked the smooth curve of the old brick walls, the way the lane seemed to confidently carve its way through the landscape, its curve like the sweep of the railway lines around it. 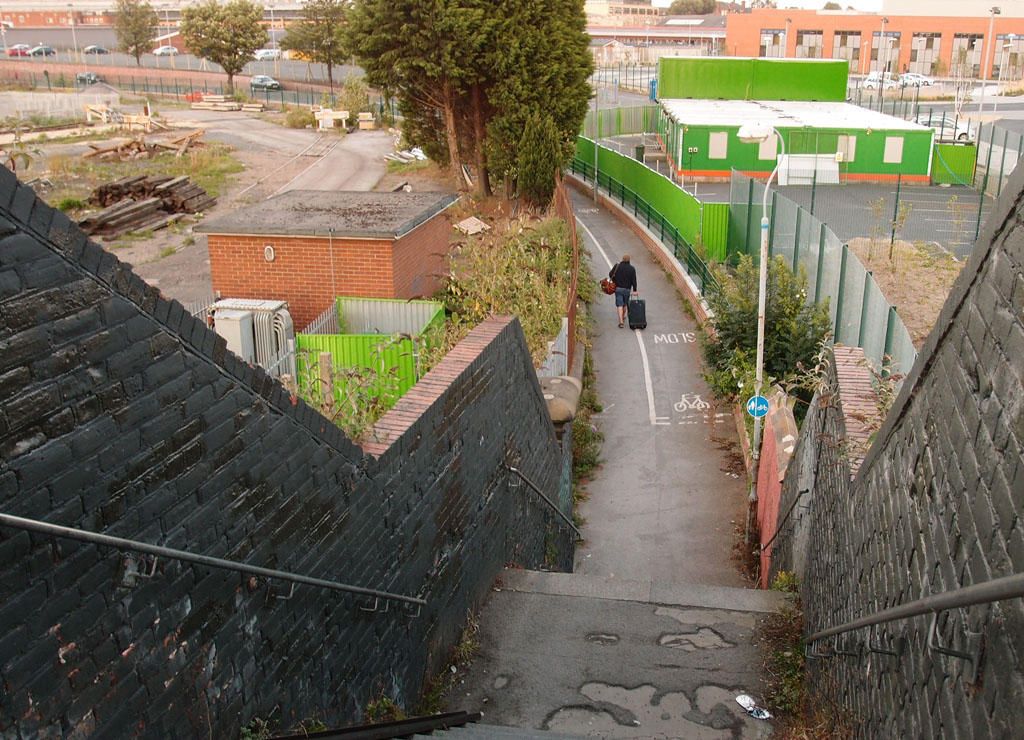 Nothing aesthetically pleasing at all. Most of the red brick has gone, and the parts that are left have been painted a gloomy black. Is this meant to discourage graffiti, perhaps? It looks much worse than it did before.

The other reason I came down here was to look at a large new building. I took a few photos of it from further down the lane, but once I got to the steps I was concentrating on trying to line up the photo above to match the 2004 one, and also trying to get photos of the area to the Leeman Road side before the light faded completely. When I looked the other way, from this higher vantage point of the steps to the bridge, it was such a contrast. This is what’s on the station side of Cinder Lane: 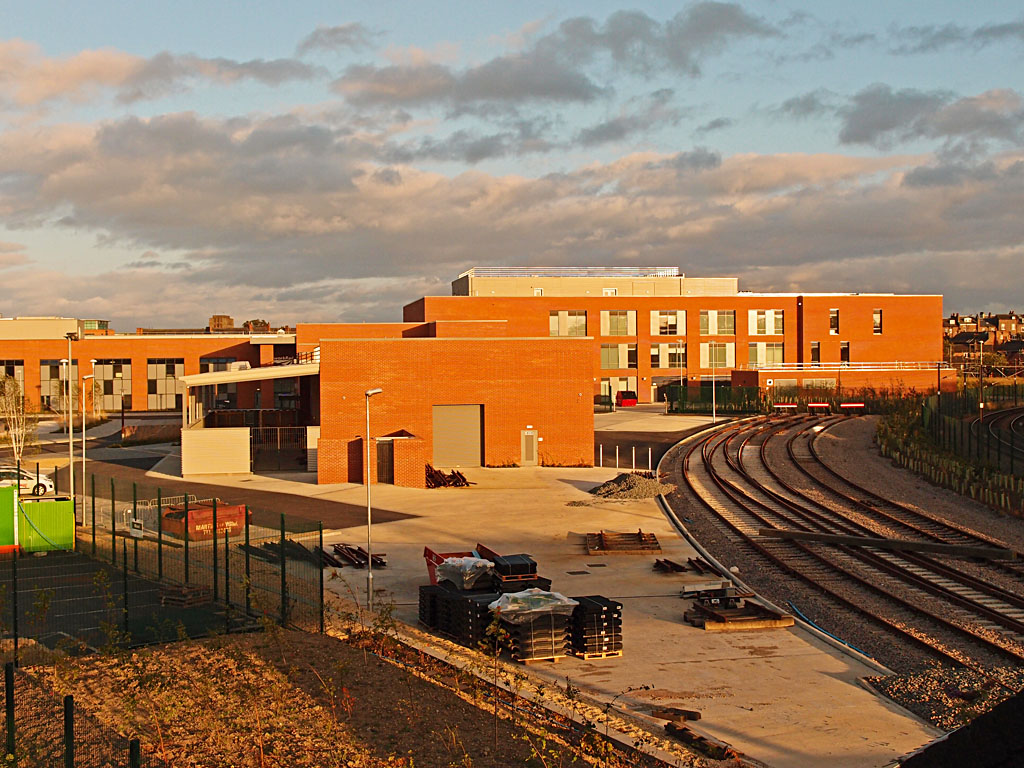 I was there at just the right moment, as the evening sun appeared and lit the place and the lines leading up to it. Wow, I said, aloud, to myself. 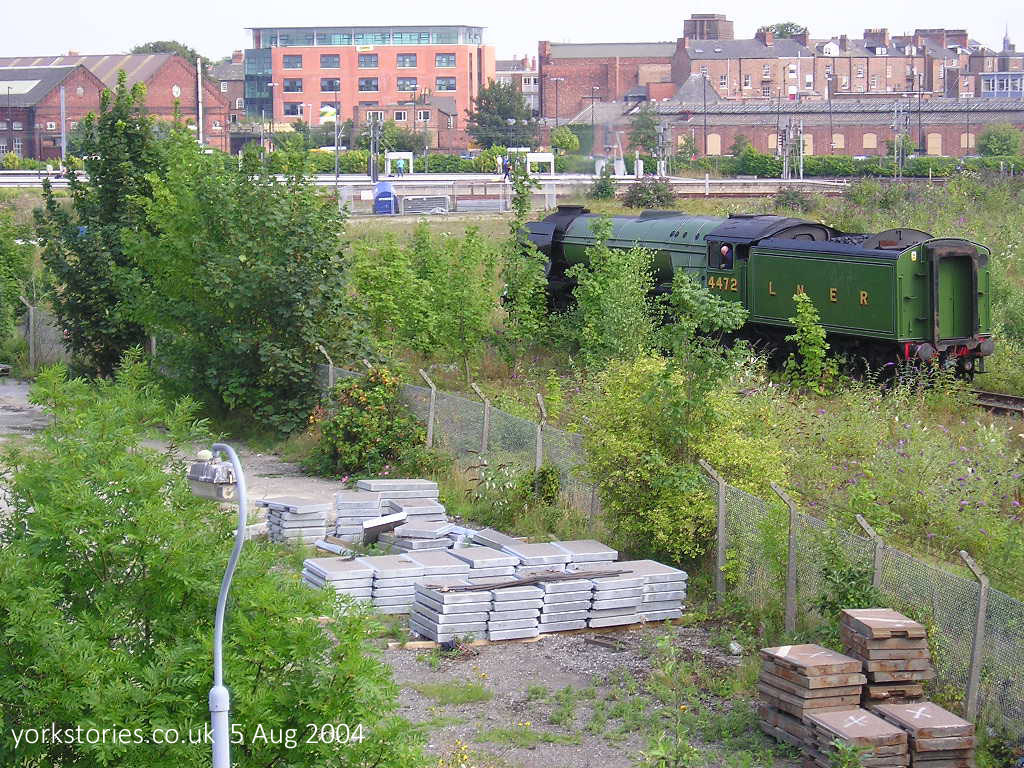 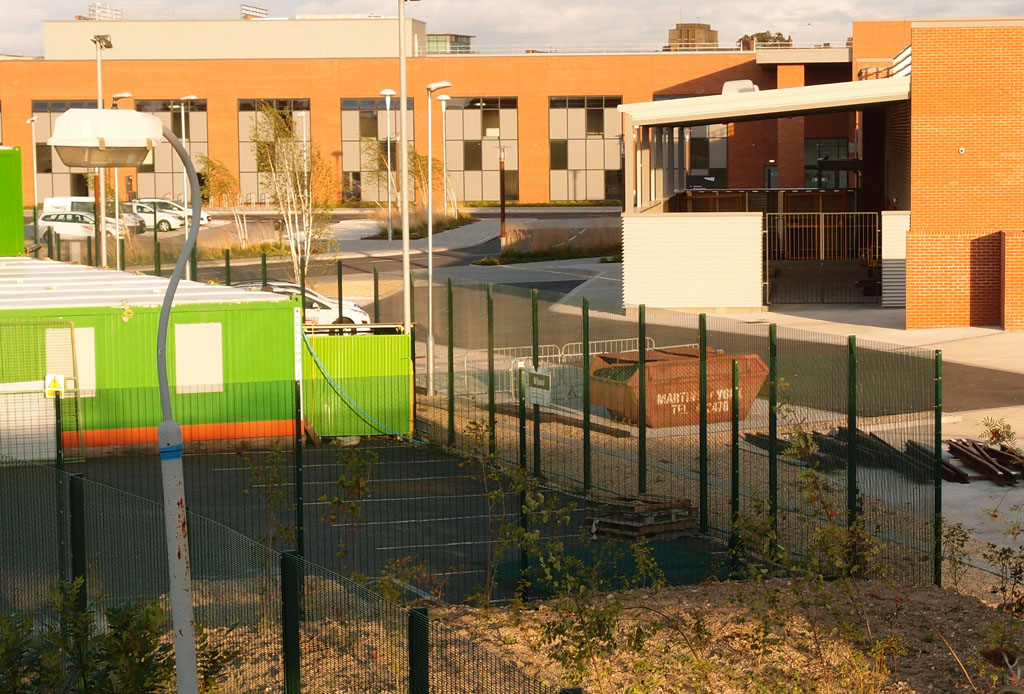 Only recognisable because of the buildings in the background, the tops of them just visible now over this new addition to the landscape: York Engineers’ Triangle, rail operating and training centre. Regular readers might remember that before the redevelopment of the site the old roundhouse foundations here were open to the public and I went along to look at them, and some rusty old shovels.

While I was gazing on the shiny new thing on the roundhouse site, on the other side of the footbridge the sun was setting over older buildings and waiting freight.

To the left of the (enlargeable) photo, Acomb’s water tower, the new buildings of Holgate Park and what’s left of the carriageworks. Of which there’s a lot more to say, on later pages currently under construction. (Update: constructed since, on this link and here and all things tagged ‘carriageworks’.)

But for now we’re crossing the footbridge and turning left down Railway Terrace, for the next page.

This page on the Network Rail virtual archive may also be of interest: York South Depot.

This page was sponsored by a reader, thank you.

Lisa @YorkStories is the creator, administrator, and writer of content on www.yorkstories.co.uk. She can be contacted on this link or via Twitter, @YorkStories
View all posts by Lisa @YorkStories →
Tagged  2004-2014, YorkCentral
To link to this page's proper location please use the > permalink