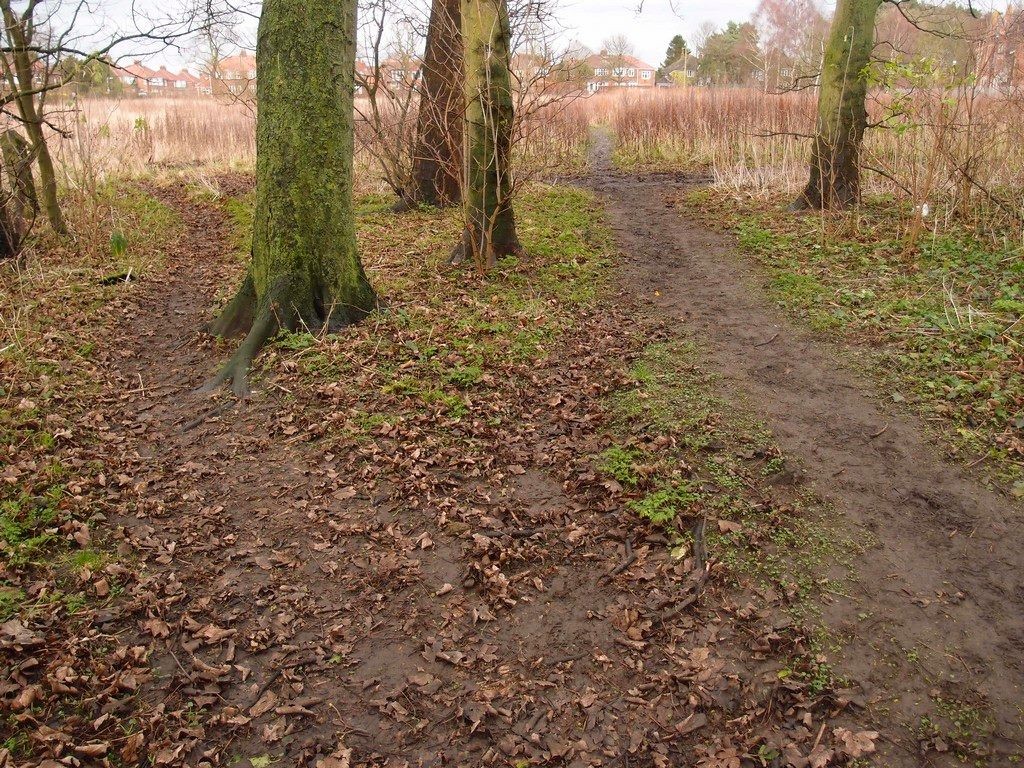 A recent Press report on the closure of Bootham Park hospital referred to two possible sites for a new purpose-built facility. One of them is apparently ‘an empty parcel of land adjoining Clifton Park Hospital’.

I thought I’d go up there for a walk to see the lie of the land, and how ’empty’ it is. Please join me on a short wander around a muddy field. It’s more interesting than it sounds, honest. 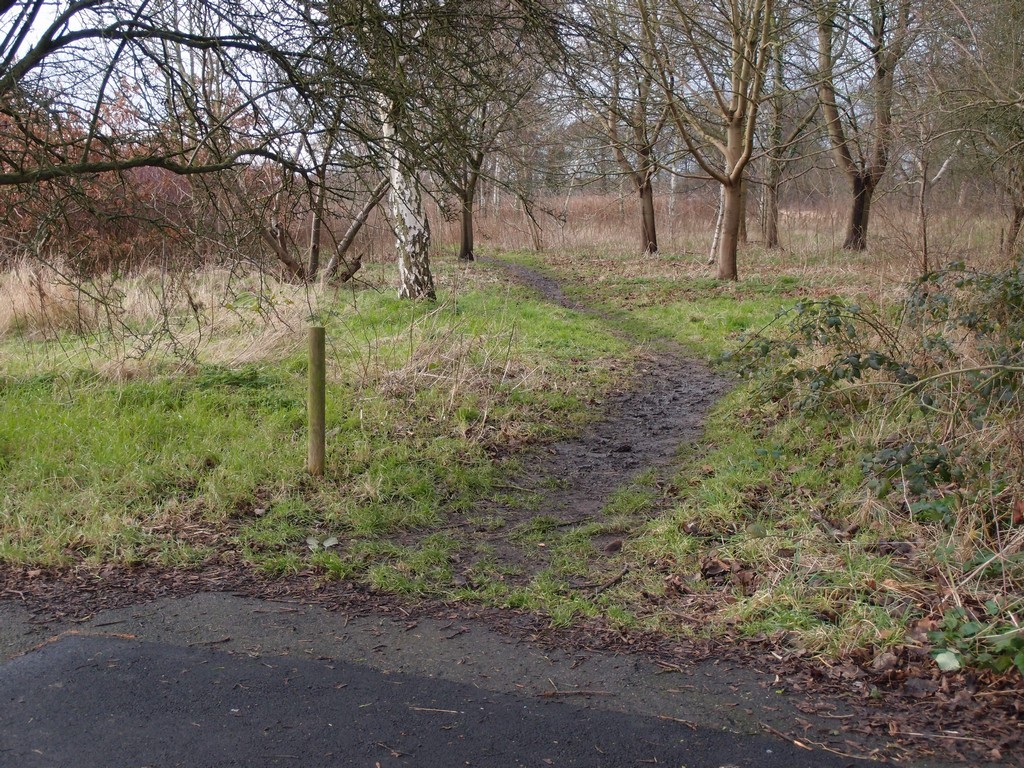 From Fylingdale Avenue’s pavement, onto the muddy track

Some way out of town, in the Rawcliffe area, there’s a road off Shipton Road called Fylingdale Avenue. It leads on to Bluebeck Drive and what used to be part of the Clifton Hospital site. Now generally known as ‘Clifton Park’.

There used to be a laundry here. It was demolished in 2004 (as covered on one of my very old pages). We’re walking to one side of its site, which has since had a new hospital built on it, called Clifton Park Hospital. It’s not a mental health facility, it does knee and hip replacements and that kind of treatment. (More info here.)

Clifton (psychiatric) Hospital used to occupy a large site here. Housing and offices have been built on much of the site, but a few smaller peripheral buildings remain from the original hospital. Over in the distance, on the left of this photo below, is one of them. A wheelchair centre in more recent times, apparently. 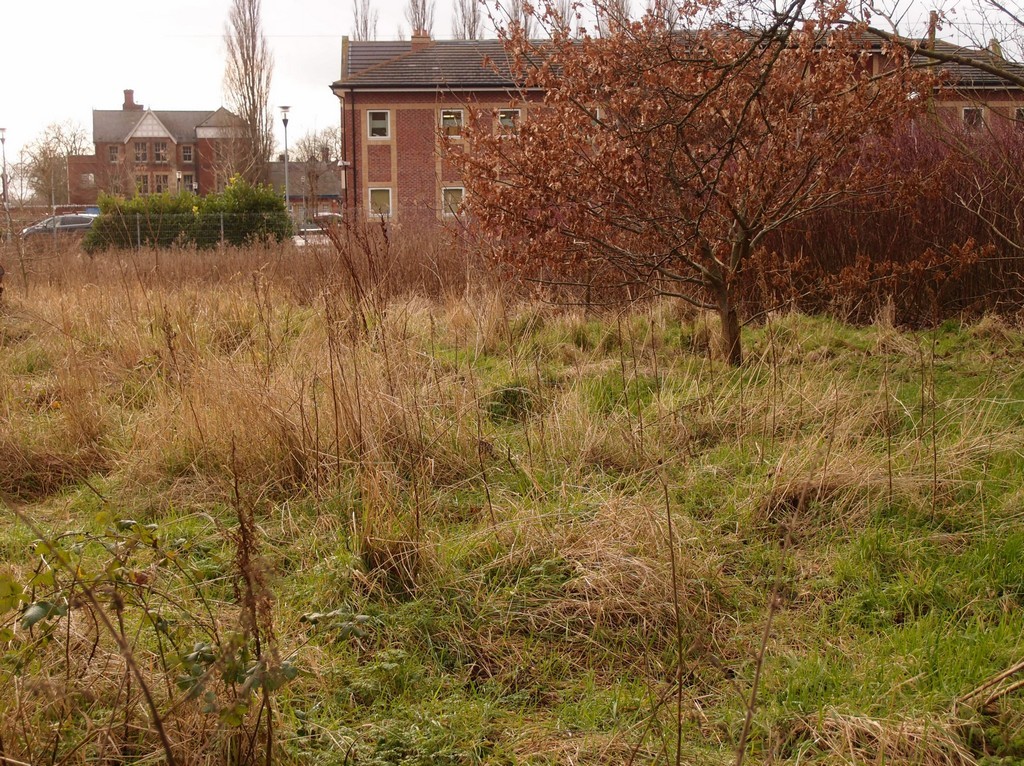 After a short section of muddy track and trees alongside the new Clifton Park Hospital we reach the boundary of the built-up part of the old hospital site.

In this photo those trees in the distance mark a narrow pathway through to Rawcliffe Meadow. We’ll be over there shortly, but for now we’re carrying on down a path straight on, following the same line as Shipton Road, around the boundary of this open area. 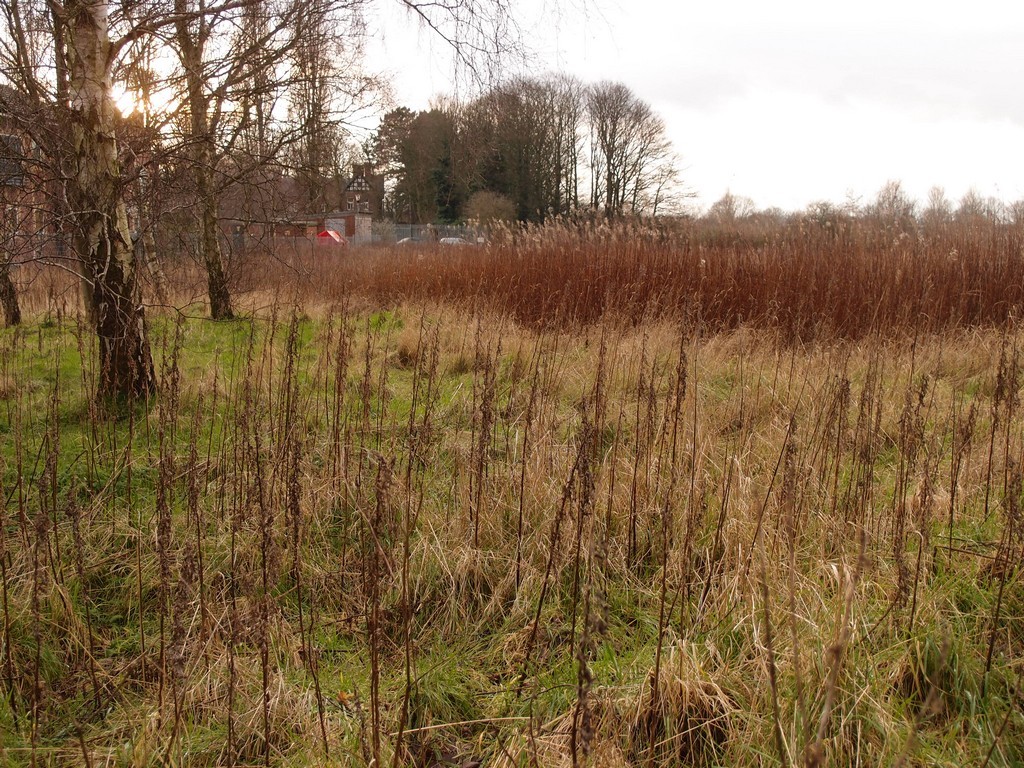 It’s a large open space covered with weedy rough grass and other vegetation. I’ve walked across a corner of it many times, but have had no reason to go to the other end. Until now, when trying to envisage how a new mental health facility might fit into the landscape.

We get to the other side of it, and look back the way we’ve been, and I realise that the reason I’ve not walked across it before from the other side is because of this sign on the gate at the other end, alongside Shipton Road, saying that it’s private property and that we should keep out. 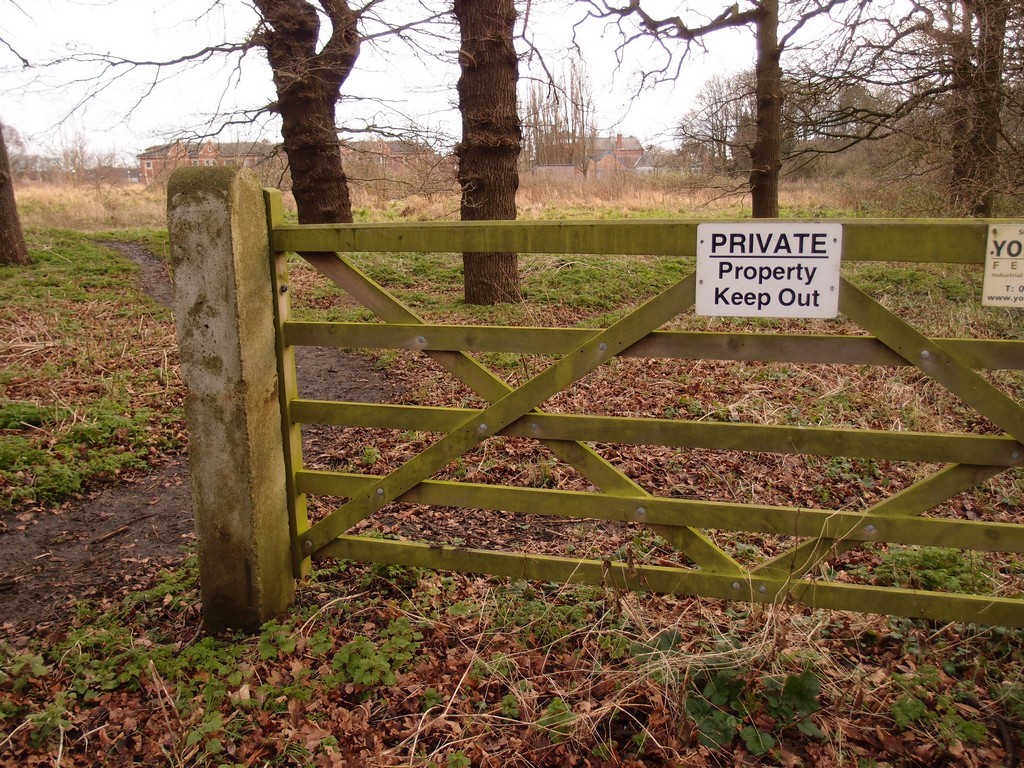 Clearly this sign has been completely ignored, as a well-worn track leads from here across the grass.

In the far distance the Clifton Park Hospital building is visible, the one we walked past a few minutes ago. 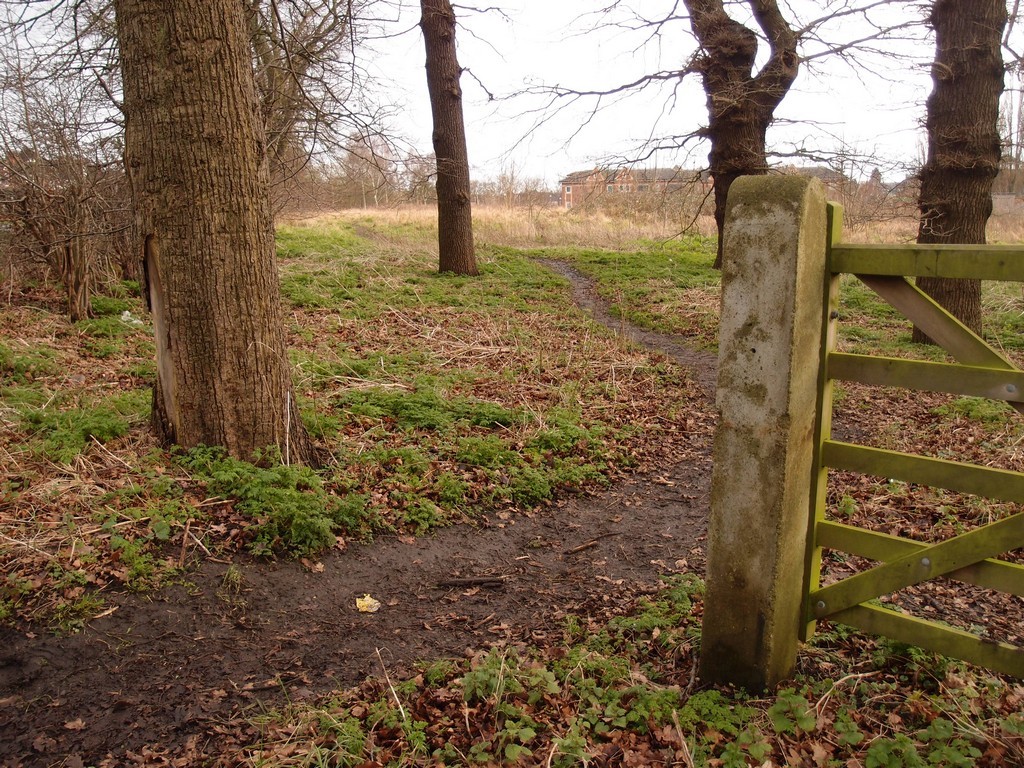 Ignoring the signs, as everyone else does, let’s go back across this NHS-owned land via one of the well-worn paths veering round its other boundary. 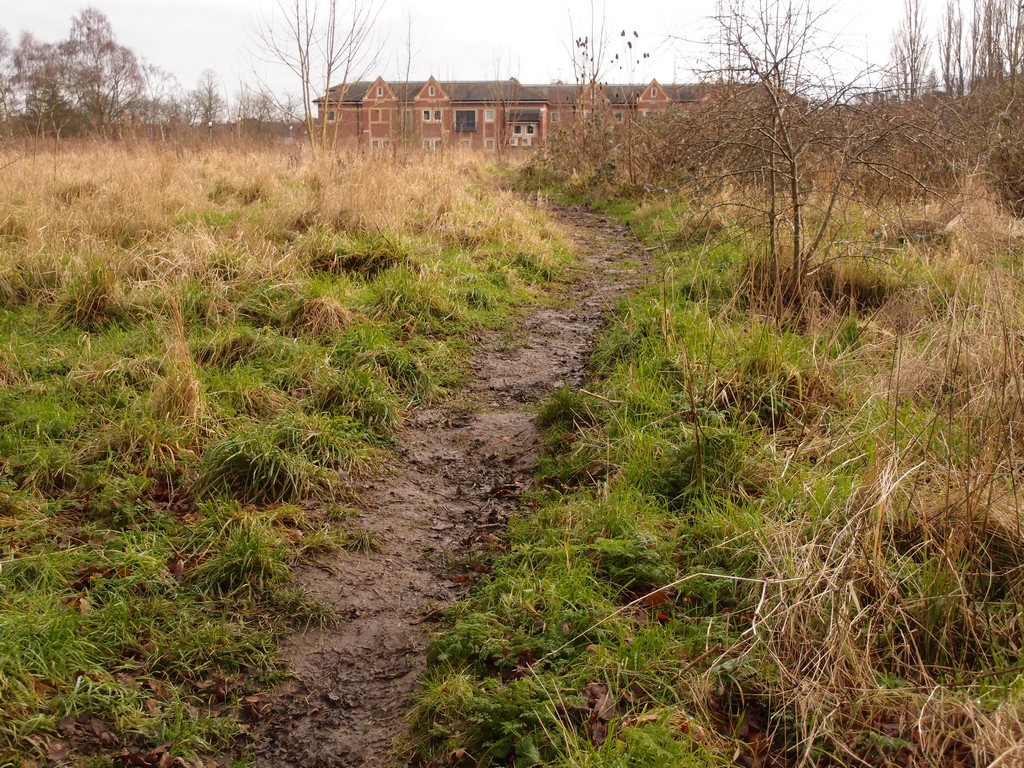 Alongside this side of the site, with allotments on the other side of it, is a beck. This must be Blue Beck. The mud up its steep banks showed that in the recent floods it was much higher than this. 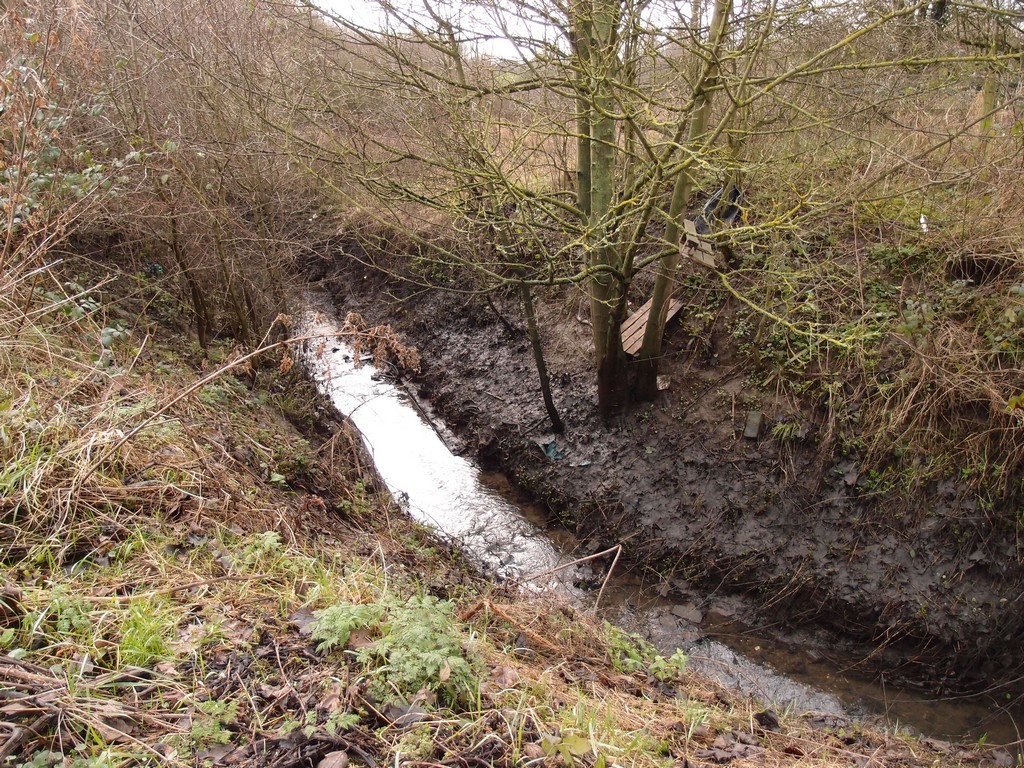 When we reach the other side there are the remnants of a boundary fence and a couple of gateposts. 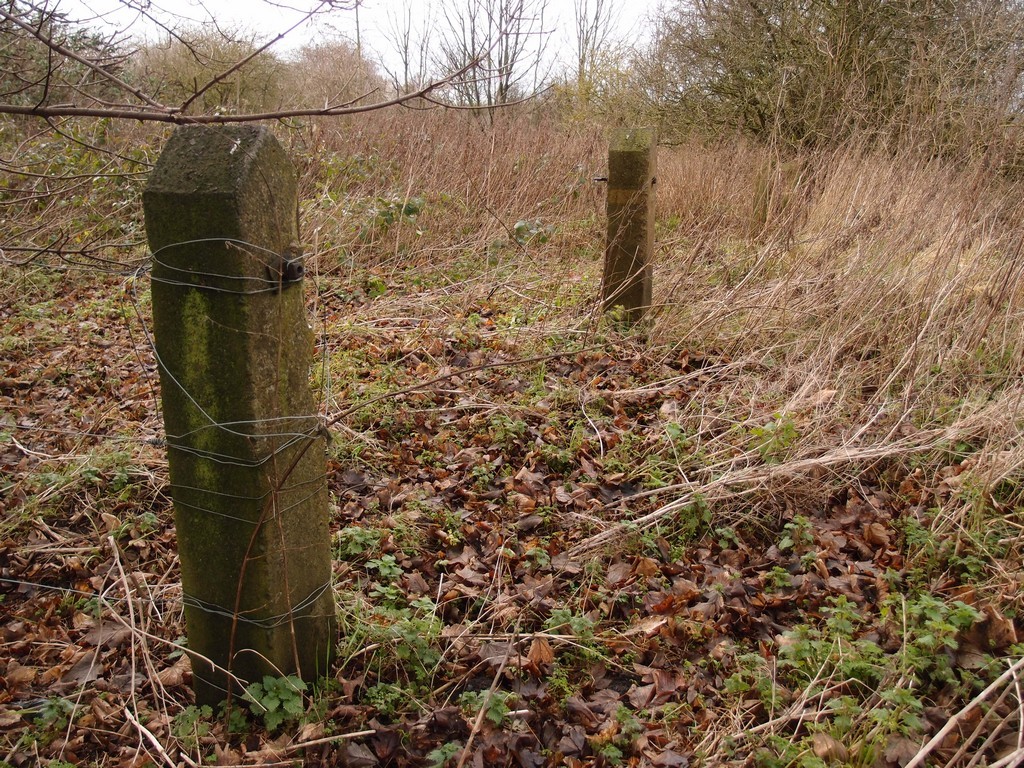 I’ve walked through this bit before, and often been struck by how what appears to be open/common land in this area has several remnants of fencing across it. A reminder of old boundaries, and ownership. And perhaps a reminder not to take open spaces for granted. We may not always have a right to roam on them. 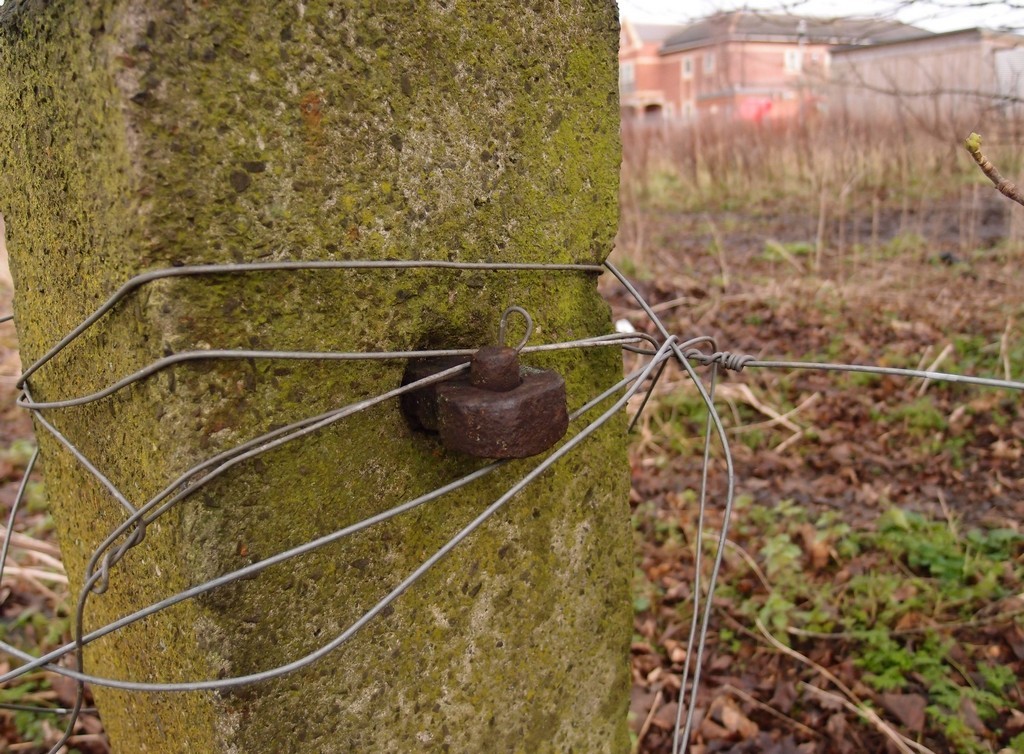 Having been deterred from further exploration by various bits of fencing and mounds of brambles and buddleia, we’re now at that avenue of trees mentioned earlier, where the well-worn path leads us.

Though there are several paths well-worn here, They even have a junction, a crossroads, at the end of this avenue of trees, as we look back towards Shipton Road. One of several ‘desire line’ paths leads straight on from here towards the Shipton Road side of the site, across the potential building site for a new replacement mental health facility. 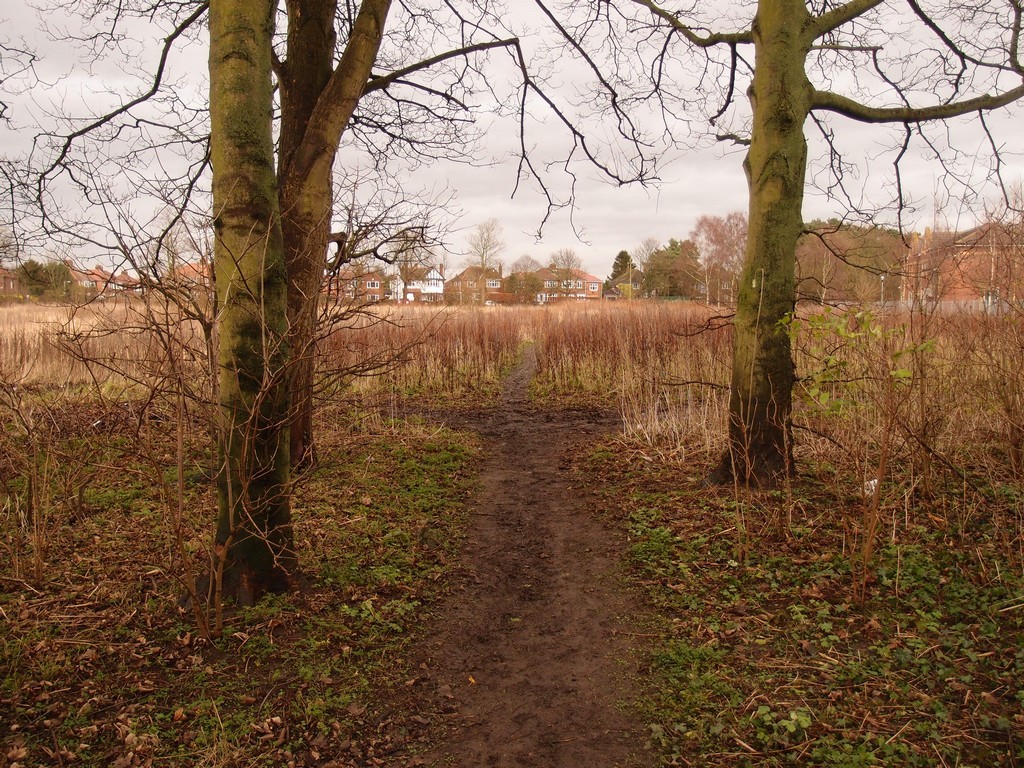 Here we’re in the middle of the avenue of trees, again looking back towards Shipton Road. Off camera to the right are mental health services buildings, one a remnant of the old Clifton Hospital, another a recently built unit, behind metal fencing. 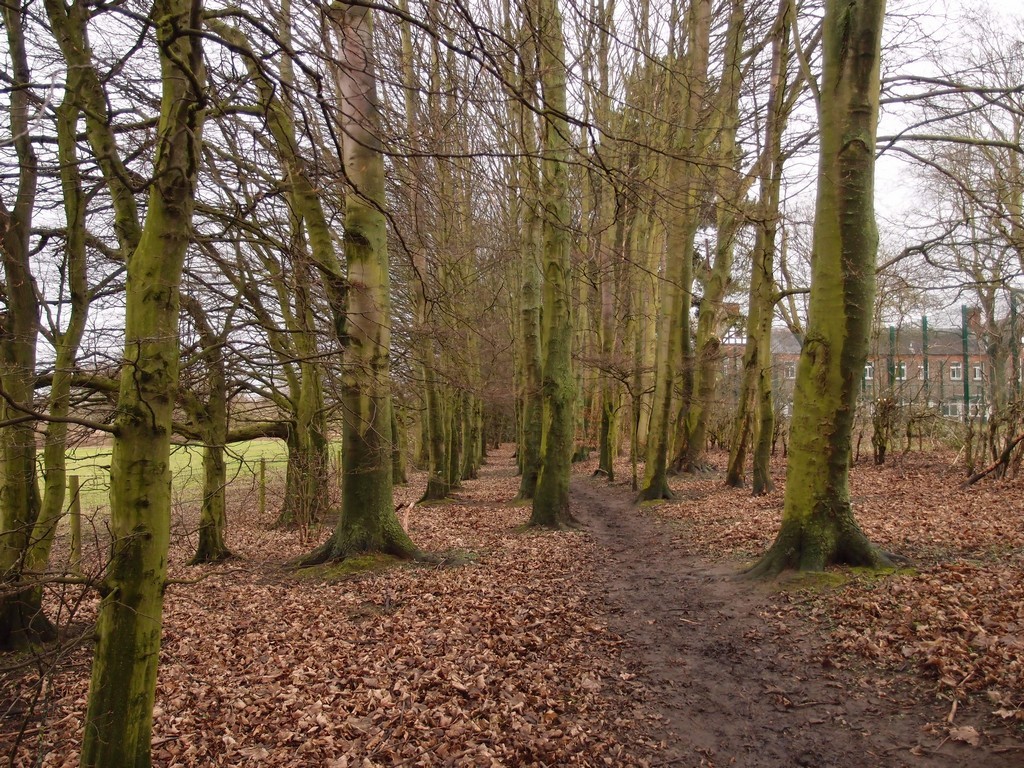 At the end of this tree-lined track, another fence, but this time with a stile leading to a very muddy Rawcliffe Meadows. 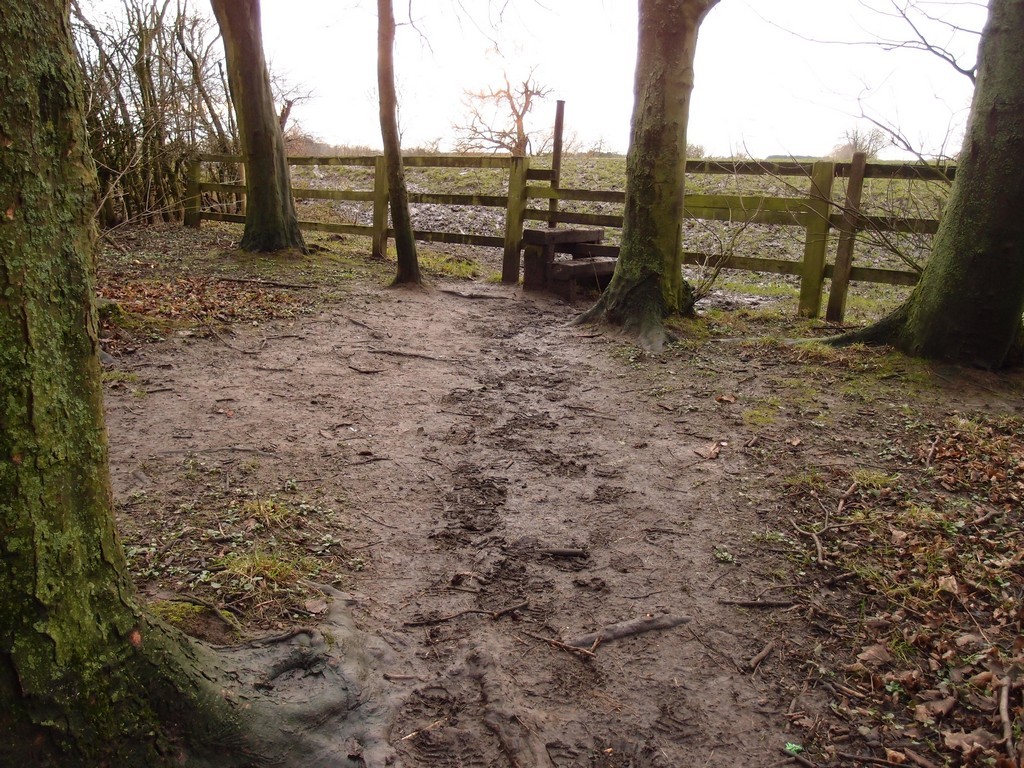 So, that’s our short wander in the area around what could be the site of a new mental health facility to replace Bootham Park, according to recent reports.

It’s certainly quite a large area of land. The NHS appparently also own the land to the other side of the beck, which has allotments on it. I wonder how large the new facility would have to be, and if it would also need to utilise the land the allotments are on. I wonder if the allotment holders are wondering that too.

I’m also wondering how many of these pathways in this area are legally protected official rights of way. This land many of us have been wandering across freely may end up not accessible to us. Does that matter?

Then there’s the local residents, who would lose their open space. Residents of Fylingdale Avenue and other streets built on the old Clifton Hospital site protested about the new mental health unit built recently on land just behind that avenue of trees, so perhaps they’d protest again.

But most important of all, far more important than locals losing green space or a nice view of trees, is of course the people who would be using the new facility, if it did replace Bootham Park Hospital.

The site isn’t close to the city centre, as Bootham Park Hospital is.

It is though close to the site of the old Clifton Hospital, which, as comments on Twitter highlighted, may raise trauma issues from the past. A reference to the Kerr/Haslam inquiry. More information here and on the BMJ site here. The site is a stone’s throw away from streets apparently named after various superintendents of Clifton Hospital in ages past, including a ‘Kerrside’, presumably built and named before the Kerr/Haslam inquiry.

So it looks like an ’empty’ site next to the remnants of the old Clifton Hospital. But perhaps it’s not as empty as it seems.

Here’s the site with the route walked above marked on it. You can zoom out to see how far from the city centre it is.

Lisa @YorkStories is the creator, administrator, and writer of content on www.yorkstories.co.uk. She can be contacted on this link or via Twitter, @YorkStories
View all posts by Lisa @YorkStories →
Tagged  Bootham Park, Rawcliffe
To link to this page's proper location please use the > permalink