Along the walls, to the Rigg monument and the Tuke house 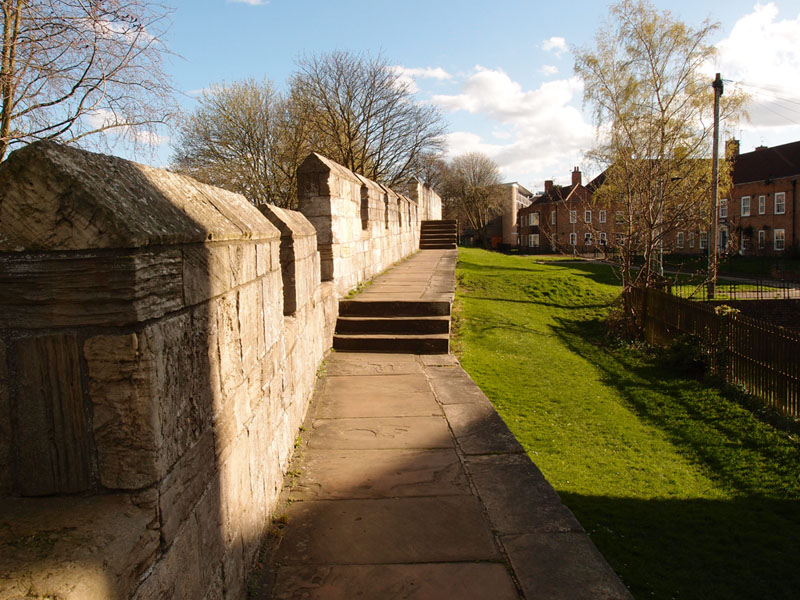 A couple of weeks ago, on a sunny spring afternoon, I had a walk over to Lawrence Street, as there were two specific things of interest I wanted to have a look at. From the Navigation Road area I thought I’d go via this section of the walls, looking so handsome in the spring sunlight. 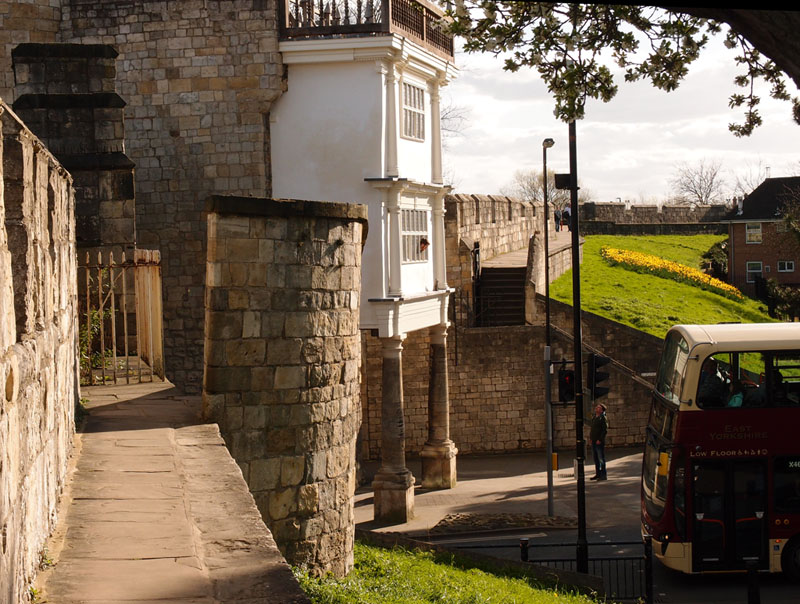 The bar has undergone restoration and improvement works in recent years, but we haven’t time to explore that further just now, as we’re dashing over the road to Lawrence Street.

Actually, it’s impossible to dash over the road here. I seemed to wait an age to cross, by Walmgate Bar, at that junction always so busy with traffic.

Not too far along Lawrence Street, the first place I’d been aiming for: the former St Lawrence WMC (in recent memory), or ‘the Tuke house‘ as I tend to call it now. 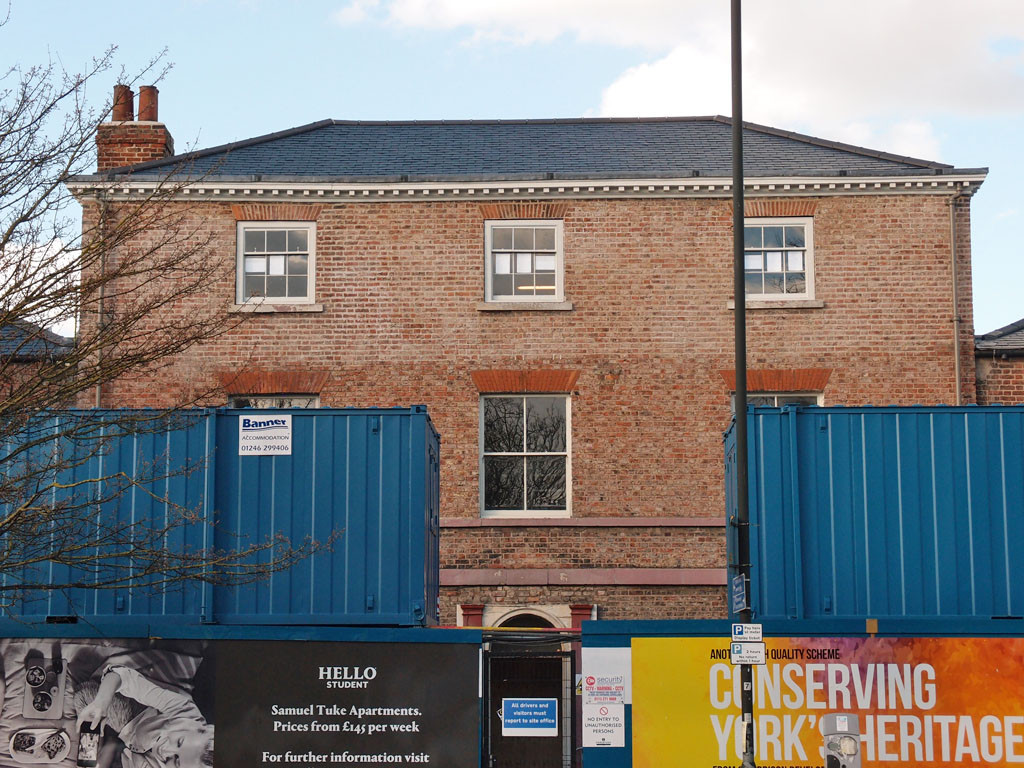 I’ve popped by a few times over the last year or so, to see how work was progressing, but this was the first time the frontage showed clear signs of repair and restoration. Quite a dramatic difference, those clean lines of the new roof and the windows. No buddleia growing out of the top floor windows. And, as you may have noticed in the photo above, its connection to the Tuke family is recognised in the naming of this new student accommodation: the Samuel Tuke apartments.

Quite a change then, from buddleia bushes back and front and its rather sad and saggy look before: 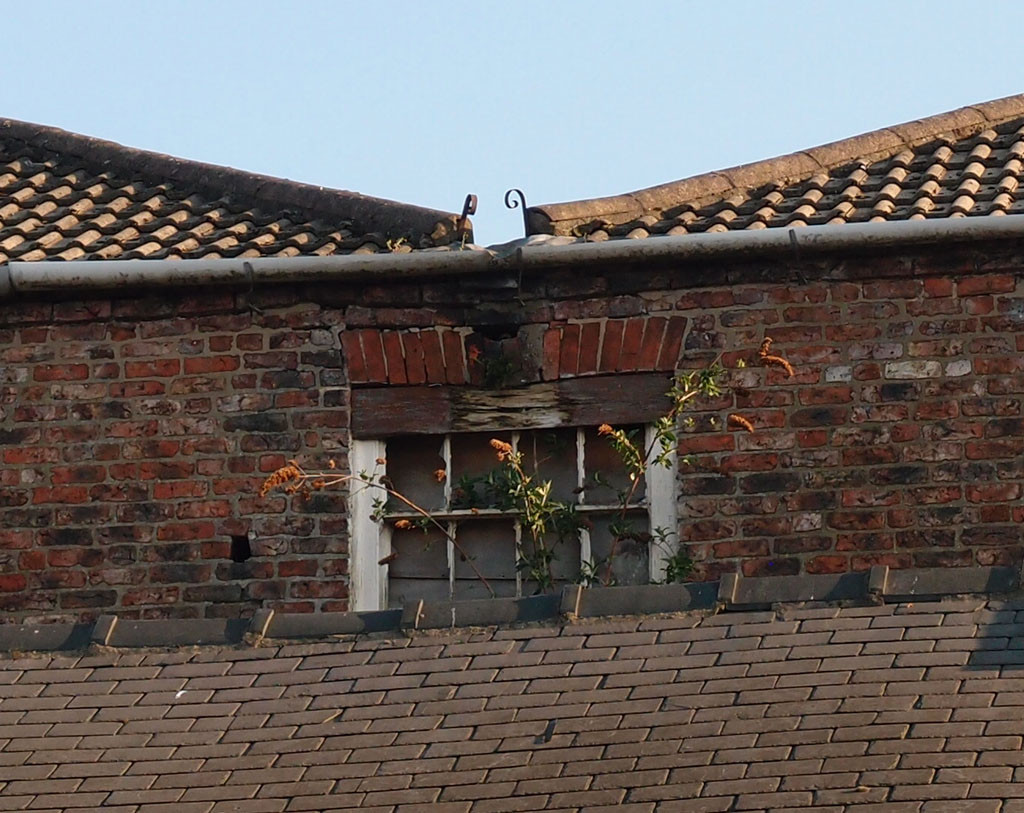 There’s a new block under construction at the back of it: 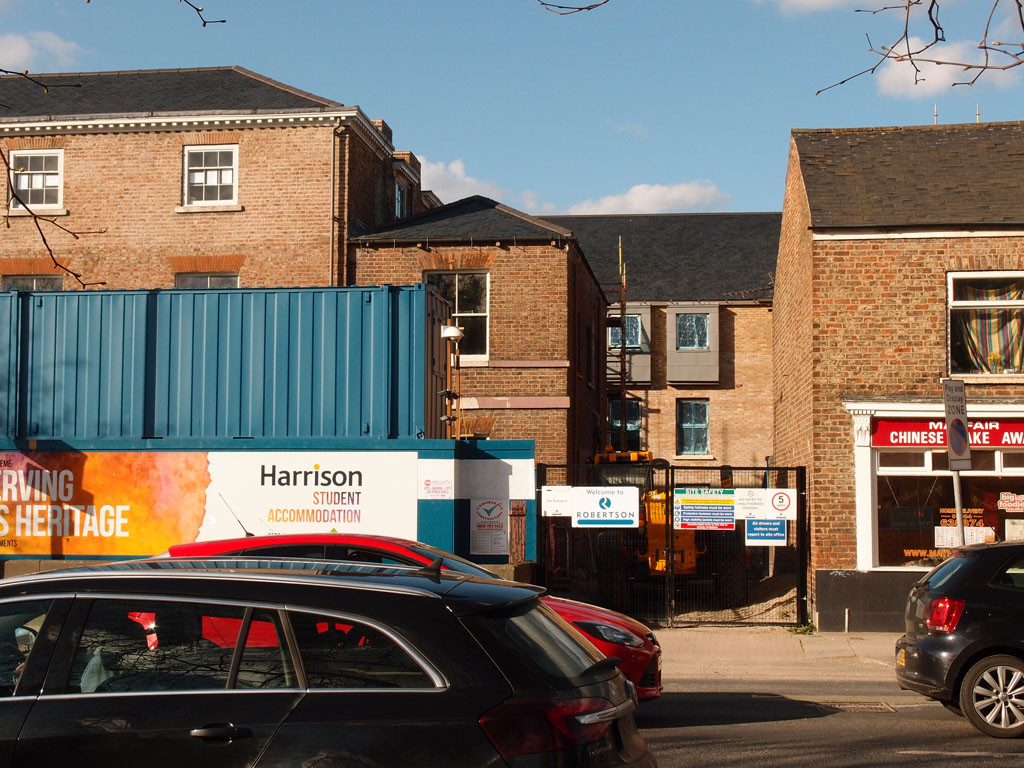 The new block isn’t visible from Lawrence Street in any dramatic way and doesn’t seem to spoil the look of the original historic house. But from the back of the site and the side its size becomes more obvious: 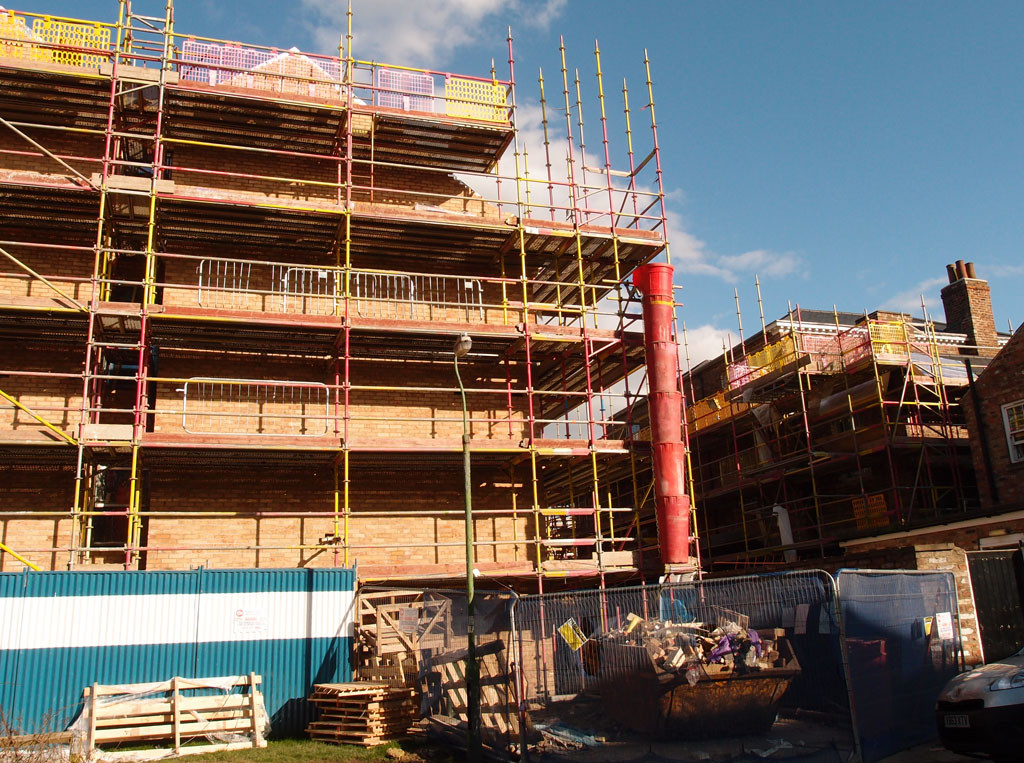 The original house is under the scaffolding to the right, the new block on the left.

From the Tuke house, let’s cross over the road to the churchyard of St Lawrence’s, opposite. Changes here too, more restoration, but on a smaller scale. 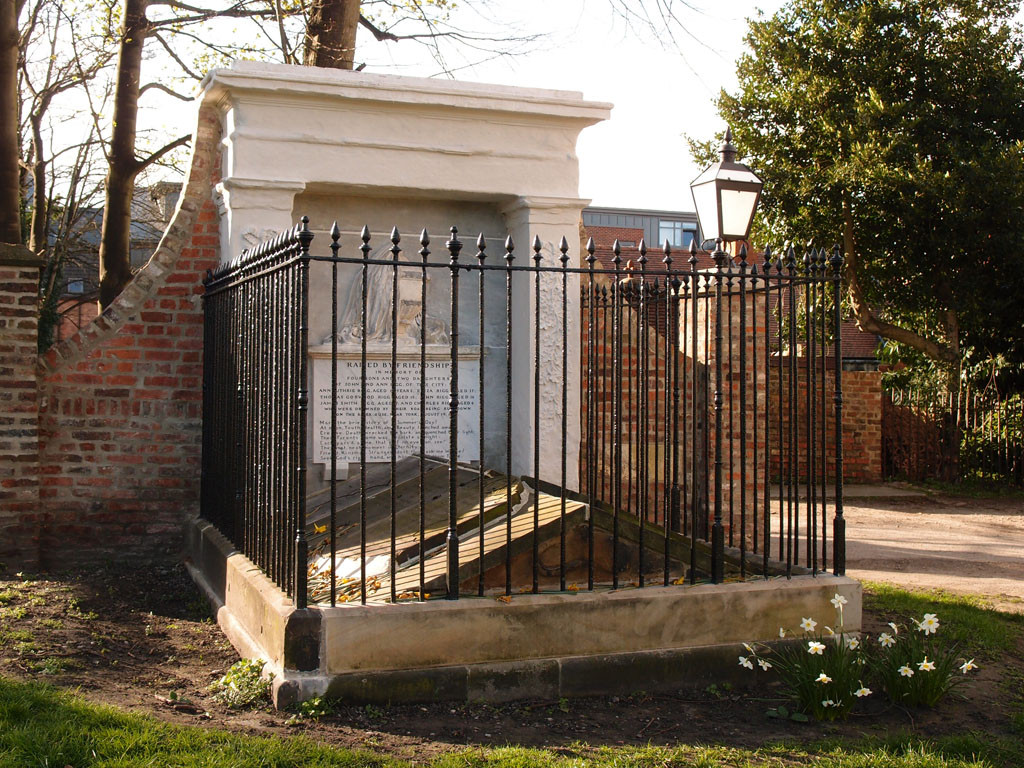 I’ve written about it before, a couple of times, on the first occasion because it seemed forgotten, and then when it was clear that it wasn’t forgotten, and that there was a crowdfunding campaign to raise funds to restore it, led by York Civic Trust.

A reminder of how it looked before: 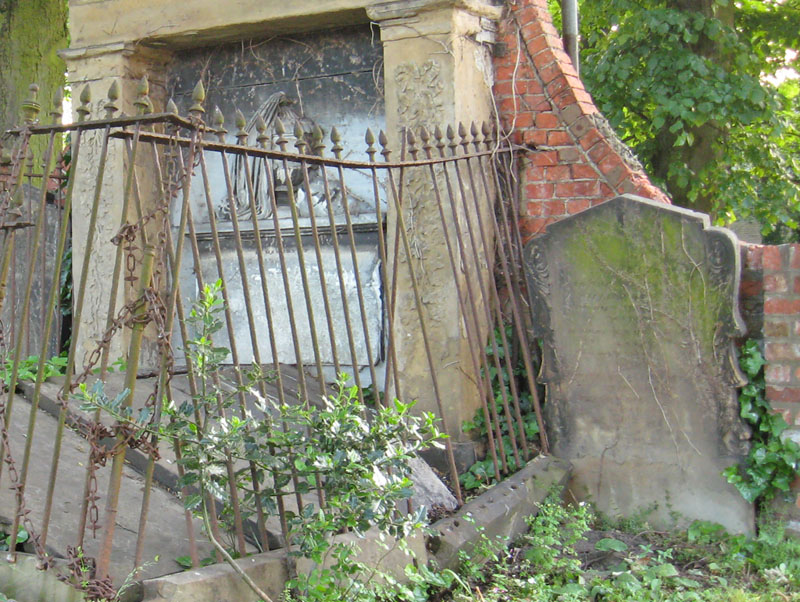 And from a similar angle, how it looks now: 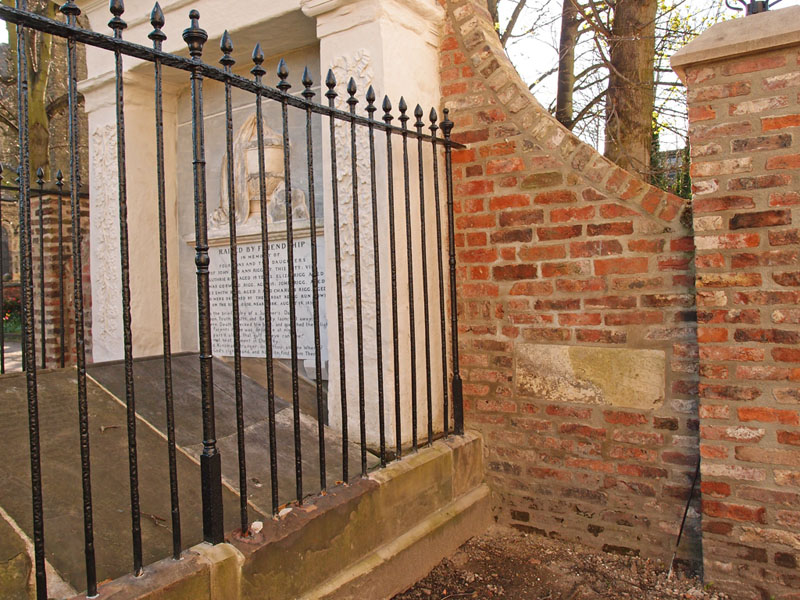 The inscription has been carefully recreated: 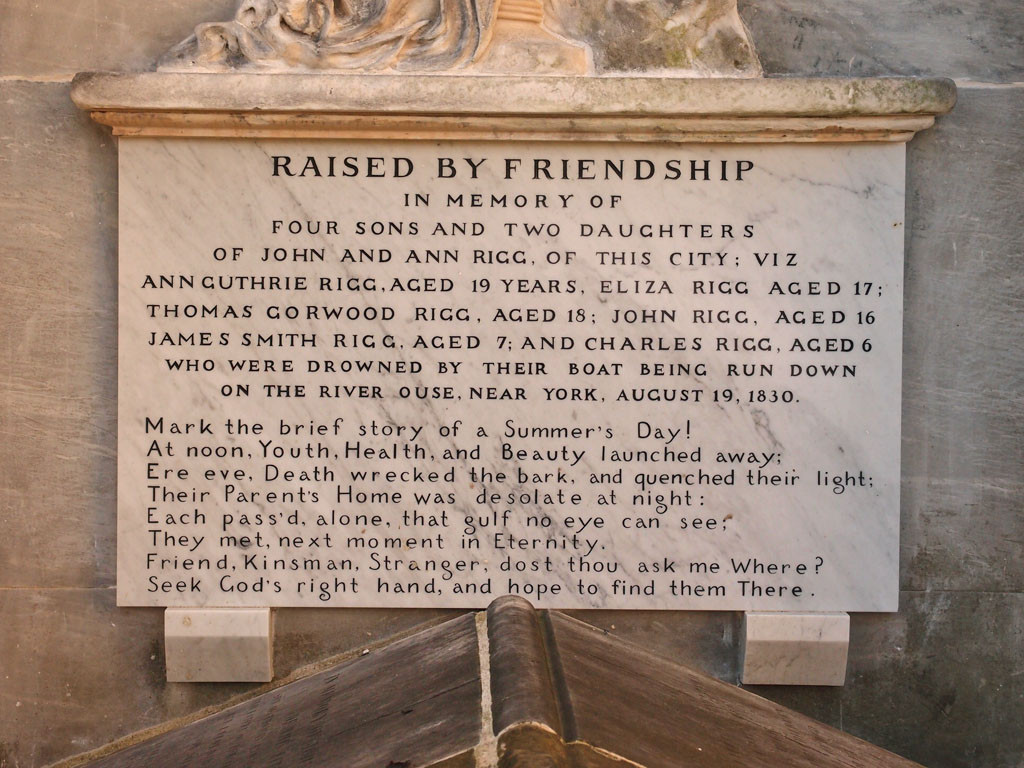 Particularly touching were the daffodils, faded by the time I visited but presumably from the recent ceremony of re-dedication. 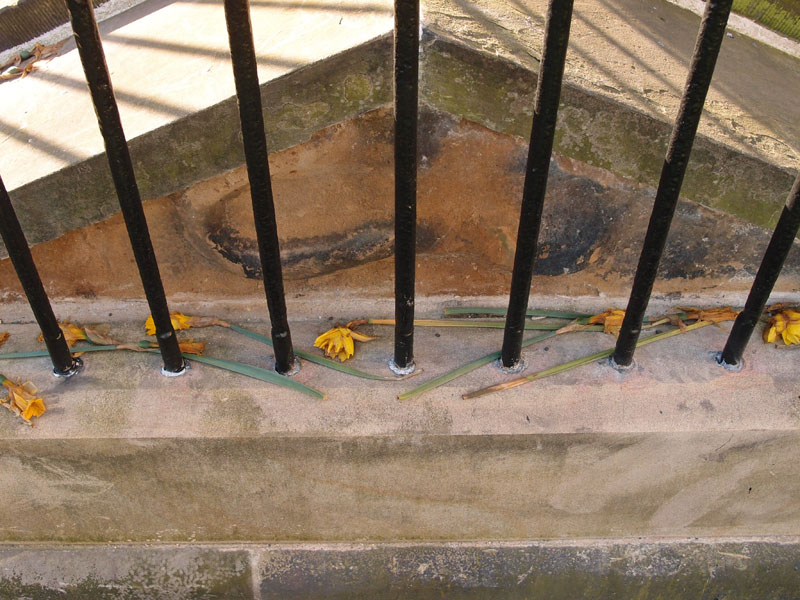 Sometimes, when I take photos for these pages, and particularly in the colder months of the year, I dash over to the particular location focused on just getting the necessary pictures. On this occasion, such a beautiful spring day, I sat awhile in the churchyard at St Lawrence’s, on a bench near the Rigg memorial and close to the tower of the old church, and ate a sandwich, and enjoyed the sunshine, and had a think.

A couple of men walked by and we all smiled at one another as people often do on sunny days, particularly perhaps on Fridays at the end of the working week. They both went to get their cars from the car park and I carried on sitting in the sun, thinking about the restoration that had been completed on the monument behind me, and the restoration taking place on the old house opposite, and how both had been sitting there for so long crumbling away, and how much around them had changed, is changing.

In the middle of it all, the charming tower of the old St Lawrence’s, a pale stone background to the newly-painted Rigg monument railings. 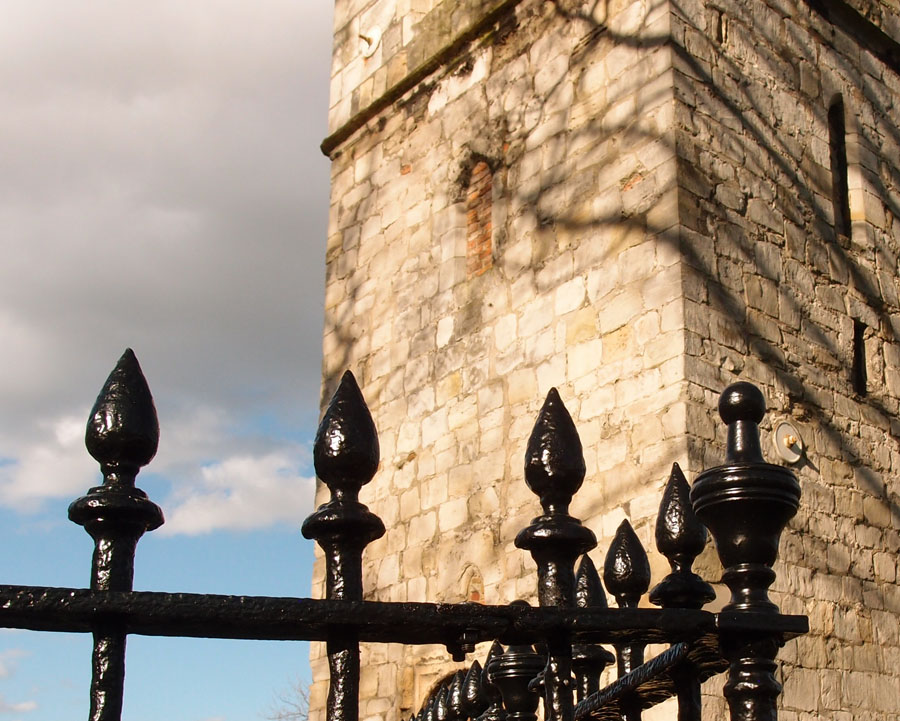 Which reminds me, I need to get on with the new printed pamphlet version of When the Suburbs Burned. Enough of this sitting about lazily in the sunshine, thinking.

If you’ve enjoyed this page and would like to express appreciation for this ad-free, carefully compiled community-minded resource of mine, here’s a new way to do that: