One building … and what we call it 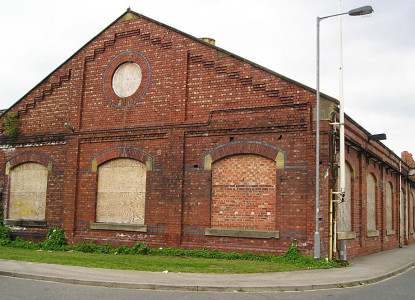 Back in June, in a short survey, I asked if readers recognised this building. It’s pictured here as it looked 10 years ago, July 2004.

It was really nice to see your answers coming in. It had looked as if the place had been forgotten. But you, dear readers, you haven’t forgotten it.

27 people answered the survey, and 17 of you knew what the building used to be. Thanks to everyone who answered, everyone who remembered.

Your answers highlight a small dilemma I’ve had in the naming of this place. Carriage Works or carriageworks? Two words or one? I’ve always gone for ‘carriageworks’, naturally and without thinking about it, but the spellchecker doesn’t like it and underlines it in red. Many official documents call it ‘Carriage Works’. But the local press, and many of you, also write it as ‘carriageworks’.

Like many places it doesn’t have just one name. People who worked on this site might refer to it differently — you might have noticed in the above answers two references to BREL. The carriageworks was BREL (British Rail Engineering Ltd) for a couple of decades, late 1960s to late 1980s. I remember the makers plates on the carriages of trains I travelled on then, and feeling proud when I noticed that BREL YORK lettering.

Later the carriageworks/BREL became ABB. No one who answered my survey question called it that. It was ABB when it closed in the mid-1990s.

I’ve included a reminder of that in the form of some audio recorded at the time, recently digitised.

Here in the present time, more on what you said about this building, your memories and thoughts.

Lisa @YorkStories is the creator, administrator, and writer of content on www.yorkstories.co.uk. She can be contacted on this link or via Twitter, @YorkStories
View all posts by Lisa @YorkStories →
Tagged  carriageworks, Holgate, YorkCentral
To link to this page's proper location please use the > permalink