Summer 2014: Remember the excitement, those TdF cyclists whizzing through York on bikes, all fit and sleek and kind of shiny and perfect, on top of the range bicycles costing thousands of pounds? How glamorous, how fast and exhilarating it was? And then it was all over. Weeks ago.

… But hang on … there’s someone else appearing, it’s Lisa from York Stories manfully/womanfully labouring along on Old Bikey, bought for £50 from Bike Rescue. She’s a bit late, as the race already finished, but it’s taken her this long to catch up …

… hang on, she’s holding something aloft, triumphantly … it’s an iPad, and on it there’s a picture of what looks like a book cover, and it says ‘Chocolate and Chicory: York and beyond, by bicycle’ … 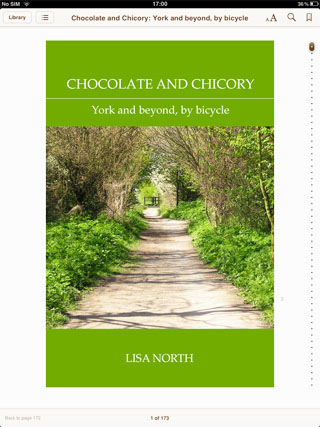 … Yes, at last, something that was supposed to be appearing ‘in July’ … well, it’s almost July, with a little overrun into early August. I’ve been beset by technical difficulties and don’t have a support team of technicians following behind to change my ailing wheels, on this long and bumpy road.

… This isn’t just an ebook, it’s a York Stories artisan ebook … Laboured over for weeks, converted carefully to .epub and Kindle-friendly, involving its author grappling with coding in a caring and personally engaged kind of way, rather than throwing it into one of the ‘meatgrinder’ converters.

You may have read about people publishing ebooks as if by magic in minutes by uploading to Amazon’s Kindle thing and making millions within hours. It isn’t really like that, not for non-fiction books containing maps, photographs, funny 19th century quotes, etc. 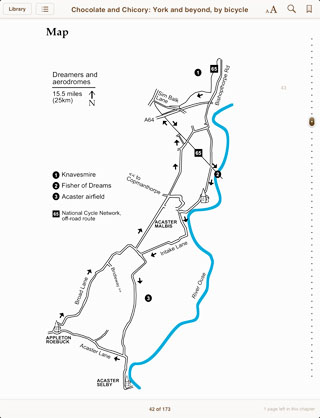 How it looks on the iPad

If you’re not much of a cyclist, perhaps tired of hearing about cycling — and I know many people in York feel that cyclists get far too much attention — I’d like to reassure you that this book’s main focus is the local landscape, local history, understanding the place around us. It’s an extension of the ‘York Walks’ I’ve presented on these pages over the years, but by bike, via muddy bridleways and suburban cycle tracks. More of those hidden histories and lesser-known stories. With poetry, and airfields, and green places, and ducks.

But if you are a cyclist looking for some other destinations apart from the obvious well-publicised places, well, so was I, and these are some of the routes I took, on long sunny days. 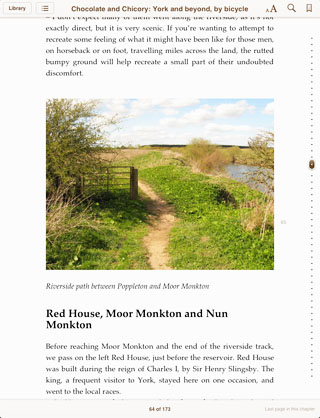 How it looks on the iPad