‘Where you played as a boy': Clarence Street

While researching the Groves Chapel, I found this image, a postcard showing the area of Clarence Street in front of the chapel, from around 1900. 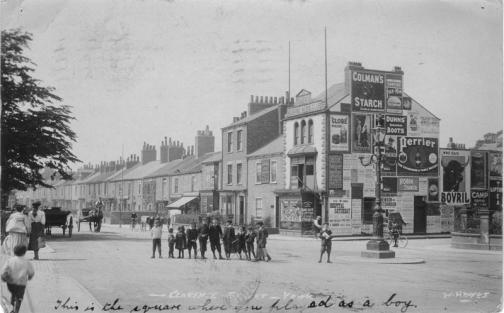 (Uploaded to Panoramio by Idylwilde. Photo by William Hayes)
The postcard image is interesting in itself, but making it particularly special is the handwritten caption: ‘This is the square where you played as a boy’. Maybe sent, a century or so ago, from a parent to a grown-up son.

Most striking, in that one line, is the word ’square’. To us, now, this is a road junction. The idea that it was ever seen as a square seems ludicrous, as does the idea of children playing here.

To replicate the photo above I would have to stand in the middle of the road. Instead I’ve used the Google Street View image, as that seemed the easier and safer option:

Google captured it at a quiet time of day. Often it has standing traffic at the lights in all directions.