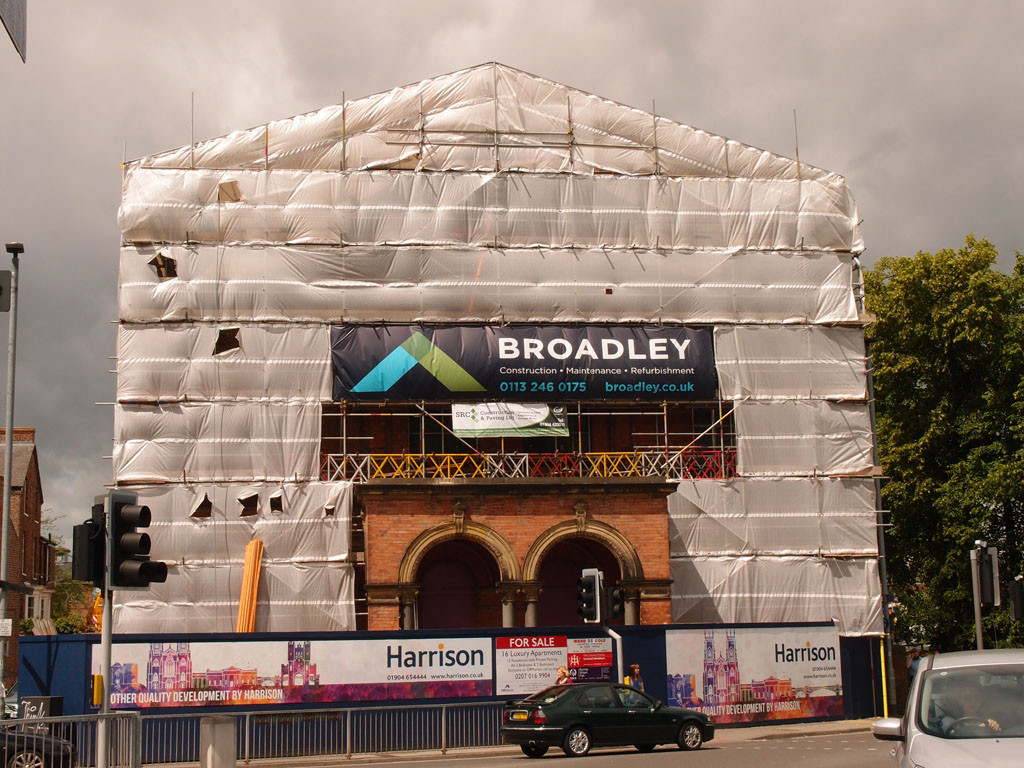 I’ve written a few pages about Groves Chapel (see this link for all of them) before the current redevelopment work started. It seems like time for an update. Above is a ‘hot off the press’ view of the building, taken on 12 June 2017.

Since the planning application for the site was approved, giving permission for conversion to a convenience store and residential accommodation, I’ve been following developments with interest.

As previously mentioned, it’s some time since the chapel was used as a place of worship — it has for many decades been owned and used by the NHS. But it’s still clearly a chapel building in appearance and has been used as such within living memory, and understandably the plans met with some opposition.

It was clearly designed to be an impressive and imposing building facing the Groves area, and Lowther Street in particular. It still is. I was genuinely impressed, earlier this year, while walking down Lowther Street towards it, to see the complicated structure under construction above its rather tired roof: 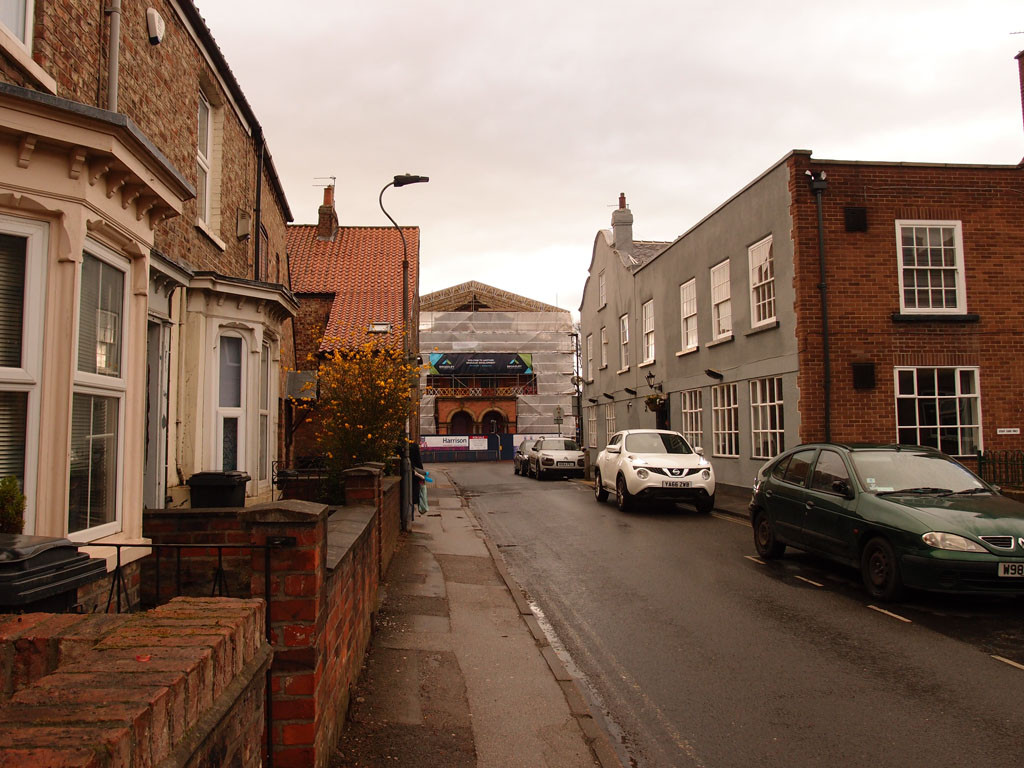 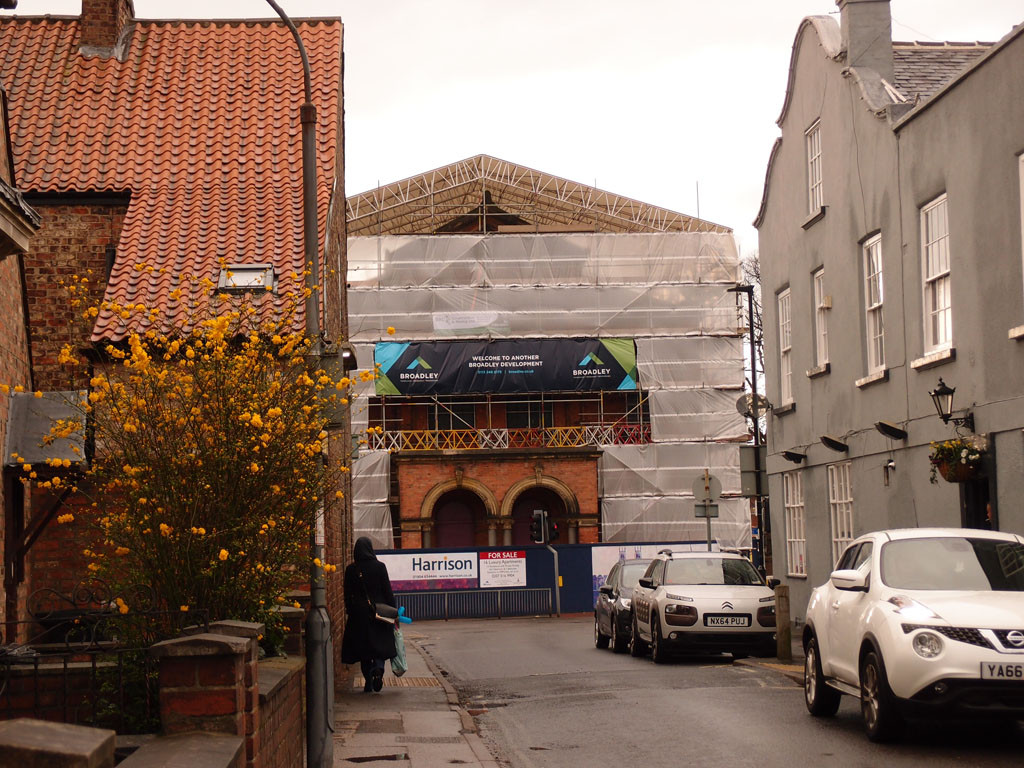 Clearly a temporary roof to cover the building while its roof was repaired (a complete re-slating, perhaps).

Some months on, here’s a view of the back of the building, on 12 June: 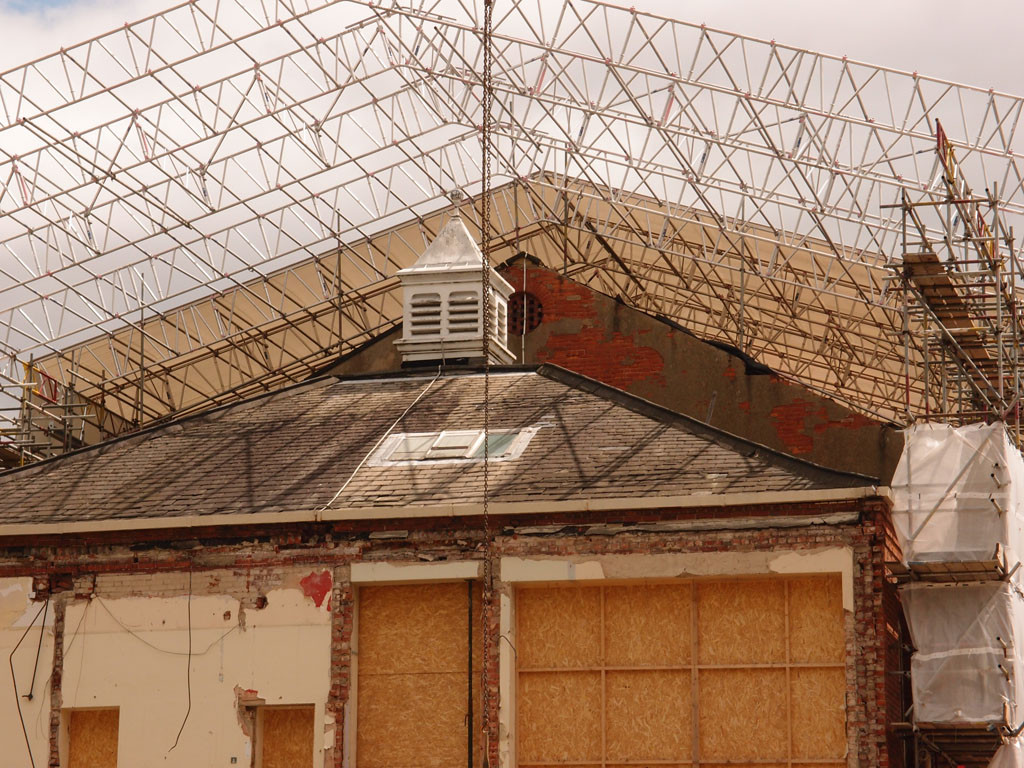 Also at the back, the framework goes in for new structures on what was the car park area, during the chapel’s decades in NHS use. 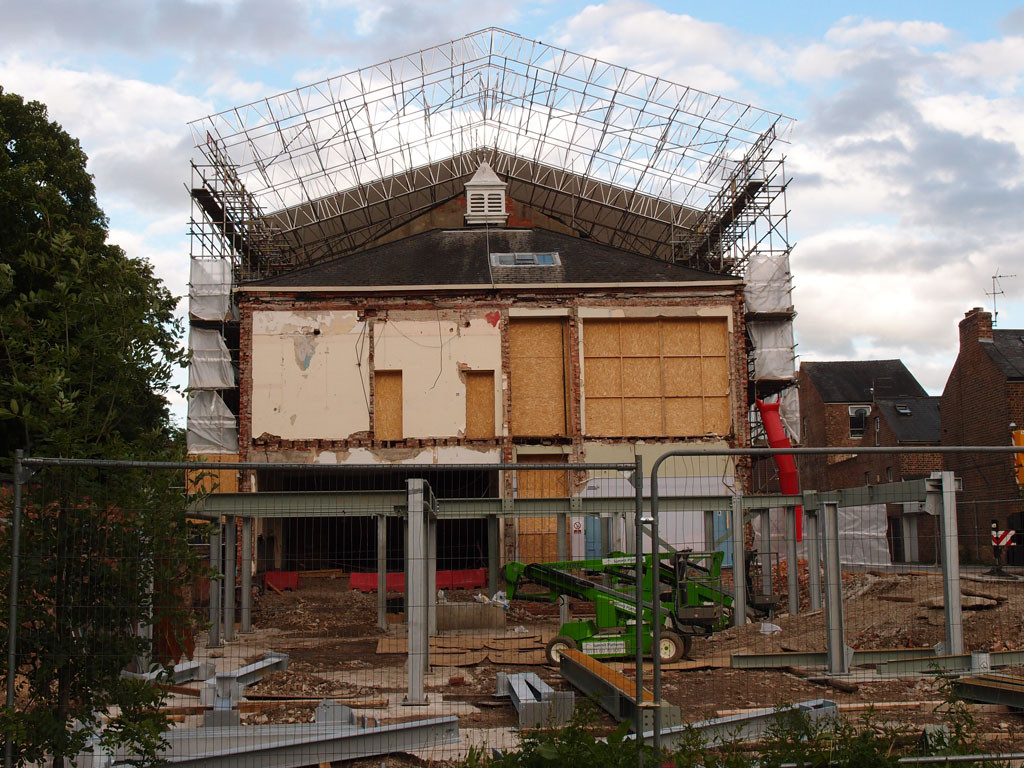 There has been some demolition, of a rear extension to the chapel, shown below on a photo from February this year and since removed: 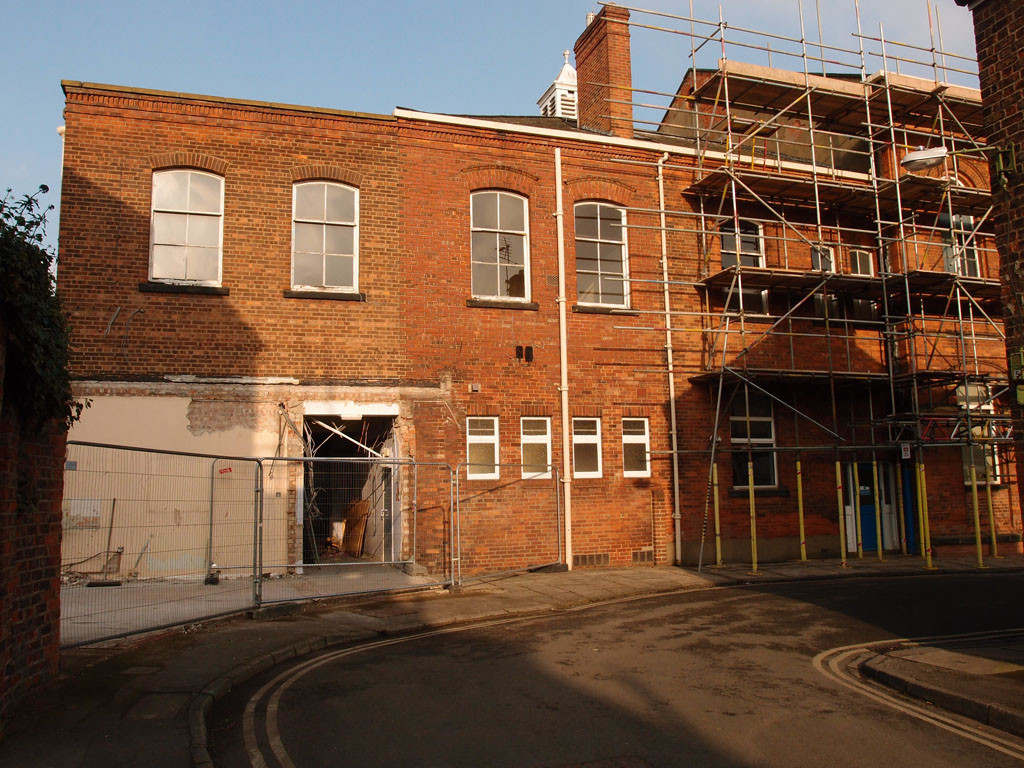 Climbing on the low wall on one side of the chapel it is possible to have a look through the windows at the interior. Hard to get a good photo because of the usual building site muck on the windows, but I did my best: 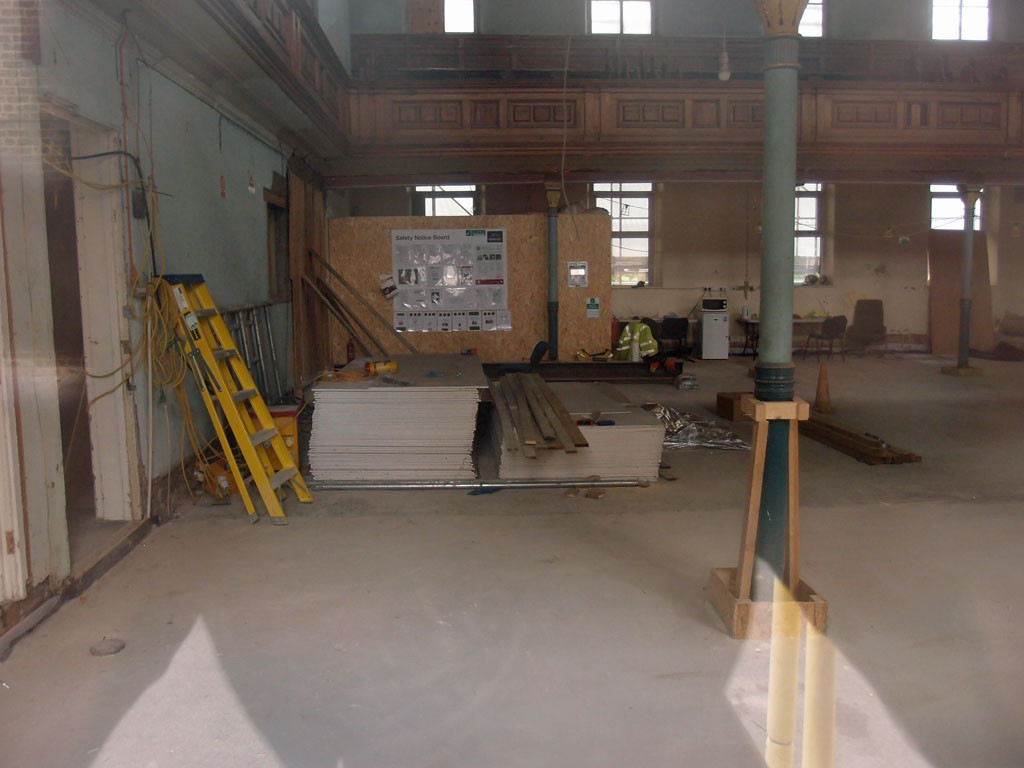 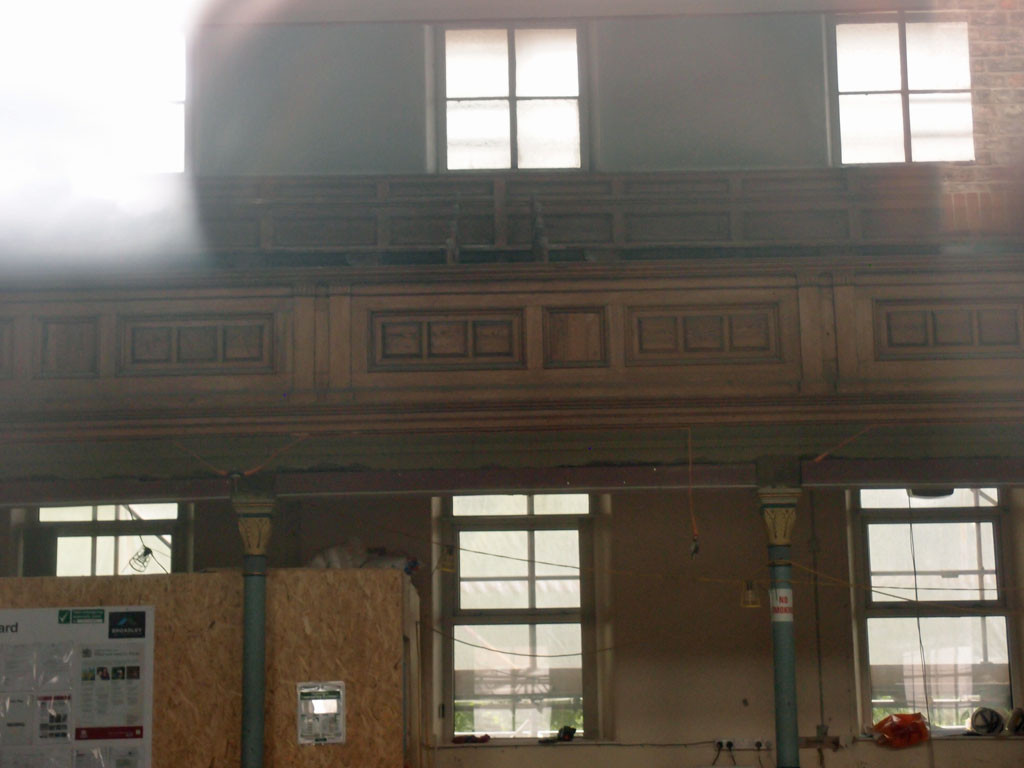 It seems that the historic features remaining up there are to be boxed in, rather than removed. The iron pillars are interesting too, and will clearly have to remain. I wonder if any of them will be visible within the Sainsbury’s store. I remember the Jacksons supermarket on Bootham had similar freestanding pillars and that the supermarket shelving had been constructed around them. Resulting in a rather cramped layout, as I recall. A bit more space to play with here.

Seeing historic buildings retained and repaired and remodeled is always interesting. Building sites are generally seen as a sign that a place is thriving, new developments indicating growth and confidence. But perhaps for some of us our hearts might sink a little at this kind of thing: 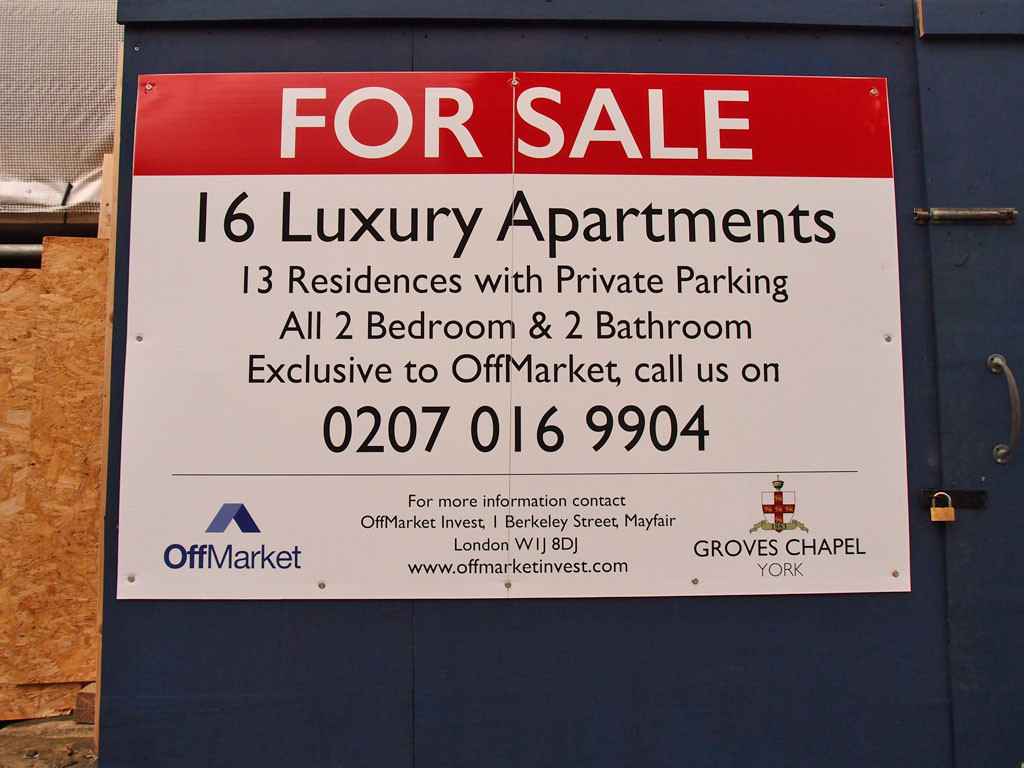 I searched for info on ‘offmarket’, and it means what I thought it meant. On the website mentioned in that ad above you can read about ‘lucrative investment opportunities’ and how to build ‘a diverse property portfolio that is based on a mixture of income generation and capital growth’, with ‘high-quality real estate at undervalued prices’.

The logo for the development, on the bottom right of the sign above, caught my attention: 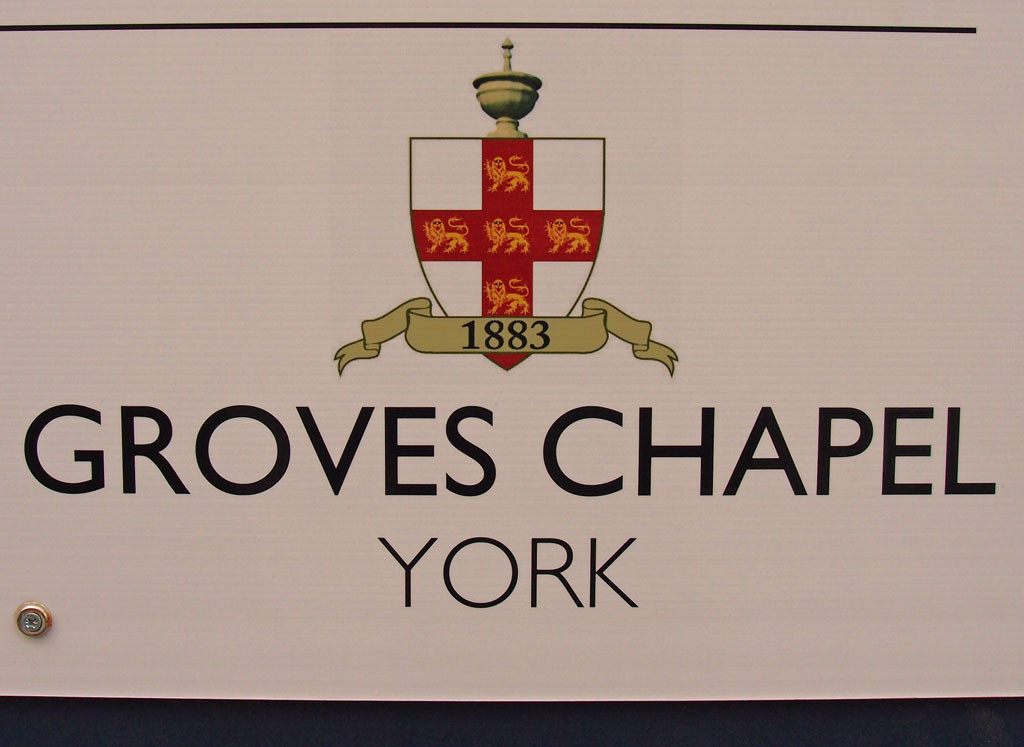 It appears to be the city arms, with the date of the chapel’s construction wrapped around it, topped off with an architectural detail.

I was quite surprised to see this symbol used in this context, for a private development being marketed by a company based in London selling flats to investors. Referring to the very useful book Heraldry and the Buildings of York, by Hugh Murray, I’m reminded of the many shields of arms on the city’s bridges and public buildings and structures. It’s an important civic symbol. One I thought you needed permission to use (see this story from the Press a few years back, when the BNP used it). Perhaps permission has been requested in this case, and given. If so I’d like to know more about that. Perhaps I’ve just misunderstood — heraldry isn’t my strong point.

Comments welcome, if you have information or thoughts to add.

But to bring cheer I thought I’d end the page with another sign noticed just a few doors along, as I walked off pondering, towards town. On the door of the club on Clarence Street: 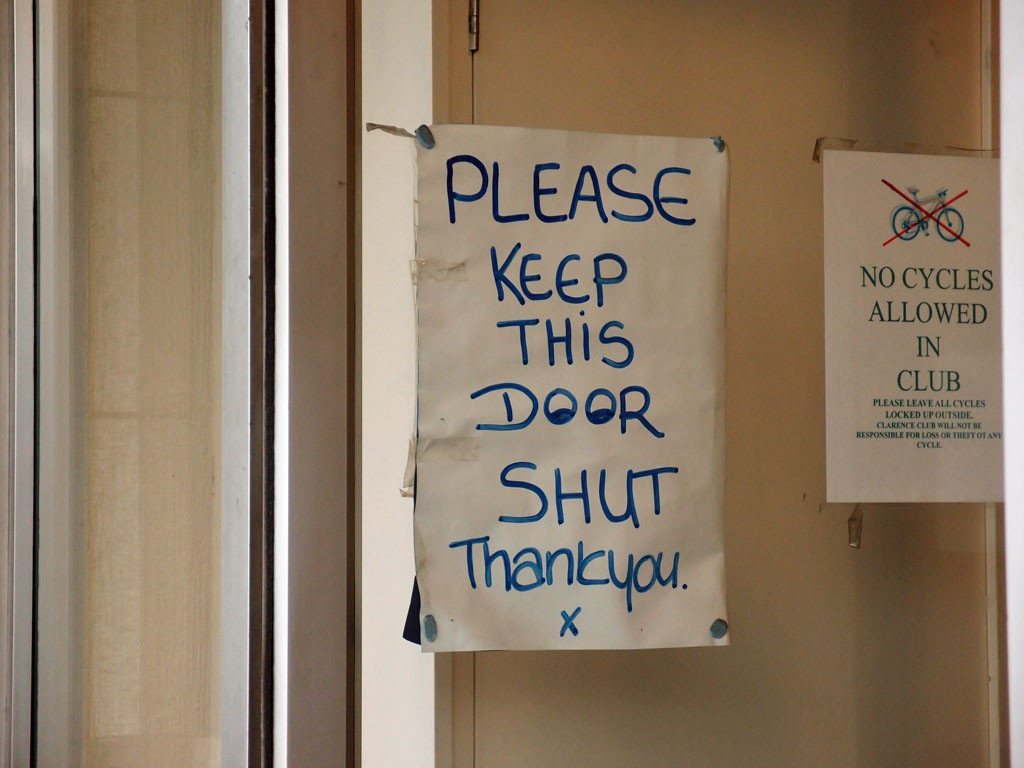 Nice to see that the tradition of making a double ‘o’ into a pair of eyes when doing a handwritten sign is still going strong. I love this sign and it makes me smile every time I go past.

If you’d like to support this continuing record of York and its changes, see this page or my Ko-fi page for more information. I’m currently trying to add something once a fortnight. See the archives for a full listing of pages, or join the mailing list for notification of updates.