Etty under attack from 1970s fountain 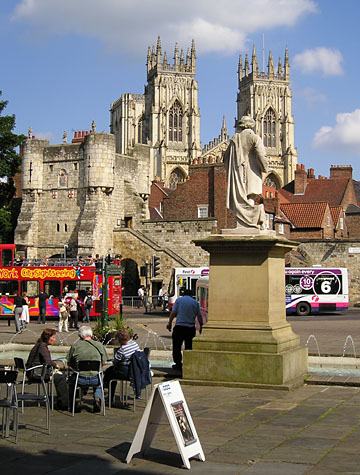 Following on from the ‘reinvigoration’ of King’s Square, consultation has begun on more ‘Reinvigorate York’ projects, including Exhibition Square.

A previously released artist’s impression of the square, in the Lendal Bridge trial leaflet, showed the square without the Etty statue in the middle of it, raising concerns that the statue was going to be relocated.

I assumed that this might be because of changing tastes, and that Etty on his plinth was seen as a bit old-fashioned. Or that it’s inconvenient having him right in the middle of the square, blocking any grand approach perhaps envisaged to the art gallery’s front doors when it reopens after its massive refurbishment.

But no. According to the Reinvigorate York information, relocation is necessary because Etty has been under attack from the adjacent fountain. 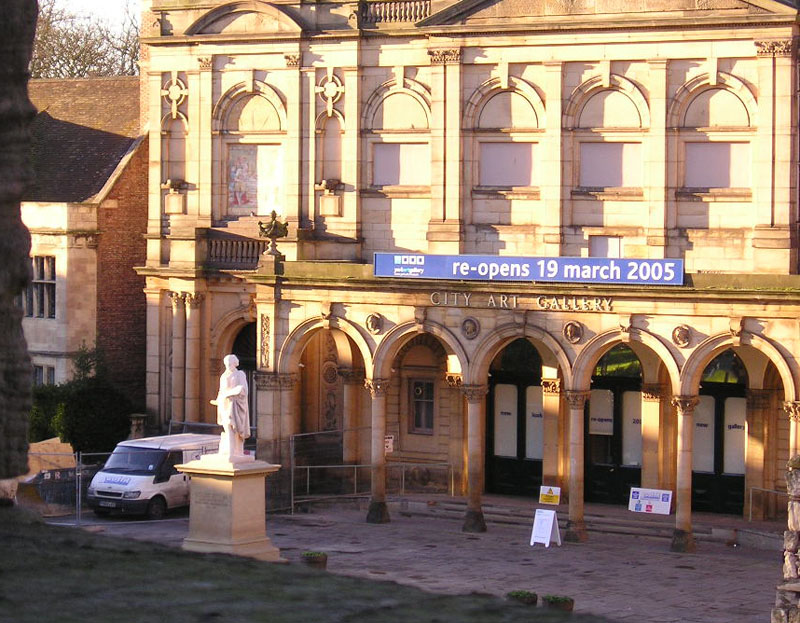 Here he is in 2004, not long after he was cleaned, looking very white. 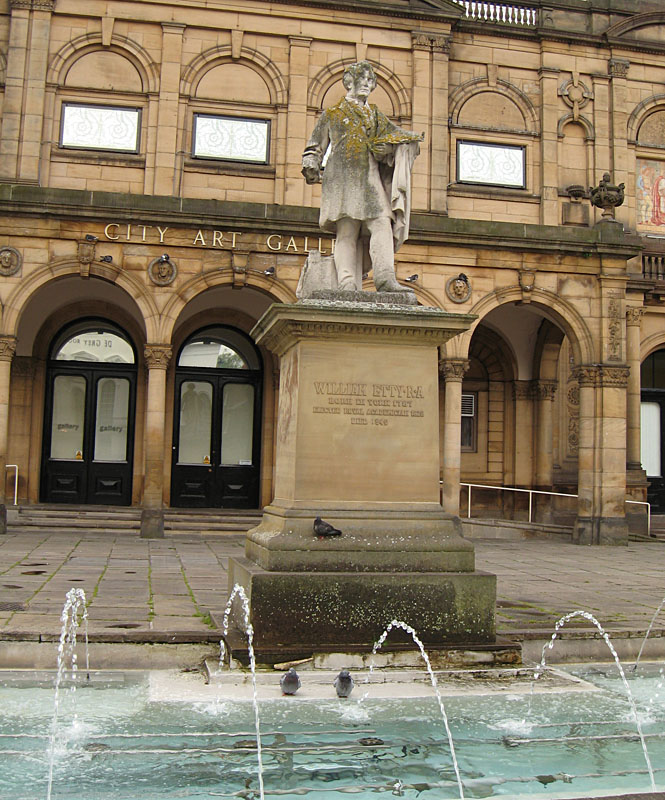 And here he is in July 2012. He does look a bit of an embarrassment, since he got covered in some kind of lichen/mossy growth. He’s got his own little ecosystem growing on him, and statues aren’t supposed to look like that.

So we have to decide whether we want the Etty statue or the fountain, as according to the Reinvigorate York documents, they can’t live happily together anymore.

“Conservation specialists have recommended that the statue and fountain should be physically separated to help to stop the statue being further eroded by water splashing from the fountain.”

Get Etty away from that fountain! It’s eating him! 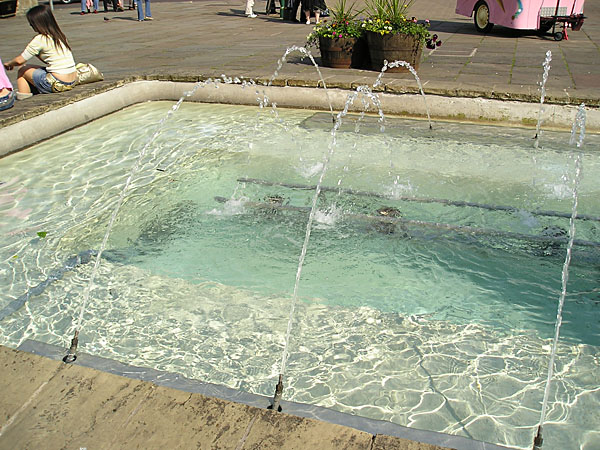 The fountain dates from 1971. It was provided by York Civic Trust.

As Ron Cooke – trustee and former chairman of the Civic Trust – is involved in the Reinvigorate York project I think we can assume that the suggested removal of the fountain is okay with the Trust. So I guess they could have gone ahead and decided to remove it without asking for our views.

After the generally unpopular and controversial remodelling of King’s Square, which involved the removal of some attractive and appropriate paving dating from the 1970s, there’s perhaps a bit of a shift in attitude, a response to public opinion. I’m imagining the discussions as these plans for Exhibition Square were drawn up: ‘Etty’s being eaten away by fountain based erosion. He’s a listed structure though so we might have to leave him there. So we might have to get rid of the fountain. It’s dated anyway. A bit 1970s.’ Looks of concern all round. ‘But you know how attached they were to those 1970s cobbles …’ 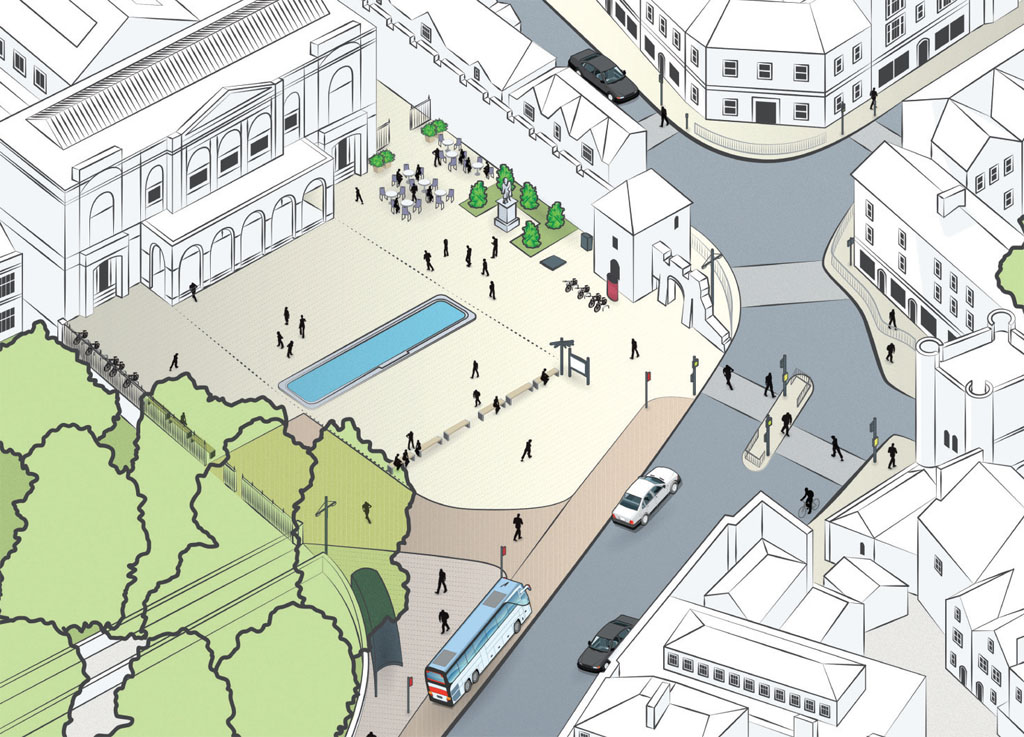 So one of the possible redesigns has the 1970s fountain retained in the middle of the square. Stuck on its own, looking a bit rubbish, too wide, too intrusive, not very interesting. Etty has been shuffled off to the side. 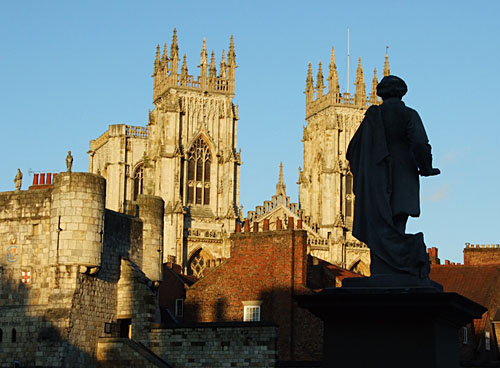 What Etty looks upon. Summer evening, 2007

I’m not a massive fan of statues on plinths, but this one is an important part of York’s story, and it was carefully placed here, so Etty was ‘looking’ at the city walls, Bootham Bar. Its positioning is perfect. It might be inconvenient now, I can see that, but, like Paul Woosey’s bench and the mulberry tree in King’s Square, its position is crucial to its meaning. If you shuffle Etty off to the side of the square then he’s looking at King’s Manor instead. Which removes so much of the story and context that we might as well stick him in West Bank Park in Holgate, with the statue of Queen Victoria.

So, 1970s fountain or the Etty statue? Which do we want to keep? Reinvigorate York consultation and information here, and comments welcome below.

Lisa @YorkStories is the creator, administrator, and writer of content on www.yorkstories.co.uk. She can be contacted on this link or via Twitter, @YorkStories
View all posts by Lisa @YorkStories →
Tagged  1970s, Etty, Exhibition Square, reinvigoration
To link to this page's proper location please use the > permalink