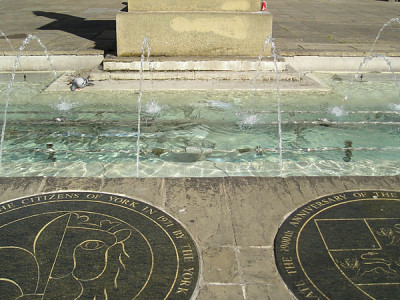 In that year York Civic Trust provided a new fountain for Exhibition Square. It’s still there, but as previously mentioned, it’s apparently eroding the Etty statue. And as the Etty statue is a listed monument, and the fountain isn’t, it seems more likely that the fountain will have to go. They can’t live together anymore.

So let’s focus our attention on the fountain, and let’s leap back to 1971. The Civic Trust’s annual report included a piece on this new fountain for York: ‘a gift which all its citizens could enjoy.’

It’s always good to read contemporary accounts, to get the proper picture of what people thought at the time, because we forget what we thought, as we get used to things being there and take them for granted. 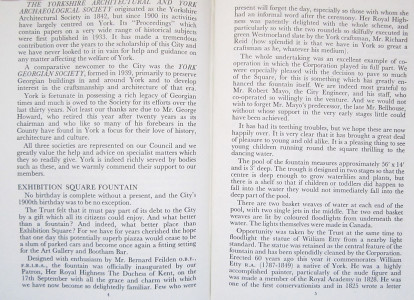 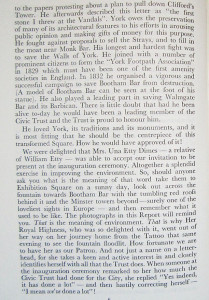 The joy and sense of achievement and a job well done was recorded back then when this fountain was new. These images can be enlarged if you’d like to read the report. Please do – it’s very cheering and inspiring. And it reminds us of just one of the many gifts the York Civic Trust has given to the city and its residents.

The report tells us that the fountain was designed by Bernard Feilden, OBE, and that the slate plaques were carved by York carver Richard Reid (probably better known as Dick Reid, and we now add OBE to his name too). 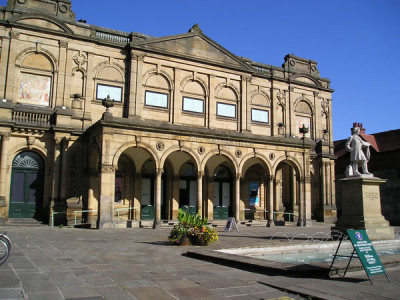 Exhibition Square on a sunny morning in 2006

It was, says the report, ‘an excellent example of co-operation in which the Corporation played its full part.’ The council (the ‘Corporation’) repaved around the fountain – presumably the slabs that are still there today. The Etty statue was cleaned, and floodlit.

‘Altogether a splendid exercise in improving the environment. So, should anyone ask you what is the meaning of that word take them to Exhibition Square on a sunny day, look out across the fountain towards Bootham Bar with the tumbling red roofs behind it and the Minster towers beyond — surely one of the loveliest sights in Europe — and then remember what it used to be like.’

I don’t remember what it used to be like, but photos show that by that time the Etty statue was surrounded by parked cars on tarmac. The view across to Bootham Bar, the red roofs and Minster, remains. It’s still lovely, ‘proper York’, and it’s the main image at the top of these pages (full effect visible if you’re viewing on a larger screen). 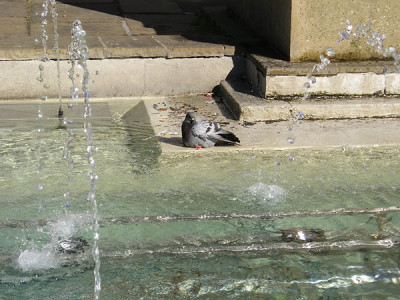 I’d forgotten how many photos I’d taken of the fountain. I did find it aesthetically pleasing, in the morning light in summer, when lit in the evening. I’m not sure whether it’s still lit in the evening – I stopped paying attention and took it for granted. Not alone in that I’m sure.

To me it has no strong personal significance, but it was a gift to the city, and it clearly meant a lot to York Civic Trust when it was placed here in the square back in 1971, and that should be recorded, with appreciation.

A new fountain/water feature will probably replace it, but it won’t mean as much as the installation of the 1971 fountain. The wish to ‘Reinvigorate York’ hasn’t produced anything as vigorous as that passionate and inspiring description from 1971 : ‘It is a pleasing thing to see young children running round the square thrilling to the dancing water.’ Now we get phrases like ‘transforming the economic, cultural and recreational offer’.

If you were one of the children of the 1970s running through the water, or have other thoughts you’d like to share, please add a comment. Please, on these important records of what we knew of York in the 20th century, share it on the proper open-to-all internet, the online version of the public square, rather than on Facebook or Twitter. That way there’s more chance people in the future will be able to find it, this history of ours. Facebook and Twitter don’t care about your real history, what you remember about this place we know. I do.

January 2021: It’s now some years since the above was written. The Etty statue is still there, and so is the fountain.

They looked particularly handsome, and seemed to be enjoyed, during the Bloom York festival a few years back.

Lisa @YorkStories is the creator, administrator, and writer of content on www.yorkstories.co.uk. She can be contacted on this link or via Twitter, @YorkStories
View all posts by Lisa @YorkStories →
Tagged  1970s, Exhibition Square, fountains
To link to this page's proper location please use the > permalink