Etty and decades of change, in a city square 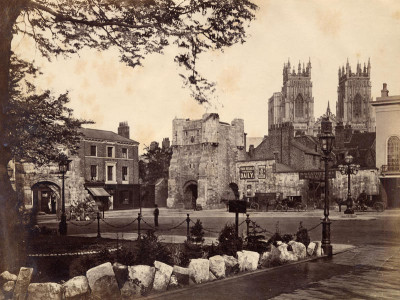 There are many photographs of Exhibition Square in the City of York archives, illustrating the changes in over a century of use. Seems a good time to look at some, in the light of the current consultation. (Archive images used with permission.)

First, this photo from its early days. Our eyes are drawn to the splendid Minster and Bootham Bar, but here for the purposes of this page we’re focussing on the foreground. Note the ‘random lumps of stone’ style edging around some kind of flowerbed in front of the art gallery (known as the Exhibition Building, back then, when new). From the abbey, perhaps, like the stone around the Museum Gardens. Note also the massive tree to the left. 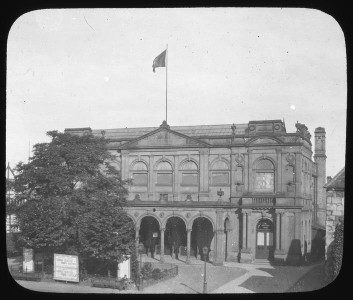 Here’s a better view of the massive tree, from around the same time. Before the construction of the square and Exhibition Building this area was known as ‘Bearpark’s Garden’. (Not because it was a park with bears in it, but because it was used as a nursery garden by a Mr Bearpark.) This large mature tree must have been retained from that time.

Modern developments often try to retain mature trees on site and it would appear that our Victorian forebears valued them too. Or this one, anyway, in this location. 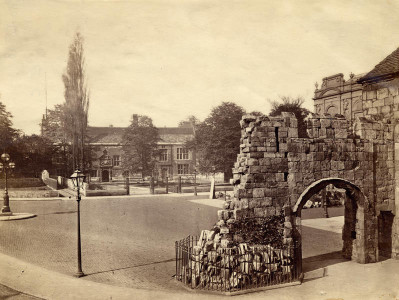 The paved surface back then was a mixture of materials, larger slabs near the art gallery and smaller setts further out. 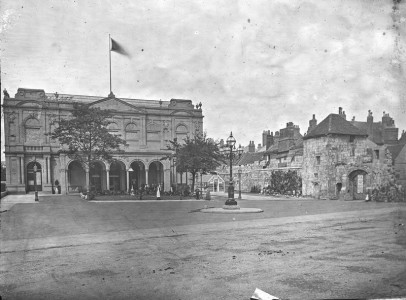 A little while later and the impressive mature tree has gone, replaced by two young trees. 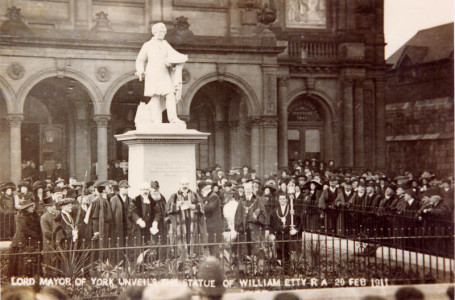 By 1911 they’ve been removed. The statue to William Etty is erected in this small garden area in the square in front of the art gallery.

This photo is one of several taken on the day of the statue’s unveiling (including a nice image of the moment of the ‘reveal’). It was clearly an important event, just over a century ago. 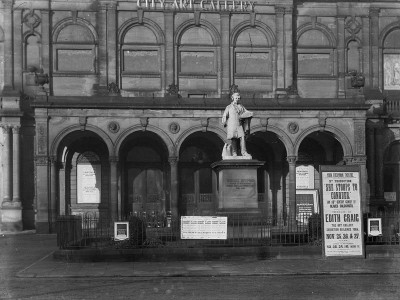 In the 1920s, Etty settles in to his protected garden area, with adverts for cultural happenings resting against the railings around him. 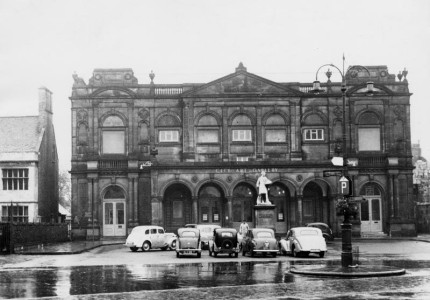 In the 1940s. Cars cluster around the Etty statue, as they did until about 1971 © City of York Council

A lovely image of a rainy day in the 1940s. Cars cluster around Etty, all facing inwards, like an appreciative audience.

Etty stands rock solid, just the same, while the square changes around him, for decades filling with cars, and more recently, open-top buses for the tourists.

A photo in Patrick Nuttgen’s book York (Studio Vista, 1970) shows that the space around Etty has been reduced to the bare minimum by the end of the 1960s. There’s just a thin strip of paving, only a little wider than his plinth, in front of and behind it. The square by this time has marked parking bays, white lines on the tarmac. Parking now is more regimented than it was in the 1940s. The one car parked there faces outwards, ready for the off and not paying any attention to Etty. 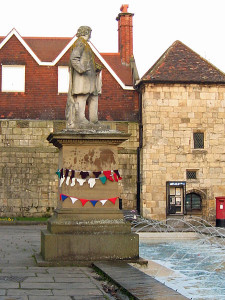 In 1971 the square changed again, and a fountain was placed near Etty’s plinth. The next page will focus on this fountain. Meanwhile here’s an image taken more recently. Etty’s plinth decorated with knitting and brightly coloured yarn, during last year’s yarn bomb event.

What will Etty be looking out across in the 21st century I wonder. Perhaps he won’t be looking the same way, but will be shifted across to the side of the square to look at King’s Manor instead, as in one of the ideas suggested in the proposals currently open for consultation. Perhaps he’ll look out across a new water feature/fountain.

Our idea of what’s appropriate for our cities changes over the generations. The Esher report, published in the late 1960s, includes an illustration of proposals for the square back then. Most striking is the suggestion that a line of lime trees should be planted to mark the boundary where the square meets the road. Lime trees. If you want to see what happens to lime trees in urban environments look on Burton Stone Lane or at the pathetic remnants of trees at the front of St John’s on Lord Mayor’s Walk, and on Penley Grove Street.

No more big trees anymore. We don’t have the room. If Esher’s trees had been planted they’d be felled now to fit in a bus stop, as a tree on Museum Street will be soon.

Etty’s standing there through all this, sighing perhaps silently in stony statue-like way.

Lisa @YorkStories is the creator, administrator, and writer of content on www.yorkstories.co.uk. She can be contacted on this link or via Twitter, @YorkStories
View all posts by Lisa @YorkStories →
Tagged  Etty, Exhibition Square, reinvigoration
To link to this page's proper location please use the > permalink