The festive sheds and barriers are back 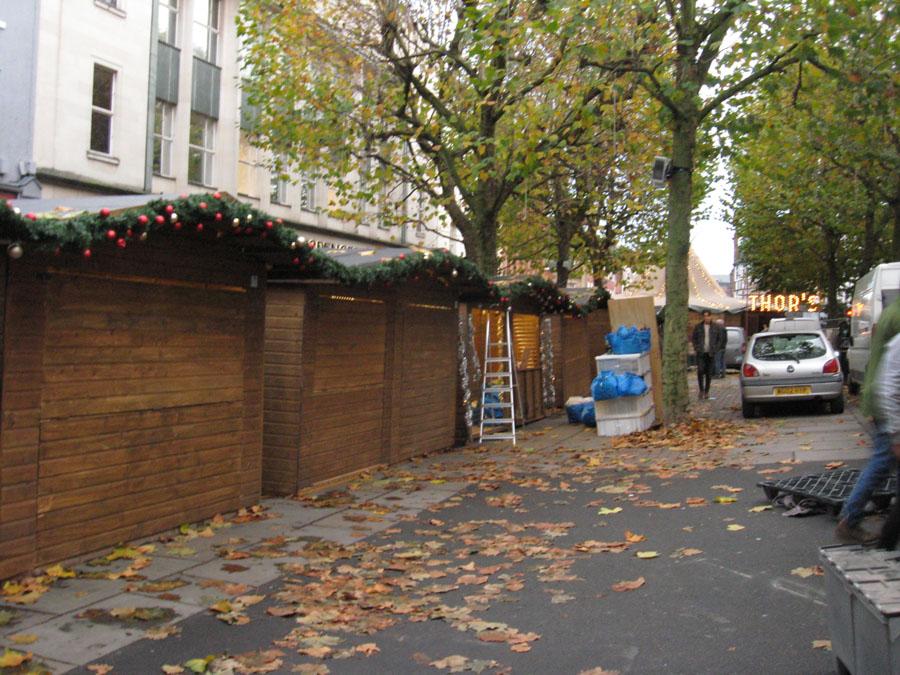 York’s Christmas market is back again this year. It’s apparently judged to be ‘the third best in the UK’.

I’m rather baffled by this. I don’t mean the ‘third best’ thing, who cares, I mean the fact that once again there are a lot of sheds crammed into Parliament Street and St Sampson’s Square.

Back in 2019 the Christmas market here was so popular that it ended up being a bit of a nightmare. The Press reported the ‘festive queuing and shuffling’.

I wrote about it, and the dangers of ‘overtourism’, back then. It feels like four years ago, but I’ve realised that my perception of time has been quite distorted by the recent stresses, so that two years feels like four. Not alone in that, I think?

Strangely, in 2021, we’re once again encouraging a lot of people to cram themselves into one part of the city centre, and because of this it’s apparently then necessary to surround it with a ‘ring of steel’ – the return of the ‘hostile vehicle mitigation and pedestrian barriers‘ we saw back in 2019. 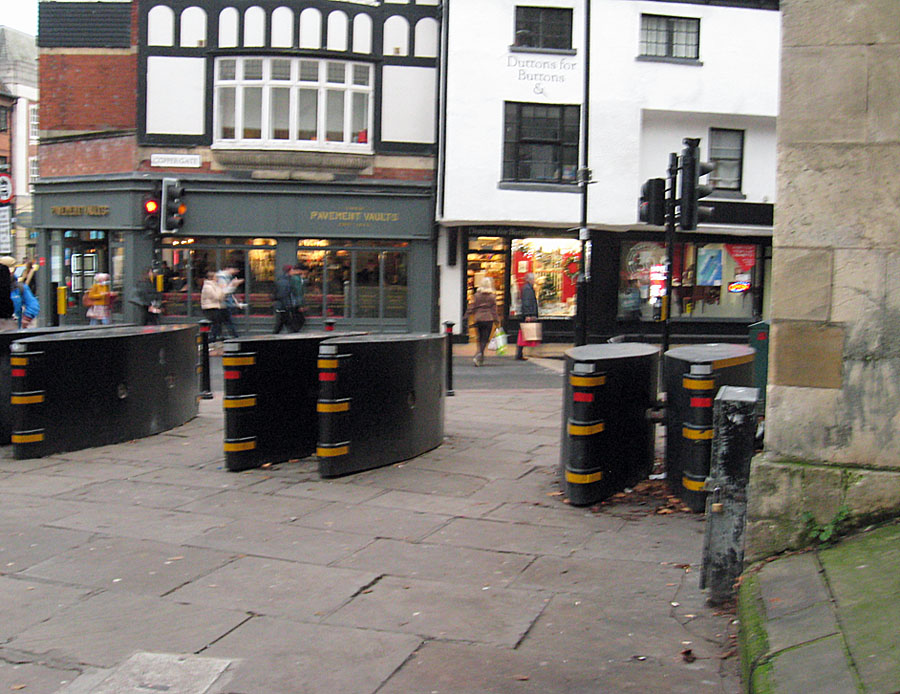 They’re meant to protect the city centre against terrorist attacks, and to make us feel safe. They just make me feel despondent. So does the Christmas market. Am I just an old misery? Perhaps.

This old misery took herself into town a few days ago, to have a look at the festive sheds and the barriers, before the market opened. 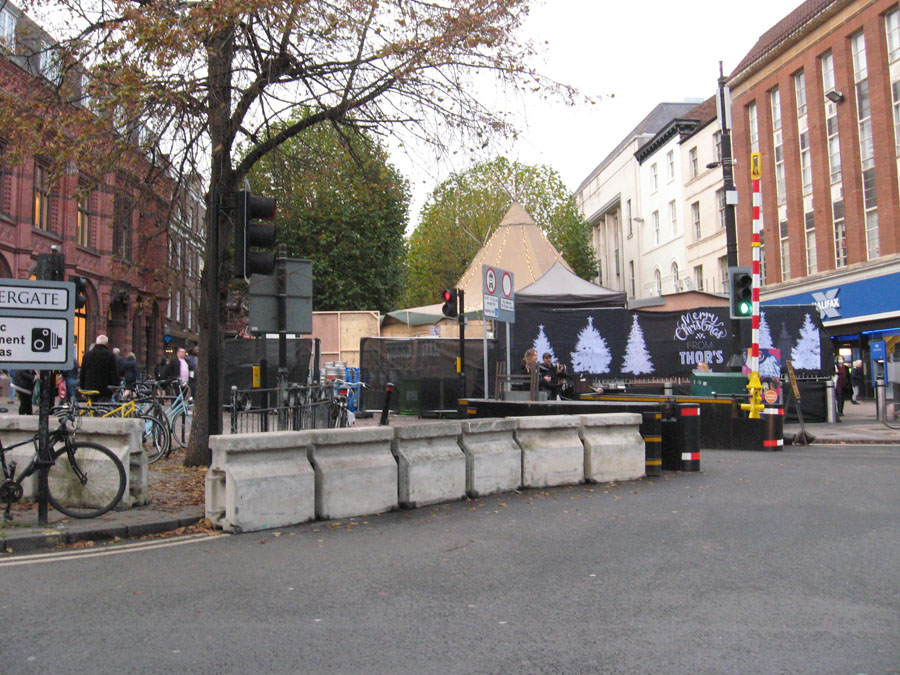 Weren’t we supposed to be building back better, or at least differently? This looks just like 2019 to me. Same old thing.

But a bit more confused, as there’s so much mixed messaging, so many contradictions. And perhaps quite a bit to feel angry about, in terms of what this all costs, and who it benefits.

The Christmas lights switch-on event in the city centre was cancelled because of fears about Covid spread, as a lot of people would then be gathered together at one time.

A spokesperson for Make It York said: “After much consideration the decision has been taken in partnership with York BID not to hold a physical light switch on event this year.

The event is always hugely popular, drawing in large crowds over a short period of time – and to ensure the safety of all visitors and residents we will instead focus on showcasing our winter light scheme via our online channels.”

But clearly the Christmas market – also drawing in large crowds over a short period of time – is thought to be a good idea. Presumably because it makes a lot of money, for some people involved with it. Though Make it York, who organise it, keep asking for more.

The Christmas market is clearly popular with visitors, but is seen by many York residents as something tedious and problematical imposed on us, rather than being something to get excited about. Many residents just quietly avoid it, and go elsewhere.

All things considered, I’m really surprised to see the Christmas market resurfacing this year. ‘Roll up, roll up, come and queue and shuffle round our festive sheds, at the third best Christmas market!’

Its arrival seems to go against a developing trend of trying to encourage more residents back into the city centre. The city council recently asked for our views, in ‘My City Centre York’. It aims for ‘a new city centre vision':

A vibrant city centre, where a wide range of people want to spend time, live and work; a place where businesses thrive, sustainable communities grow, and a varied cultural and social life flourishes…

I didn’t respond to the ‘My City Centre York’ survey, but it looks like a lot of people did. On the council website there’s an interactive map, with comments added about particular streets and areas. I thought I’d have a quick look at Parliament Street, which has a lot of ‘thumbs down’ markers over it. The first one I selected reads:

Always seems to be hired out to out of town travelling trades. Doesn’t support the local economy. Would be the best cafe / restaurant street.

I could find no comments saying that the Christmas market is a wonderful thing really valued by local residents.

So another contradiction – the council wants to encourage more residents back into the city centre, wants to make it more inviting, so it’s not ‘just for tourists’, then Make it York (agency owned by the council apparently dependent on council money/bailouts) plonks in the middle of it something that appears to be designed to attract more tourists. This then needs expensive barriers erecting around it, which make it harder not just for vehicles to access it, but funnels pedestrians and wheelchair users through narrow channels between big lumps of metal. How odd.

When not preoccupied with fears about Covid, and before the new festive anti-terror barriers arrived to remind us to also be fearful of terrorism, we may have found time to be fearful about climate change and the effects of our behaviour on the planet.

Many of us have recognised for some time that there are easy ways to lessen our impact, and one of the easiest ways to do that is to not buy loads of stuff we don’t need. Or to feel at certain times of year that we should buy stuff for other people that they don’t need or want. I got the impression that many more people were agreeing, between families and friends, to stop the Christmas gift-giving for us older people with enough stuff already. Particularly if you’re going to get in a car and drive miles to buy the stuff, rather than shopping locally, as I thought we were being encouraged to.

There are, of course, many shops in York, interesting independent ones, there all year round, where you could do your Christmas shopping, as you want to/have to.

But apparently there’s still enough demand for York to once again have its big Christmas market, and we should just ignore all of that. Maybe go back to hand-wringing and grand words and promises after the festive sheds are packed away.

How it could be …

We’ve had one year when we saw how it could be different. Last year, because of Covid, Parliament Street didn’t fill up with festive sheds and shuffling queues. It had the carousel, and some food stalls, and very nice it was too. When I walked through it one afternoon in December it had a very pleasant, gently festive atmosphere. I haven’t forgotten this. It was a glimpse of how York’s Parliament Street could be a gathering place for festivities that felt like they were part of York, naturally growing from it, rather than being plonked upon it. 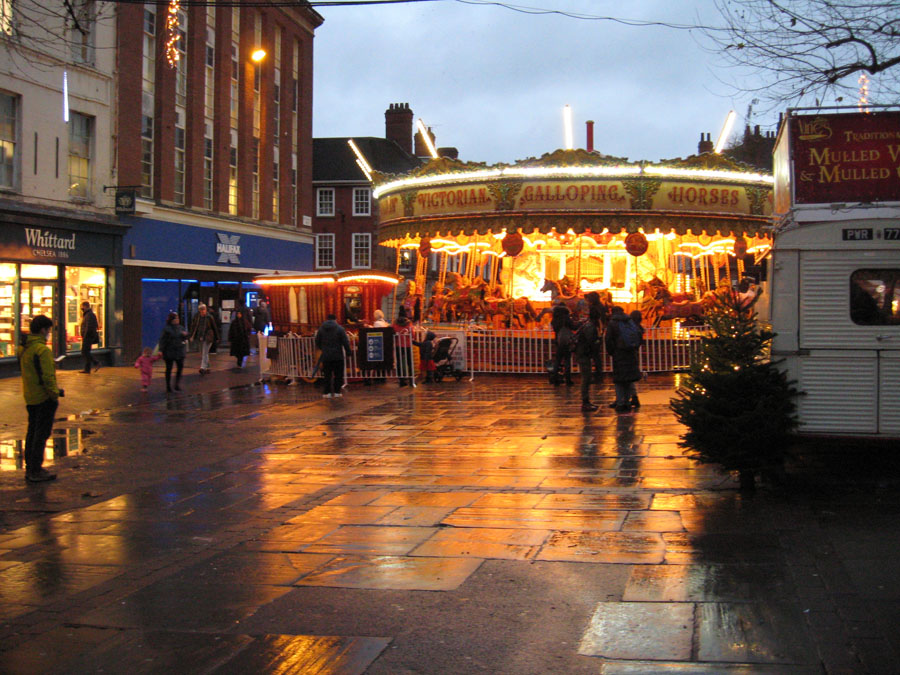 Even the problematic Parliament Street paving looked better, reflecting festive light, and giving us more room to move than is usually the case here at this time of the year. 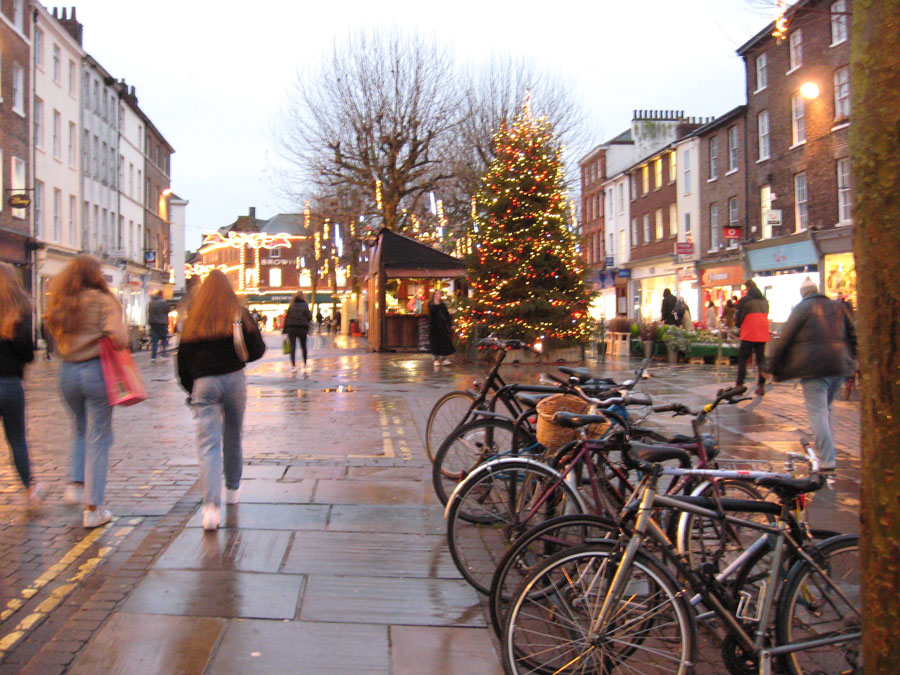 Last year at this time things seemed quite quiet in town. This year, earlier this week, even before the market had opened, the city centre already seemed very busy. I was also in town briefly in half term, and the city centre was full of people of all ages out enjoying a mild autumn afternoon. I walked through King’s Square, where crowds were gathered to watch one of the street performers. Just like the old days, and good to see.

The city centre would presumably have continued to flourish without the tourist-pulling overcrowded Christmas market.

It’s possible to avoid the Christmas market, of course. But if you want to go into the city centre for some other reason, it’s quite difficult to ignore the barriers set up at many points around its periphery, and these are what prompted me to write this page. To me they’re depressing, essentially pointless, questionable at best. And they cost. And again, Make it York needs ‘support’ from the council to pay for them: “support with the cost of counter-terrorism measures during the Christmas market period, at a cost of £78,900.”

Hope all tax payers are happy with this. 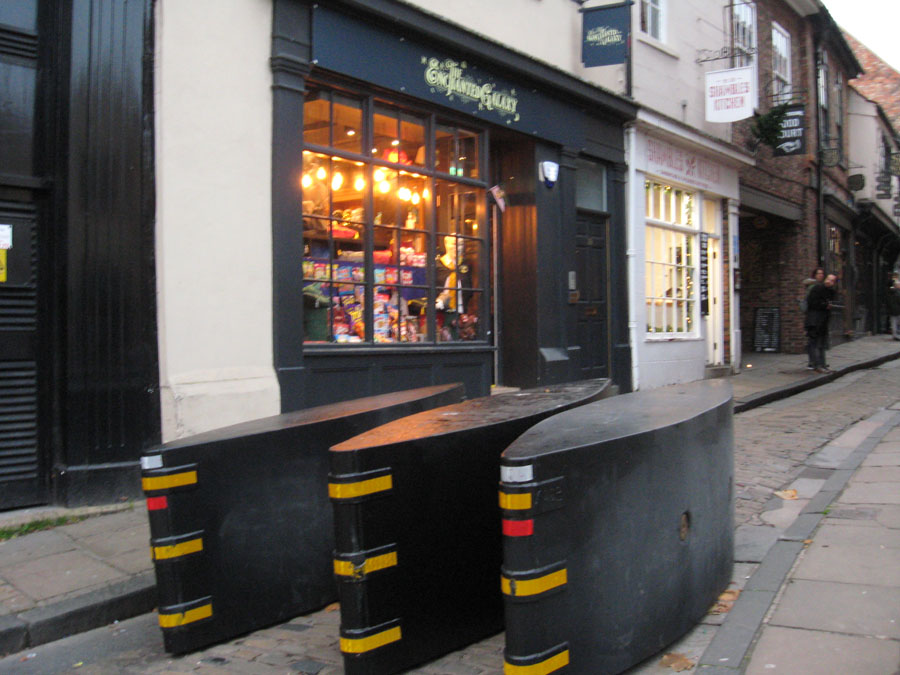 Apologies if I’m not able to post pages on here so often, and that when I do I sometimes seem to be repeating myself. Some problematical/questionable things need looking at and questioning more than once. I’ve lived in this city for a long time, and this resident’s record of York and its changes continues. Comments below and coffees via ko-fi are welcome, as always.

Lisa @YorkStories is the creator, administrator, and writer of content on www.yorkstories.co.uk. She can be contacted on this link or via Twitter, @YorkStories
View all posts by Lisa @YorkStories →
Tagged  overtourism, Parliament St
To link to this page's proper location please use the > permalink