Page 1: Kirkham to the woods

This walk follows part of the route of Walk 1 in John E Eckersley’s book ‘Exploring Lake Pickering’, though we diverted from it at Welburn and returned via a shorter route.

I’ve mapped our route on a Google map. For relevant extracts from the OS maps, see the foot of the page. 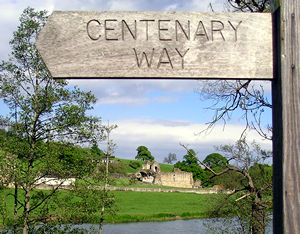 We
started our walk by the bridge near Kirkham Priory, and followed the Centenary
Way sign. On this photo the ruins of the priory can be seen in the distance
on the other side of the river.

Note: John E Eckersley’s book guides the walker a little further up the
road over the level crossing, before then bearing right alongside the railway
line. This is probably the preferred route if walking across a railway line,
as we’re about to to, makes you nervous. 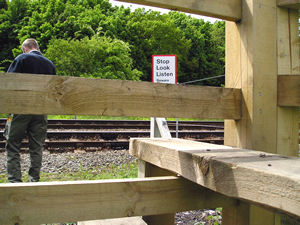 I
was shocked when I realised that the stile here appeared to be guiding us
onto the railway line. These days, when government agencies and everyone
else seems to be trying to protect us from any possible risk ever (I’ve
even seen a bouquet of flowers marked ‘Do not eat’), it seemed highly unlikely
that anyone could be allowed, never mind encouraged, to walk across a railway
line.

While I was thinking all this, my companion, as can be seen from the photo,
was already approaching the track. I insisted he wait there until I caught
up with him so I didn’t have to go across on my own. 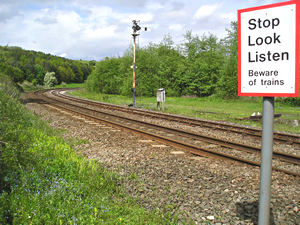 Phew.
Here we are at the other side of the railway line. This line is the York-Scarborough
line, and is a really pleasant route by train, including views of Kirkham
Priory. 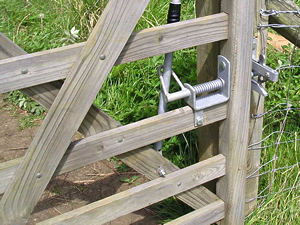 We then follow the path through some fields alongside the railway line,
climbing away from it until we meet a wood. But I’d like to pause for a
moment to admire this gate. There were a lot of these, and what fine pieces
of craftmanship they are. I’ve no idea who makes them, but I think their
handiwork should be admired. 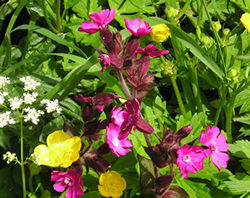 There
were some beautiful patches of wildflowers. I’m not sure if it’s just that
I’m older and so notice these things more, but it seems that there are many
wildflowers around again now that were maybe less common a couple of decades
ago.

I haven’t enhanced the colours in this photo, they really were this bright. 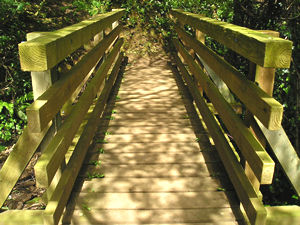 I love these wooden bridges that cross little streams – as long as there’s
no trolls underneath.

Distance: 5 and a half miles approx.