Page 3: Welburn back to Kirkham

See this route plotted on a Google map. 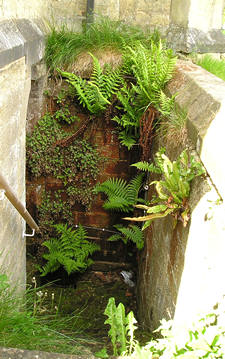 Welburn
is a lovely village, but it appeared to be closed for the afternoon. We
admired the attractive houses, closed pub and closed shop on the main street,
and I hoped the gnawing hunger would pass, while making a mental note to
myself to always bring more food than I think I’m going to need.

Leaving the main street we headed for the village church, intending to stop
following the route in John E Eckersley’s book and find the quickest route
to return to the car, parked in Kirkham. But we had a quick look at the
church and the churchyard. At the back of the church I found this lovely
collection of native ferns, all growing from the brickwork by some shady
steps. Sadly, I don’t think you can eat ferns. 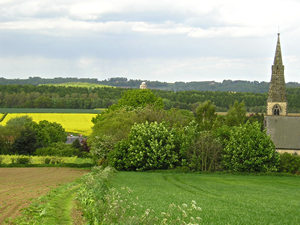 Leaving
the churchyard, we diverted at this point from the route in the book, and
used our OS map to find the quickest way back to the car. I say ‘we’, but
actually it was my other half. Apparently someone has done a study proving
that women are genetically programmed to be unable to read maps. I am however
trying to hone this unladylike skill.

Anyway, outside the churchyard we turn left and follow the right of way,
away from Welburn, along a field boundary. Looking back, we can see the
church spire, and in the far distance, in the centre of the photo, the Castle
Howard Mausoleum. 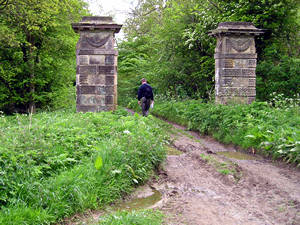 As
we approached the edge of the field, the path continued along this track
between two handsome old carved stone pillars. Presumably something to do
with the Castle Howard estate, but apparently just stuck there in the middle
of nowhere in particular. 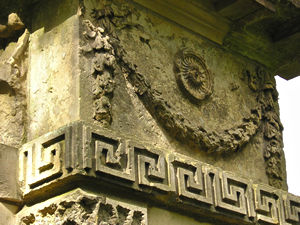 They
are rather splendid. I like this kind of thing, where some handsome carved
stonework just stands there for no reason in particular, presumably useful
at some point, and now just attractive and weathered, with bits crumbling. 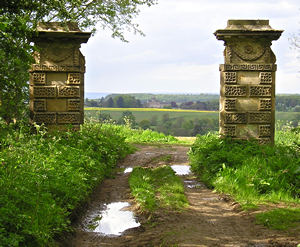 It becomes clearer that their placing was deliberate, as you walk further
along the track, and look back. It’s hard to see in a photo this size, but
these posts frame a view. Right in the centre of them, your eye led there
by the long track between, is Castle Howard, in the distance across the
fields. 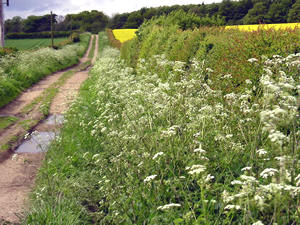 From
this point, it’s a fairly straight farm track, which is marked on the OS
map as Whitwell Road. It takes us back towards the A64. Here, we’re looking
back the way we’ve walked. I’ve included this photo because it seemed to
be a good representation of England in May – the flowering cow parsley,
the hawthorn hedge, and – errr – the yellow field of rape seed crop. (Possibly
not so traditional.) 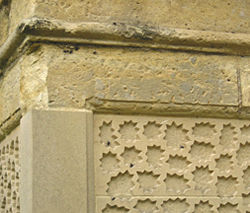 At
the end of the path, as we approach the A64, this last interesting detail
– more pillars. A pair of what appear to be more old gateposts, on either
side of the farm track. Restoration work is again obvious, as the lower
section looks recently carved.

There’s a layby in front of us, and we can hear the A64 and its traffic
rushing by. I’ve got no more photos of interest, but I would feel bad abandoning
you here by the A64. So if you are trying to follow this walk by my rather
poor directions, please read on for continuing poor directions which take
us back to Kirkham Priory.

Cross the A64 with extreme care, and please don’t sue me if you get run
over by a lorry. Bear right a short way, then a road leads off from the
A64 to the left (Sheperdfields Lane on the OS map). Follow this road until
you come to buildings on the left. Please note that the right of way here
seems to have been recently diverted slightly. It now goes through the farm
buildings – if you look closely you can see the arrow marking the right
of way on a kissing gate between the buildings.

When we passed through here, there was someone apparently doing archery practice across the right of way, and we were unsure as to whether we could continue, as the arrows flying through the air were rather offputting. After some shouting to attract the archer’s attention, and a few friendly words, we managed to pass through unscathed. I mention this only because a) it was quite funny and b) if you find the same thing, and get an arrow in your head, I don’t want you to sue me because I didn’t warn you.

After dodging the flying arrows and negotiating the kissing gate, bear right across the field to the stile in the bottom right-hand corner.

The right of way continues downwards across a field, towards the York-Scarborough railway line. Once you get to it, you can either cross by the stile – which means walking across the track (and then turning right, to head back to the road) – or if nervous, you can turn right and walk alongside it, back to the road, where there’s a proper, staffed level crossing with gates. Turn left to cross the railway line and you’re back by the bridge near Kirkham Priory.