See this walk plotted on a Google map. 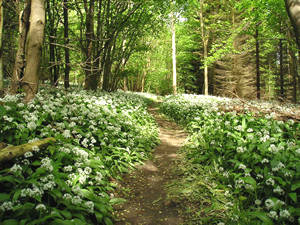 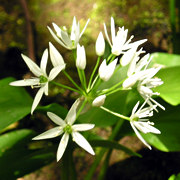 We were in pursuit of bluebell woods, later in the walk, but this wooded
area was carpeted with the white flowers of wild garlic, and it was startlingly
beautiful too, as the white flowers reflected the light that filters through
the branches onto the woodland floor. It stretched as far as you could see. 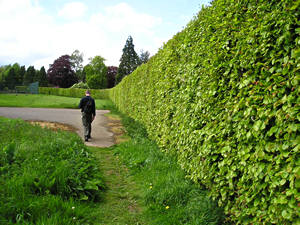 We
emerge from the woods via a gate on our left, which takes us alongside this
large beech hedge. My companion walking ahead makes a slightly boring photo
more interesting (and indeed is now used to me saying ‘Can you walk ahead
a bit?’) 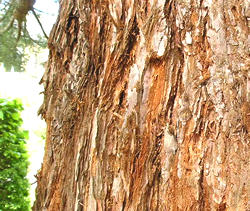 As
we turn right through a gap in the hedge, and follow the road to the left,
there’s a massive redwood tree by the road. John E Eckersley’s book, which
we were using as our guide, drew this tree to our attention, and it suggests
we try punching the trunk. As I approached the trunk I could see, from its
rather battered look, just how many people had done this before us, so I
restricted myself to a gentle tap. Yes, it has spongey bark.

Call me a soppy old tree-hugger, but I think you and the tree would have
a more memorable moment if you admired it rather than punched it. (You could
try hugging it too, but you’d have to have very long arms.)

Trees are generally far more noble and life-enhancing than any of us puny
little humans. So I recommend that rather than bash its handsome bark to
bits, anyone visiting should stroke the tree instead. If you want to punch
something, visit York city centre on a weekend night, about 11.30, there’s
usually someone looking for a fight.

We then walk through Crambeck village, and approach the A64. I didn’t take a photo of it, as it’s just a busy road. This is potential danger spot number 2. It’s often difficult enough driving onto the A64 from a side road, but walking across it is even more difficult. I was hoping that The Green Cross Code bloke from 1970s children’s TV ads might appear to guide us across, but instead we just had to wait about fifty years for a gap in the traffic. 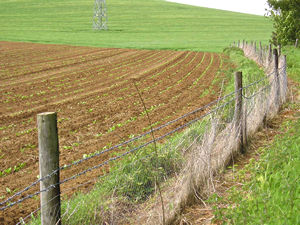 On the other side of the A64, after bearing right slightly, the signposted
walk continues alongside a field on the left, and Gillylees Wood on the
right. This part of the walk isn’t so attractive, and it’s a section you
feel like you want to rush through, to get away from the sounds of the A64
traffic. 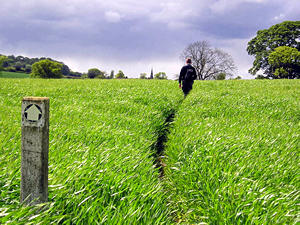 Bearing
left, you follow one of those rather confusing paths that appears to go
right through the middle of someone’s field. Reassuringly, footpath markers
do appear.

On the OS map this area is called Chanting Hill, though as I wasn’t the
map reader, I didn’t realise this until we got back. If I’d known, I might
have tried some chanting. 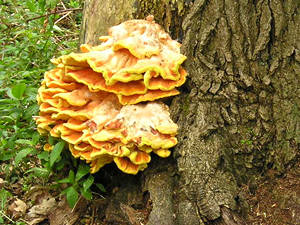 After
a right turn at a path junction, then bearing left where another path crosses,
we continue through Todd Wood. Where enormous orange fungi may grab our
attention. I’m not sure what kind of fungi this is, or whether it’s edible.
I didn’t feel any desire to try a piece. 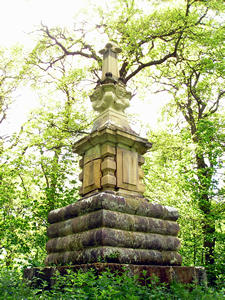 Even more strange and impressive is the Four Faces, just to the right of
the path junction we come to. This area is called Pretty Wood, and indeed
it was.

We are going left, but I had to stop and admire this fabulous monument,
which I hadn’t been expecting at all. I saw ‘Four Faces’ on the map and
thought it was just one of those strange English names for a bit of land,
where the original reason for the name has long been forgotten. But here
indeed are four faces, on a large stone construction.

This is, of course, part of the Castle Howard estate, and a visit to their
website reveals that I was wrong to want to call it a folly, as they call
it a monument. What it’s a monument to, I’ve been unable to find out. 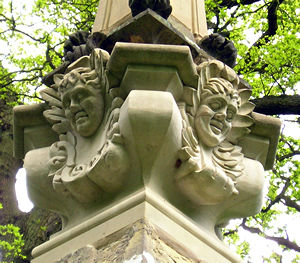 It
had obviously been restored recently, as the original plinth was old and
lichen-covered, while the faces were clean and detailed and clearly only
recently carved. I did at least discover that this restoration took place
between 1997-2003.

This area around Castle Howard is magical, with so many odd little features
like this, and some amazing vistas. For more information, see the Castle
Howard website. 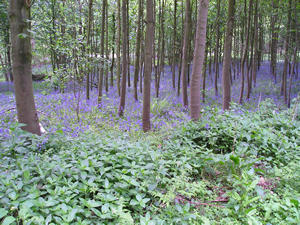 Following the path bearing to the left, we pass the bluebell woods. This
sight was the original aim of our walk, though we’ve seen so many interesting
things already, that I’d forgotten. Lovely though, aren’t they.

Now we’re heading back, and at the edge of the wood, we take a right, down East Moor banks,
and follow a bridleway for some distance, to Welburn. Aside from admiring
an interesting and presumably very wildlife-friendly mixed hedgerow planting
on the left of the path, I was intent on finding somewhere in Welburn where
I could get something to eat, so we walked this section rather quickly,
and I took no photos.