Wharram and the Wolds /1

1 – Abandoned railway to a lost village

This walk took us to Wharram Percy – the famous ‘deserted medieval village’
– via part of an old Victorian railway route, which was also abandoned,
though much more recently, in the twentieth century.

Route details at the foot of the page. 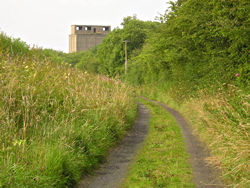 After
leaving the road by what was once the railway station at Wharram, we walked
along the line of the old Malton to Driffield railway. Many old rail lines are now used as cycle routes and footpaths, which is obviously good,
though perhaps it would be even better if they were still used for trains.

This area of former trackbed isn’t surfaced with tarmac. It feels almost as if it’s been left as it was after the last trains travelled here and the lines were taken up. A few unnamed buildings like the one pictured here still stand, decaying, at the sides of the trackbed. (See the Wharram chalk works page for a later revisit, and more on the building pictured.)

This rail line was one of many built in the optimistic era of Victorian
enterprise, and the people who built it no doubt thought it would be here
forever. 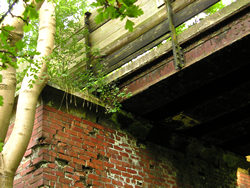 This
bridge is near the entrance to the Wharram Percy medieval village.
Iron and wood rust and weather elegantly above massive brick supports. When
you look at bridges like this you can imagine the trains passing underneath,
a hundred years ago. So much so that they’re rather desolate and sad. I
noticed that I felt a bit spooked as I was standing under the bridge taking
these photos. Abandoned industrial constructions aren’t always the most
cheerful places to be. I’ve no great belief in ghosts, but these places
always feel haunted. Time to move on. 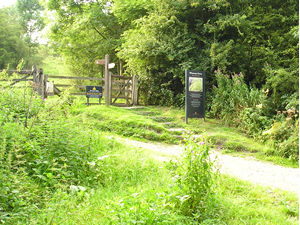 And
just behind us, a scene in complete contrast – all rural and idyllic. The
entrance to Wharram Percy, famous medieval village, now managed by English
Heritage, and studied by archaeologists over the decades. As the village’s
inhabitants left here long ago, I guess this place could feel haunted too,
but it seems so sunny and open and cheerful, by contrast to the decaying
Victorian railway bridge behind us. 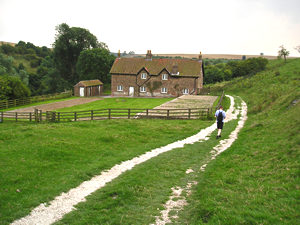 Following
the path we come to this building, which isn’t part of the medieval village
but a later addition. The medieval buildings are long gone.

There are apparently around 3,000 deserted villages in England, abandoned between the 11th and 18th centuries, and Wharram Percy is just one example, but particularly well-known because of the work carried out by archaeologists here since the 1950s. Though the site is known as the ‘medieval village’, excavations have shown an even longer history of occupation.

English Heritage states that ‘excavation has revealed evidence of prehistoric occupation and also of a settlement dating back to the Bronze Age, with Roman farms and an Anglo-Saxon estate coming after.’ 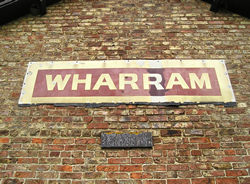 On
the building’s gable end, the sign originally attached to the nearby Wharram railway station. In the 1940s, such signs were removed in case they helped any invading force. (Presumably
the hope was that if there were no signs, the invaders would just wander
around in a confused fashion until they got a bit tired and gave up.)

As I was taking photos here I noticed the swallows – and possibly house
martins too – and then noticed a lot of nests under the eaves of this building.
The birds flew in and out of the nests all the time we were there. 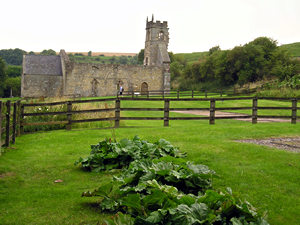 Alongside
some rather confusing outlines in the grass, there’s an obvious church over
there. It is rather splendid, and is shown in more detail on the following
page.

May also be of interest:
Railway
Walks: London and North Eastern Railway
by Jeff Vinter