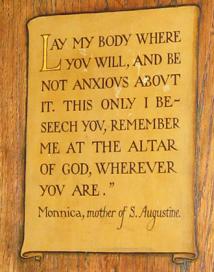 Here’s a detail from a beautiful wooden screen in York Minster, remembering women who gave their lives in war. Moving, isn’t it.

‘Lay my body where you will, and be not anxious about it’

Within our Minster, many lives are remembered, of people whose remains lie elsewhere. They’re remembered in beautiful inscriptions, or by people like me who light a candle in memory of a particular friend.

To me, though I’m not religious, York Minster is a place of peace and calm.

Of late the Minster has been the focus of much attention and much wrangling. As most readers are no doubt aware, there’s a massive campaign to bring the remains of King Richard III here to be buried, after they were removed from under a car park in Leicester.

Originally, the coverage of this was quite good-hearted and amusing. The highlight of the amusing part was a live debate on BBC Radio York, in which representatives from York and Leicester argued their cases. Julia Booth, presenter, made me laugh out loud, gamely entering into the spirit of things with an indignant ‘but you built a car park on top of him’, or similar.

Since then, it’s snowballed into something serious, and it’s not very pleasant to witness, this wrangling over a dead monarch’s bones.

I’m impressed by the work involved, the expertise. It’s a great thing that 21st century archaeological skills have brought this body to the surface and brought his story to a wide audience. But the way York has been pushing itself forward as a better place for the mortal remains has been a bit weird and disturbing.

The word ‘unseemly’ came to mind. Which is odd, as it’s a word I don’t think I’ve ever felt a need to use before. It’s a nice word, rather old-fashioned. Interestingly, when I made an effort to read more press coverage and opinion on the debate I found others also using the world ‘unseemly’.

I had an image of representatives from York like children in a playground, fighting over Richard’s remains, pulling on a leg, saying ‘Mine!’ with Leicester hanging on to an arm, between them pulling his remains to bits.

Of course, he’s already in bits, as he’s a skeleton. But you get my drift.

As this has snowballed it’s dragged into its increasing mass all kinds of outrage and accusation. I think the turning point for me was hearing a spokesman on the radio, probably from one of the tourist organisations, who mustered an impressively vociferous sense of outrage, talking about how ‘Leicester’ had treated Richard III, as if it had happened a couple of weeks ago to a member of his own family.

Suddenly so many are really really bothered. Which is strange, as in all my 40+ years living here I’ve never heard anyone spontaneously mentioning Richard III, and suddenly they’re all wanting to bring him ‘home’ to this city where apparently we all love him, and really care.

Mud-slinging at the Minster 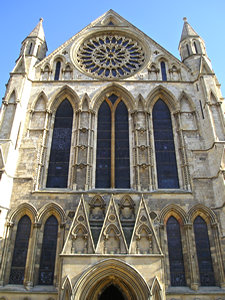 On the website of the local press, comments included a ranting condemnation of ‘our York Minster’ for not fighting for the bones, by someone who blamed the Dean, as ‘he’ had betrayed what the people wanted, etc. Which sums up much of the debate. The Dean is a woman, and anyone really interested in ‘our Minster’ would be aware of that.

When Princess Diana died a loud campaign began to attack HM the Queen for not flying the flag at half-mast at Buckingham Palace. I felt sorry for the Queen for the first time in my life. I’m reminded of that, as the overheated accusations fly, this time aimed at the Minster.

Our Minster is a calm and beautiful place. Leave it alone. Leave it out of your mud-slinging, please.

And if Richard III was brought to York, what then? A load more nasty wrangling over how it should be done, what kind of service it should be, what kind of tomb, where. There would be people wanting some kind of state funeral. The associated arguing doesn’t bear thinking about.

Let’s decide it with jousting

It’s felt at times recently as if the digging up of these bones has unearthed some strange medieval ancestral memory. People I would never have imagined having such reverence for royalty, or for remains, have expressed their desire to see the remains of Richard III brought ‘home’.

A letter today in the press took this to extremes, addressing its questions to the ‘men of York’, like a rousing call to battle. The men of York and Leicester may be jousting in the streets to resolve this, before too long.

A recent letter to the press combined the main elements succinctly. Judith Morris wrote: ‘I appeal to City of York Council, which is always up to make a buck – bring him home. Think of the benefits to tourism.’ There’s the sentimental part about bringing him ‘home’, and the awareness that this would also bring in revenue from increased visitor numbers.

As the bring him home bandwagon has rolled into view recently it’s become embarrassingly overloaded. The leader of the council and the chief executive are suddenly there at the front, and an MEP for the region. Crowds have been demanding that Hugh Bayley and Archbishop Sentamu jump on too.

Where were these petitioners through the long haul of organising the dig and making the arrangements for reburial? I’m sorry York, but I’m embarrassed by this late-in-the-day greedy-looking campaigning. If we were that bothered, why didn’t we do something earlier on?

Does the Minster really need more visitors? And if the claims are true, regarding how much the place meant to him, perhaps that can be highlighted without his remains being buried somewhere in the middle of its floor.

Not far away from the Minster is the Richard III Museum, in Monk Bar. It will no doubt get more visitors because of this debate, and that’s a good thing. It has been championing Richard’s cause for many years.

Other than that, I fear my home city is just looking greedy and a bit crass, making a late-in-the-day grab at the potential income from tourism.

Half hoping that the unseemly wrangle will be solved by the relevant authorities deciding to take the valuable remains to somewhere else entirely, neutral ground. How about Ripon? That’s in Yorkshire, and needs the visitors more than we do.

Letter in The Press, to ‘the men of York’

More letters: ‘Let’s have Richard where he belongs’

More letters, including: ‘Imagine my shock to see only 10,887 people had registered for this. Don’t people in Yorkshire care where their last King is to be buried?’ No, many of us really don’t care.

By Lisa @YorkStories • 13 February 2013 Opinions, thoughts
Tagged  RIII
To link to this page's proper location please use the > permalink