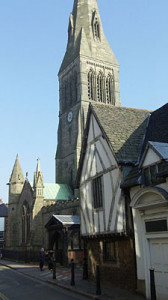 So, Leicester it is then, for Richard III. I thought I should record the court judgement on here, as the ‘battle for the bones’ has been featured many times on these pages in the past, and hopefully this judgement settles the matter.

This morning, at 10am, I was looking at Twitter, listening to Radio York, refreshing the Richard III search results, waiting for the announcement regarding the legal challenge over the planned re-interment in Leicester.

And here we have it:

A reply came swiftly from another distant relative of Richard III who wasn’t part of the Plantagenet Alliance pointing out that not all of those who could be seen as relatives/descendants supported the court action. Some were happy with the arrangements at Leicester.

Which reminds us of just one of the important points in all of this — that there are many many people who are distantly related to King Richard III. Should their views have been canvassed too? And how?

That there was no way of canvassing their opinion or public opinion in general is just one of the points made in the official document: High Court judgement: Plantagenet Alliance v Leicester City Council and others (Richard III burial)

there is no sensible basis for imposing a requirement for a general public consultation, with leaflets, on-line petitions, publicity campaigns, nor for advertisements trying to ascertain who is a relative and then weighing their views against the general public

The Leicester petition to keep the remains in Leicester: 34,477 signatures
The petition calling for a York Minster burial: 31,349 signatures

No evidence of a wish, says the judgement 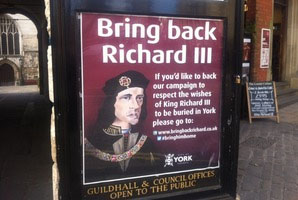 I wanted to include this poster before, but couldn’t find it online. It reappeared this morning on the Minster FM website.

It appeared in the early months of 2013, produced by City of York Council and displayed at the entrance to the Guildhall. It read:

‘If you’d like to back our campaign to respect the wishes of King Richard III to be buried in York please go to …’
followed by a web address for the online petition.

Something so clearly open to interpretation and dispute should never have been presented in this way as fact, by a local authority. It was completely unhelpful and misleading. Because the council said it was true, many people accepted it without question, and who can blame them.

But there’s no evidence, it’s not a ‘fact’. As the judgement published today states:

There was no direct evidence of any definitive wishes expressed by Richard III as to his place of burial, whether on the assumption that he would die in peace after a long reign, or on the assumption that he would lose the battle of Bosworth, and be killed along with his men. In our view, the suggestion that Richard III was to have endowed a chancery at York with 100 chaplains falls short of any definitive or overriding expression of where he wished to be buried.

Our leaders and representatives who should have known better have stirred up a lot of emotion, more heat than light, and sadly Julian Sturdy, MP for York Outer, still is, in today’s Press.

Interesting to see the response in legal terms, made by experts, on rational and legal grounds, in the midst of the mess of opposing views, and strong emotional or perhaps religious/spiritual beliefs. I respect people’s religious/emotional/spiritual feelings and wouldn’t want to cause any offence, but this had to be decided in legal and rational terms, didn’t it. So it was. So the judgement decided in favour of the original plan. Bold emphasis added:

The preferred location accorded with best practice for the reburial of archaeological Christian human remains, namely, the nearest church or churchyard in the same Parish as the Friary.

— that Friary where he was originally buried, more recently known as ‘a car park’. (There are people who seem to think it was a car park in the 15th century and that ‘Leicester buried him under a car park’ as a deliberately disrespectful act.)

One of the interesting details I’ve noticed is the way some of those who have been deeply involved with this dispute have stopped referring to the remains as those of ‘King Richard’ or ‘Richard III’ and now just refer to them by the rather more relaxed and familiar ‘Richard’, like he’s a mate of theirs.

Which leads me on nicely to where I wanted to end up. This morning in the radio broadcast from Leicester Cathedral I was struck by the way one of the speakers was trying to get the focus back to the respectful treatment of these human remains, reminding us that Richard was a man who had died in battle.

And that battle, of course, is part of his story. If he stays there in Leicester, future generations will perhaps be assisted in their understanding of that story. I liked the fact that the legal judgement included mention of the ordinary men who fought with him, and that the cathedral in Leicester is:

close to the battlefield where the men who fought for and with Richard III were killed, and were probably buried.

This reminded me of comment by ‘Chappy1884′ on a story last year on the Leicester Mercury website, a comment I found thought-provoking and quite moving, as it brought the ‘human’ part of this king’s story to life more than other comments I’d read:

‘ … he chose to go into battle in Leicestershire, knowing full well he might end up dead in a bog, and he accepted that risk, and he probably wouldn’t have afforded his successor the same dignity if captured or killed, it’s all conjecture. The last decision he made in his life was to go into battle. That’s all we truly understand.’

So from that decision, through years of quietly being at rest, to an archaeological excavation, to an unseemly mess, to today’s decision, to his soon being laid to rest again not far away from where he was for 500 years.

Struggling to see any good from this

Over the last year, I’ve watched the debate and online wrangling, seen how nasty and personal it has become at times, how much energy so many of us have wasted discussing what should happen. I’ve seen ‘York’ set against ‘Leicester’, I’ve seen racism, and people calling each other ‘bonkers’. It didn’t bring out the best in anyone.

I guess it’s brought income to people who’ve written books about it. Has it achieved anything else?

Personally I wish he had been left at rest where he was.

Comments are welcome if you’d like to point out the positives from all of this, as I can’t see them.

By Lisa @YorkStories • 23 May 2014 Opinions, thoughts
Tagged  RIII
To link to this page's proper location please use the > permalink