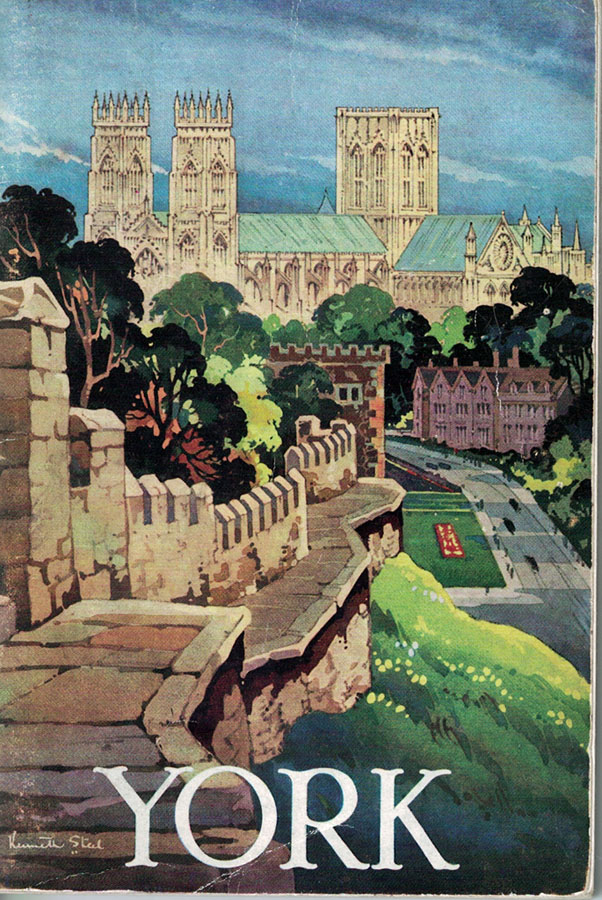 Front cover of the official guide: City and County of the City of York (1961). Illustration by Kenneth Steel.

I’ve recently been perusing an interesting guide to York, bought as part of a small pile of publications from the Barbican Bookshop, in its closing down sale, some years back. As previously mentioned, I found the ‘local interest’ shelves pretty much cleared, but a few little treasures were found. (See ‘related posts’, below, for several of them.)

I’ve wanted to mention this particular guidebook, and feature a few scans of its pages, for some time.

Much of it is the familiar tourist-focused information on the Minster and other famous buildings. But alongside that are many pages illustrating York as it was for people living in the city, the places where residents worked and shopped.

My particular copy was once the property of Moorlands Hotel in Whitby, the stamp in the front suggests. I wonder how and when it ended up tucked away in a corner of a secondhand bookshop in York.

The booklet was published ‘by the Lord Mayor, Aldermen and Citizens of the City of York’. 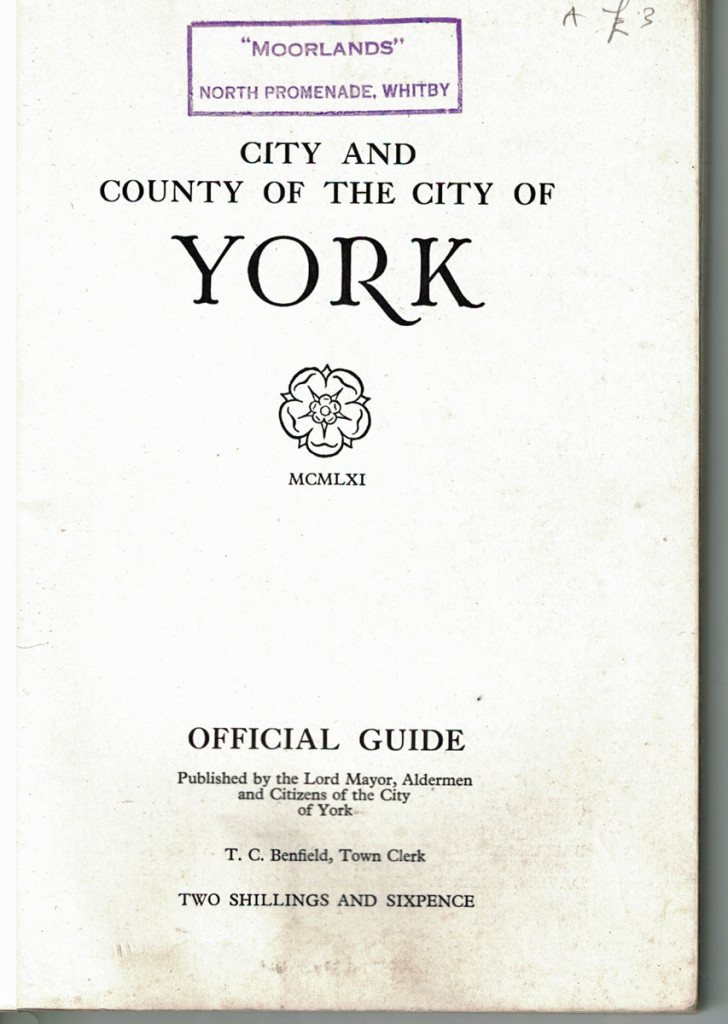 For me, looking at this title page of the booklet, the inclusion of the ‘Citizens’ — and the fact that the word is capitalised — really stands out. Do we use the word ‘citizens’ as often now? Probably not, and perhaps not with this amount of civic pride.

The guide, in its introductory ‘Welcome to York’ page, ends with:

‘This book is not intended for the delectation of visitors only, but also for the men, women and children who dwell within the boundaries of our City.  The citizens of York are proud of their City, and York is proud of its citizens.  No matter where they may roam, those who have lived within the sound of the Minster bells, and have trodden its old streets, never forget the City of their birth or adoption, and for them this book may perhaps bring back happy memories.’

It’s perhaps even more likely to provoke memories now it’s 57 years old, and it certainly gives an insight into the city as it was at the start of the 1960s.

After many pages of the kind of information you’d expect to find in a guide for visitors — the history of the city, and its well-known historic buildings — the subject of page 69 is the University of York, not built at that point, but clearly seen as an exciting and important thing for the city, after government approval in 1960.

‘The university will be built at Heslington, less than a mile from the city walls, on a site of nearly 200 acres which includes Heslington Hall and its grounds.’

This is followed by a page on the city’s library and information service, and several pages on the history and uses of the Ouse, then brief information on the strays (mainly the Knavesmire), and the city’s parks and open spaces. There’s then, rather surprisingly, a ‘French Section’, which is actually just the one page. My French is quite poor but this part stood out:

From the French section of the 1961 guide to York

Ah yes, the wagons de chemin de fer, the chocolat and the instruments optiques. It sounds even more impressive in French.

The reason this is in the French summary section is because this official guide, in 1961, devoted a whole four pages to ‘Commerce and Industry’ (pages 88-91). Featuring, as you might expect, Rowntree and Co Ltd, followed by Joseph Terry and Sons Ltd. But then a reminder that the city’s workforce in the factories didn’t just make chocolate, with a page on the York Carriage and Wagon Works (aka the carriageworks), followed by a page on Cooke, Troughton and Simms Ltd. (Cooke’s factory was at the Haxby Road site where the new mental health facility is to be built.)

1961 York guide: Rowntree and Co and Terry and Sons 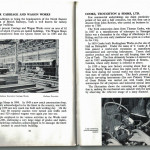 1961 York guide: York Carriage and Wagon Works (aka ‘the carriageworks’) and Cooke, Troughton and Simms Ltd

The advertisements towards the back of the guide remind us too of other places where many York citizens worked, back then.

Examples of Adams Hydraulics ironwork can of course be seen all over York, if you’re paying attention to ground level ironwork (and perhaps in particular, as a 21st century citizen, if you’ve had concerns about silted-up street drains). 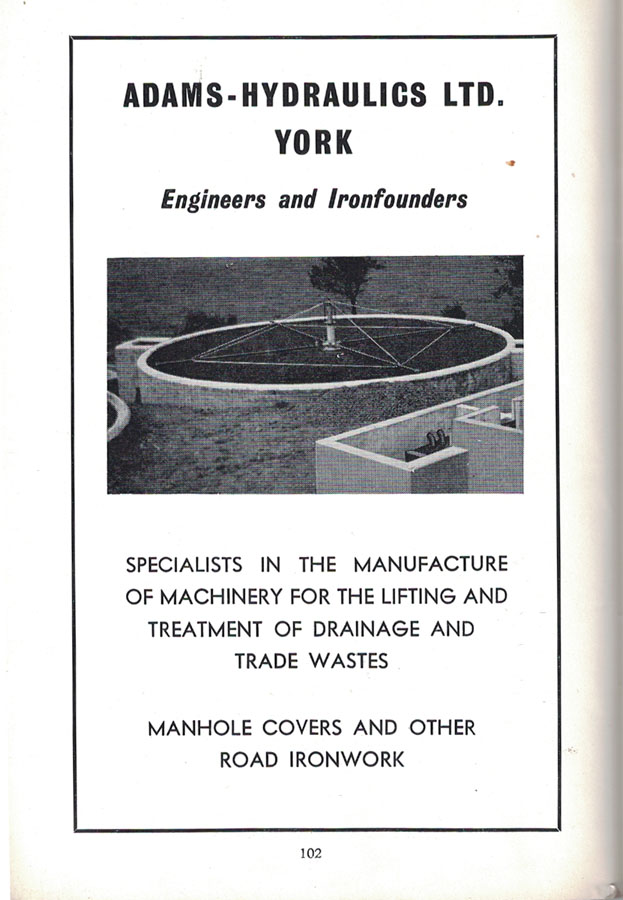 Adams Hydraulics, advert from the 1961 guide

Big buildings advertised by Shepherd’s, including one for the University of Leeds which seems to be still in use (see Google Street View), though it seems less likely that the ‘Boiler House for 52 acre factory’ will have survived. (A quick Google suggests that the building was apparently still standing in 2010.) 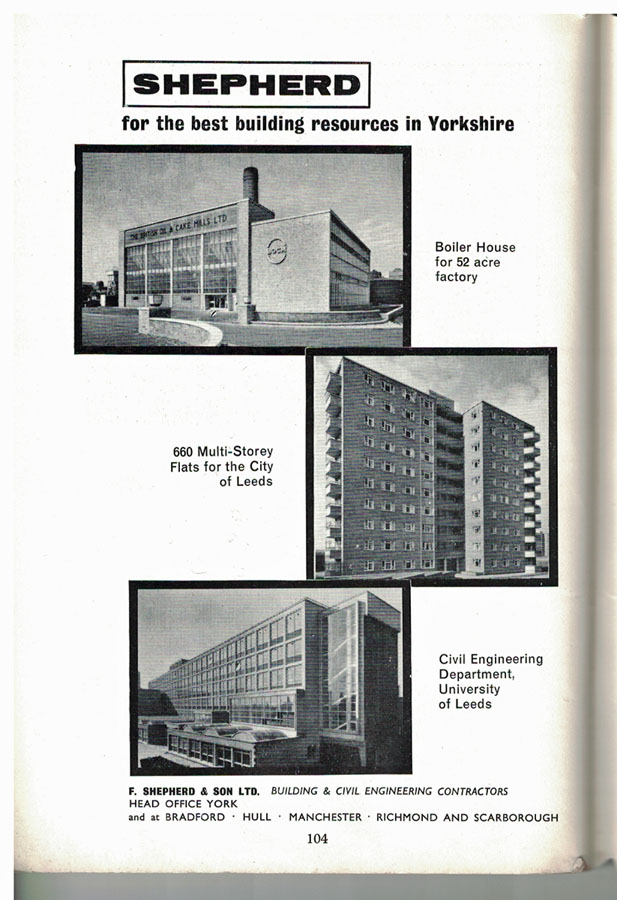 Shepherd, advert from the 1961 guide

And then Shepherd Homes, building family housing out in the expanding suburbs: 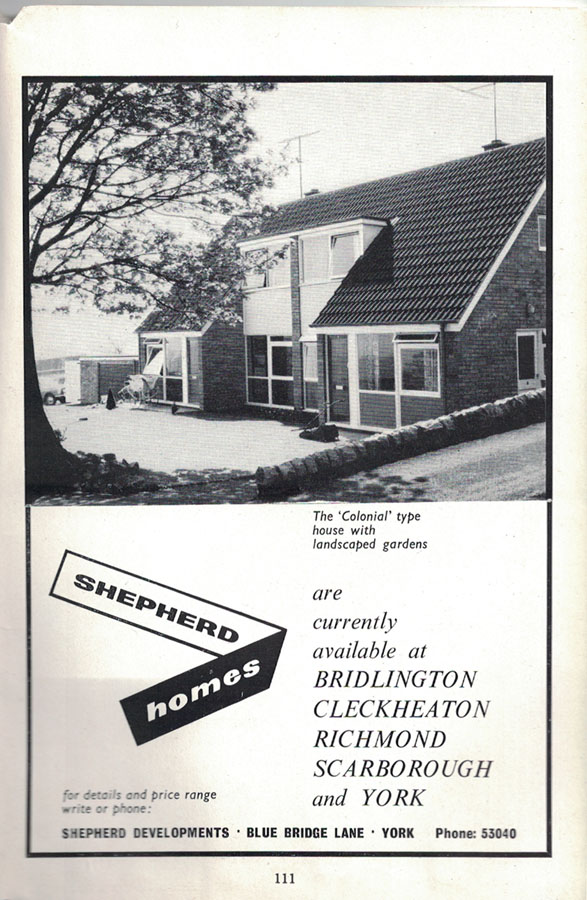 Shepherd Homes, advert from the 1961 guide

From where the citizens of York might have worked and lived, to where they shopped: 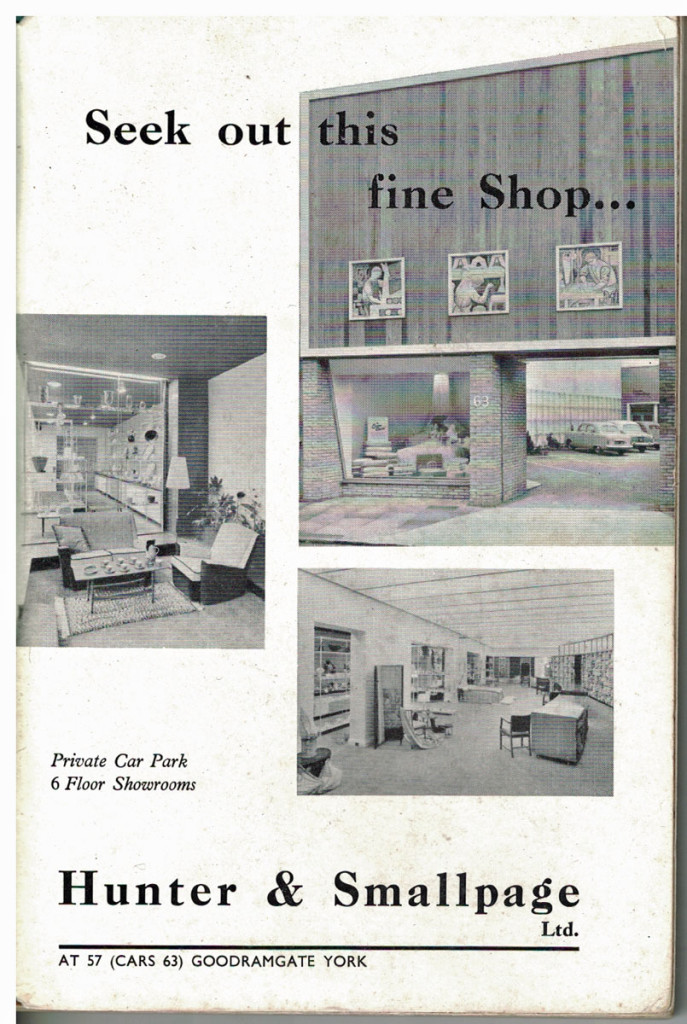 Hunter and Smallpage, Goodramgate, advert from the 1961 guide

Hunter and Smallpage’s advert inside the back cover of the guidebook highlights that the shop had ‘6 floor showrooms’ and its own private car park, which must have been where Café Luca is now.

I remember the name Hunter and Smallpage, but don’t remember a store called Harts. But Harts also advertised in the 1961 guide, with a map showing the locations of various landmarks, including their shop: 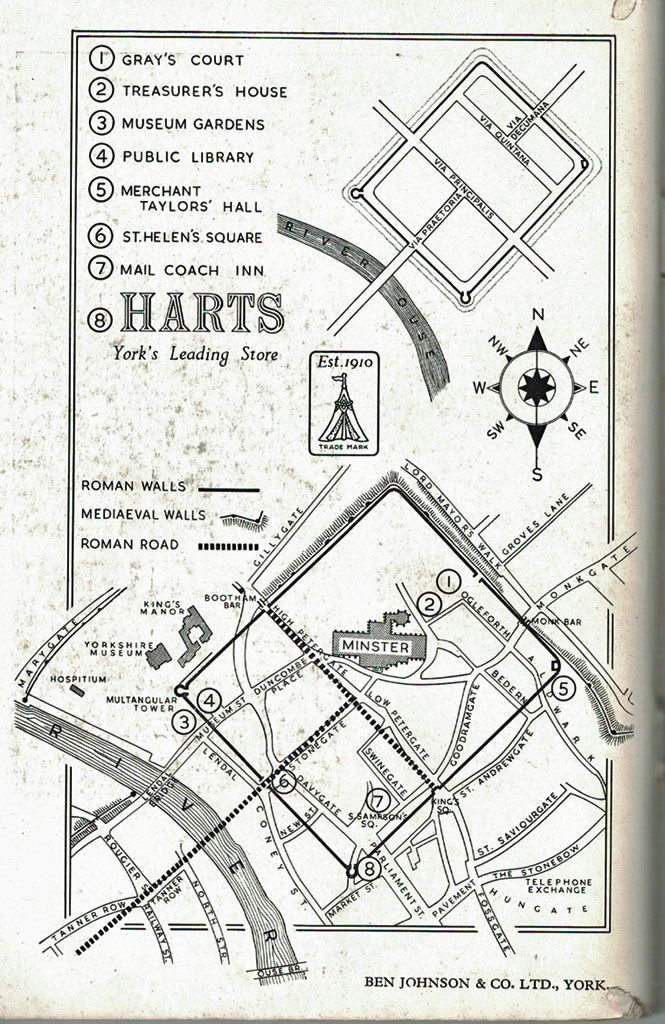 Interesting that the map includes mention of the telephone exchange, which of course at that time would have been a fairly new building, and was clearly seen as a landmark worthy of mention. And in the bottom corner of this page, the last page of the guide, mention of the printer of this official guide to York, in 1961. Printed locally, of course, at Ben Johnson’s, as so many things were, back then.

When I first thought about including this 1961 guide I thought it would be a case of just scanning some of the pages and adding them without too much comment, perhaps no comment at all. But it always ends up being more complicated than that, and several hours on from when I started this ‘quick page’ I find I’ve still not finished, as looking carefully always prompts more questions, and usually more Googling. So I just have to mention the cover illustrations of this lovely guidebook, and the fact that when scanning it I paid more attention to the signature, Kenneth Steel, apparently. The back cover illustration is particularly pleasing. 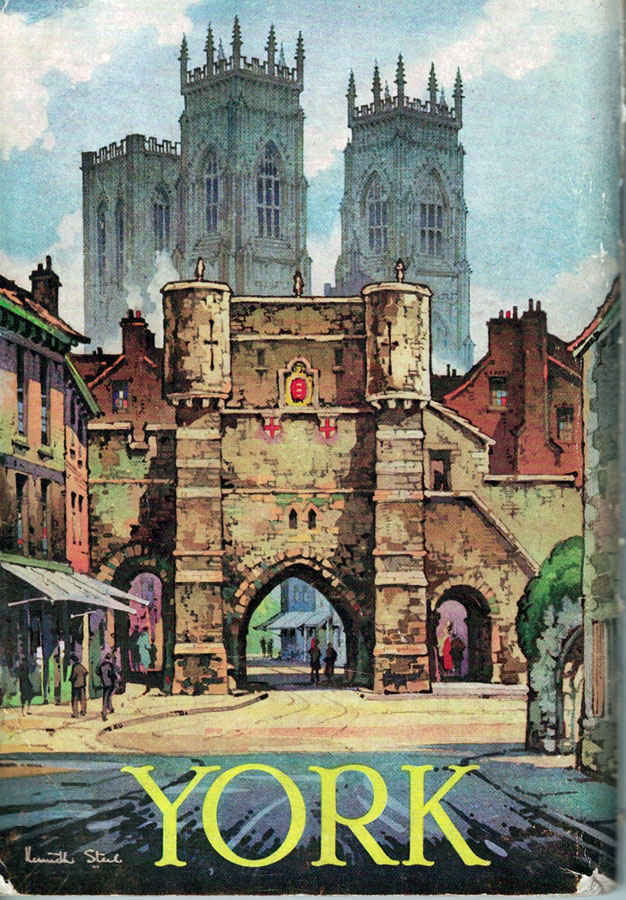 … Gentle nostalgia, sometimes … getting to grips with important current things sometimes … hundreds of pages of all kinds of things here on this citizen’s record of York and its changes. And all without annoying adverts or pop-ups nagging you to join my mailing list (though you can do that on this link if you’d like to), and all proper ‘authentic’, independent, and apparently unique. Looking after this online resource I’ve built up over the years also involves paying website hosting fees every month. If you’d like to say thanks for this online resource, virtual coffees are always appreciated. I continue to add to these pages what I can, when I can. Thanks for your interest and support,
Lisa

Lisa @YorkStories is the creator, administrator, and writer of content on www.yorkstories.co.uk. She can be contacted on this link or via Twitter, @YorkStories
View all posts by Lisa @YorkStories →
Tagged  1960s, carriageworks, shops, Terry's
To link to this page's proper location please use the > permalink