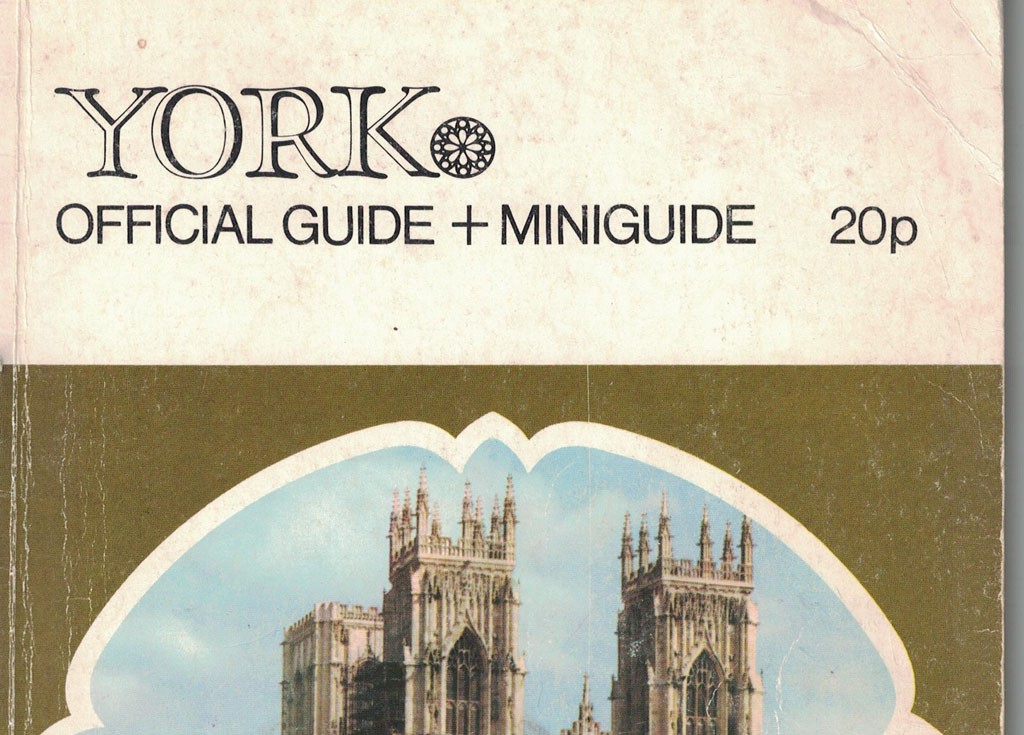 Researching for a piece I’m trying to write led me back to my small collection of York-related booklets and pamphlets. I’ve included parts of a few of them before. Some years back I wrote about an advert for cigarette lighters made from York Minster fragments, from the ‘York Official Guide and Miniguide’, dating from 1971/1972. I picked up the booklet and several other similar publications in the closing down sale at the Barbican Bookshop on Fossgate.

As we’re now in another lockdown, in the middle of a particularly difficult time, I thought I’d share some more of this early 1970s publication with you, dear readers, in case anyone’s in need of some gentle nostalgia, and fancies escaping back to the early 1970s for a while.

The first page of the guide is an advert for Mulberry Hall  which was previously included on this page from 2016. Mulberry Hall appears to have been a regular advertiser in the various updated editions of the York Official Guide, as was this company: 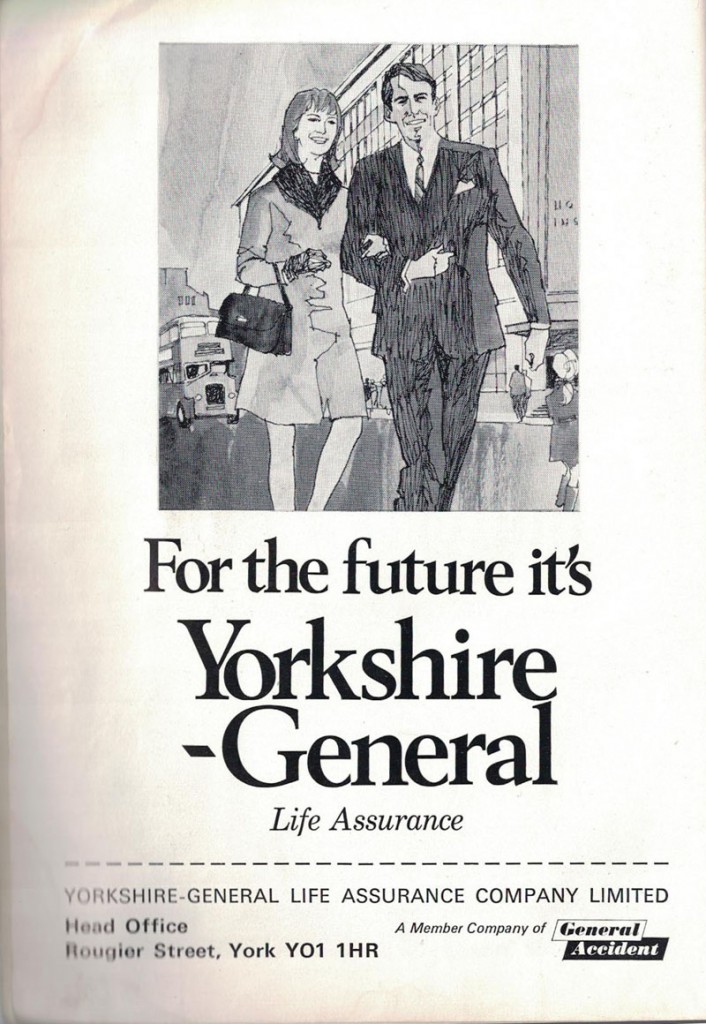 Nice illustration. The smiley couple are in Rougier Street, with the company’s head office in the background, and a groovy old bus. The same illustration, cropped in a slightly different way, has been included previously, on this page about the building. (The building is still there but has recently been converted to a hotel (not a residential development, as had been planned when I wrote that page back in 2016).

Another full page ad, with a suprisingly large amount of white space, advertises “One of England’s lovelier shops”, Hunter and Smallpage, on Goodramgate. 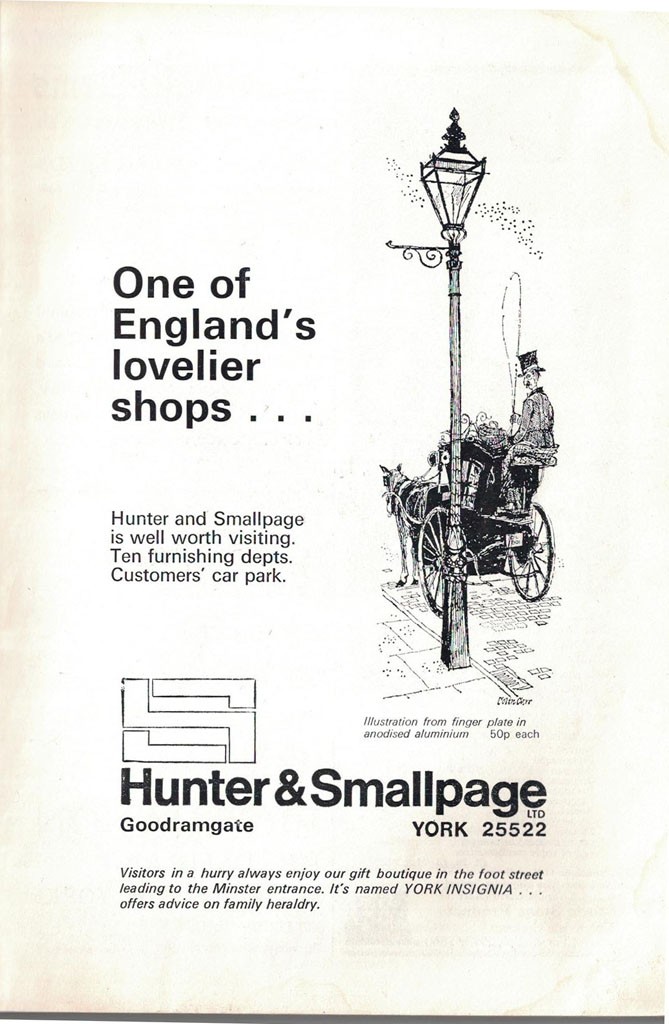 It was a furniture shop, right in the town centre, with its own car park. Imagine that.

More on the shops: 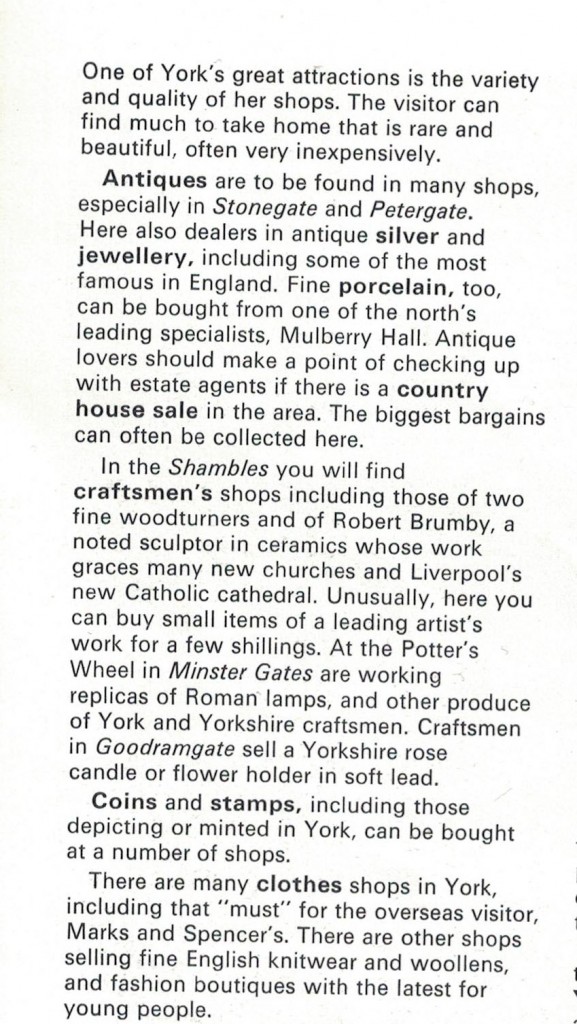 Back then, Marks and Spencer’s was a “must” for the overseas visitor.  And if you were after “exciting and colourful clothes” you might be interested in Vivien Smith Simply Clothes, on Micklegate, which also advertised in the guide book: 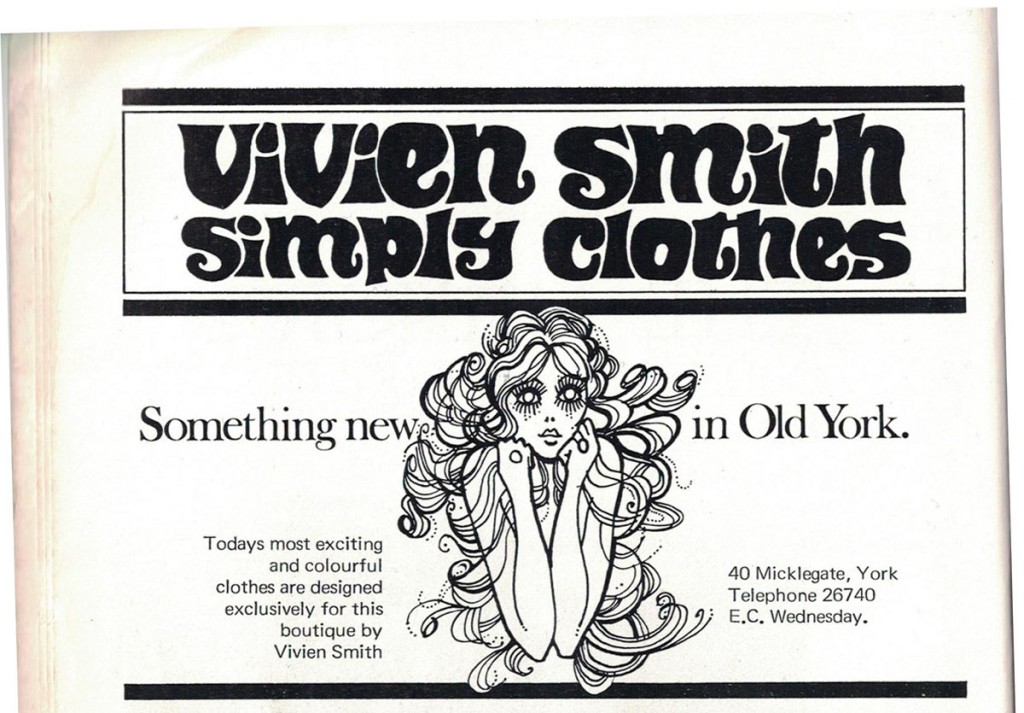 What a groovy advert, very 70s. Big heavy curvy typeface and an expressive illustration of a woman with long hair and dreamy eyes looking a bit bored, and perhaps dreaming of a better future. It promises “Something new in Old York.”

The “E.C. Wednesday” must refer to early closing.

This visitor’s guide includes a brief description of various city centre streets the tourist might want to visit. Of Fossgate it says:

“Little to see” on Fossgate, back then, apart from a few notable buildings.

In recent years Fossgate has clearly become quite a happening kind of place, far busier than it was then, quite a high profile kind of street. Its buildings are much the same as they were then, but used for different purposes, with many popular places to eat and drink.

Many visitors to the city are perhaps now not so focused on what they see, in terms of touring round the famous historic buildings, but equally interested in the vast choice York offers in terms of dining, and drinking.

Quite different back in the early 1970s, as previously highlighted on an earlier page featuring another publication from that time.

The local restaurants and culinary traditions also get a bit of a write-up in this early 1970s York Official Guide – “few provide dishes from the range of great Northern and Yorkshire specialities: black pudding, tripe and onions …” 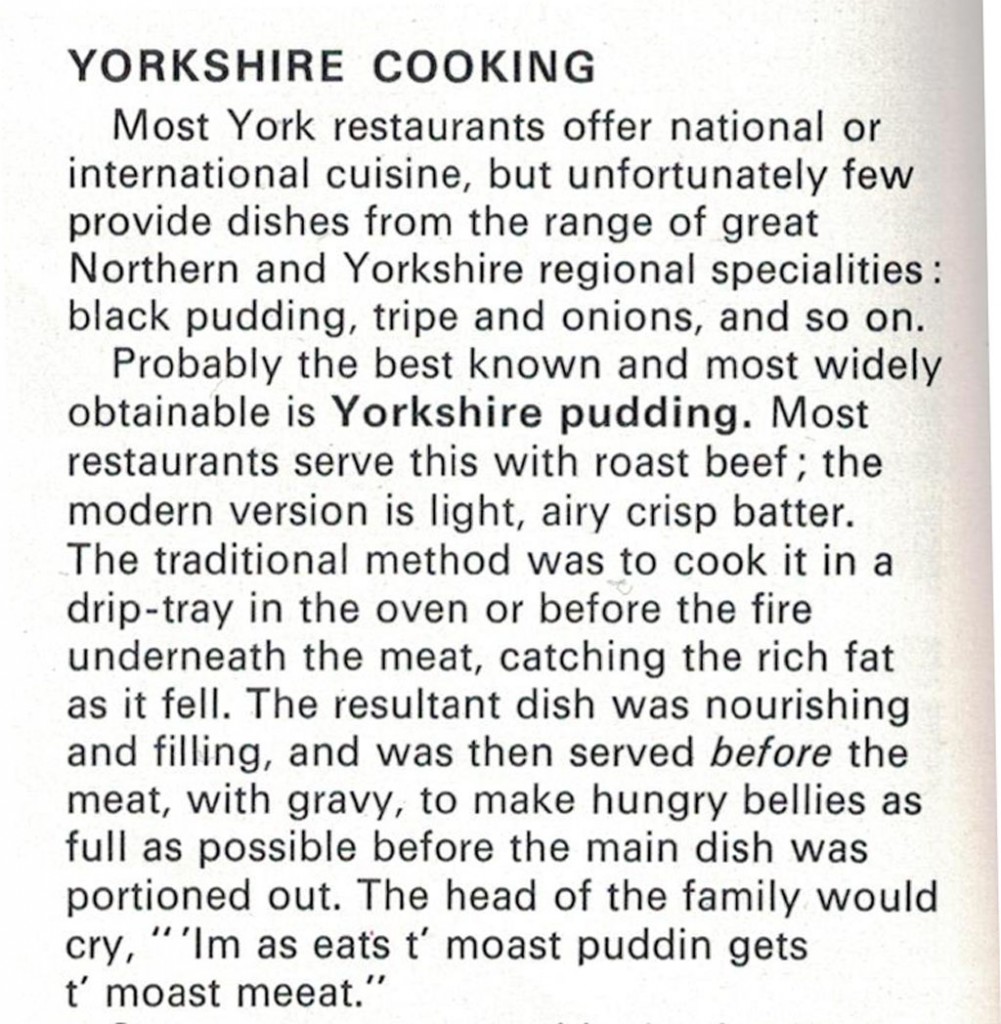 I don’t recall ever hearing the phrase quoted at the end, which was perhaps from much earlier times. At this point, as a child growing up in Acomb, York, I have a vague memory of Yorkshire puddings with golden syrup.

I also have a vague memory of visiting this place, which had a half page ad in the early 1970s guide, and again looks very much of its time: 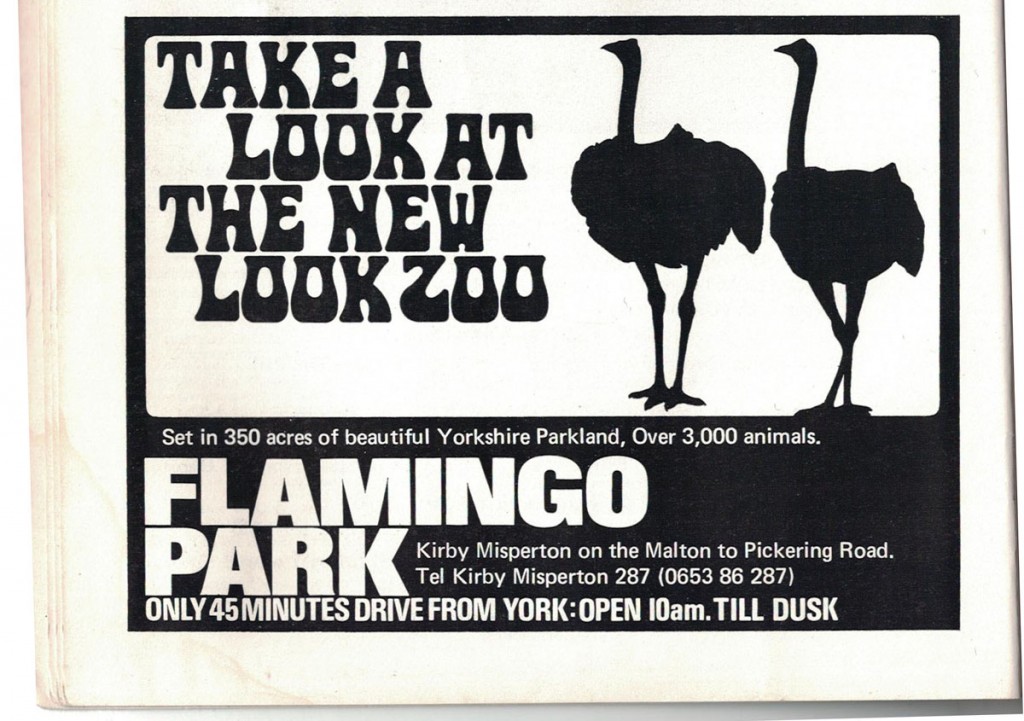 My exploration of this particular early 1970s publication continues, but I’ve got distracted by a bit of historical research prompted by its adverts. More on that story later perhaps.

(Apologies that some of some of the above images are a bit wonky. I thought that they then more authentically conveyed that they’re scans of an actual booklet with pages, which had to be carefully placed on the scanner, as of course one has to be careful with these ancient historical documents …)

If you’d like to look at more from the 1970s, try this link for a selection. Some adverts from an early 1980s York Official Guide can be found on this link. A 1961 York Guide is covered at some length on this page. If you’d like to go back even further, how about When Bettys was Betty’s, and other 1930s ads.

I hope that this has been of interest and offered a brief break from the current times. Thank you to the kind readers who continue to help out with the website hosting fees, and power these pages, with virtual coffees. More about the background to all this is on this page.

Lisa @YorkStories is the creator, administrator, and writer of content on www.yorkstories.co.uk. She can be contacted on this link or via Twitter, @YorkStories
View all posts by Lisa @YorkStories →
Tagged  1970s, shops
To link to this page's proper location please use the > permalink