Gullies and ditches, puddles and floods 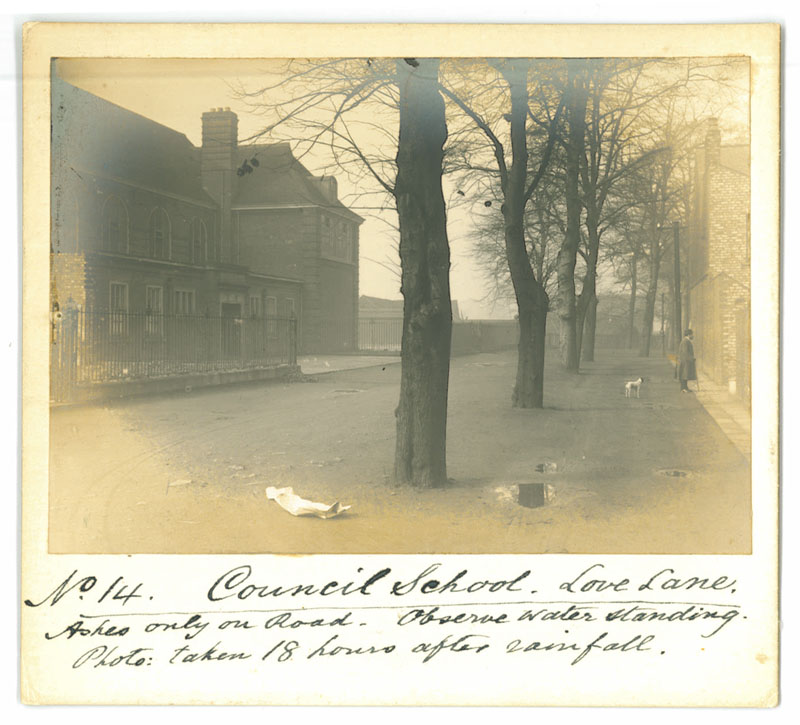 A photo taken around 100 years ago, at the bottom of Queen Anne’s Road, on the line of the ancient lane/snicket in front of what was Queen Anne’s School (now St Olave’s). One of Mr Fairbank’s photos, part of what appears to be a general survey of the state of the roads and pavements. The caption notes that it was taken ’18 hours after rainfall’. We should, he notes, ‘Observe water standing.’

A hundred years later, this weekend, many citizens were to be found observing water standing, in various locations in the city and suburbs, after heavy rain. Whereas Mr Fairbank had to take what I imagine was an enormous camera on a tripod to take his photographs, we have smartphones and Twitter. 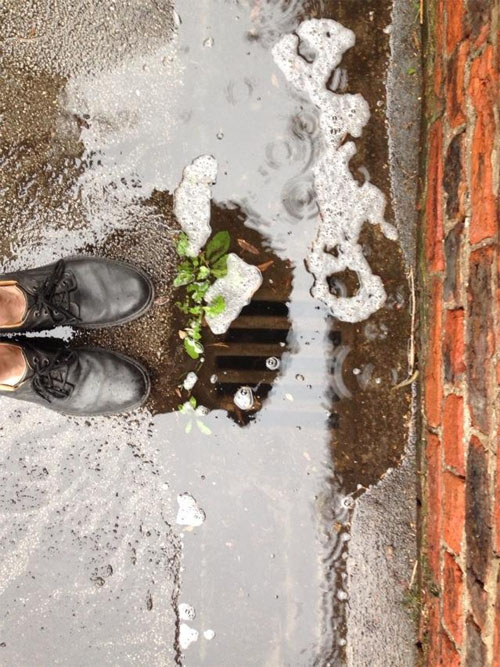 The Press carried dramatic pictures of ‘York’s drains crisis’ — rather large lakes of water, flash floods, in many suburban streets. On a rain-drenched walk through streets off Burton Stone Lane on Friday evening I had to abandon my intended route as a huge puddle covered the road and both pavements:

One of the smaller terraced streets impassable without wellies. Shipton Street looked like it could have ships on it

Extreme weather events can’t be blamed on the council. But blocked drains causing localised flooding perhaps can be. Another story in the Press this week highlighted major cutbacks to the gully cleaning regime, prompting queries over whether the two were connected.

It’s not an exciting subject, on the surface of things, but please don’t leave yet. People of York, look to your gullies. They’re the bits at the edge of the roads, where water collects and slides along towards the drains. Well, that’s the idea. 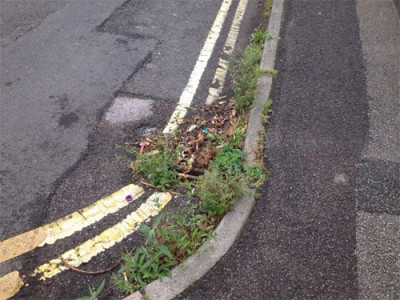 In the Groves. There’s a drain under there somewhere. Photo: Gwen Swinburn

Here’s a photo of a bit of roadside gully and drain. The drain is rather hidden under debris and weeds. This one is in the Groves area of York, but weedy gullies are everywhere, so I’m told. I think most of us don’t pay much attention, until things go wrong. Which is fair enough. We expect the council to look after the gullies and drains in our streets, the part of the system of drainage they’re apparently responsible for.

The flash floods of Friday evening seemed to be another flashpoint in the rather strained relations between many York citizens and the council, as many angry comments on Twitter and elsewhere illustrated.

Would more frequent cleaning make a difference? Would it mean residents weren’t wading through enormous puddles? Here’s part of the report prepared for the council:

Why is it so annoying to read this? Why does it matter if a few drains are blocked?

Because we see an awful lot of money being spent, and many people think it isn’t being spent where it should be. Opinions differ on what’s worthwhile, but a lot of it seems to be wasted. Two words — Lendal Bridge — money down the drain, as the saying goes. Rather than rainwater down the drains, which would be preferable. 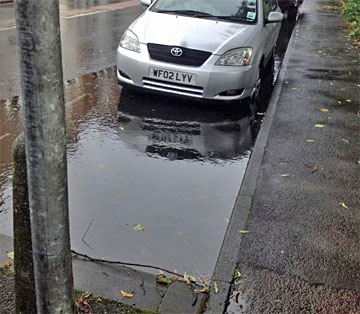 Gully cleaning is clearly quite complicated to organise in many of our residential areas, because parked cars in the terraced streets in particular make access impossible for the council’s cleaning vehicle. They have to give several days notice and prevent anyone parking on the street they need to clean. A cursory glance at the gullies during my walk to the local shop showed that many were full of weeds and litter, and standing water.

So, the street gullies fill with silt, tree debris, litter. As pictured in Gwen’s photo above. And then as the rain comes down it washes it all to the grates, where it sits, blocking them, or goes into the drain, then into the sewers, presumably blocking them eventually, as many of them are old and fractured and have tree roots partially blocking them already.

Or that’s my understanding. I’m not an expert on these matters. If you are, please add a comment.

This staring at drains has reminded me of numerous references in the archives to the need to ‘scour the ditches’, a phrase I rather like, though I’m not entirely sure what it involved, as I’ve never had to look after a watercourse. But I imagine that scouring the ditches in days of old was a precursor to cleaning the gulleys. Here’s a snippet of an 18th century book of rules on ditch-scouring and other things, turned up by a quick Google, as after all this boring drains talk we’re in need of the kind of mild amusement these old documents provide:

There are many references to ditch-scouring in the Quarter Sessions for York in the 17th century. In the summer of 1650 several people were in trouble for ‘not scouring ditches towards the lanes leading to the City’ (‘4 persons from Holgate & Acomb’ get particular mention) or ‘for not scouring a water-sewer in the Bishopfields’.

Perhaps we all need to muck in again, like we did back then, before ‘the Corporation’ and City of York Council took over responsibility for such things.

Over the weekend I was walking through St John’s Street in the Groves, where the gullies were particularly clogged. A great pile of debris and litter and silt surrounded the grate at the end of the street. Someone had clearly intervened, a little, and dragged some of it away from the grate. But then left it there. So that yesterday, when it rained again, it would have been washed back to where it was, or down the drain.

Perhaps one of the residents of the street, maybe a couple of residents working together, could have got a broom and shovel and cleaned it up properly? Would have only taken a few minutes. Maybe we should all be doing that, if we notice a problem? It’s made me wonder if I should. Seems it might be quicker and more efficient than reporting it to the council via smartphone/website and then waiting however long for them to get around to it in their ‘reactive cleaning’.

But the usual answer is that we pay our council tax for the council to do it.

The city council take a lot of money from us in council tax, and we see how many thousands of pounds they spend/waste, and we think about how hard we work to make a fraction of that to pay the rent/mortgage/bills, and then we have to wade through water or turn round and go the longer way home because of blocked drains, and we wonder if those drains are perhaps blocked because instead of spending money on the things that would make our lives easier they’re spending our money on crap we didn’t want in the first place, or on badly realised visitor-focused ‘visions’, as in the Lendal Bridge cock-up, which ended up wasting obscene amounts of money.

Is that a fair summary of some of the public feeling?

Comments welcome. Will you be helping out the council by ‘scouring the ditches’/cleaning your street gullies?

Or perhaps by doing a bit of weeding. More on that story later.