I made a special effort to ‘get on my bike’ and get up there earlier in the day than I’ve usually been passing, in the hope that I could get a reasonably decent photo or two. Previous efforts have been hampered by the sun being in the wrong place. 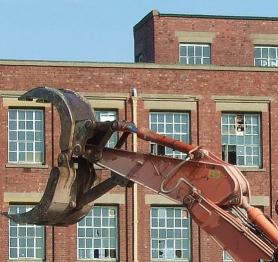 The more modern additions to the site – later 20th century I guess – are being demolished, while the handsome early 20th century buildings of the original Terry’s factory are being retained. There’s a fair bit of ‘misinformation’ out there about this – “Terry’s factory site being demolished”. As it’s no longer a factory it would be pointless to keep a load of the modern additions, which no longer have a purpose. Neither do those red-brick buildings, but as we’ve in recent years developed some appreciation of our industrial heritage (having already demolished so much of it, in York), the ‘red brick’ buildings on this site are being preserved.

These photos may end up on a page in the ‘Buildings’ section, with more text added (including perhaps any comments you want to add below) but for now 9 photos have been uploaded to my flickr.com photos.

Things lost and how we feel about it (Terry’s factory)

Lisa @YorkStories is the creator, administrator, and writer of content on www.yorkstories.co.uk. She can be contacted on this link or via Twitter, @YorkStories
View all posts by Lisa @YorkStories →
Tagged  demolition, factories, Terry's
To link to this page's proper location please use the > permalink