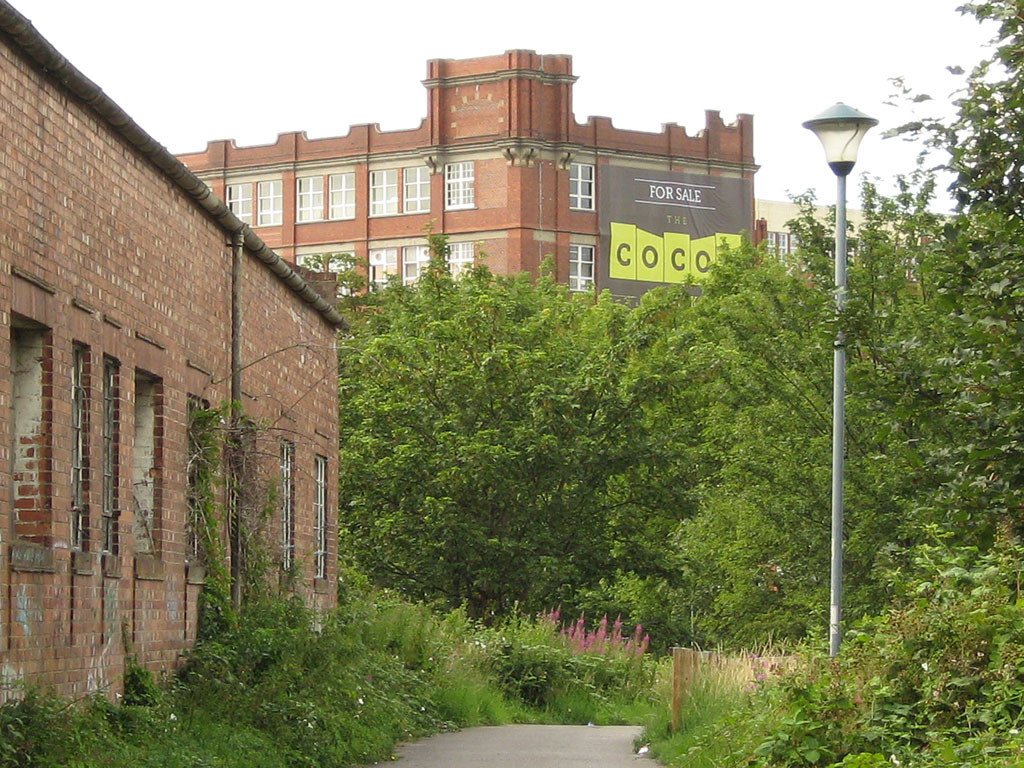 On Tuesday (24 January) I received an email invitation to an exhibition of plans for the old Rowntree factory buildings. The plans were to be displayed in the Joseph Rowntree Memorial Library in front of the factory, for one day only, that afternoon and evening.

This page includes some information from that event, from the display boards, as I know that many people who would have been interested didn’t know about it. And it needs to be widely known about, I reckon. Even more important than the Terry’s development, I reckon. Some personal opinions follow. Feel free to add your own, in the comments. 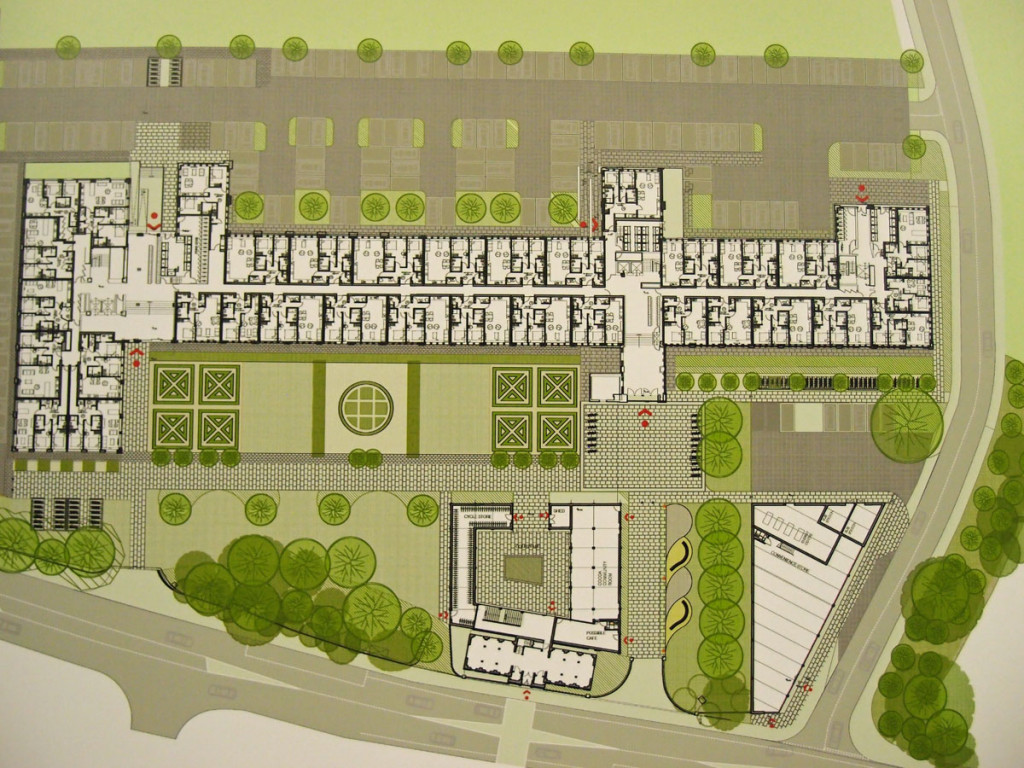 Plans for the Cocoa Works: redevelopment of Rowntree factory buildings

I was pleased to be inside the Joseph Rowntree Memorial Library. More on that story later.

I really wasn’t pleased to see this proposal on how the building behind it might look: 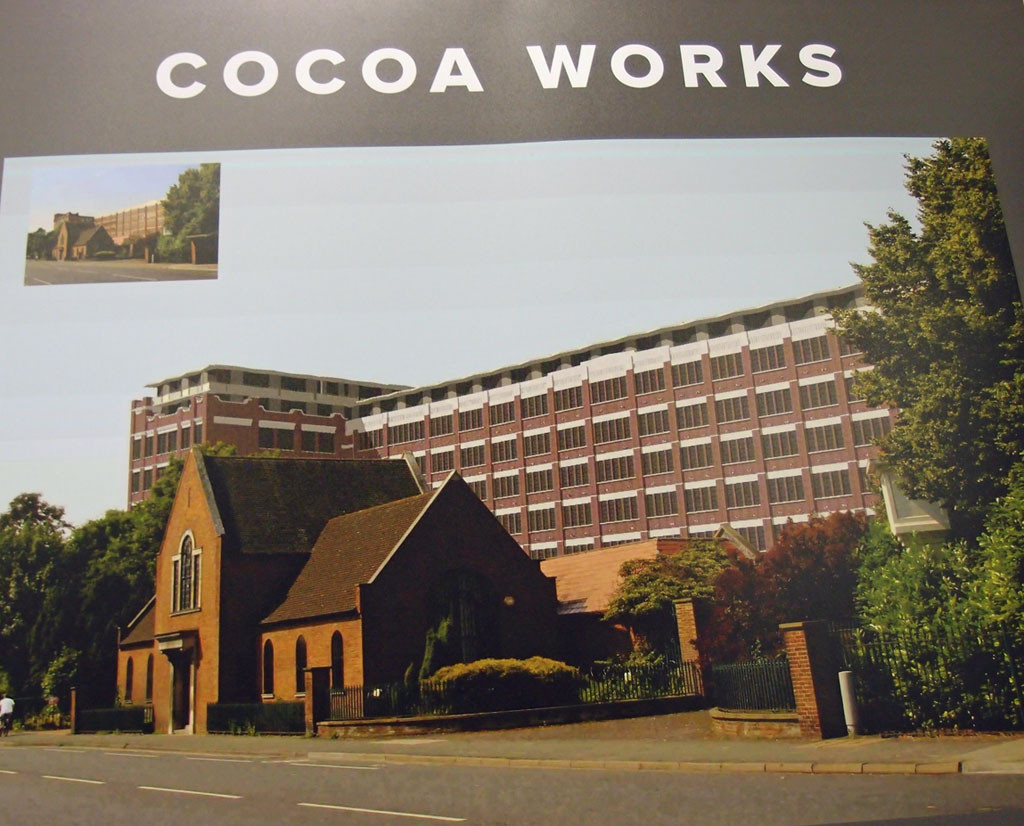 Proposed extra bit on top of the factory buildings

Note the addition, above the original parapet.

This is a massive factory building. This illustration shows an extra floor added, and I really don’t know what to say. These days I don’t tend to fling terms like ‘greedy developers’ into my pages. But I don’t know how else to react to this.

It ruins the building, looks cheap. It looks like a load of sheds, or holiday chalets, plonked on the top, to maximise profit. Six floors already I think? Is that not enough?

Here’s another view of how those cheeky sheds/chalets might look, from the southern approach (from town, heading out of town), again from the display boards: 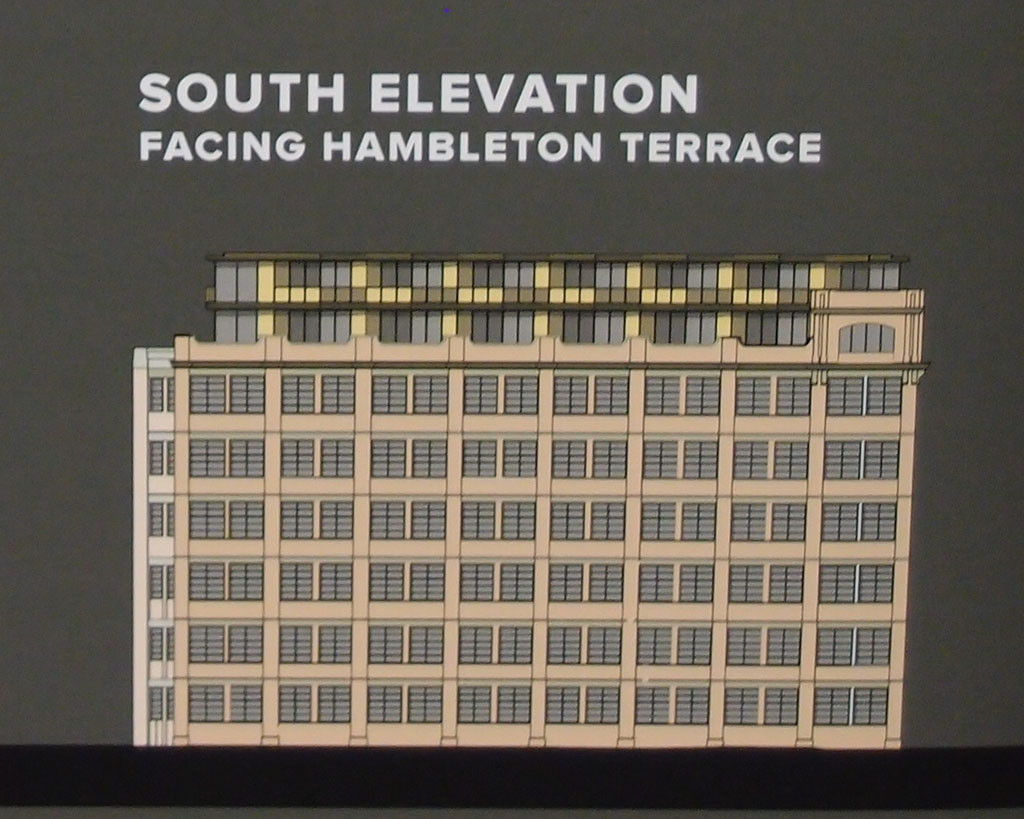 Additions proposed on the top of the Rowntree factory buildings

The remaining factory buildings are in general quite plain and functional. The sheer bulk of what’s left is still impressive, but the really impressive bit is the corner you see when approaching from town, heading out on Haxby Road. Or from the cycle track below, where its proud corner is seen to best advantage. The former route of the railway line that used to link to the factory.

The former Rowntree factory still towers proud above it. If you know the local landscape and its history it’s full of significance. Full of meaning and memory, collective York memory.

Imagine that photo above with the shed-like/chalet thing sticking up above it.

If the proposals go ahead I’ll look the other way when cycling or walking past it, and not be able to look up at it with fondness and York-based understanding and pride, as I do now.

Does that matter? Maybe not, if the main need is to maximise profit/cram as many people into it as possible. But is that where we’ve got to? The limit of our aspirations?

It takes years to understand the place, get to know its meanings, what things stand for, why they’re important. I’m still learning, we all are.

But in the end it probably doesn’t matter what we know or don’t, as it’s all about the money, profit.

I’ve tried to be tolerant and accepting of inevitable change, but this goes beyond my limits of tolerance. I hope that we’ll all oppose the imposing of a tasteless extra layer on this important landmark building.

I’m not sure about a campaign slogan. ‘Fight the chalets’/’Oppose the sheds’?

Road … only for buses?

The proposals include a new road, cutting through across the site between Wigginton Road and Haxby Road, alongside the retained factory buildings. I’m not a car driver, but I know how horrendously congested Wigginton Road is, around the Crichton Ave junction in particular. So a road through to relieve some of that, so that all the cars aren’t heading for the fork where Haxby Road and Wigginton Road meet, the junction in front of Groves Chapel, what a great opportunity to disperse some of that traffic, in a more logical way.

But it seems this new road is just for buses. It seems to have some bollard thing in the middle preventing it being used as a link road between Wigginton Road and Haxby Road.

Whereas my impression is that a link road to relieve the traffic on Wigginton Road is exactly what we need in this area, and that to build a road and then not let most people use it is really quite illogical.

I’m baffled about this. Perhaps someone else can add more info on why a road is being constructed at great expense just for buses to use. What a waste.

But then, this current scheme can only build half of the road anyway, as Newby have only half the site.

To put this site into its wider context, again with an image from the display boards, the red boundary line shows the site in question: 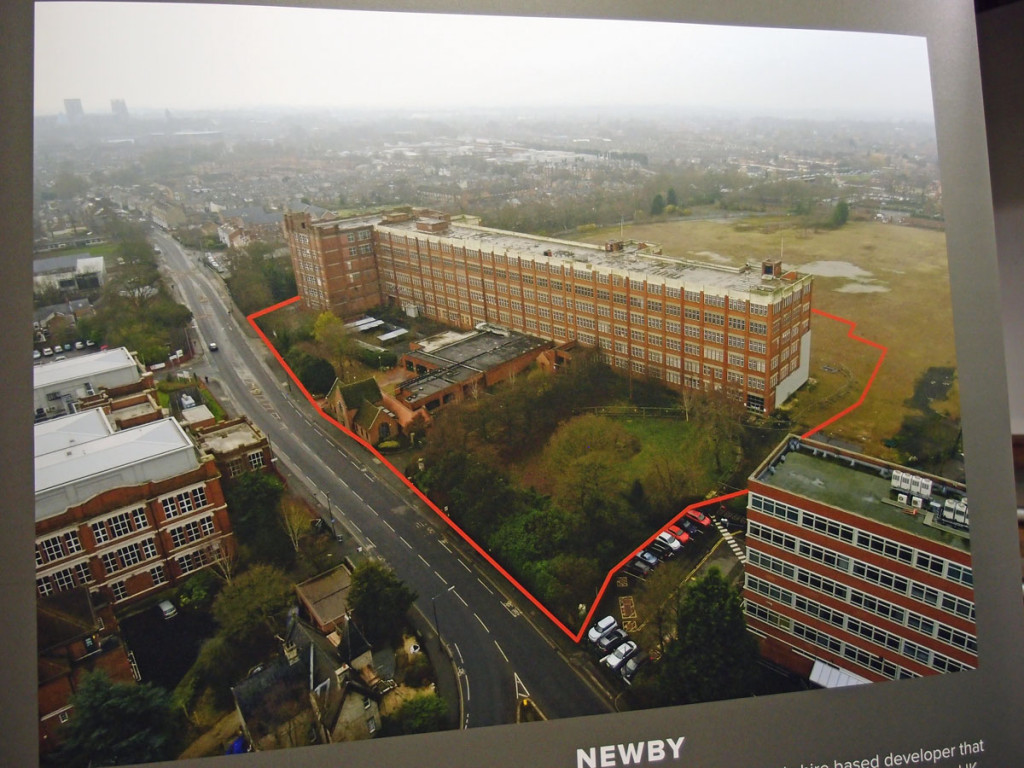 It’s part of the Nestle South site, not all of it. Behind it is a large area where many of the old Rowntree factory buildings were cleared, some years ago. The site we’re looking at on this page is the most impressive part, fronting on to Haxby Road. The main factory buildings, with the Joseph Rowntree Memorial Library in front, and trees and garden areas. 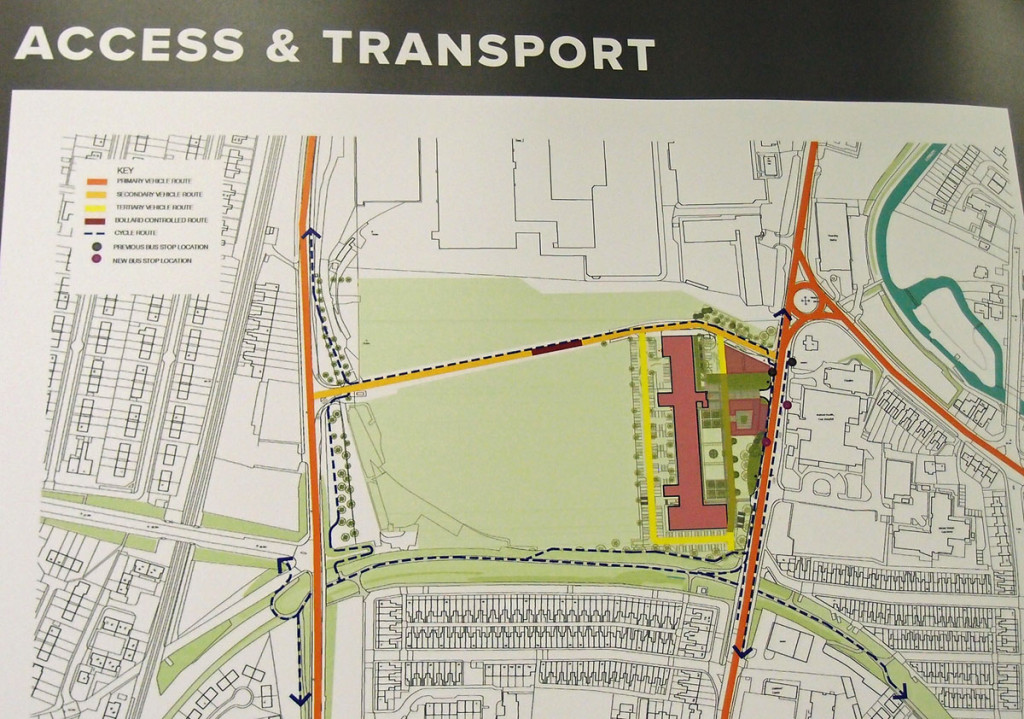 The plans show a convenience store at the edge of the site, on the corner of the new road where it meets Haxby Road. It’s the strange triangular shape on the image above. If it was a Co-op that would be great, as we don’t have a Co-op on this side of town. But it will probably end up being something disappointing like a Spar.

Well, it was nice to be in the library, and I ended up taking more photos of it than I did of the display boards. As the library is a listed building it will be part of the plans, but from information available it seems likely it might end up being some kind of concierge thing for the accommodation in the factory buildings behind. So not very inspiring really, for a building erected in gratitude for the life of Joseph Rowntree. But the owners can do what they like with it. They could try to be true to the spirit of the Joseph Rowntree Memorial Library, understand and respect the place, be philanthropic, be visionary, thoughtful … or they could just turn it into a place for the people in the flats to collect parcels. 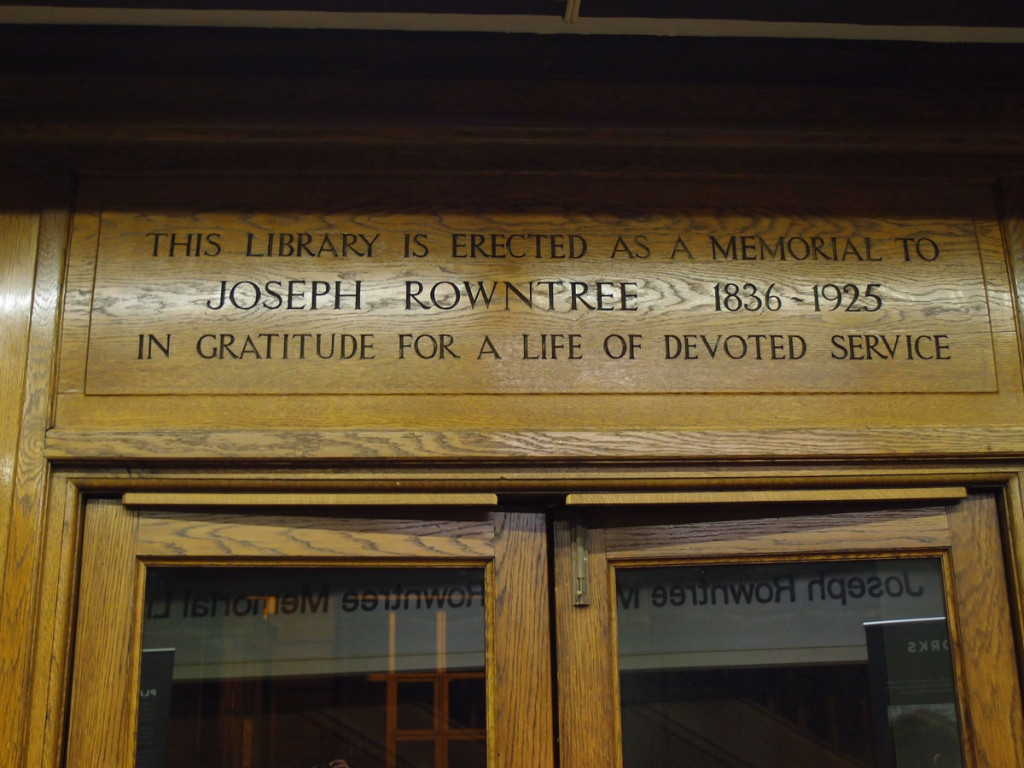 I couldn’t find any more information online about the exhibition of these plans. I asked about this, and was sent the leaflet distributed to local residents, which I shared on Twitter, within hours of receiving it, but too late for many people to get to the exhibition.

Apparently it had also been advertised in the Press, but despite searching, I couldn’t find the information on the Press website.

Below is a copy of the questionnaire/survey I picked up from the event. (Which I had to scan, convert to PDF, and upload. Medal please …)

I don’t need a medal really. Just please, people of York, people of anywhere, stop the chalets on the roof.

The PDF should give you some idea of what the ‘consultation’ event asked for responses on, and you can see in due course if they took any notice.

You can also email responses to enquiries@oneill-associates.co.uk by 3 February 2017. If you do so, I suggest you put ‘Cocoa Works plans’ in the subject line and ask for an acknowledgement that your views will be noted.

Too large and complex a scheme to cover adequately in one page. It’s taken many hours already but it needs returning to later.

If you’d like to be kept informed of new additions to this site please join the mailing list.
It’s quite frustrating that people like me have to fill in the gaps, try to get info out there. I don’t get paid for doing this. Please have a look at supporting this site in 2017.

Lisa @YorkStories is the creator, administrator, and writer of content on www.yorkstories.co.uk. She can be contacted on this link or via Twitter, @YorkStories
View all posts by Lisa @YorkStories →
Tagged  factories, Rowntree
To link to this page's proper location please use the > permalink