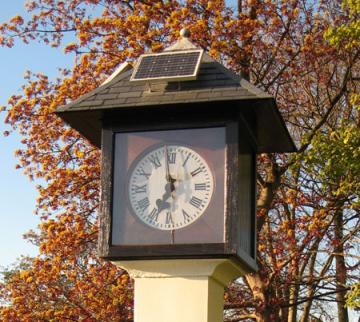 The Rowntree factory clock on Wigginton Road, fitted with a solar panel since its earlier appearance on these pages. Attention was drawn to these clocks after they were manually adjusted to just after 8 o’clock to celebrate the history of a particular line of confectionery once manufactured here.

After a brief spell during which the clock mechanisms disappeared, they’re now all back in place, all running on solar power, and are keeping time like they used to when they were properly useful, next to the factory gates.

There are two similar clocks near the Haxby Road ‘main entrance’, also now with solar panels on top.

And they’re still keeping time, weeks/months after being adapted to use solar power.

There’s no need, these days, for factory clocks and no real need for public clocks of any kind. No real need for any timepiece in the traditional form, for most of us, carrying a mobile phone. But we value things not just because we need them personally, to go about our daily lives, but because of a symbolic value beyond the immediate usefulness.

So Nestlé have invested in the future usefulness/symbolism of these old factory clocks, and they’re skilfully updated for the 21st century. Respect due to them and those who did the work involved. (Feel free to comment below if you were involved in this work.)

These clocks are quite humble, homely things. You have to look upwards to read them, but they don’t appear on the horizon and they’re not visible unless you’re in the street near them. 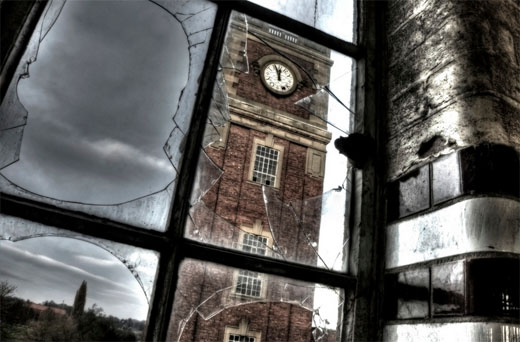 Whereas our other chocolate factory clock is a landmark. Terry’s of York – photo by Trev Pack, on flickr.com. Trev’s photo, taken from inside one of the factory buildings, captures two significant aspects in one photo – the clock tower, and the increasing dereliction of these old Terry’s factory buildings. 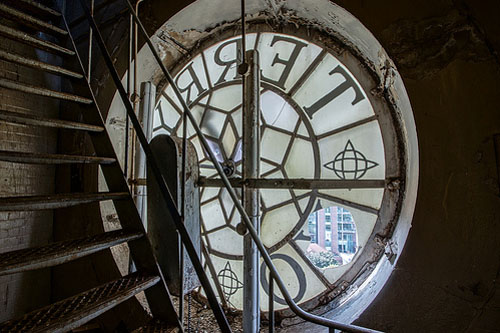 Photo by Kopex, on flickr.com. Taken from inside the tower, showing the damage to one of the clock faces from inside.

The Terry’s clock tower is often called ‘iconic’ – a landmark in its part of York. Being iconic/a landmark perhaps also means being the target for more bricks being thrown at the clock faces, and at the rest of the building. Whatever the cause, accidental or deliberate, it has certainly sustained some damage since the factory closed. 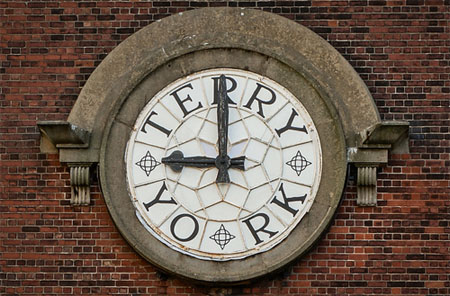 (Photo: Kopex) In recent months the sale and imminent development of the Terry’s site was announced. This isn’t the first time, and nothing has changed in real terms as yet as far as I’m aware. When work starts, it will begin with the building of new homes on the empty parts of the large factory site. When refurbishment of the factory building and its clock tower will begin — well, time will tell.

It will be a while before the Terry’s clock keeps time again. When it does, perhaps it too will be fitted with a solar panel, to harness natural power to turn the hands. For now it bides its time, a relic of York’s industrial past, a reminder that the times it was designed to mark are long gone.

All three clocks at Rowntree’s were pictured in an earlier page: Time after time

50th anniversary of After Eight mints celebrated at Nestlé

More photos on flickr.com of the Terry’s factory buildings by Kopex and Trev Pack

And a recommended read: Vandals breach security at former Terry’s chocolate factory (York Press).
The Terry’s photos above were taken by people documenting this building and its history in their own way, with a camera. That this involved trespassing is not my concern. I’m glad to see the place recorded and the images freely shared. Otherwise most of us would never see inside these buildings. Whereas breaking into a building to damage its fabric and spray graffiti on its walls is vandalism. Two different things, as the comments under the linked Press story make clear. I particularly liked the comment by VladSchmidt at 11.08am.

By Lisa @YorkStories • 9 May 2013 Details
Tagged  clocks, factories, Rowntree, Terry's
To link to this page's proper location please use the > permalink