So, I’m sure everyone’s dying to know the other results of the Stonebow survey not yet covered. Here are some bar charts. 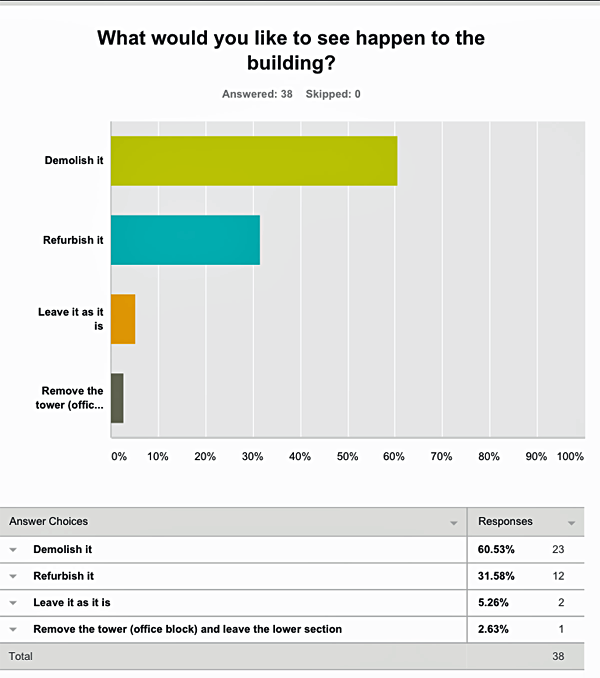 Asking what people would like to see happen to the building — the results aren’t surprising, in that coming out top is ‘Demolish it’. We have always known that many people hate it, and the present administration would probably love it to be dramatically demolished while they’re still in control of the city, to increase their ailing popularity before the elections in May. I can imagine the conversations that might have taken place. ‘They’re really angry and sound like they hate us! What can we do? They won’t even let us knock down that old tram shed without moaning about it! There must be something we can do that would be universally popular?’ Then looks of recognition and realisation, and someone says ‘Stonebow House!’, and they all rush into their control room where there’s a massive map of York, beamed onto a huge screen from James Alexander’s iPad, and he starts pointing at it with a long stick, and they plan their campaign.

So, moving on to the other answers that SurveyMonkey helpfully turned into graphs and percentages. 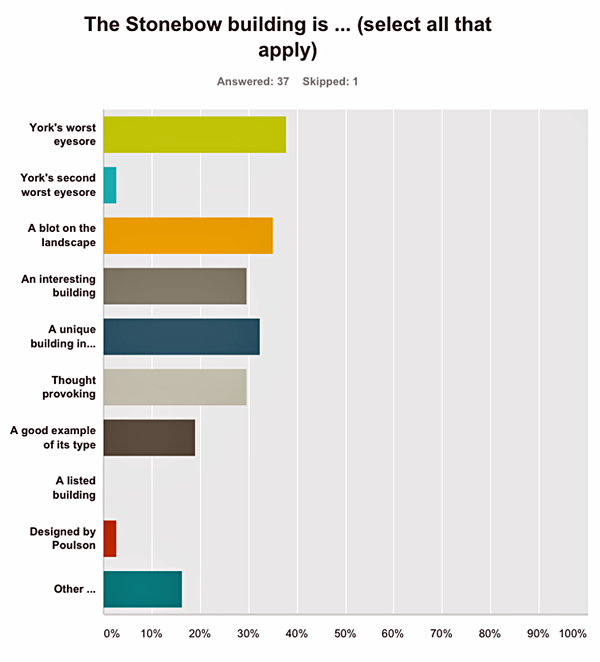 These answers are more interesting in a way, as this was a ‘tick all that apply’ question, and it reflected better perhaps the ambivalent feelings many of us have about the building. So people selected ‘a blot on the landscape’ but also ‘an interesting building’, or ‘thought provoking building’ for example.

37.84% think it’s ‘York’s worst eyesore’, which is perhaps not as high as we’d expect. Reading other comments elsewhere you’d think that absolutely everyone in York thinks it is.

No one who answered thinks it’s a listed building — hurrah, the myth-challenging is working. (But one person thought it was designed by Poulson. As the earlier page also mentions, it isn’t, that myth needs tackling too.)

Some of the comments left under ‘other’ were included on the earlier page (and also passed on to the Living with History project, as previously mentioned). Two of the six ‘other’ comments cited the Ryedale building on Piccadilly as more of an eyesore than Stonebow House.

In the ‘which of these have you visited’ question I just included every venue or business or organisation I knew of that occupies Stonebow House or did in the past. Not surprising that the ‘most visited’ in the results is Fibbers, with the Duchess, the other music venue, not far behind: 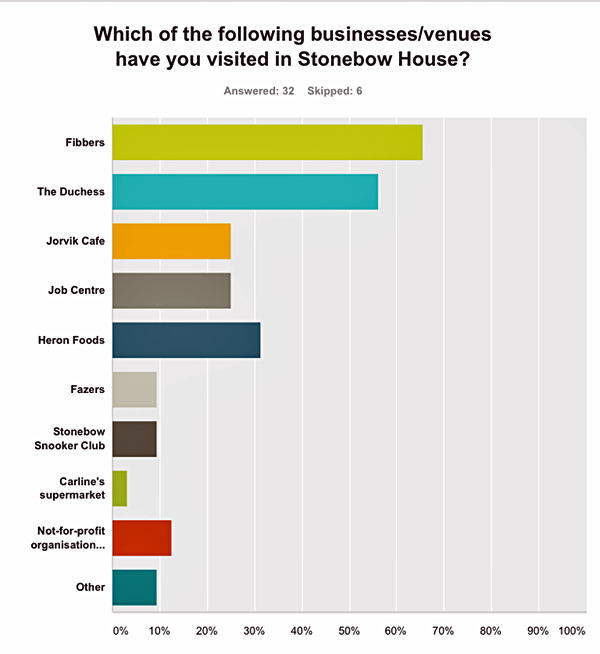 Other businesses mentioned, which I’d forgotten about or didn’t know about, were Harrowell’s Solicitors, a bus company’s offices, and also the Halifax Building Society (which of course not that long ago used to occupy the shop unit at the end where Heron Foods is now — funny how quickly you forget).

I hope the people who remember going to Fazer’s come back and add a comment telling us more about it. (I have a vague image, drifting in from the 80s, of a sign in the window in pink neon?)

I’ve often pondered whether we develop attachments to buildings because of what happens in them and in this particular case whether fond associations of happy events like going to gigs would mean a fond attachment to Stonebow House. So I thought I’d ask, as it seemed the ideal opportunity, whether it mattered much that Fibbers has moved to a different venue. The clear answer is ‘no’. It doesn’t matter, or not to the 21 people who answered this particular question. Although there is a bit of fondness for dear old grey Stonebow House, and a few people will miss going there. 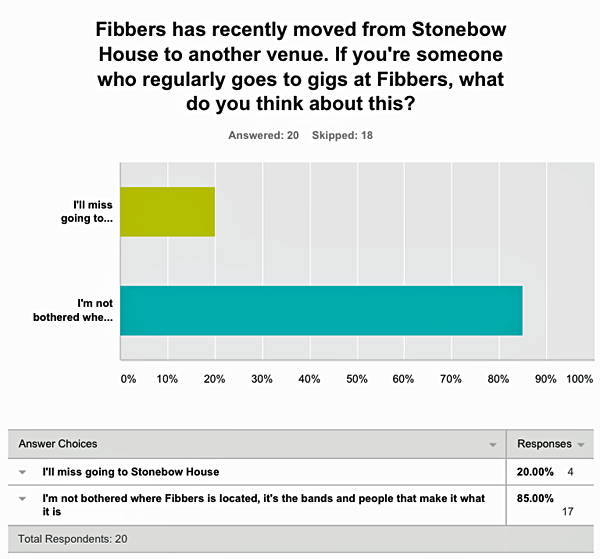 Survey: does it matter that Fibbers has moved?

On the Living with History site: the issues in depth

Helen Graham has written about the recent meeting to discuss Stonebow House and the various arguments for and against on the Living with History site. Very interesting and well worth a read whether or not you care about Stonebow House in particular, as it also discusses other issues of wider significance regarding our buildings and how we view them, how and where we discuss them, and whose views might be seen to hold the most weight.

As I mentioned in the survey, your thoughts were passed on to Helen. Many of the ‘describe Stonebow in three words’ answers were displayed at the event. Others are here on this site, where I made a poem from them, and see also all pages tagged ‘Stonebow’.

And a quick apology, and footnote

Question 2 in the survey asked where you’d read about the recent debates on Stonebow House, and mentioned various websites. It should, of course, have mentioned York Mix, as they’ve had many interesting articles on this recently, which I have read. Apologies to them for the omission, which was merely the result of compiling the list in a hurry.

That ‘where did you read about it’ list also showed that The Press in York (known as the Yorkshire Evening Press when Stonebow House was born) continues to be where most York folk read most things, as 59.46% of people had been reading its news and articles on Stonebow House, with the rest of us lagging behind by quite a long way. Though I was at 45.95%. But then this is my site, and you were probably all just being polite.

And have you ever …

I assumed most people would have gone up to the Stonebow car park at some point to have a look at the view. Apparently not: 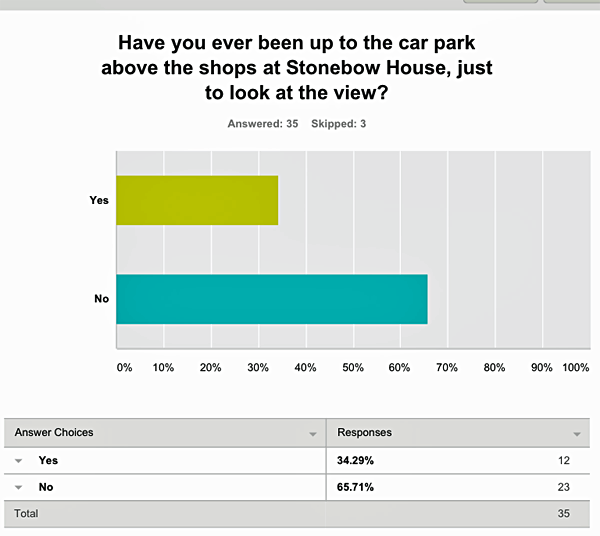 It’s not as impressive as the view from the top of the Minster, I admit. But then getting up there costs nothing, and is far less tiring. I have a couple of photos taken from up there in ye olde days of 2004, which I’ll be delighting you with shortly.

Want to escape from the environs of Stonebow House?

New ebook, by me: Chocolate and Chicory: York and beyond, by bicycle. An exploration of the local landscape, its stories and histories, via themed journeys along the cycle tracks outside the city walls and the country lanes beyond the ring road. Can also be enjoyed from the comfort of your sofa. Read more …