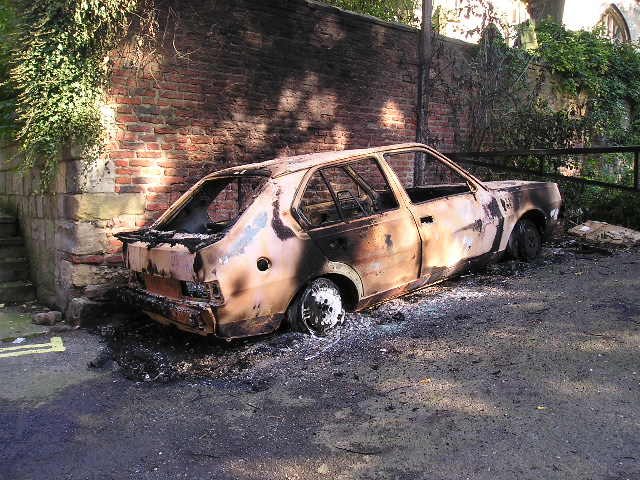 An incinerated car in York city centre, early one morning in August, ten years ago. In the heart of the city, not that far from the picturesque Shambles.

A surprising sight. But in its immediate context not that surprising, as it was behind the Stonebow building. It seemed to fit with the ‘Stonebow aesthetic’.

It makes me think of a line from a song by The Enemy: ‘burnt-out bins behind the station’ — which conjures images of urban grittiness and grubbiness — ‘burnt-out cars behind the Stonebow': York’s bit of urban dystopia.

Looking through the sequence of photos from that morning I can see that I’d walked into town at around 8.20am, taken photos on Gillygate, then photos of various buildings and details in the city centre. An hour later I was in St Saviourgate taking photos of the Unitarian chapel and its elegant Walker Foundry railings, immediately before nipping down the strange little stubby access road (a remnant of Hungate) behind the Stonebow.

The scene is always rather a contrast, and this morning it was particularly striking. I recall a pungent and sickly smell from the smouldering remains of the car. I took photos of the graffiti then thought I should record the car relic as further evidence of the proper urban grittiness round the backside of Stonebow. 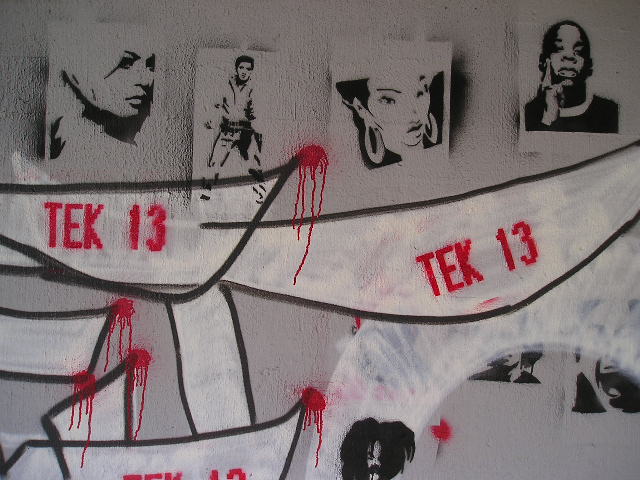 On the back of the building, that same morning, while the nearby car was quietly smellily smouldering, this graffiti. 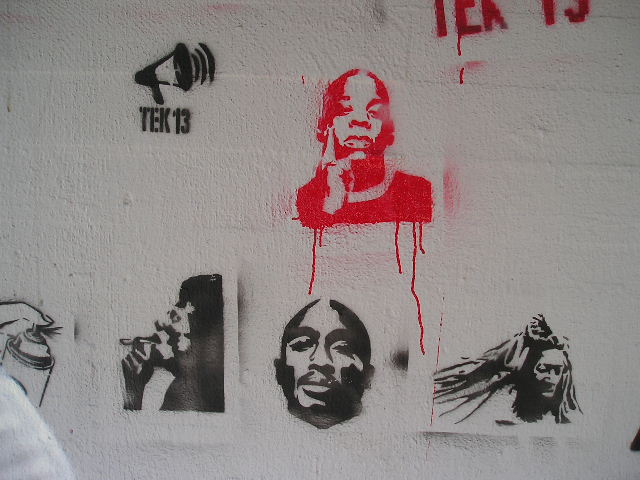 A minute later I was over the road back in normal picturesque York, in the narrow alley of Lady Peckitt’s Yard, having passed briefly through that other world, the backside of Stonebow. 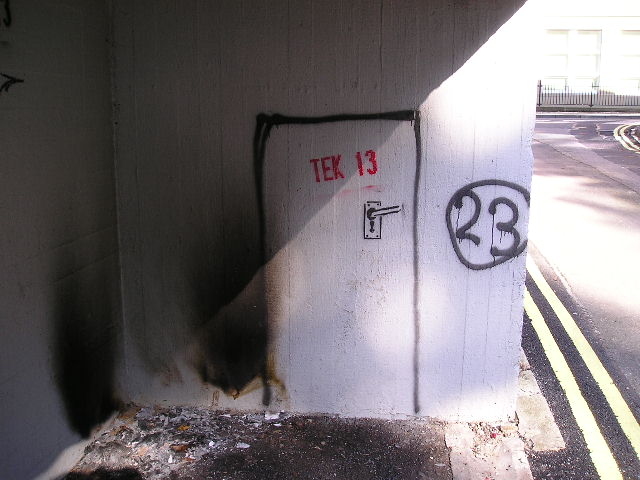 But wait, before we leave, more graffiti. An imaginary door, like the one I noticed once painted on a wall in Bootham Park. What does it mean? Why a door? I don’t know but I quite liked it. Let’s open a door on our thoughts about the Stonebow …

It’s easy to immediately dismiss the Stonebow, and most of us do. When I took my first tentative steps into this online record of real York, I was oblivious to its charms, and have recently found the evidence to prove it, while looking through some old files of the original ‘York Walks’. Here’s a screenshot of one of those venerable old web pages, from February 2004, with a confident condemnation of Stonebow House:

Many people will agree with this. And in that case, it has lost its one redeeming factor, as it no longer houses Fibbers. Fibbers has moved, as recently reported in York Mix. This seems rather significant.

Six months later I’d changed my view. I must have been so impressed with the burnt-out car and graffiti. I revisited the day after that and took photos from the car park platform above, then declared my love for Stonebow. Kind of:

“I’ve even started to think that the Stonebow building is quite attractive in its own kind of way. … It does look like it was plonked there with absolutely no regard for its surroundings. In that respect it seems kind of careless and modern, like we just stuck it there and didn’t give a damn. I quite like it for that, for being the spirit of an age. I would be sad, I realise, if they knocked it down now” 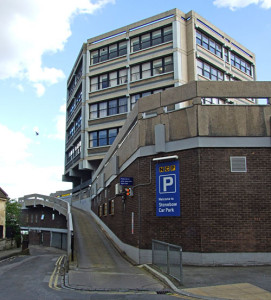 Then for the next nine years or so I didn’t think about the place much at all. Recently I’ve been thinking about it quite a lot. As perhaps we all should. It appears that the city council may be considering the possibilities of demolition of the building and redevelopment of the site.

The building doesn’t have many fans, and it was long ago decided in conservation statements for the city centre that it’s a ‘detractor’ on the city’s skyline. But many people think we should pay more attention to it and think carefully before we condemn it to demolition. Stonebow House is a small and interesting bit of what other cities were blighted by in a more wholesale way. It’s York’s message from the 60s, it tells a whole load of stories, but perhaps we’re blind and deaf to them.

The York: Living with History project is trying to uncover those stories, examine the histories and meanings of this building, and this is of course part of a wider debate on how decisions on our heritage should be made. An important debate, particularly in York, with so much pressure to build on the brownfield sites and to ‘reinvigorate’ anything looking a bit 1960s/70s, because it’s ‘dated’ at best, an ‘eyesore’ even.

York, as it’s a famously ‘historic’ city, needs to have interesting architectural examples of all periods. Stonebow House is the 1960s, isn’t it? Why do we hate it so much? The 60s were a happening time in proper cities with proper cool and relevant history, social history, all that stuff York seems to have been a bit blind to.

The Living with History project is holding another event this Saturday (26 July) at the Central Methodist chapel. I know many readers of this site might be interested in attending but won’t be able to make it, as I suspect I can’t. Following recent discussions about the project with Helen Graham we thought it would be nice to collect your views, dear readers.

So following on from the ‘one building’ survey (I haven’t forgotten that, and will be returning to it), here’s another survey: Stonebow House: your views

Please participate if you have views and opinions on Stonebow House. And I think everyone does, don’t they.

Helen Graham’s article in York Mix: Stonebow House: Locals have their say – ‘It’s about the content, what’s inside’ expanded the debate on the value of the building by examining its various uses

Jon Wright: Stonebow House: Why it’s an important building for York on the York: Living with History site (includes explanation of where the term ‘brutalism’ comes from)

Like all recent pages, this page was sponsored by a supporter of the site.