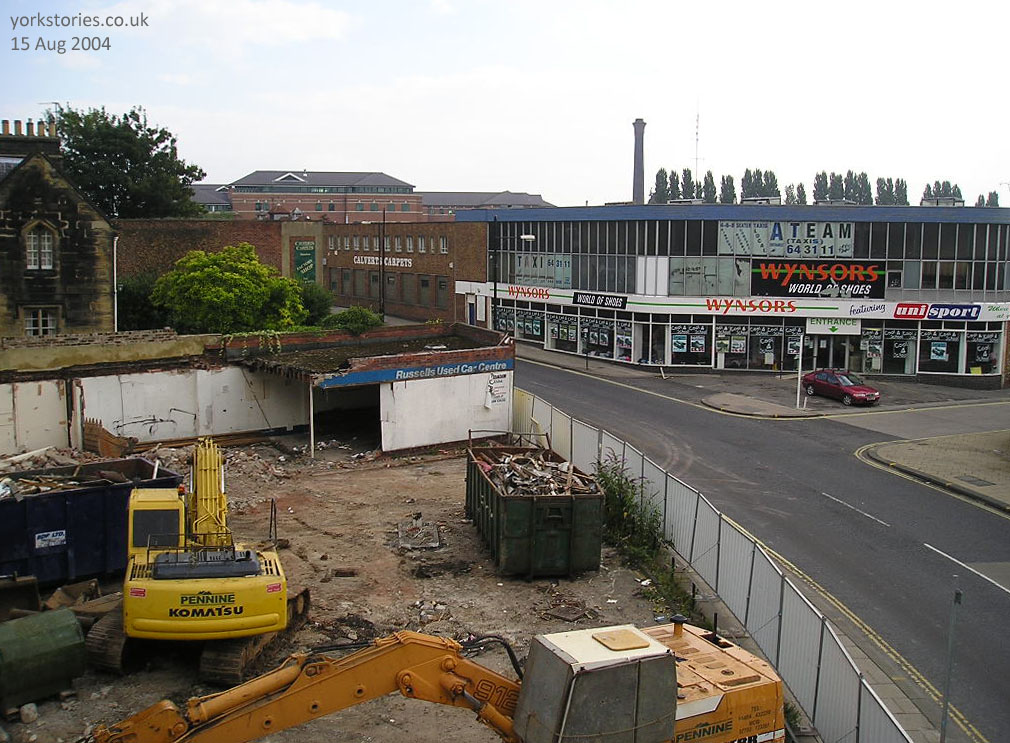 August 2004, from Stonebow House, looking along Stonebow towards Peasholme Green. Across the remnants of Russell’s Used Car Centre, towards Wynsors World of Shoes. A shabby-looking street by this time, but when it cut through the medieval street pattern and made a new way through from Pavement to Peasholme Green in the 1950s I imagine it was an exciting local happening, particularly for the small number of people who had a car.

I wish I’d taken more photos back then, that morning in August ten years ago. But then I couldn’t see ahead to how much it would change, and I didn’t know I’d still be doing this.

But I am, so here’s the same view today: 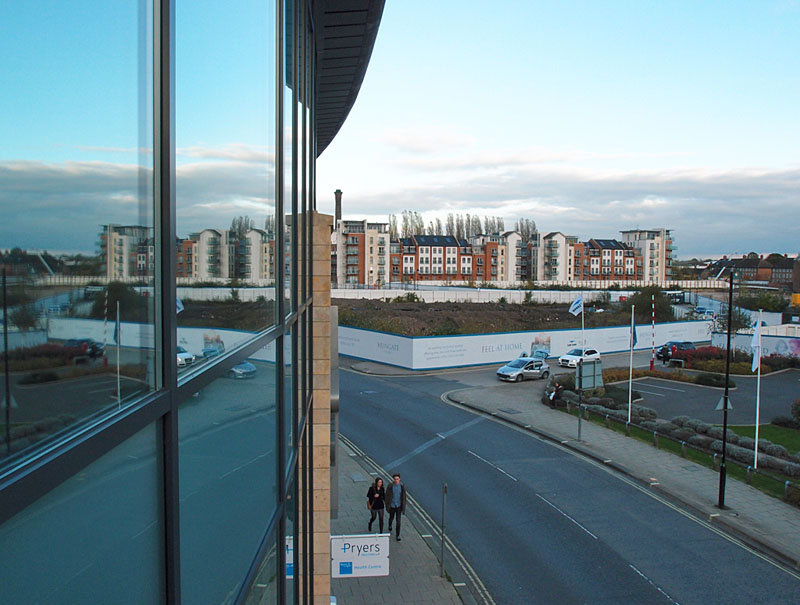 Well, the nearest I could get. There’s now a massive office block on what used to be Russell’s, and like everything built recently in the city centre it’s much taller than the low 20th century buildings. The new developments across the road are reflected in its windows, but it hides the happenings at the Hiscox site, which are moving on apace. More on that later perhaps.

And another from ten years ago, turning 90 degrees and facing the street of Stonebow, looking down Garden Place: 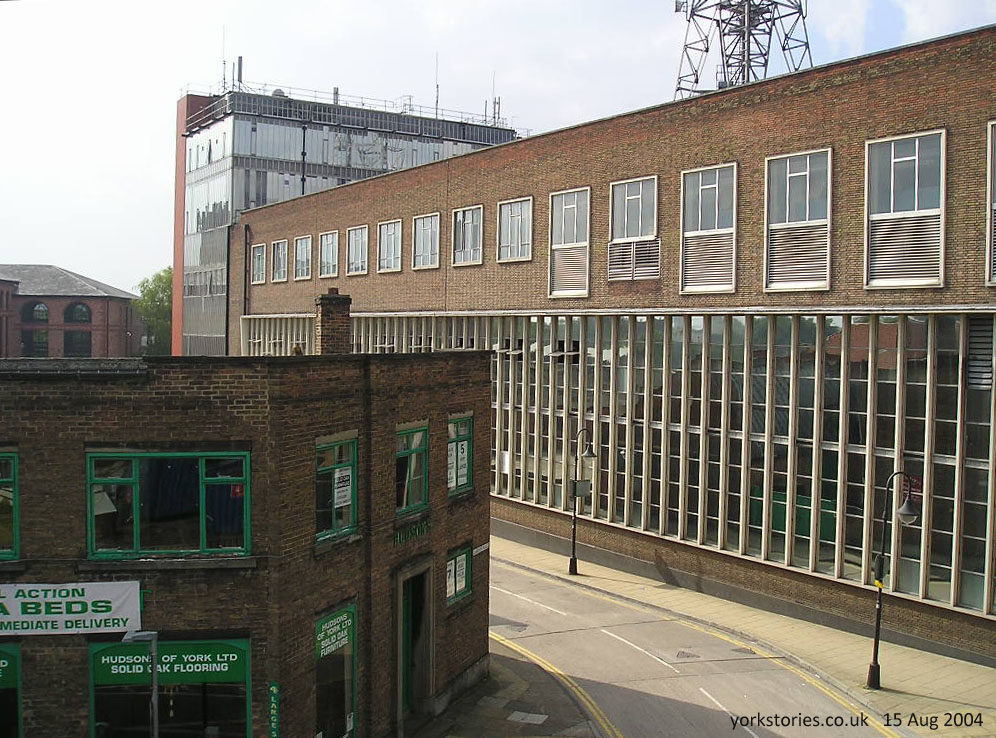 The telephone exchange on the right, and on the left another building demolished since as part of the redevelopment of the Hungate area. It sold furniture and oak flooring. Things now more usually sold from big boring sheds out on the outskirts of the city. 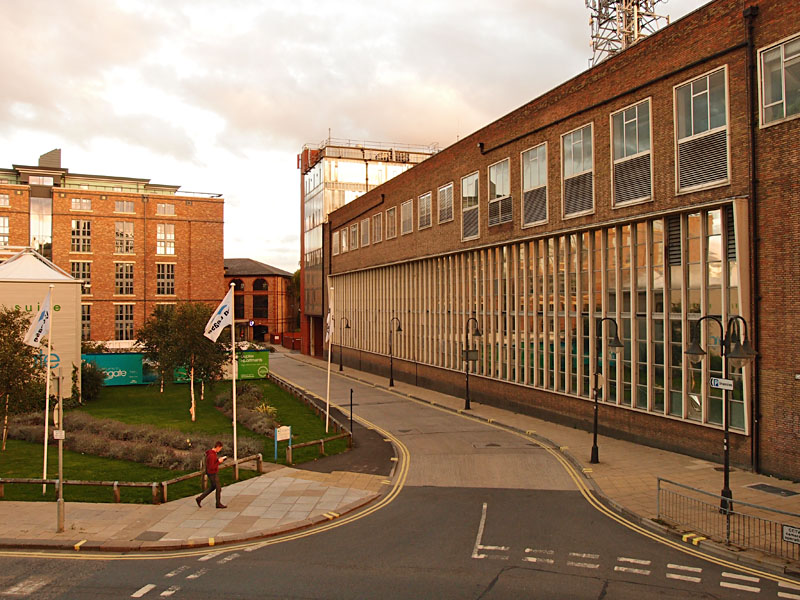 The old street name of ‘Garden Place’ looked a bit daft in 2004, as any gardens here were long gone, but for the last few years it has had one, as part of the marketing suite for the Hungate development. The lawn and flowers thing does look a bit incongruous opposite Stonebow House, in the middle of the city, but the planting is regularly refreshed and does its best to distract our attention from the grey concrete of Stonebow House, opposite.

Behind the marketing suite, the massive new block of student accommodation for St John’s. I have a lot of photos of this from different angles, as I was startled by the size of it, as it grew and grew. Just one of many blocks of student accommodation in the city. The student population used to be less visible, out at Heslington on the campus. That this building, St John Central, is so massive and so — well, central — illustrates one of the most dramatic changes in the city over the last ten years, the huge increase in the student population. Of which much more could be said. Later perhaps.

Google Street View can’t capture the same angles as the photos above as they were taken from Stonebow House, but if you’d like to have a virtual wander down the street, here’s the area as captured by Google. (Mainly for the benefit of my many readers overseas and elsewhere who can’t visit in person.)

I hope that displays for everyone as the Street View, which is currently showing the view in 2008. There’s a nice illustration of the changes in its transitions between images. If you move forward via the arrows you’ll see St John Central suddenly appear, as the next set of images recorded is from very recently, last month. If you keep moving forward down Stonebow to Peasholme Green you can see how work has begun on the Hiscox site, next to the Black Swan.

Lisa @YorkStories is the creator, administrator, and writer of content on www.yorkstories.co.uk. She can be contacted on this link or via Twitter, @YorkStories
View all posts by Lisa @YorkStories →
Tagged  2004-2014, Hungate, Stonebow
To link to this page's proper location please use the > permalink