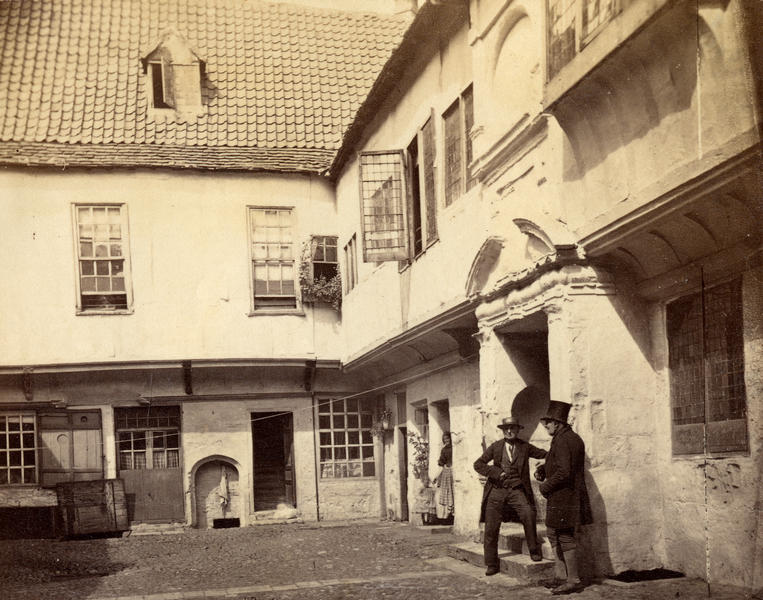 After yesterday’s December Daily I’ve been reading more of Nathaniel Hawthorne’s English notebooks, and this has led me into an afternoon of researching/reading, and gathering together, from online searching, some handsome old images, and a few thoughts (see below).

In 1857 Nathaniel Hawthorne paid another visit to York, again by train, after ‘a miserable hour in and about the railway station of Leeds.’

It then took ‘an hour or two’ on the train to get to York from Leeds. (Journey times are generally a bit shorter now, thankfully.)

Again the journal contains vivid and interesting descriptions of York as it was in the 1850s. On this visit he describes in some detail St William’s College, and the state it was in at that time.

We put up at the Black Swan, and before tea went out, on the cool bright edge of evening, to get a glimpse of the cathedral, which impressed me more grandly than when I first saw it, nearly a year ago. Indeed, almost any object gains upon me at the second sight. I have spent the evening in writing up my journal,—an act of real virtue.

After walking round the cathedral, we went up a narrow and crooked street, very old and shabby, but with an antique house projecting as much as a yard over the pavement on one side,—a timber house it seemed to be, plastered over and stained yellow or buff. There was no external door, affording entrance into this edifice; but about midway of its front we came to a low, Gothic, stone archway, passing right through the house; and as it looked much time-worn, and was sculptured with untraceable devices, we went through. There was an exceedingly antique, battered, and shattered pair of oaken leaves, which used doubtless to shut up the passage in former times, and keep it secure; but for the last centuries, probably, there has been free ingress and egress. Indeed, the portal arch may never have been closed since the Reformation. Within, we found a quadrangle, of which the house upon the street formed one side, the others being composed of ancient houses, with gables in a row, all looking upon the paved quadrangle, through quaint windows of various fashion. An elderly, neat, pleasant-looking woman now came in beneath the arch, and as she had a look of being acquainted here, we asked her what the place was; and she told us, that in the old Popish times the prebends of the cathedral used to live here, to keep them from doing mischief in the town. The establishment, she said, was now called “The College,” and was let in rooms and small tenements to poor people. On consulting the York Guide, I find that her account was pretty correct.

I wasn’t able to find photographs of the building from the 1850s — the earliest in the city archives online collection is from a bit later (see the top of the page). Another from the later nineteenth century shows the exterior and the streetscape around it, presumably similar then (before clearances of buildings to the right of the photo) as it was when our 1850s visitor visited. 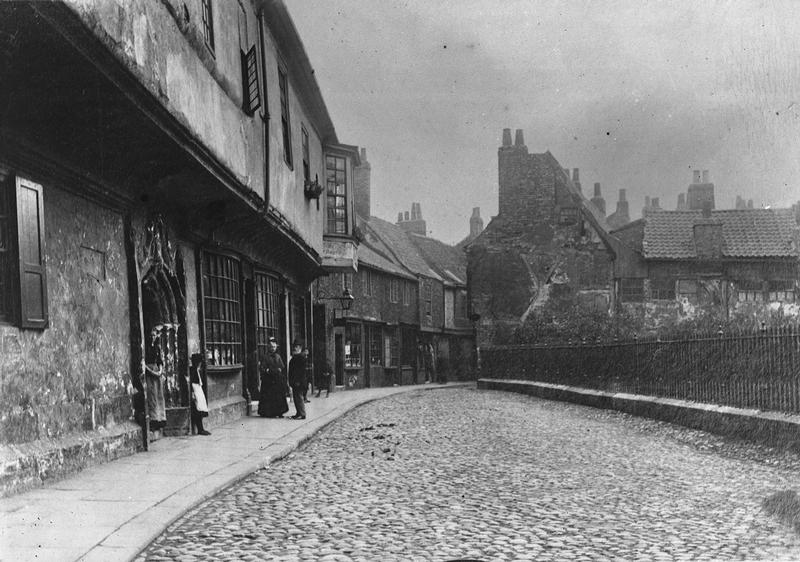 The building’s impressive doorways (one to the street, and one in the courtyard) were recorded by Henry Cave in the early part of the 19th century, and by photographers many decades later, before the building’s restoration in 1906. 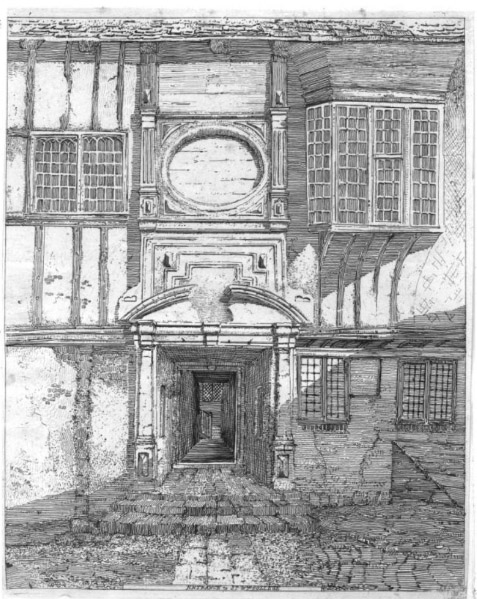 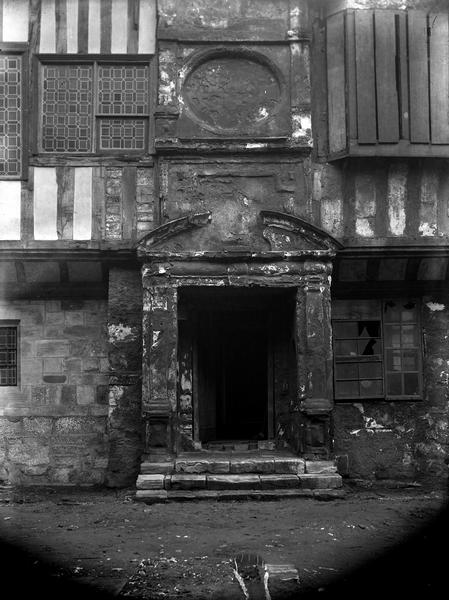 The most obvious difference in the intervening time (almost a century), is the blackened look of the stonework.

The main doorway, onto the street, was also recorded by Henry Cave, in the early years of the nineteenth century: 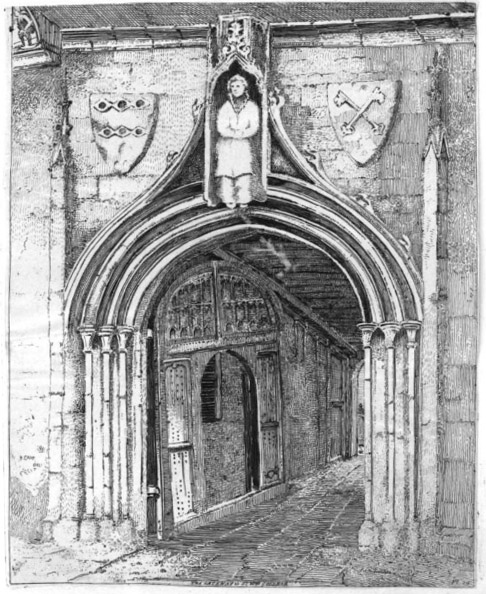 … And by a photographer around a century later: 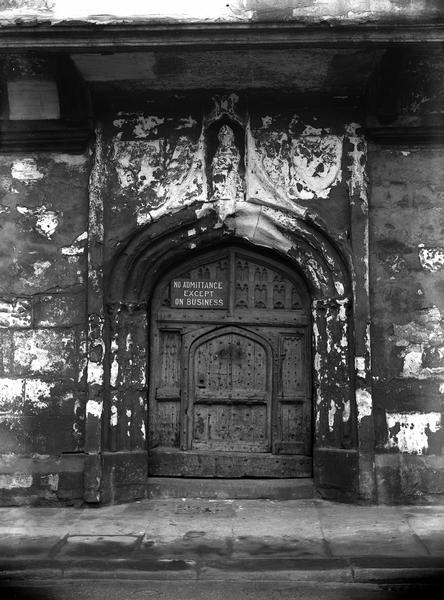 The main doorway to St William’s College looks nothing like that now, and is apparently a twentieth century recreation of the previous eroded stonework and detail. Something I wouldn’t have thought about if it wasn’t for the discovery of Nathaniel Hawthorne’s notebooks.

The building obviously has had a long and interesting history, and much of this is covered in detail in various sources, the conventional kind of history: establishment, church, rich families, etc.  Who inherited it, who they were related to. Generally mentioning only in passing, if it’s mentioned at all, how the building in its more dilapidated state for many years housed some of ‘the city’s poor’.

Another photo from the city archives, of the inner courtyard, is again from some decades after Nathaniel Hawthorne’s visit, but dates from the time before the building was restored, and presumably the ‘poor’ of the city were still occupying it. I had to include it, even though this page is quite long already, as to me it reminds us that the nineteenth century residents of the city weren’t just distant ancestors looking rather awkwardly at cameras when someone with a camera arrived. Here, in the courtyard, is a garden, made by someone, presumably just one of those ‘poor’ people. 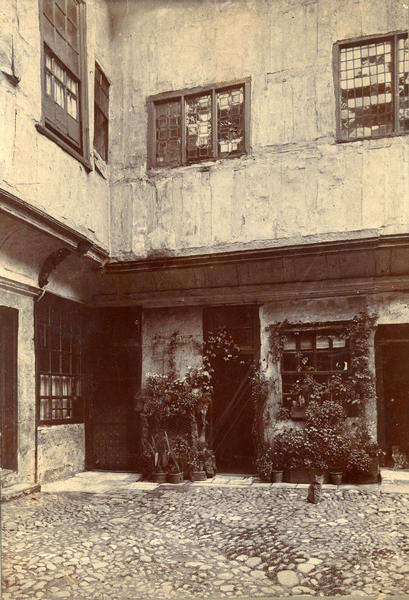 Perhaps on this occasion they were behind that plant-covered window, having made an impressive potted garden, neatly, in the space available. As many city dwellers try to do now.

Quite a garden there, clustered in the courtyard of the old St William’s College, while a cat on the cobbles perhaps shows some interest in the photographer.

Various references and links should probably be added in, but later, it’s been a long day of staring at the screen. The December Daily postings are chugging along nicely, thanks to Nathaniel Hawthorne’s fascinating work, and leading on in a pleasing way to other things, expanding. If you’re appreciating these daily postings, which I thought I’d do for various reasons (more here), I always appreciate your virtual coffees, (particularly at this time of the month when the payment for the monthly hosting bill leaves my bank account).