A fiddler on the roof, York Minster 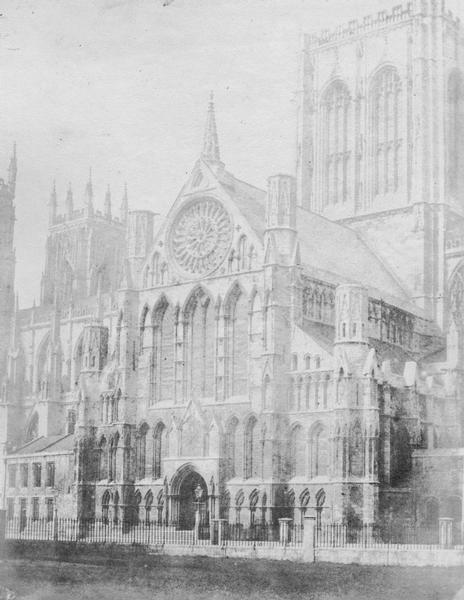 We returned to the front of the cathedral on our way homeward, and an old man stopped us, to inquire if we had ever seen the Fiddler of York. We answered in the negative, and said that we had not time to see him now; but the old gentleman pointed up to the highest pinnacle of the southern front, where stood the Fiddler of York, one of those Gothic quaintnesses which blotch the grandeur and solemnity of this and other cathedrals.

— wrote Nathaniel Hawthorne, during a visit to York in 1857. He’d just been to St William’s College, nearby (as discussed on yesterday’s December Daily).

On originally reading this, I assumed that the fiddler was some detail that is still there, on the exterior of York Minster. But apparently not.

Something I wouldn’t have thought much about if I hadn’t been looking for photographs from the 1850s in the online collection from the city archives. I found the photo above, and its accompanying information, which includes mention of the fact that ‘the pinnacle above the Rose Window (which was adorned with a statue of a man playing the fiddle) has been removed.’

I was rather curious about this. Clearly, back in 1857, the fiddler was seen as interesting enough to be pointed out by a friendly local to a visitor who was passing by, and he’s not just any old fiddler, he’s referred to as the ‘Fiddler of York’.

I thought I should try to find out more.

‘A little spiral turret, called the fidler’s turret, from an image of a fidler on the top of it, was taken some few years ago from another part of the building, and placed on the summit of this end, which has added much to its decoration.’
– (source here, and quoted in Notes and Queries, 1858)

A guidebook to York, published in 1857, refers to the fiddler figure in passing, in a description of the south transept:

the apex is surmounted by a small spire, commonly called the Fiddler’s turret, from a small effigy of a fiddler which crowns it. This effigy was removed from some other part of the building, and placed here.
– (source)

An earlier guidebook, by William Hargrove, published in 1818, also mentions this detail on the roof of the south transept:

The summit is crowned with neat and elegant turrets; on the centre one of which is the figure of a fiddler—that, however, is a singular accompaniment for a place of worship, and does not tend to increase the dignified appearance of the sacred edifice.
– (source)

Like Nathaniel Hawthorne, William Hargrove seems to have viewed the fiddler as rather offensive/inappropriate.

Also in agreement with that view is the author of ‘Browne’s New and enlarged guide for strangers and visitors to York Minster’ (?1870?):

the pinnacle, with the figure of a grotesque fiddler (instead of a cross) upon the top of it, placed there in the last century, is unsuitable to the solemnity of the style which prevails on the lower parts of the front.
– (source)

There’s some information available on the earlier history of the figure, why it was carved and why it was there in the first place, in connection with a former Archbishop of York, Lancelot Blackburne, apparently. But I’m more interested in when and why it was removed.

And here perhaps is the answer, in an extract from The Building News and Engineering Journal, Volume 26 (1874):

YORK MINSTER.— The restoration of the south transept of York Minster has been progressing slowly, but satisfactorily, for two years, and is now approaching completion, so far as the roof, the east and west clerestory walls, and the interior generally is concerned, little having as yet been done with the exterior. […] The erection of the parapet walls above the clerestories has been completed, and the cement gutters are being laid at the base of the roof on each side, preparatory to being covered over with lead. The pinnacle surmounting the south transept gable, and terminating with a fiddler, will shortly undergo restoration, in the execution of which the musician will be removed and replaced by a cross in harmony with the character of the architecture.
– (source)

The fiddler figure is still around somewhere inside the Minster, apparently, ‘on the wall of the South Quire Aisle of the Minster, and apparently has been there since 1946′, according to a mention in the archives of the York Press (18 October 2005). This was in answer to a query from a reader in Australia who was trying to find out the history of the York Minster Fiddler, as ‘she has an old door knocker with a fiddler on the front from the great cathedral’.

A search in Google Images provides many images of the York Minster fiddler, some in stone (presumably the original). It has also been represented in china, and indeed on a door knocker. Perhaps a few decades ago. Perhaps around the time that you could also buy cigarette lighters made from bits of Minster stone.

So Drake, writing in the eighteenth century, thought the fiddler on the south transept ‘added much to its decoration’. Several later observers clearly disagreed. But after the removal, there was enough interest left in the figure of the fiddler for it to be reproduced in items for sale, a memento of the Minster.

As always, there’s a whole other layer or several that I could go into, but this daily posting thing means sticking to deadlines and word limits, particularly now it’s so late it’s nearly into the next day. But it’s like that, York, isn’t it.  So many stories, so many layers.

This is December Daily number 15. If you appreciate this month’s mix of new things, old things, York things large and small, then virtual coffees are welcome, thank you.