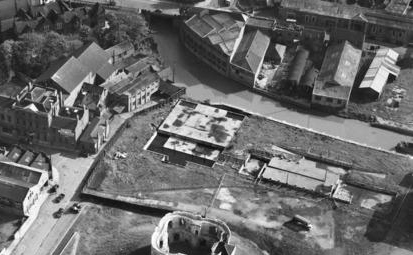 Top right, part of Piccadilly, 1947 (Photo: Britain from Above)

Yesterday’s page featuring Foxton’s on Piccadilly prompted a reader to contact me with memories of a nearby building:

“Your latest on foxtons garage, sent my memory straight back to WW2 and my enforced visits to the free clinic which existed in a large, stilted wooden pavilion sited just between foxtons and the parliament street end of piccadilly. It existed to cater for medical needs, like treatment to teeth/ears/eyes etc for folk of low income unable to afford doctoring in those pre NHS days. I got my ears syringed and fitted with those awful spring steel john Lennon” type glasses earning the nickname of “four eyes” for the whole of my Nunthorpe grammar school days.

I have never found any allusion to the place while trolling through versions of york modern and wartime history, and I suppose memories of it will only exist with those of my generation.”

I’ve done my best to find more information on the clinic in Piccadilly, but haven’t found much. No photos so far, but a few mentions of it.

It maybe needs emphasising, as mentioned above, that we’re talking about healthcare before the NHS existed. It’s easy to forget that the NHS hasn’t always been there. Maybe we take it for granted if we’re of the generations born after it was in place, and until we really need it.

Anyway, a book I’ve found very helpful before included some information on the school clinic:

‘York’s first school clinic had been opened in 1908 at 24 St Saviourgate, under the Education Authority’s school medical officer, who was also the city’s medical officer of health. The clinic offered a range of medical and monitoring services, including dental, ear nose and throat, and ophthalmic clinics, for schoolchildren. Its staff of school nurses and doctors oversaw the medical inspection of children in schools. In 1920 the clinic moved to premises in Piccadilly, and thereafter to premises in Rougier Street whence it moved to Monkgate.’

A ‘Scheme of Education for York’, a document from City of York Education Committee, dated 1921, has a brief mention of the school clinic:

So for a time at least the clinic was in an army hut (First World War). But on which site exactly? And does anyone else remember it?

One of the aerial views from the 1940s/50s I’ve included before in a page about York Castle/Cliffords Tower, and part of which is included above at the top of the page, has what is probably the relevant part of Piccadilly in the background, and on the cleared site to the right of Foxton’s garage (recently cleared again) there is a building that looks like it could be a First World War hut, possibly.

I went off to read more about First World War huts. Very interesting. Then thought I’d leave this information here as it is, and it might be added to at some point. Like the page about the Fever Hospital, from some years ago.

Your virtual coffees support this site, and recently have helped to pay the hosting fees to keep it online for so many years. Thank you.